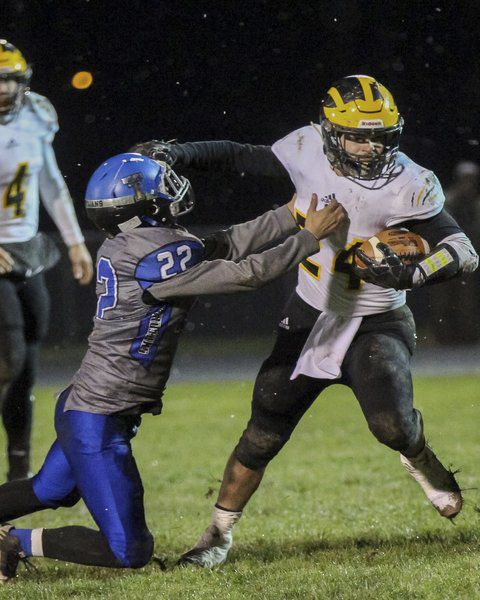 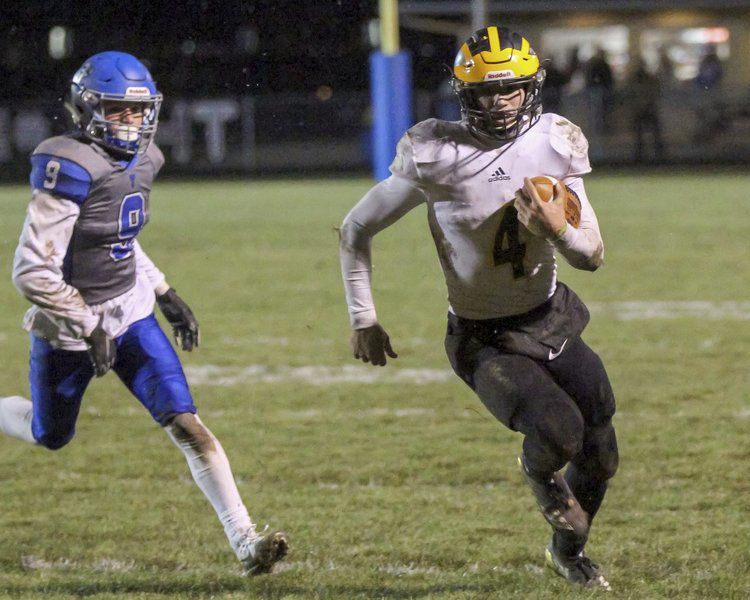 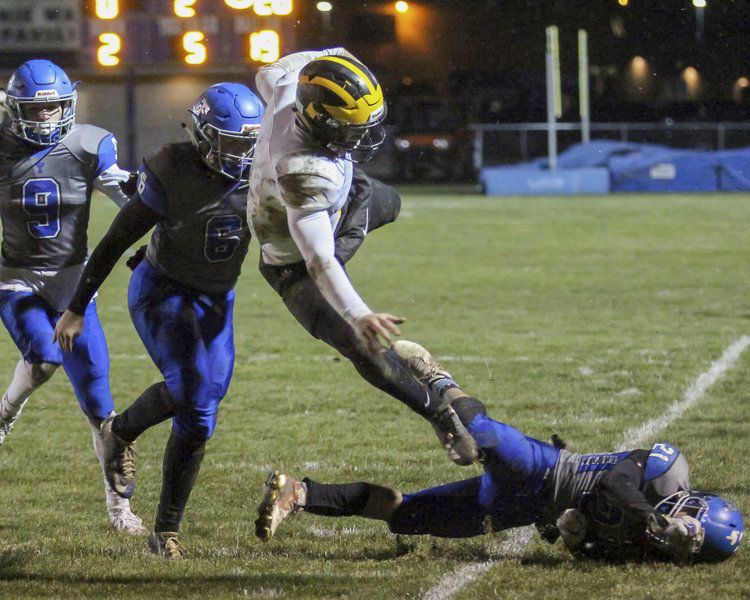 Jack Kiser is knocked out of bounds after a gain on Friday night. Bud Dodrill | For the Pharos-Tribune 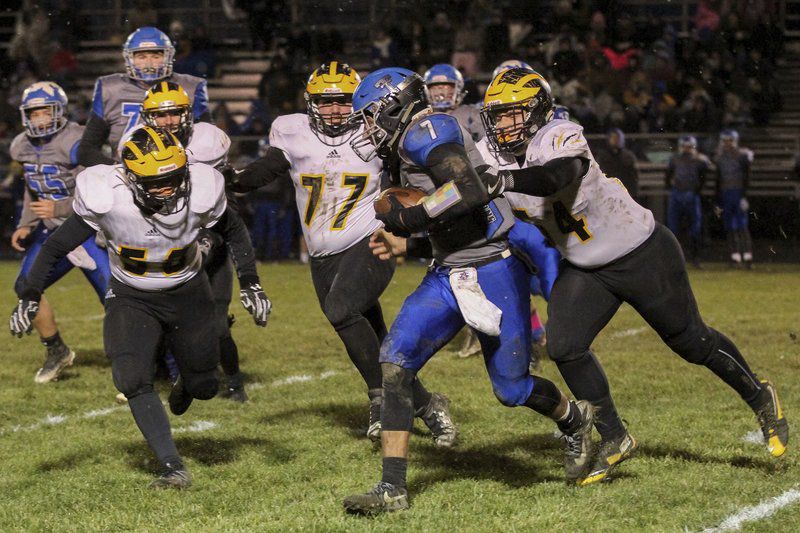 Jack Kiser is knocked out of bounds after a gain on Friday night. Bud Dodrill | For the Pharos-Tribune

BOURBON — The Triton Trojans are a good Class A football team. They’ve set a program record for wins this season and have some standout players.

But they were no match for the machine that is known as Pioneer football on Friday night. The No. 1-ranked Panthers steamrolled the Trojans 66-0 to win their third straight regional title.

It was the Panthers’ (13-0) fourth regional title in the last five years and seventh overall. After winning the state title last year, the regional win has them moving up to Class 2A the next two years.

The victory also has the Panthers headed into a semistate showdown with No. 2 Adams Central (13-0) next week, which the Panthers will host.

The weather conditions Friday night weren’t favorable for the Panthers, as there was a 19-degree wind chill with a 15 mph wind blowing straight at their sideline and fans. But it turned out to be Pioneer weather. The Panthers are well adept at playing football deep into November throughout the years.

The Panthers were once again relentless. It was another week where the opposing team had difficulty even getting a punt off against them. The Trojans (9-4) found themselves in a 14-0 hole before they even had their first offensive possession.

The Trojans didn’t help themselves by fumbling seven times, losing three of them, including on their first kickoff return of the game. They also threw an interception at was picked by Ezra Lewellen. They also had a failed fake punt. They also had a punt blocked by Derek Wireman.

Pioneer’s offense was once again methodical and explosive. The Panthers’ first drive was 11 plays, 75 yards that took nearly seven minutes off the clock. They later showed how explosive they can be, scoring 32 points over the final 6:03 of the third quarter. The only time they were stopped was on a lost fumble in the second quarter.

Jack Kiser rushed for 105 yards and three touchdowns on 16 carries. He also threw for a pair of touchdowns and capped off the scoring with a 60-yard fumble return for a touchdown.

Danny Gregorich ran for 103 yards and three touchdowns on 13 carries.

Dustin Sparks caught a 7-yard TD pass and Addai Lewellen had a 12-yard score on a shovel pass. He also had 91 yards rushing on just two carries.

Miles VonTobel was seen making plays all over the field in all three phases. Conner Walker had a pair of sacks.

Triton entered having passed for over 1,800 yards this season but was held to 18 yards passing on 16 attempts.

Pioneer led 34-0 at halftime. Triton’s best chance for a touchdown came early in the third quarter when speedy Delano Shumpert got the ball on a reverse and had two blockers in front of him with only one man to beat. Unfortunately for him it was Kiser, who shoved aside a blocker and made the tackle after a 55-yard gain to the 20-yard line. Pioneer’s defense was able to hold from there.

Later in the quarter Kiser simply just took the ball away from a Triton ball carrier and raced 60 yards for a touchdown to cap off the scoring.

How loaded are the Panthers this year? They potentially have at least four Division-I level players in their starting backfield. Mike Johnson built the Pioneer program into a monster but it takes talent as well as hard work to be as good as the Panthers have been over the last two decades.

Gregorich is one of those talented players that could play football at a high level. But he said he’s not a big fan of school, so he plans to enter the workforce following graduation.

He noted the amount of talent going through the school in multiple sports.

Kiser added the athletes are all from the Pioneer school district.

“We don’t get move-ins. This is Royal Center community upbringing, so you’ve got to be proud of that,” he said. “We’ve got a pretty good [sized] school district but it’s a lot of farms and drawing in from little townships, so to have this type of talent all-around in different sports is pretty special.”

Gregorich might not like school, but he loves the gridiron. He calls out the defensive play calls for the Panthers.

“Sometimes school is not for everybody, and there’s nothing wrong with going right into the workforce,” Pioneer coach Adam Berry said. “He’s a smart kid and he’s going to be successful after school.”

Kiser added, “Danny has a motor and he gets after it, and he’s not fun to go against. So, yeah, he’s pretty talented.”

The Lewellen twins were also making plays all over the field in all three phases. Ezra had three 2-point conversions and VonTobel and Calahan Kindley also converted on tries.

It looks like next week the Panthers will face their biggest challenge of the season, maybe by far when Adams Central visits. John Harrell’s computer has the Panthers as having a 1 in 3 chance of losing the game and expects it to be close.

Cree, Robert “Bob” G., 72, of Lucerne, a celebration of life will be held at 1 p.m. today, at Gundrum Funeral Home & Crematory, with Pastor Kenneth Smith officiating. Burial will follow in the Zion Methodist Cemetery, Lucerne. Visitation will be held from 11 a.m. until the time of servic…

Cree, Robert “Bob” G., 72, of Lucerne, a celebration of life will be held at 1 p.m. on Saturday, Nov. 28, 2020, at Gundrum Funeral Home & Crematory, with Pastor Kenneth Smith officiating. Burial will follow in the Zion Methodist Cemetery, Lucerne. Visitation will be held from 11 a.m. unt…

Bookwalter, Arlan E., 78, of Walton, graveside services will be held at 2 p.m. today at Walton IOOF Cemetery, with Pastor Doug Thomas officiating. Due to the COVID -19 pandemic, face masks are required if attending services. Murray Weaver Funeral Home in Galveston has been entrusted with arr…