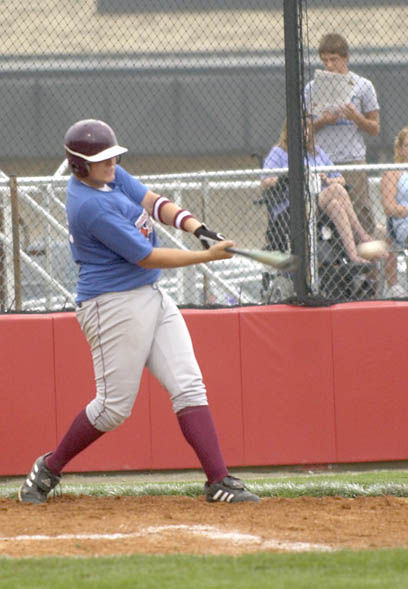 Winamac’s Matt Garling connects with a pitch by Kokomo’s Bryce Robinson for a single in the top of the second inning at the second annual Pharos-Tribune/Kokomo Tribune All-Star game at Lewis Cass High School on Wednesday. The two teams tied 6-6 at the rain-shortened game. (Pharos-Tribune photo by Angi Turnpaugh). 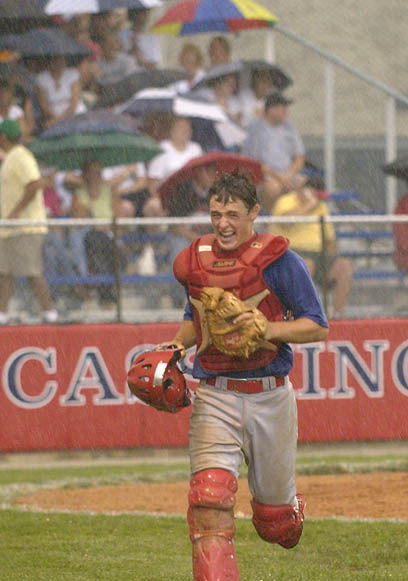 Logansport’s Grant McCloskey heads to shelter during the downpour at the end of the fifth inning at the second annual Pharos-Tribune/Kokomo Tribune All-Star game at Lewis Cass High School on Wednesday. The game ended in a 6-6 tie after play was halted due to rain. (Pharos-Tribune photo by Angi Turnpaugh). 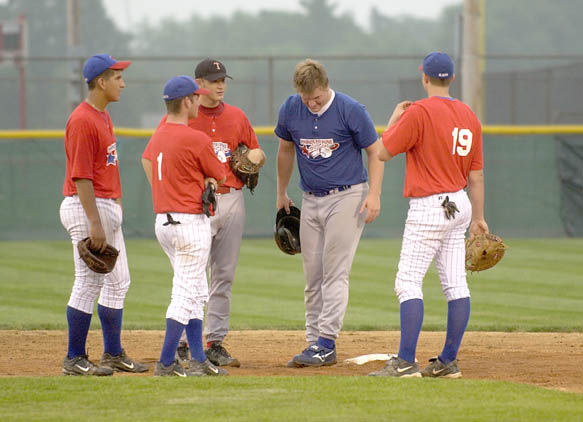 Logansport’s Kory Rombold chats it up at second base with several Howard County All-Star infielders during a break in the action at in the fourth inning. (Pharos-Tribune photo by Angi Turnpaugh).

Winamac’s Matt Garling connects with a pitch by Kokomo’s Bryce Robinson for a single in the top of the second inning at the second annual Pharos-Tribune/Kokomo Tribune All-Star game at Lewis Cass High School on Wednesday. The two teams tied 6-6 at the rain-shortened game. (Pharos-Tribune photo by Angi Turnpaugh).

Logansport’s Grant McCloskey heads to shelter during the downpour at the end of the fifth inning at the second annual Pharos-Tribune/Kokomo Tribune All-Star game at Lewis Cass High School on Wednesday. The game ended in a 6-6 tie after play was halted due to rain. (Pharos-Tribune photo by Angi Turnpaugh).

Logansport’s Kory Rombold chats it up at second base with several Howard County All-Star infielders during a break in the action at in the fourth inning. (Pharos-Tribune photo by Angi Turnpaugh).

By JAMES COSTELLO Pharos-Tribune sportswriter WALTON — Everyone was waiting to find out who’s better — Howard County’s baseball talent or Loganland’s. A good crowd turned out for the second annual Pharos-Tribune/Kokomo Tribune All-Star game at Lewis Cass High School on Wednesday night for the opportunity to see the best players from two areas swelling with baseball prospects. The answer to their question? Neither team. That was the answer that the scoreboard reflected when the rain set in to halt play in the top of the sixth inning, as the score remained knotted at 6-6 after five full innings of play between the two dream teams. Without a doubt, however, the MVP of the game went to Kokomo’s Bryce Robinson, the Howard County Player of the Year who only just finished his sophomore year of baseball. In the field and at the plate, the young Robinson managed to outshine a prodigious field of bright young stars. “He was our ace last year as a sophomore, and he’ll be our ace this year,” said Kokomo head coach Steve Edwards, who was chosen by the Kokomo Tribune to skipper the Howard County All-Stars. “He’s a stud. Bryce has grown up a lot in the past few years, and we’re really excited about what he’s going to do. He’s a great kid, a great teammate, and he just soaks up everything everyone tells him.” Robinson opened up for Howard County on the mound and gave Loganland problems from the get go. He gave up no runs and only one walk in three innings pitched. The strikeout artist also fanned eight Loganland batters with an untouchable fastball, including three strikeouts in the third frame alone. In fact, the only hit Robinson gave up was on a breaking ball in the top of the second. He ran up two fastball strikes on Winamac’s Matt Garling, who wisely predicted the breaker on the 0-2 count and nailed it through the infield gap for a single. Lewis Cass’ Brad Piatt was the only other Loganland player to connect on Robinson, as he returned a high bouncer to the Howard County pitcher in the opening frame to reach first on a tough error. But Robinson’s talents weren’t confined to the hill, either. After Western’s Chris Miller led off in the second against Loganland starting pitcher and Player of the Year, Kory Rombold of Logansport, Robinson managed to come around early on one of Rombold’s blistering fastballs to rip a perfect standup double down the first-base line and deep into the outfield. The hit put two runners in scoring position for Kokomo’s Andrew Quinnette, who lined to right center to score two, despite a nice running scoop and throw by Caston’s Matt Turnpaugh. “It was a low fastball inside,” said Robinson with a smile. “We used to face each other in (Babe Ruth), and we know each other very well. There’s a fierce rivalry between Logansport and Kokomo.” Robinson also got the chance to face Rombold in a high school game last season in which the Berries’ pitcher threw a perfect no-hitter against the Wildkats. “Rombold threw great against us in the first game,” said Robinson. “I kind of wanted to face him.” Loganland went down in order in the top of the third, and Howard County threatened in the next inning with runners on first and second and only one out. But Rombold saved the team along with Carroll’s Greg Manning, who scooped a nice catch for an automatic out at third to hold the score to a 2-0 Howard County advantage as Loganland returned to the plate in the fourth frame. Kokomo’s Jordan Kucholik struggled on the mound in the inning, walking in three Logan runs with the bases loaded before being relieved by Quinnette. Turnpaugh crushed a shot to deep right center for a standup double and two more Loganland runs. Garling accepted a sacrifice out to score Logansport’s Grant McCloskey before two ground outs retired the side, and at the end of the costly frame, Howard County found itself facing a 6-2 deficit. Piatt relieved Rombold in the fourth, but fatigued from the North-South Indiana All-Star four-game series over the weekend, the senior found himself in trouble early. A Miller fly and a Robinson sacrifice line shot scored two Kokomo runs in the bottom of the fourth. Later, Northwestern’s Alex Ridlin connected with what appeared to be a check swing on a hanging break for a two-RBI double. Logansport’s Kyle Corcoran made a beautiful throw home from center to McCloskey, but it was just a little too late as the tying run scored. “Piatt was tired,” said Lewis Cass head coach and Loganland Coach of the Year, Greg Marschand, who has coached the recent graduate for the past four years. “He had thrown 130 pitches just Sunday, and he was gutting it out out there, trying to help his team. I appreciate his gutsy performance. His arm wasn’t good, his legs weren’t good, but he gutted it out and I’m real proud of him for it.” The score remained tied 6-6 through the fifth inning before the rain began to pour in the top of the sixth, sending fans scurrying for cover. Some players were disappointed with the ambiguous outcome and wanted to wait out the rain, but with home plate under two inches of water, the skies threatening more rain for the remainder of the night and the possibility of injury for players with such promising futures in the game, play was terminated for good. “Weather’s part of the game,” said Edwards. “It’s an all-star game — we go five innings, we go nine innings we might still get a tie. We’ll play again next year. We had a great game. The clinic we had before the all-star game — we had 65 kids turn out — went great. Two years in a row we had a great turnout and Lewis Cass does a great job at hosting it.”

Michelle Lynn Clary, Logansport, passed away in the comfort of her home on Thursday, April 15, 2021, at the age of 33. Arrangements are pending. The complete obituary is available at www.kroegerfuneralhome.com.

Shaw, Irene F., 91, of Logansport, a funeral service celebrating Irene’s life will be held at noon today at Fisher Funeral Chapel, with Pastor Adam Speicher officiating. Interment will follow in the Ever Rest Memorial Park. Friends will be received one hour prior to the service in the funera…