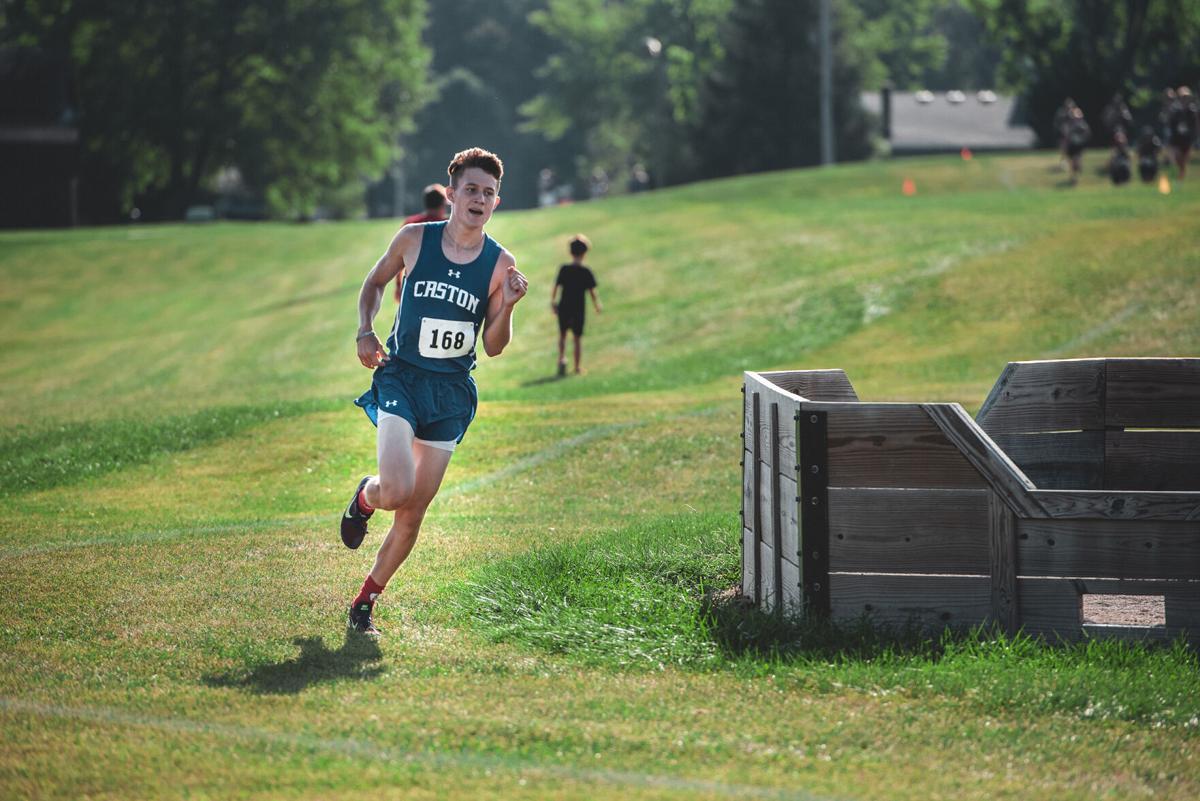 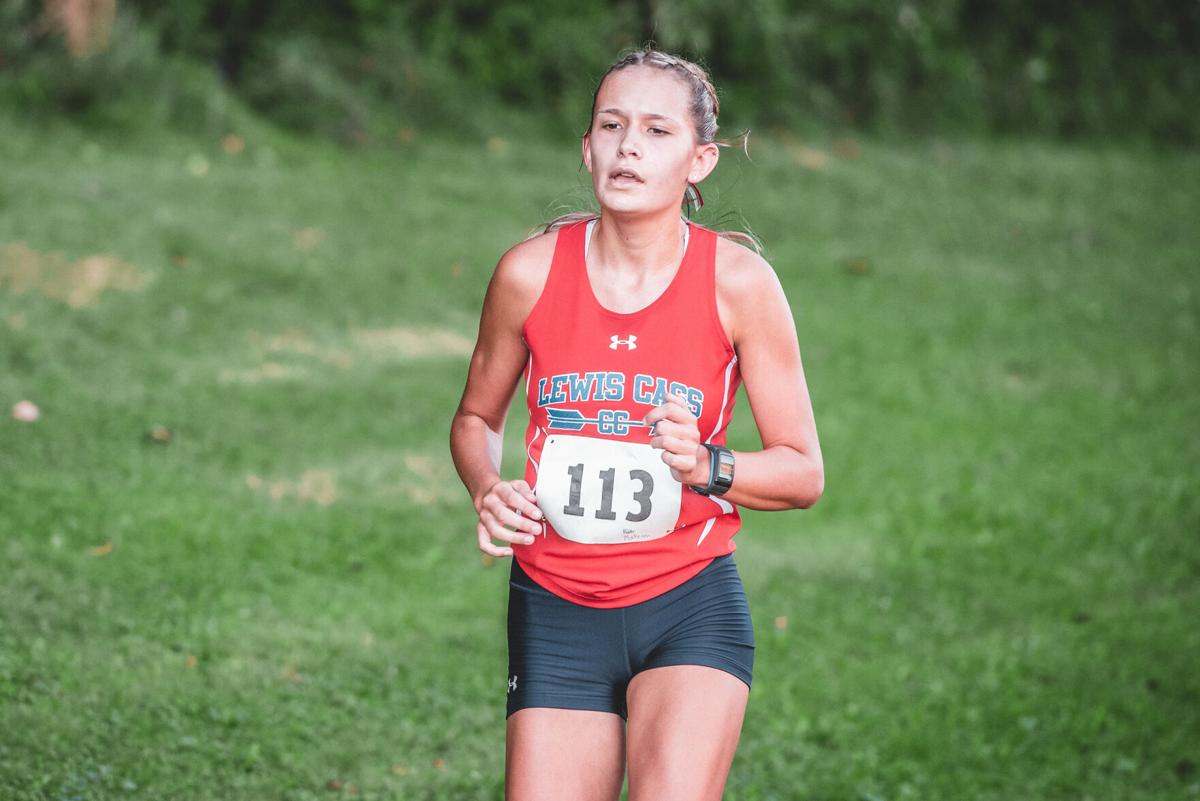 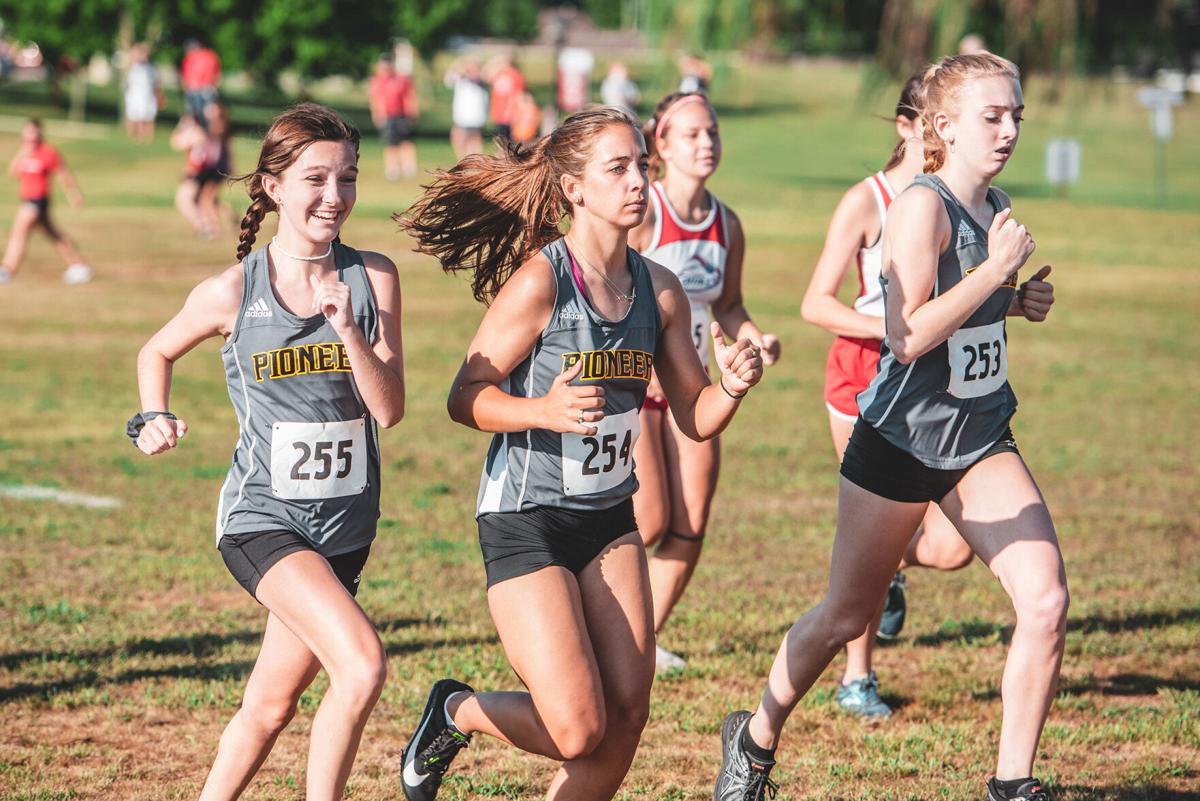 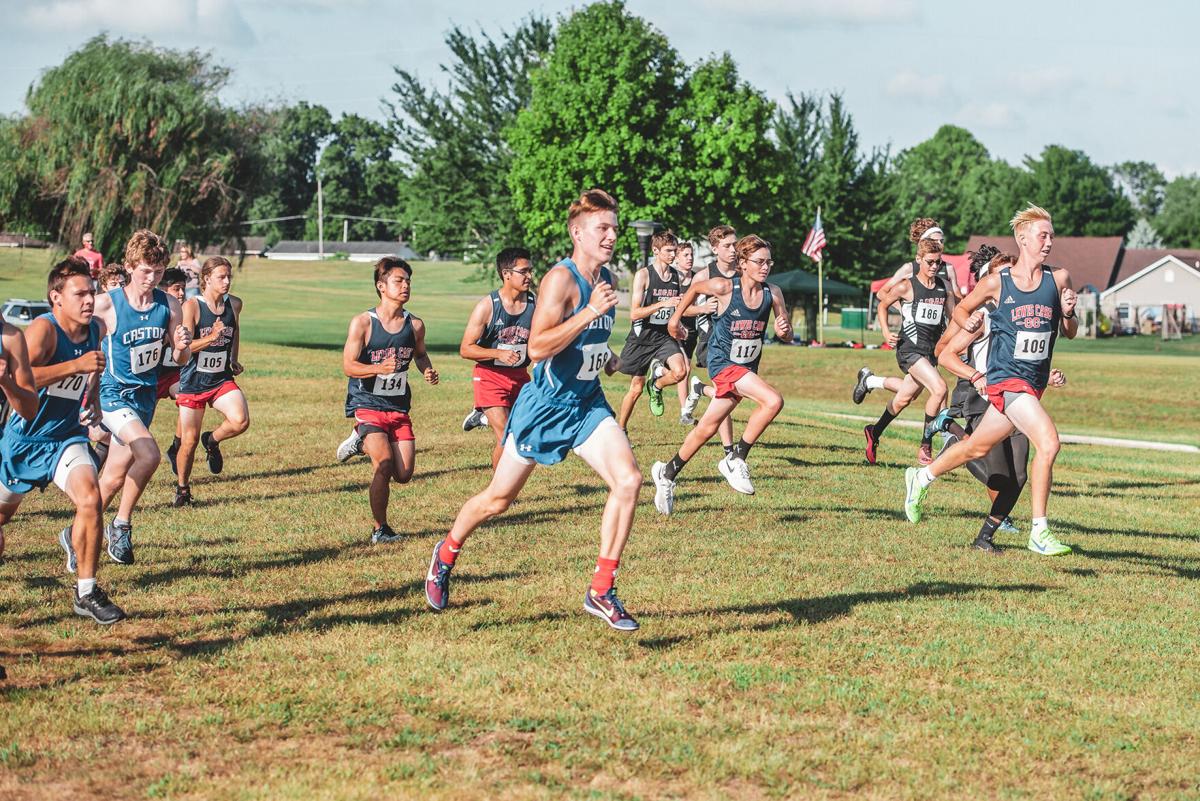 Boys cross country runners compete at the start of the race on Saturday. 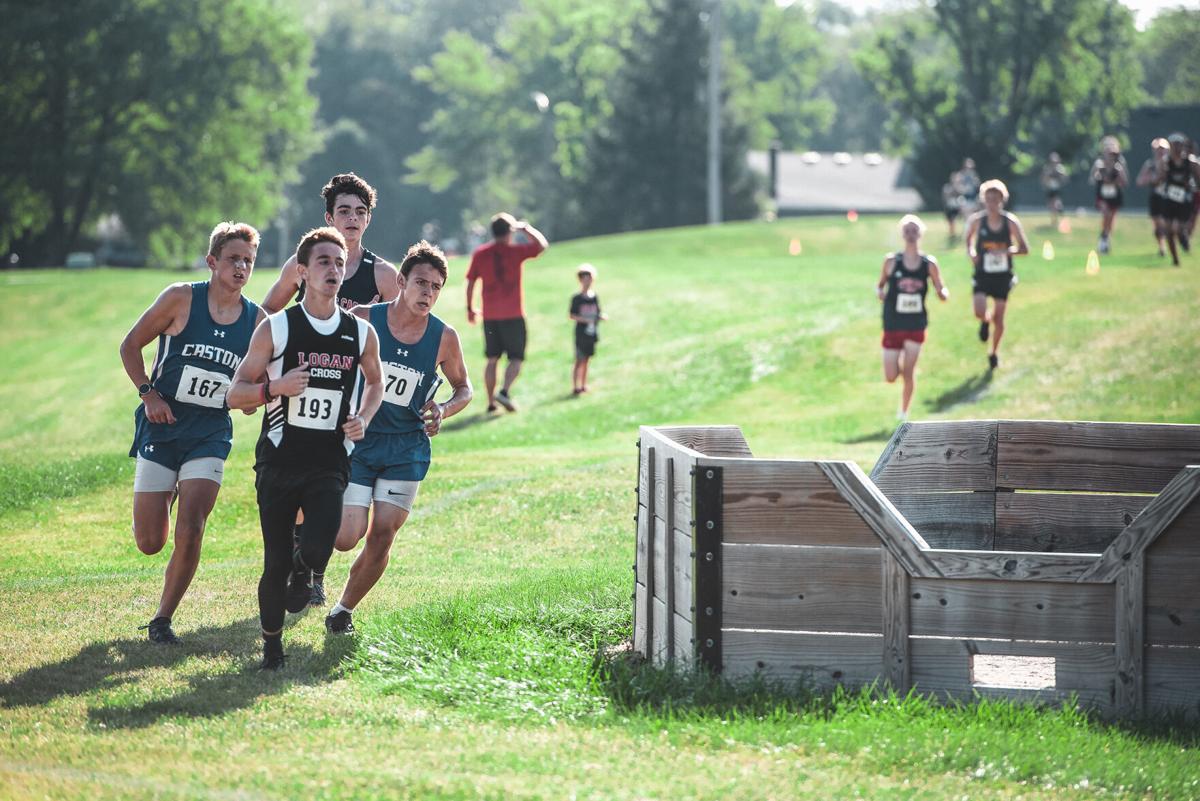 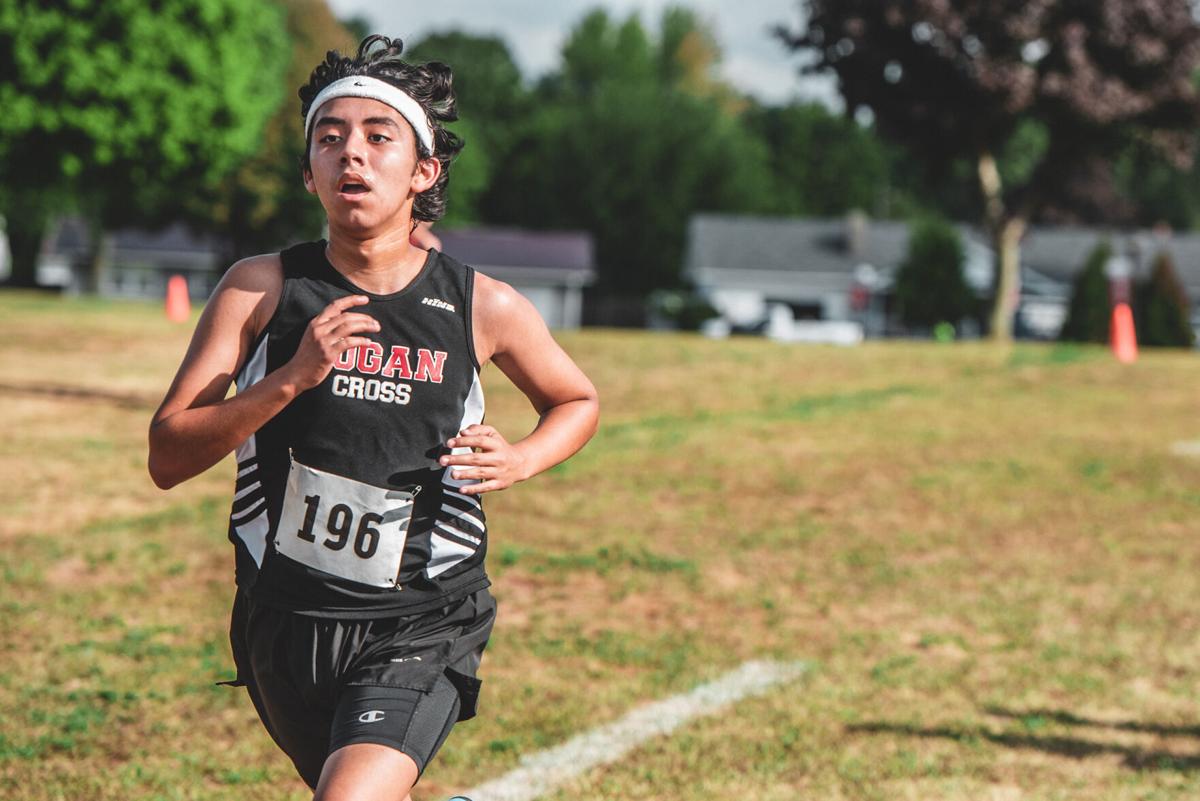 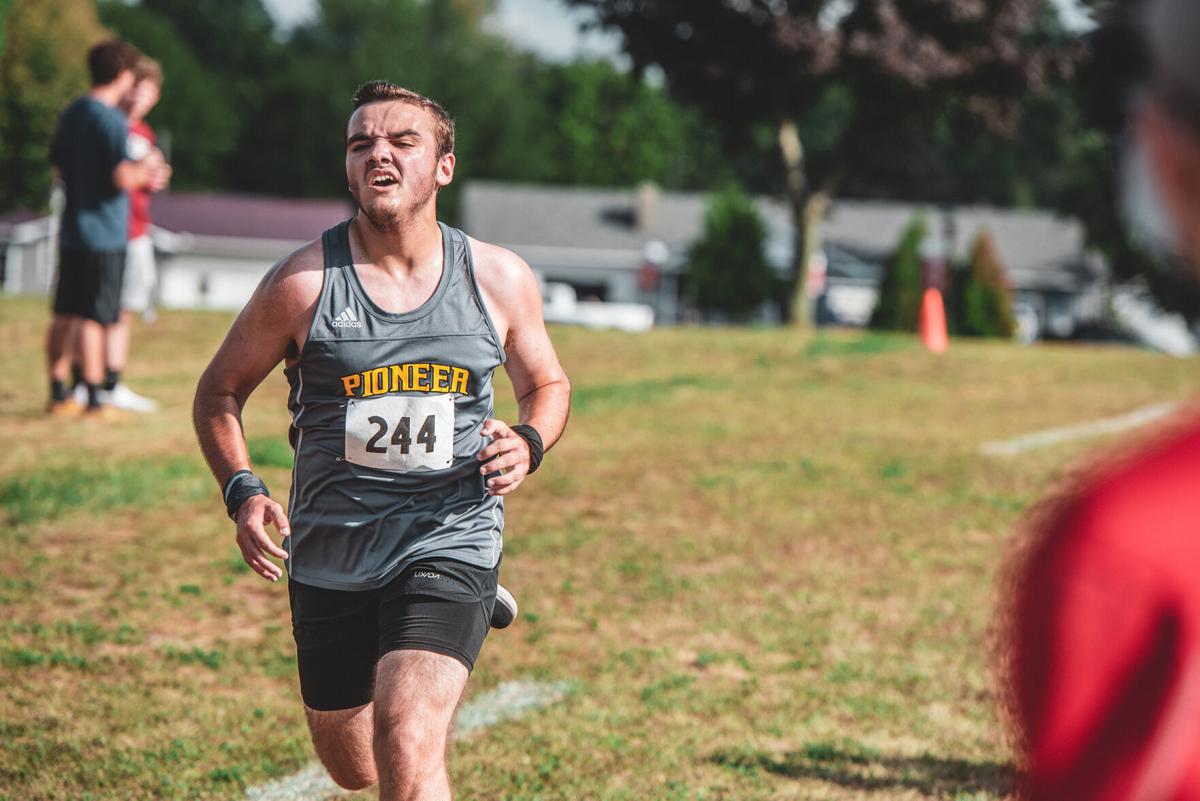 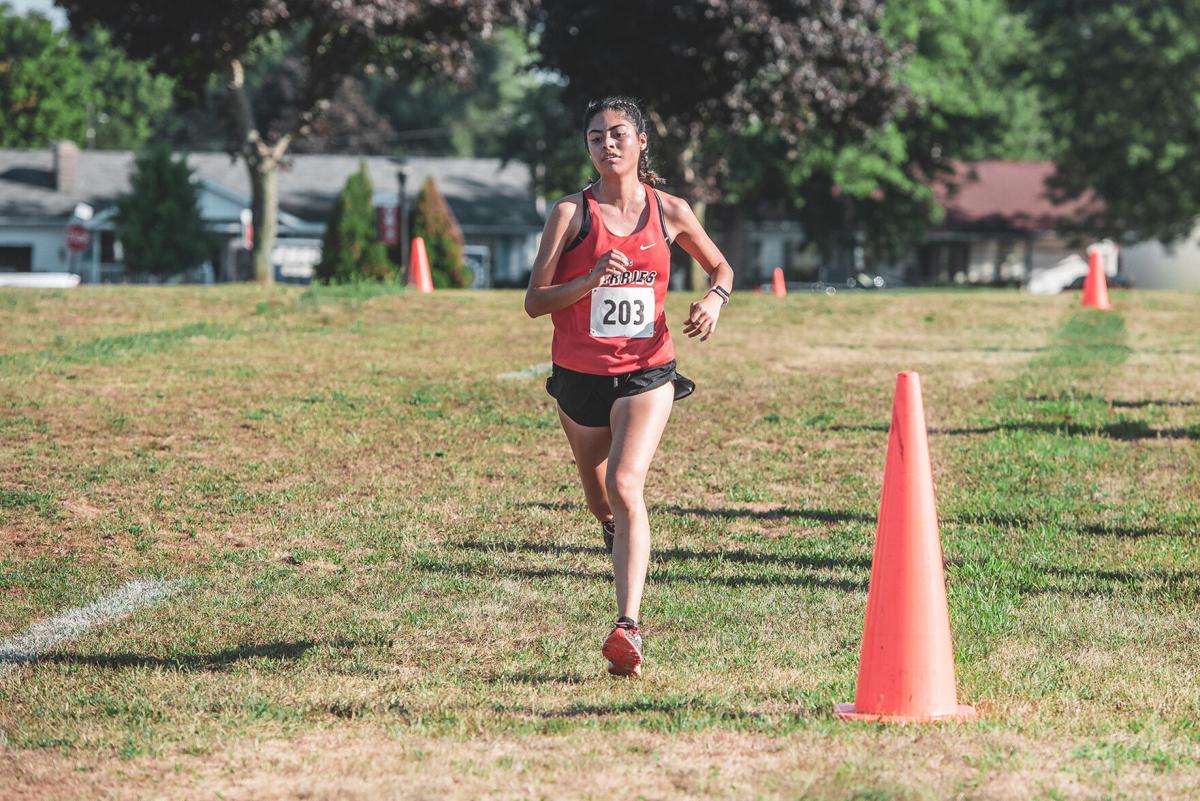 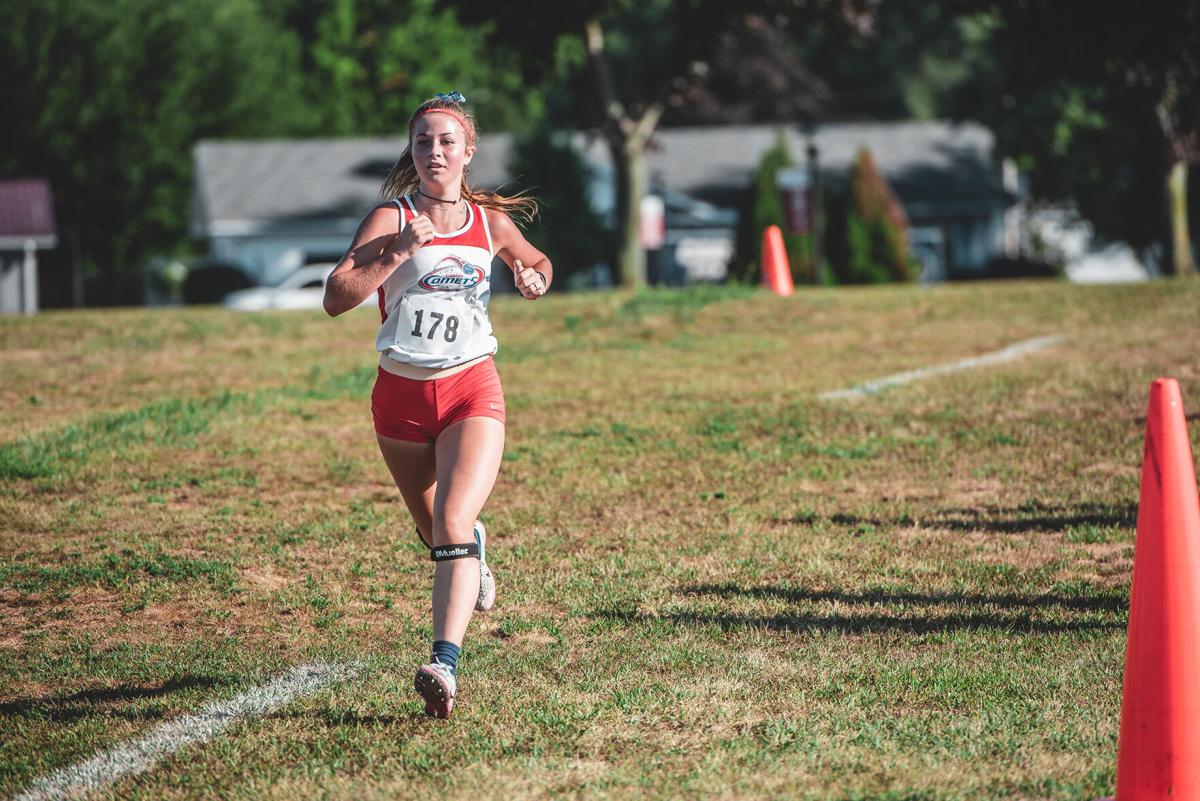 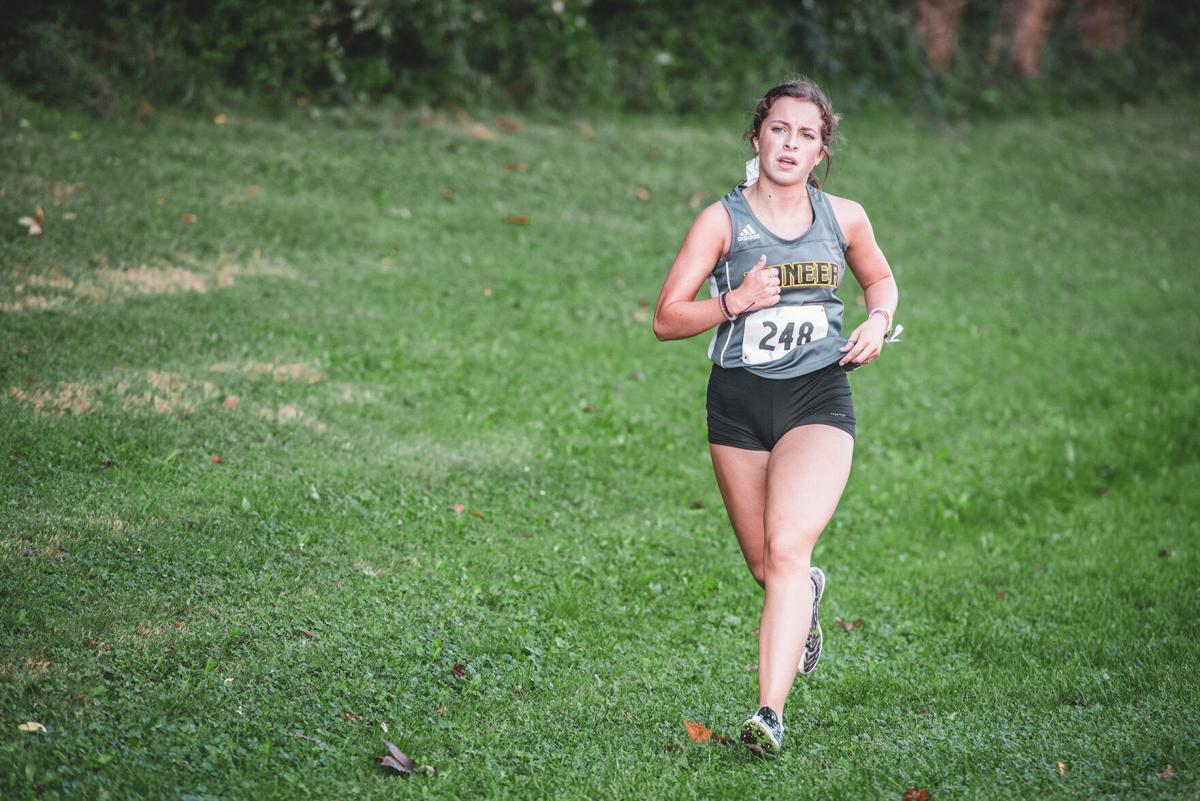 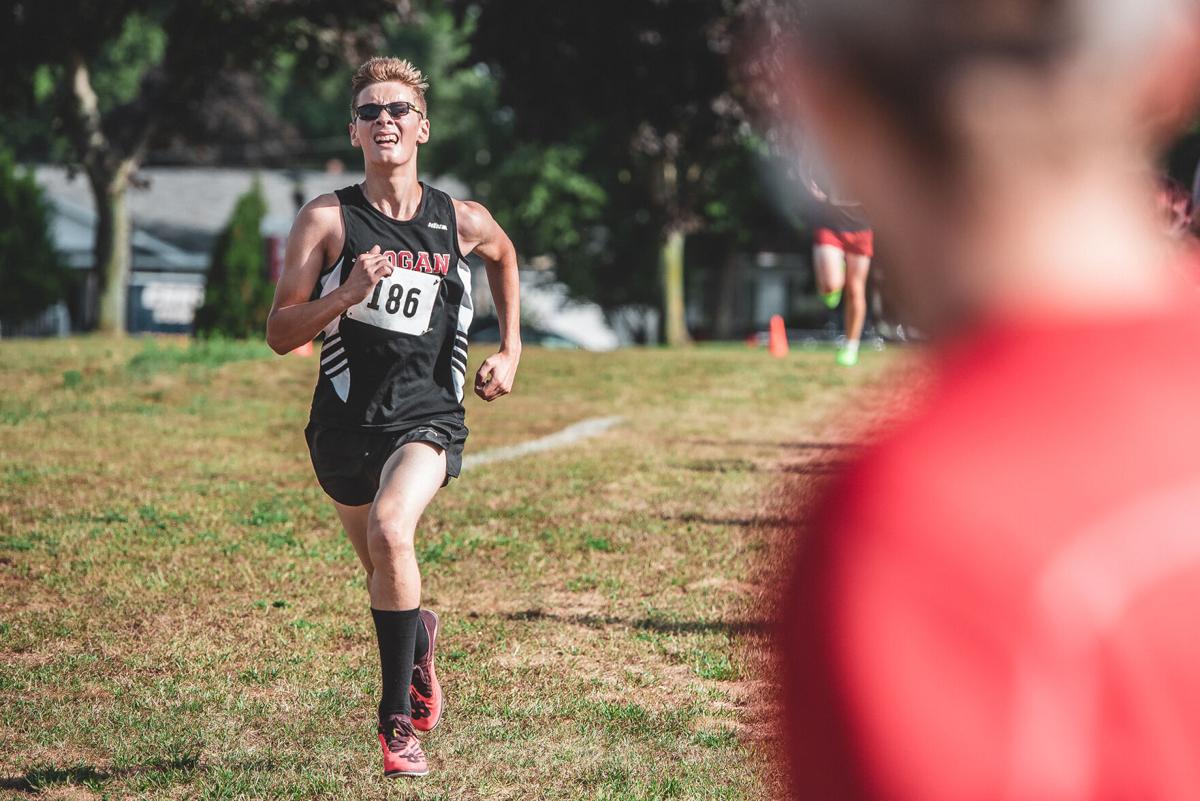 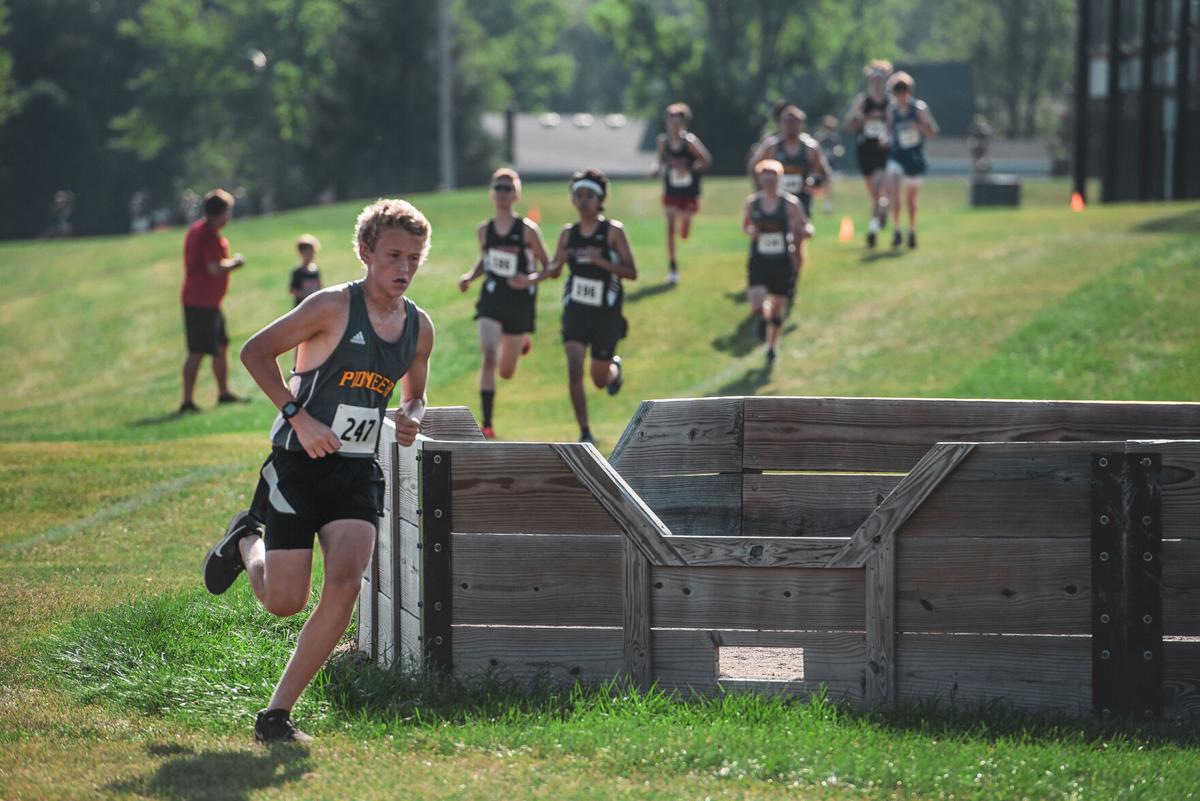 Boys cross country runners compete at the start of the race on Saturday.

Caston, meanwhile, reclaimed the team championship on the boys side.

“I believe we had a great race on Saturday. My team and I all came in to the race knowing we were going to have to stay tough the whole time and do our strategies that coach Rush talked to us about before the race,” Leicht said. “I would like to give credit to Violet Montgomery for pushing me the whole race. I am so proud of my team because we’ve been putting in lots of hard work and it paid off. We all knew we had to push to get through the race to get the big win and get the finishes we wanted.”

“First I want to commend Logansport, Caston and Pioneer ladies and coaches on a great race,” Cass coach Denise Rush said. “We knew Logansport would be tough with Salamanca back this week and we would have to step up in some spots. Makenna Leicht took the early lead and didn’t look back to make this her third individual county championship. Liberty Scott and Odessa Vest ran strong races medaling in the top five as they continue to run with Makenna at practice, so we are so excited to see what they can do this season. Senior Delaney Zeck had a clutch performance as she passed a Logansport runner in the last mile and moved up from last week. This was crucial she finished in front of Logansport’s fourth and fifth runners. Bella Panmei ran fifth for us and she pushed through pain to hold on to her 18th spot. Kenzie Dockery and Morgan Minnick finished in our top seven varsity as well.

“This was a big team win and I am so happy for our seniors as the smiles on their faces made the day — actually the week and month. We have to get back to working hard in practice on Monday as we know coach Morrill and his Logansport team will be working hard for our next meeting in October at the sectional.”

“We got our No. 1 runner and our No. 5 runner back on Saturday that we didn’t have at the Jacob Graf Memorial Invite where Cass beat us by about 40 points. We knew going in that we were within a few points of them and it could go either way depending on who ran well,” said LHS coach Brian Morrill. “We were disappointed that we didn’t win, but we weren’t disappointed with the way we ran considering it was Carolayn and Gabby Reyes’s first competition of the season. Our sectional is going to be incredibly close if everyone remains healthy with Maconaquah, Cass, Western and us all being pretty close at this point of the season. Everyone improves over the course of season and it will come down to which teams can cut the most time and stay healthy. We have a little more depth than most of the teams, but we need all of our runners to be able to move up 2 to 4 positions over where they are right now. All of these teams are going to be working on the same goal and it should make for an extremely competitive sectional and regional.

Salamanca is poised to have her best season yet, said Morrill.

“She ran more this summer than she has in past summers. She did a couple of 10 mile runs so she has a much better base than she has ever had. We haven’t put in a lot of speed work yet so her 22:20 for her first race has us really excited about where she can go this year. She missed the semistate by two positions last season and that is what she is focused on this year. Maria Perez moved up closer to Malia Roberts this meet and we need both of them to move up closer to the front as we get into weeks 3, 4 and 5. Both Malia and Maria have been into the 21’s before and if they get there again we will be in much better shape to score lower.

“Our next three runners, Azucena Hernandez, Gabby Reyes and Gabby Richie, were off a little from where we think their conditioning should have them finishing, but for some reason most of the runners from all of the teams were a little slower than a week ago. Kaylee Perez placed seventh for us and she is only a freshman and she dropped 41 seconds from a week ago which is really encouraging. We think by the end of the season Kaylee can move up considerably. Erica White continues to work hard in practice and she also is expected to be a factor by the time October rolls around. Erica has been in the mid 21’s and if she can get back there it will help our team a lot. Cecially Martinez ran a 23:02 at the Culver Regional last season and she is running ninth for us. We need Cecially to move up for us and be a factor by the end of the season.”

“I think that we did great as a team,” Colvin said. “Everyone works hard every day and we all went out and did our best. A big part of our success is due to coach [Blair] Zimmerman, he always pushes us to be the best we can. I would say my biggest motivation as an individual has always been my grandpa [Bob Uhrich], who passed away this year. He came to every meet and yelled for me, always telling me that he knew I had more to give and that I could run faster. He was constantly there to push me to do my best. He always told me that he believed in my potential as a runner. I can remember when I placed first at the junior high county race four years ago, he was the first person to come tell me how proud he was. I have no doubt that if he was still here he would have done the same. Hearing his voice in my head is the main reason I always strive to do my best.”

Parke Heritage is a Class 2A school that opened in the 2018-19 school year that combined Rockville and Turkey Run. The Wolves feature IUPUI recruit Atlantis Clendenen.

“Phenomenal player, great outside hitter,” Pioneer coach Rod Nies said. “They feed her the ball every chance they get whether she’s in the back row or whatever. We had our hands full with her and we finally started to figure them out. We didn’t play very well in the first set but of course a lot of that was due to them and her. We started getting some blocks and touches on her hits and slowed her down a little bit. She seemed to wear down some. But my girls put it together and played well. Olivia Brooke is the best setter in 1A, at least what I’ve seen. She had a really nice day. We didn’t pass it very well at times and she was scrambling all over the floor. But when we pass it well, we’re a really good team and we’re a lot of fun to watch.”

The win over Lafayette Central Catholic was a particular big one for Nies, who is in his 14th season as the head coach of the Panthers.

“Central Catholic I don’t know how many times or if we’ve ever beat them. I know since I’ve been here we have never beaten Central Catholic and we finally got it done,” he said. “It was a nice relief. I’m still enjoying it just sitting back and relaxing and enjoying it knowing that we finally got a W on them. Brad [McCarter] always does a great job, has them well prepared and well trained. They’re a very skill driven, he does a great job, he gets them prepared for the end of the season. My girls responded.”

The Panthers (7-2) travel to Logansport tonight.

“It was fun, a little frustrating at times, but when you can play poorly and still come out with two victories against two very good opponents, you’ve got to be pleased,” Nies said.

Cass played three matches in a row and came up short in two sets against Eastern and Northfield and defeated Southern Wells in two sets.

“We had a slow start but finished the day on a better note,” Cass coach Katie Easter said.

The match scheduled for tonight has been postponed. No makeup date has yet been set.

The host Berries won their invite for the second straight year.

Noah Lange went 3-0 on the day at No. 1 singles for the Berries. Gavin Smith and Brant Higgins went 3-0 at No. 2 doubles.

Caston dropped a contest at Maconaquah.

“We played well in spurts throughout the game,” Caston coach Nars Sanchez said. “When we were able to string passes together we saw some success in moving through the thirds. We had some chances, but sometimes we were a little slow to recognize the pass before a defender was on. Despite the 3-0 defeat, Noah Rogers, Kade Zeider and Bailey Zimpleman had a solid game defending. They took on multiple waves of Maconaquah forwards and only conceded one goal in run of play.

“Our first touches let us down again today, however, despite our play, we were still in the match for a large portion of the game. Credit to Maconaquah and the coaching staff. We look to work on our game and be ready for our next match.”

Zimpleman finished with seven saves in the contest.

Logansport went 1-1 on the day with a 3-2 win over South Bend Adams and a 5-1 loss to Culver Academies.

Jenny Requeno scored all four goals on the day for the Berries (2-2-1), who host Lafayette Jeff on Thursday.

Keira Bucinski led Winamac with a 45 to earn medalist honors. She was followed by Giselle Lowry (50), Janet Calfee (51) and Megan Wentz (53).