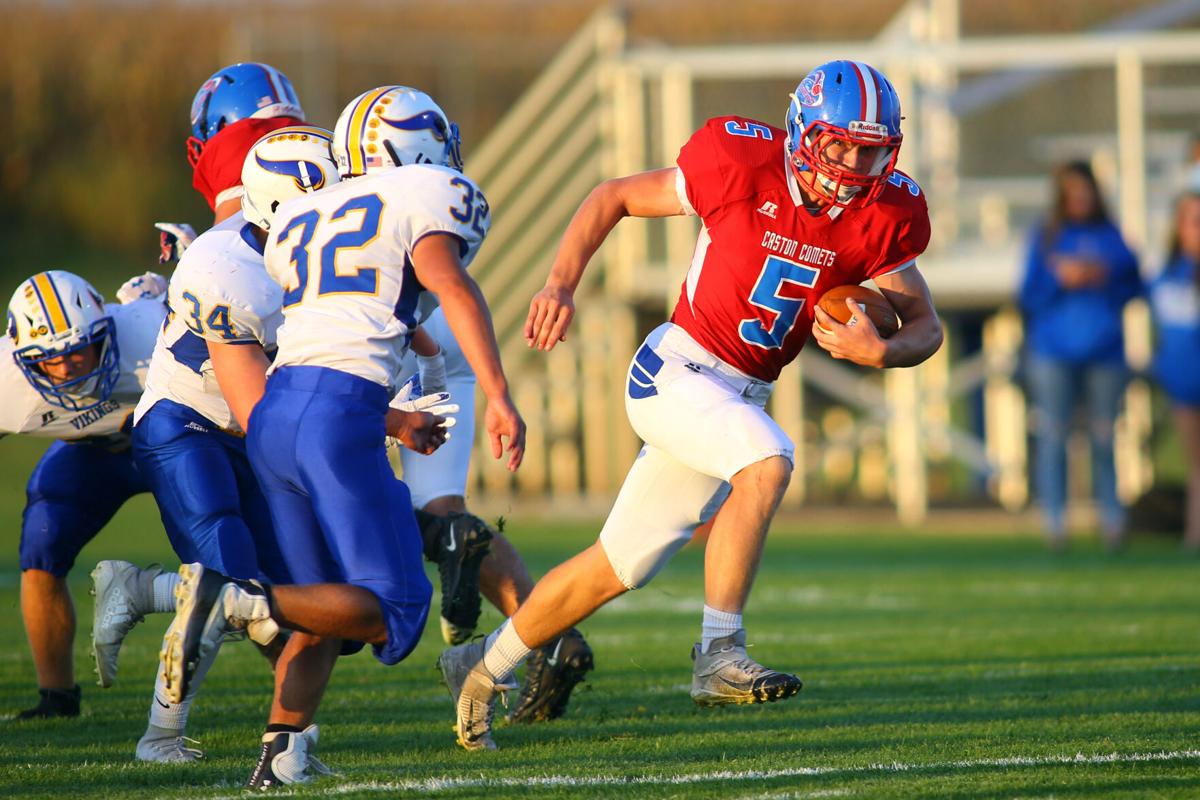 Caston junior Sam Smith breaks away for a big run on Friday night. 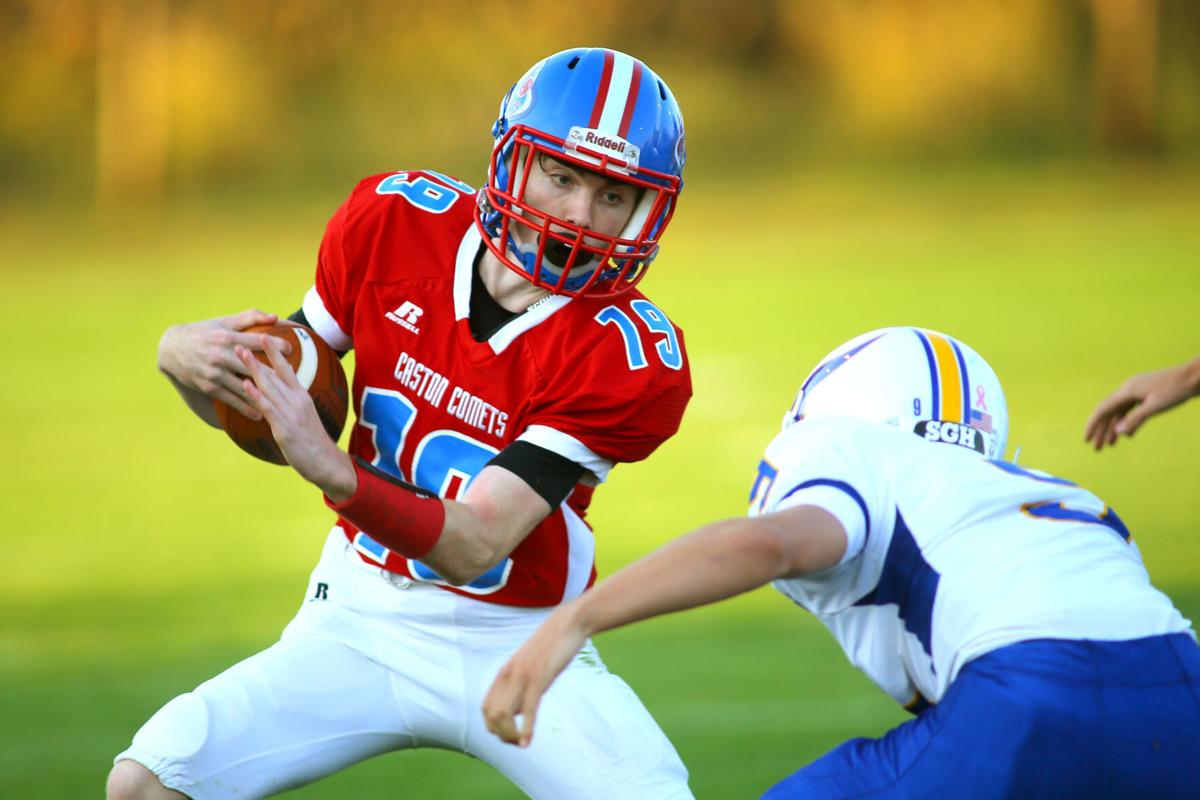 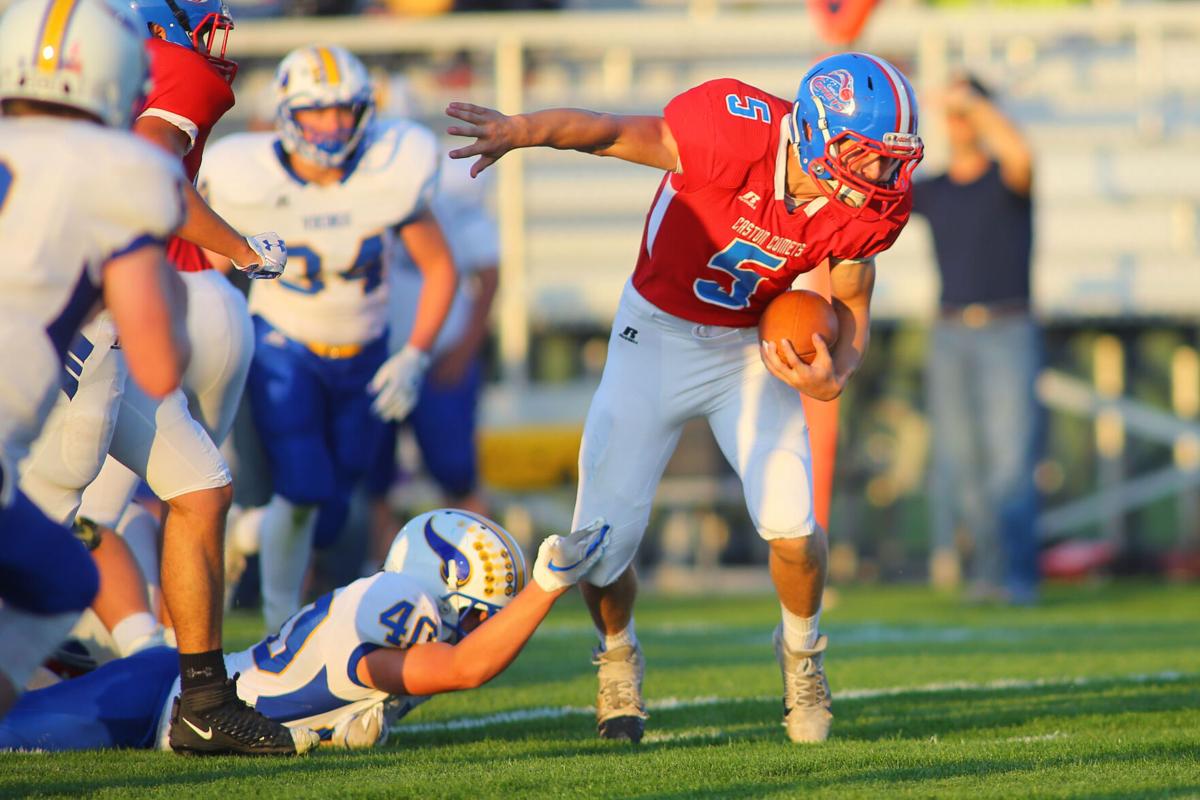 Caston junior Sam Smith breaks away for a big run on Friday night.

FULTON — There was a slight breeze last night at The Crater in Fulton when the Caston Comets took on the North White Vikings. That breeze may have been the winds of change as the Caston football team pitched a shutout against the stronger Vikings. The Comets front lines came to play and not only were they not intimidated by the bigger Vikings but they simply smacked them in the mouth in going on to the 36-0 win.

“We took the field tonight knowing we could beat them and that we were going to beat them because we haven’t been very happy with the way we’ve been playing the past couple weeks,” said senior Jessie Rock-Wolf. “Coach wanted us to come out and play with intensity tonight and to play with intensity all through the game and I thought we did that. We had a really good week of practice and we brought it out on the field with us tonight. We had some kids really step up tonight and make some great plays.”

The Comets (2-4) capped an eight play, 58 yard drive with their opening possession when Sam Smith broke free from 39 yards out for the touchdown with 8:01 left in the quarter. Smith also carried the mail on the conversion and punched it in to give Caston an 8-0 lead early in the game.

North White (1-4) shot themselves in the foot early in the game on their first possession when they were facing fourth and long and decided to punt. With the Vikings punter set up inside the 10-yard line the snap sailed over his head and he fell on it on the 1-yard line turning the ball over on downs and giving Caston unbelievable field position. It took just one play for Damian Sullivan to punch it in from one yard out at the 5:05 mark of the first quarter. The PAT was good and Caston was now looking at a 15-0 lead.

Both teams’ offenses stalled for the rest of the quarter with the 15-0 lead holding up going in to the second frame.

Caston was again blessed with excellent field position following a North White fumble that the Comets recovered on the 18-yard line. It took just two plays for Smith to take it in from 9 yards out as a 9:44 mark of the second quarter. The PAT by Josh Sullivan was good and the Comets built their lead to 22-0.

Following the Caston touchdown, North White was looking at a three and out and was preparing to punt. Cayden Webb popped through the right side of the line to block it. The ball was down on the 4-yard line and it took Smith just one play to take it in from 4 yards out at the 7:57 mark of the second quarter. The point after was good and the score now stood at 29-0. Both squads had a chance to get something going late in the half but the offenses stalled and Caston went into the locker room with a 29-0 lead.

The Comets’ shutout nearly came to an end early in the third quarter when Viking quarterback Elijah Quasebarth hit Brayden Buschman for an 88 yard gain, but the Caston defense stopped him on the 2-yard line. The Comets goal line defense dug in and kept the Vikings out of the end zone to help preserve the shutout.

The final score of the night for the Comets came in the third quarter when QB Grant Hickle found paydirt. The Sullivan point after was good giving Caston the 36-0 shutout. It was the Comets’ first shutout win since 2016.

“I’m really pleased with what I saw out there tonight, we had some kids making great plays all over the place,” said Comets head coach Will Porter. “I thought our special teams really stepped up their play tonight and I thought our defense played really well too. We’ve had two tough opponents the past couple weeks in Pioneer and LaVille and I told our kids to take the field and match the intensity that those two teams play with and we’ll come out victorious and tonight our kids played that way. We still have a ways to go, we’re not there yet but the kids are working hard and it’s translating onto the field.”

Caston travels to Culver next week.