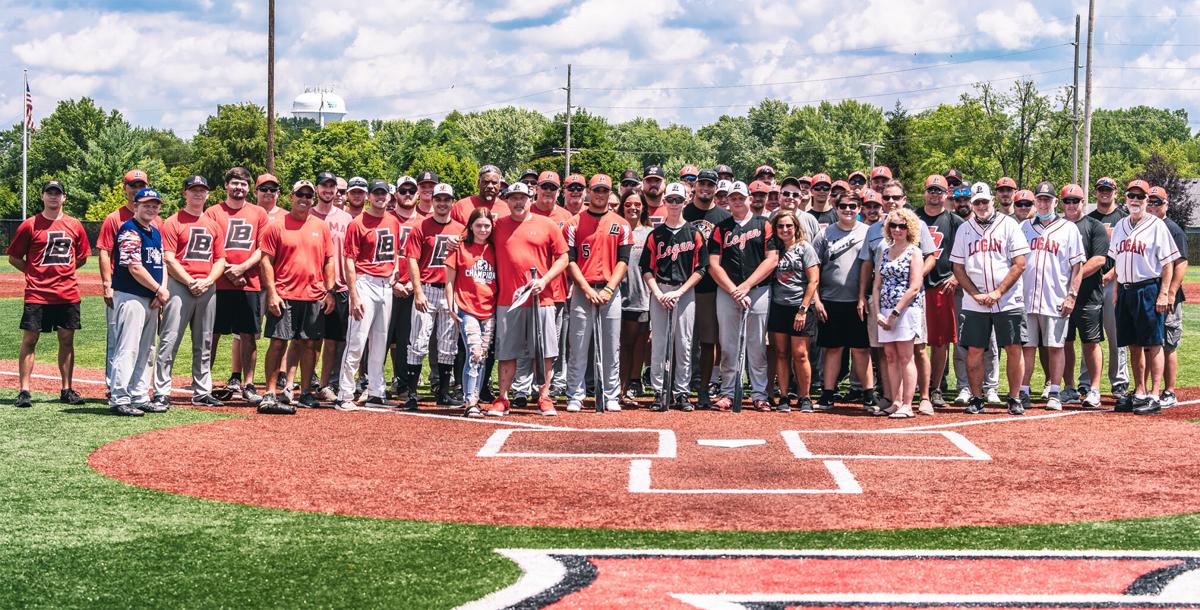 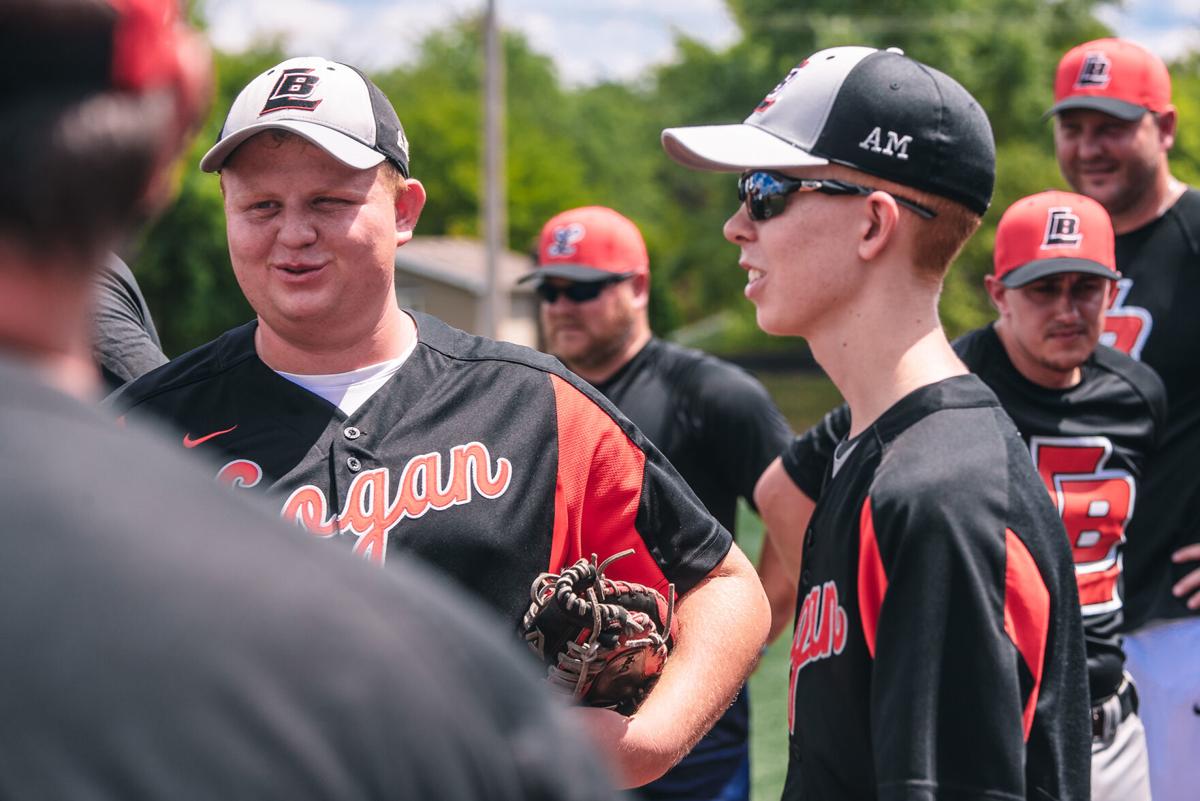 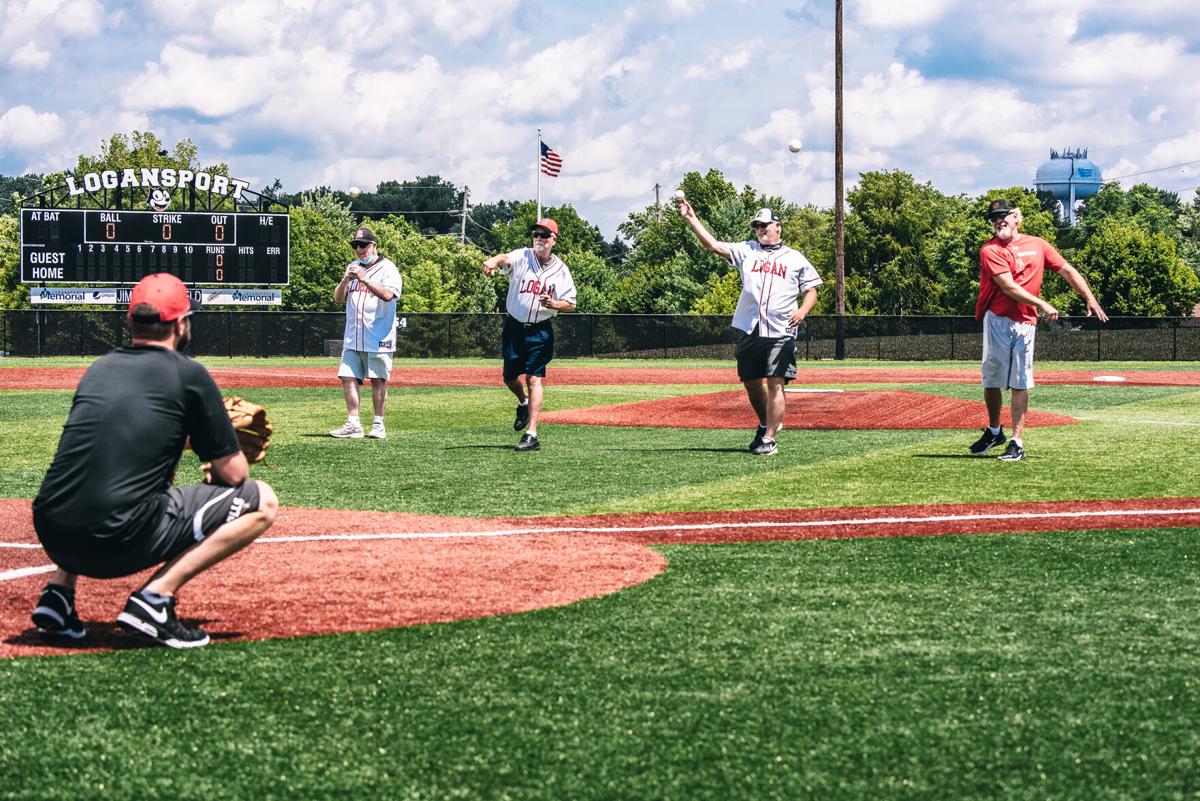 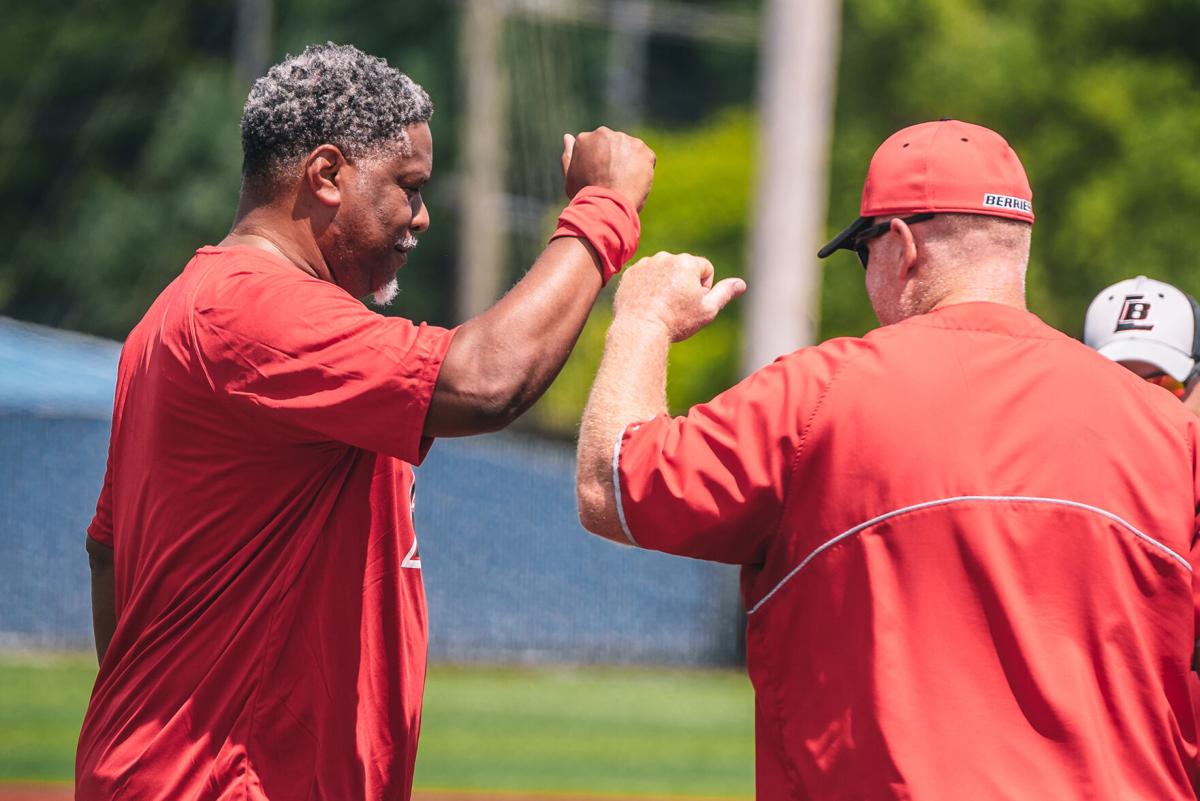 Mike Farrell, now a scout with the Kansas City Royals, fist bumps Dan Frye, who is now the head coach of the Logansport Berries, during the LHS alumni game on Sunday. The two were teammates at Logansport and later at Indiana State. 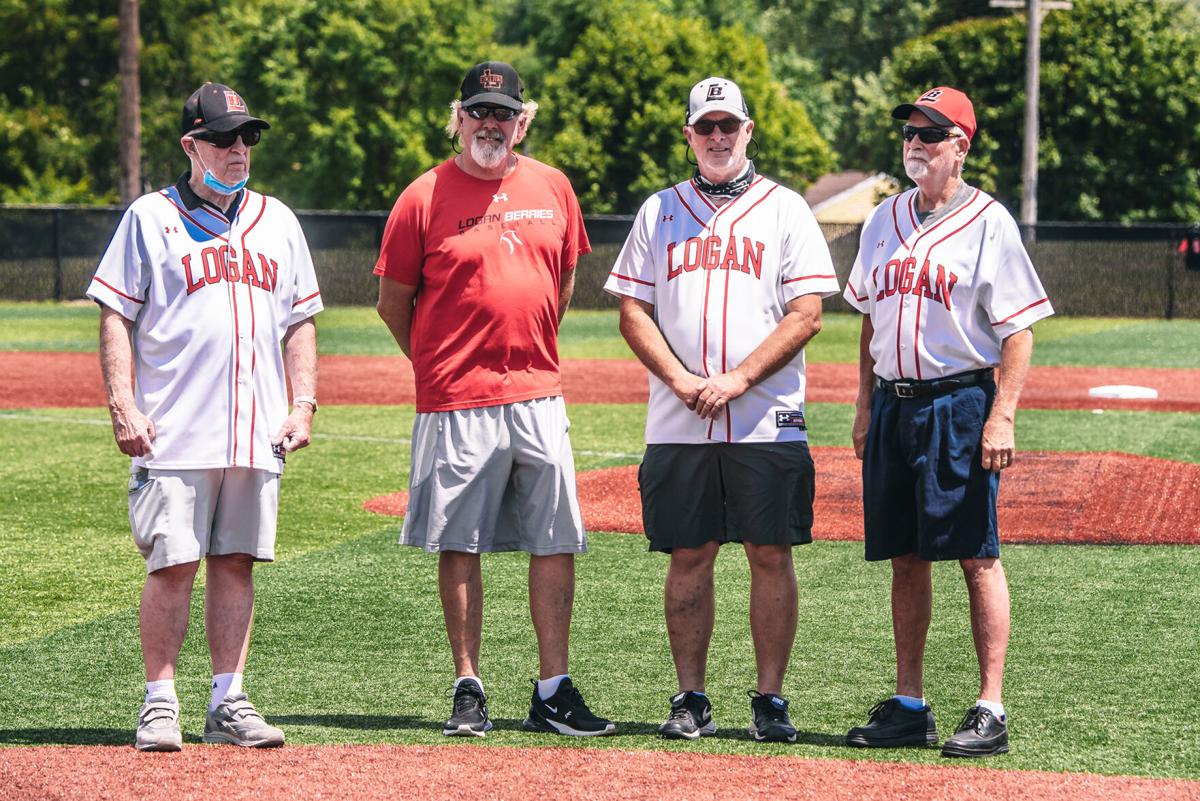 Mike Farrell, now a scout with the Kansas City Royals, fist bumps Dan Frye, who is now the head coach of the Logansport Berries, during the LHS alumni game on Sunday. The two were teammates at Logansport and later at Indiana State.

It appears one of the most tradition-rich baseball programs in the state now has a new tradition.

The Logansport baseball program hosted an alumni game on Sunday afternoon and by all indications it was a success. Plans are for it to continue into the future.

The coronavirus pandemic has wreaked havoc this year and some fans wore masks while social distancing among groups of people was the norm.

New Logansport coach Dan Frye was one of the old guys who showed he can still play a little. At one time the top prospect in the Cincinnati Reds organization, Frye, now 50, ripped a pair of singles and his pinch runners scored a pair of runs. His efforts were not enough as the Black team defeated the Red team 8-7.

“It’s a great day, we had great weather. It was actually hotter than I’ll get out,” said Frye, as temperatures soared into the 90s. “It was my first day on the turf here in the summer and it was plenty warm, probably 10 or 15 degrees hotter on this turf. But we wanted to celebrate the seniors and we were able to do that with CJ Hallam, Drake McLochlin and Matt Foutz and honor Auden Myers. That was what today was all about. We had a great turnout with fans and we had a great turnout with alumni, shoot we had to start turning people away because we didn’t have enough room. I think it went well.”

One of Frye’s hits was down the left field line into the corner but he was well content to settle for a single.

“I got a fastball in and just dropped the bat head on it, it was OK. It was a long way down to first base, I need to lose some weight,” he said. “I may have tweaked something. I needed a pinch runner there.”

Foutz got the start on the mound for the Black team and the senior right-hander pitched two scoreless innings. He and his classmates of course had their senior season canceled due to the pandemic.

“It’s tough not being able to know when your last game is, so to be able to come out and play a game against some old alumni and to be able to play with my seniors one last time was fun,” he said.

Foutz, like McLochlin and Hallam, was going to be counted on as a key pitcher this year.

“I was definitely looking forward to be able to come out on the mound again and contribute to some wins. It was really tough not being able to finish out that way,” he said.

Foutz was awarded the Most Outstanding Student in Radio and TV at the Century Career Center this year. He will attend Huntington University to study film production and will be on the bowling team.

McLochlin is set to play baseball at Franklin and Hallam is set to play tennis at Indiana Tech. Myers’ jersey was placed on the center field wall. Myers was set to be a key player for the Berries his final two years of high school before an automobile accident tragically claimed his life at the age of 16 in November of 2018. The Berries dedicated their sectional championship to him last year.

The Lambert family donated shirts for the game. Mike McMahan of Creative Promotions donated cushioned bleacher seats that were given to fans. Titan Bats donated two signed bats that will be sold at the annual Berry baseball golf outing in late August.

The Black team got on the board in the second inning when Tucker Platt drew a walk, stole second and scored all the way from second on a groundout to second by Kyle Jordan. It was a play that would have made his grandpa Bill Platt proud. Bill, who recently passed away at age 80, liked to joke in the press box that Tucker got his speed from him after Tuck would make a similar play on the base paths for the Berries. Bill Platt could play as well, as he was drafted by the Milwaukee Braves after he graduated from LHS in 1957.

Austin Johanning tied the game in the third when he reached on a single and came around to score on a passed ball.

The Black team struck for three runs in the fourth. Joe Ness Jr. started the rally with a base hit. Zach Russell and Ryan Alder drew a walk to load the bases with one out. Cody Graf singled home a run. Tyler Ness followed with a ground-rule two-run double to left center to make it 4-1.

“It’s the first time I’ve seen live pitching since I graduated high school which was 15 years ago. So I was pretty happy to get a double right off the bat,” said Tyler Ness, who attributed the hit to “luck.”

“The pitcher found the barrel of the bat for me,” he added.

The Red team got a run back in the bottom of the fourth when Brad Nies drew a walk and came around to score when Riley Hershberger drew a bases-loaded walk.

The Black team answered in the fifth when Todd Stephens singled and came around to score on an RBI single by Dan Angle to make it 5-2.

The Red team struck for four runs in the fifth to take the lead. Clayton Frye started the rally with a triple. Tyler Ness was then brought in to face one batter, Dan Frye. But a wild pitch allowed a run to score and Dan Frye drew a walk.

“In 2005 Dan and I played in firefighter/cop versus the baseball guys, the first two pitches I made him look like a fool on curveballs and the third pitch he took me deep,” said Tyler, “so I wanted to get a little revenge on him, unfortunately I walked him but we came out with the victory so I can’t complain.”

Johanning later singled home a run for the Red team. Tony Berkshire reached on an error to allow another run to score. Tyler Gellinger singled in a run to give the Red team a 6-5 lead.

The Black team tied it in the sixth when Wil Bennett was hit by a pitch and came around to score on a double by Derreck Parkevich, his second double of the game.

The Black team scored the winning runs in the eighth. Graf drew a walk to start the rally. Matt Harris reached on an error. The two runners moved up on a wild pitch and Zach White’s two-run single made it an 8-6 game.

The Red team got a run back in the bottom of the eighth when Dan Frye singled and his pinch runner eventually scored on a sac fly to left by Marcus Record.

The ninth inning was highlighted by Matt Jones, Class of 1991 and current LHS principal, and Mike Farrell, Class of 1987 and now a scout for the Kansas City Royals, pitching scoreless innings.

Farrell, who drew a walk in all three of his plate appearances for the Red team, pitched the ninth for the Black team because they ran out of pitching and got the save. Graf got the win.

The Red team outhit the Black team 12-8 for the game. Johanning went 3-for-3 for the Red team. Tyler Gellinger had two hits. Tanner Gellinger, Matt Jones and Mike Atwell each added a hit.

The alumni game will likely turn into an annual summer event.

“It was hot, it was a lot of fun though,” Tyler Ness said. “It’s always good to see a lot of these guys, especially the older guys. It was a nice Sunday at the ball field. I haven’t been on Turner Field in probably seven or eight years. So it’s always good to get back up here and play a little baseball.”