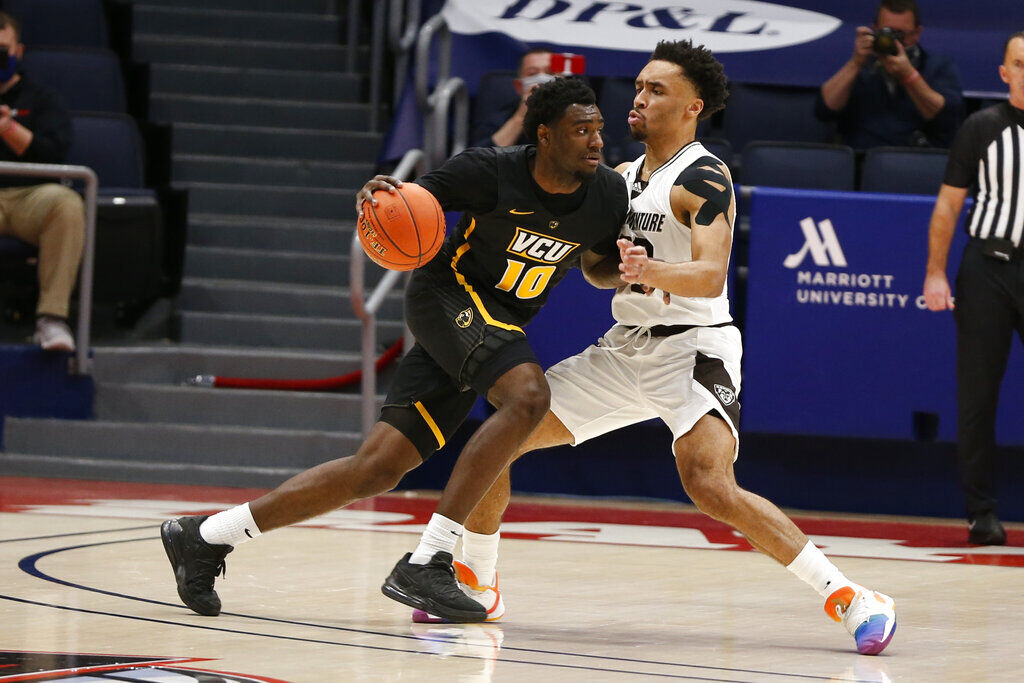 VCU’s Vince Williams, left, dives to the basket as St. Bonaventure’s Jalen Adaway defends during the first half of an NCAA college basketball championship game for the Atlantic Ten Conference tournament on March 14 in Dayton, Ohio. 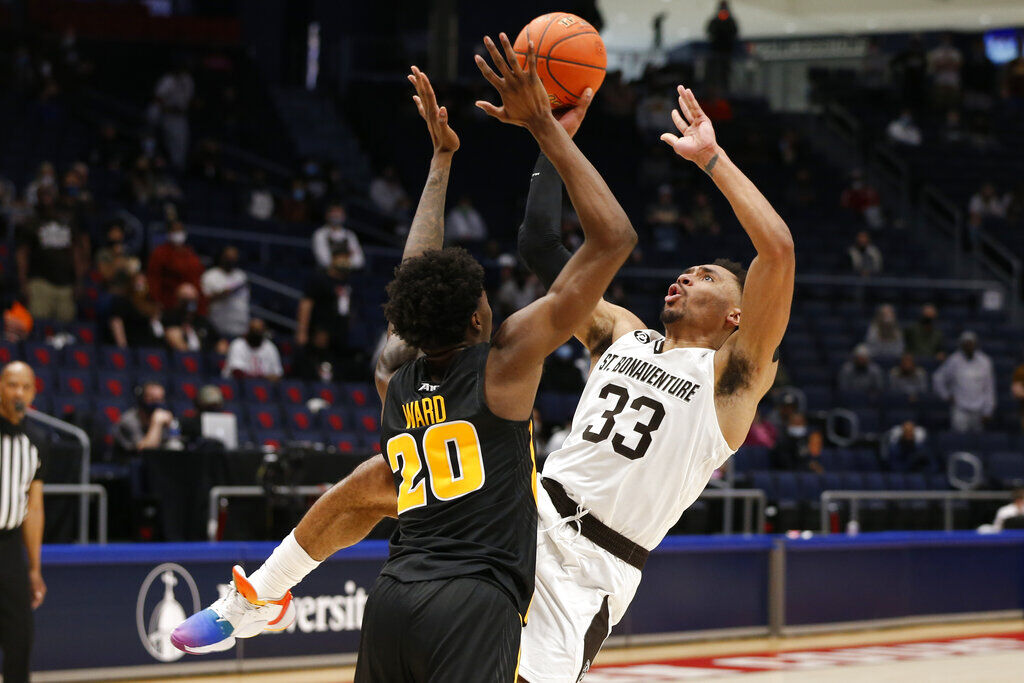 St. Bonaventure’s Jalen Adaway, right, tries to shoot over VCU’s Hason Ward during the first half of an NCAA college basketball championship game for the Atlantic Ten Conference tournament.

VCU’s Vince Williams, left, dives to the basket as St. Bonaventure’s Jalen Adaway defends during the first half of an NCAA college basketball championship game for the Atlantic Ten Conference tournament on March 14 in Dayton, Ohio.

St. Bonaventure’s Jalen Adaway, right, tries to shoot over VCU’s Hason Ward during the first half of an NCAA college basketball championship game for the Atlantic Ten Conference tournament.

When Jalen Adaway transferred from Miami of Ohio to St. Bonaventure in 2019, he was hoping to find the right fit.

His first season on the court for the Bonnies couldn’t have gone much better, as the Bonnies had one of their best seasons in program history.

“I think my choice to come here, I don’t think I could have got any better than this,” Adaway said.

Bona earned a No. 9 seed in the NCAA Tournament, the highest for the program in the modern era of the tourney.

“I think we had a pretty good and fun year,” Adaway said. “Coming into it, we weren’t sure how many games we were even going to get to play because of COVID. At the start of our season we had to miss the things like the Bubbleville in Connecticut, we were supposed to go there and play some games. We ended up getting COVID and we had to miss those. So we were like, oh man, this might be a harsh season. But for the most part I think we all just kept grinding, stuck it out and made some good things happen.”

The Bonnies made their eighth NCAA Tournament appearance all-time and second in three seasons.

Adaway talked about his tournament experience.

“It was great, first NCAA appearance, playing in my home state, playing in Assembly. That was just an incredible feeling and just a surreal experience,” he said. “But we didn’t play or perform how we wanted to. We knew it coming into locker room, we knew we left a lot on the table. But we’re all coming back, we’re adding some pieces, so next year we’re really hoping to make some noise and make a good, long run.”

They controlled the tempo early but ended up falling behind and couldn’t catch up against the high scoring LSU team.

“We just weren’t making shots really,” Adaway said. “I felt like that was the main thing because we were playing good defense. I’m pretty sure the first seven or eight minutes or so the score was like 4-2 or something like that. I wasn’t too worried about the defensive side, I was just worried about us having our legs and being able to just knock down shots when we needed to.”

Bona’s defense ranked fifth in the nation entering the NCAA Tournament by allowing just over 60 points per game during the season.

“We really take pride in it,” Adaway said. “We have a lot of guys take a lot of pride in just their overall games. But we all hang our hats on defense and we know that if we play defense it’s going to turn into offense for us and easy baskets and things like that.”

Adaway averaged 12.2 ppg and 6.0 rpg on the season and was named to the A10 All-Tournament team as part of an outstanding debut season with St. Bonaventure.

They might be the oldest team in the nation next season as they are set to return five starters who will all be seniors, as Adaway will be joined by Kyle Lofton, Osun Osunniyi, Jaren Holmes and Dominick Welch.

In national “way-too-early” polls, St. Bonaventure is ranked 15th by ESPN, 19th by CBS Sports and 22nd by Sports Illustrated.

“I’ll be surprised if we aren’t Top 25 to start the season,” Adaway said. “But I feel like we’re not too worried about the rankings and stuff. We’re just worried about attacking the summer and trying to get the most out of it like skill-wise, training, getting stronger, bigger and faster, things like that.”

Atlantic 10 Coach of the Year Mark Schmidt has guided the Bonnies to one of the best runs of success for any program in the conference over the past decade.

“He’s a great, great coach,” Adaway said. “He’s always on us, but at the same time he does give us give us that freedom once he trusts us. But he definitely stays on us and just keeps pushing us.”

Despite battling the adversity of the pandemic, a shortened season and empty arenas, the Bonnies again rose to national prominence while winning the Atlantic 10 regular season and tournament championships.

Adaway is looking forward to hopefully a more normal senior year of college and a return of fans at the Reilly Center for what is shaping up to be a memorable senior season.

“We’re really hoping to get fans in here,” he said. “They’re doing some renovating to our gym just getting it ready for next season. So hopefully we’ll see this place sold out quite a few games next year.”