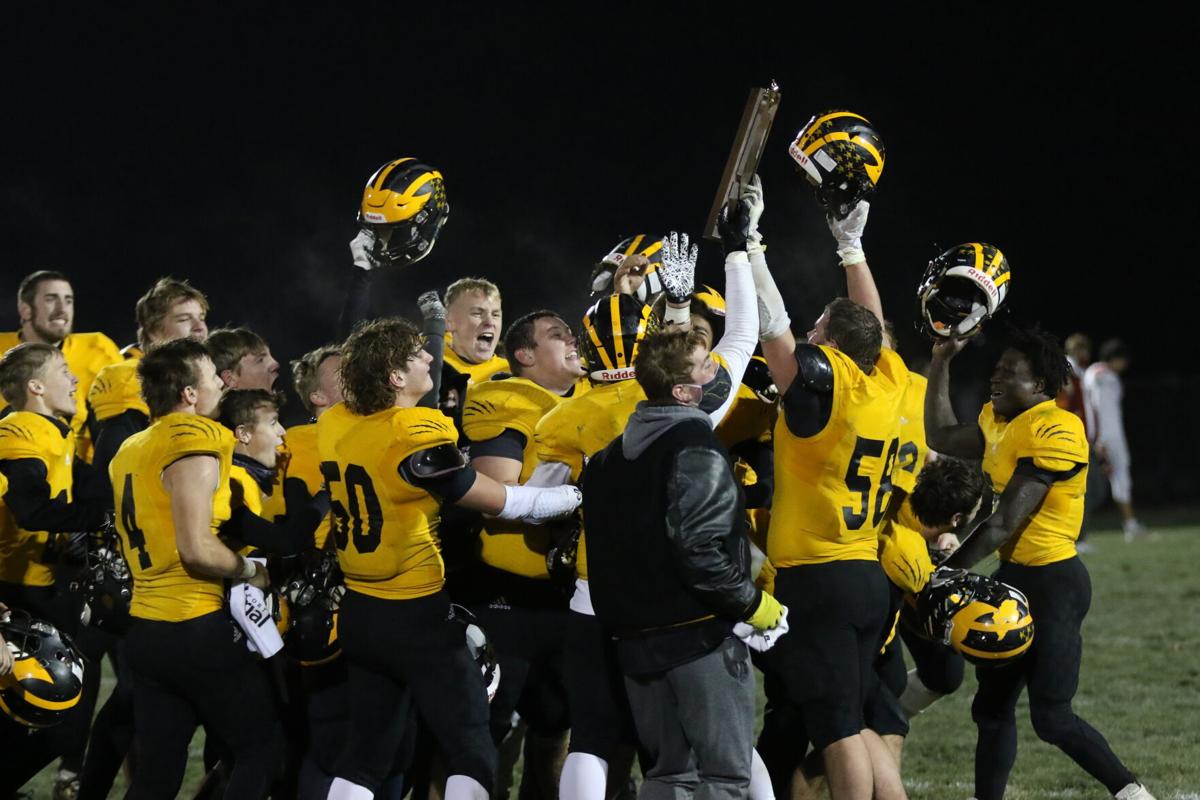 The Pioneer Panthers celebrate their regional championship on Friday night. 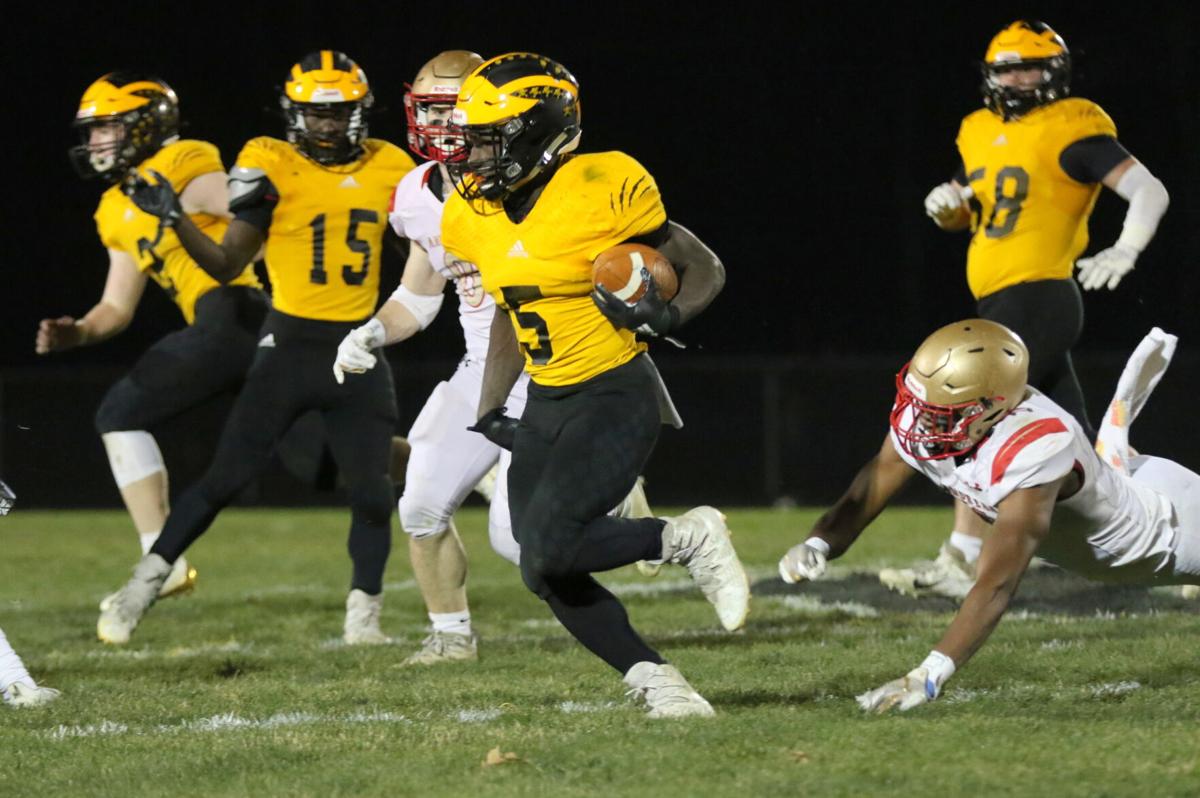 Ezra Lewellen runs the ball against Andrean on Friday night. 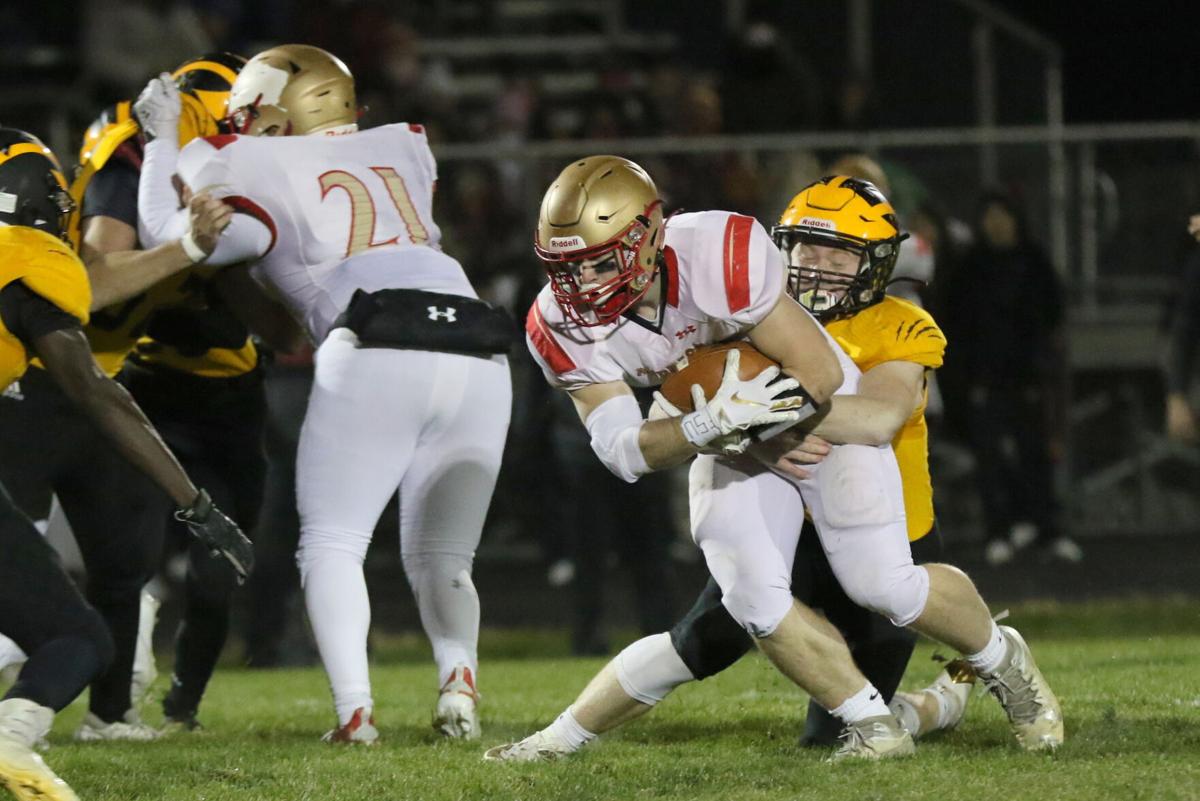 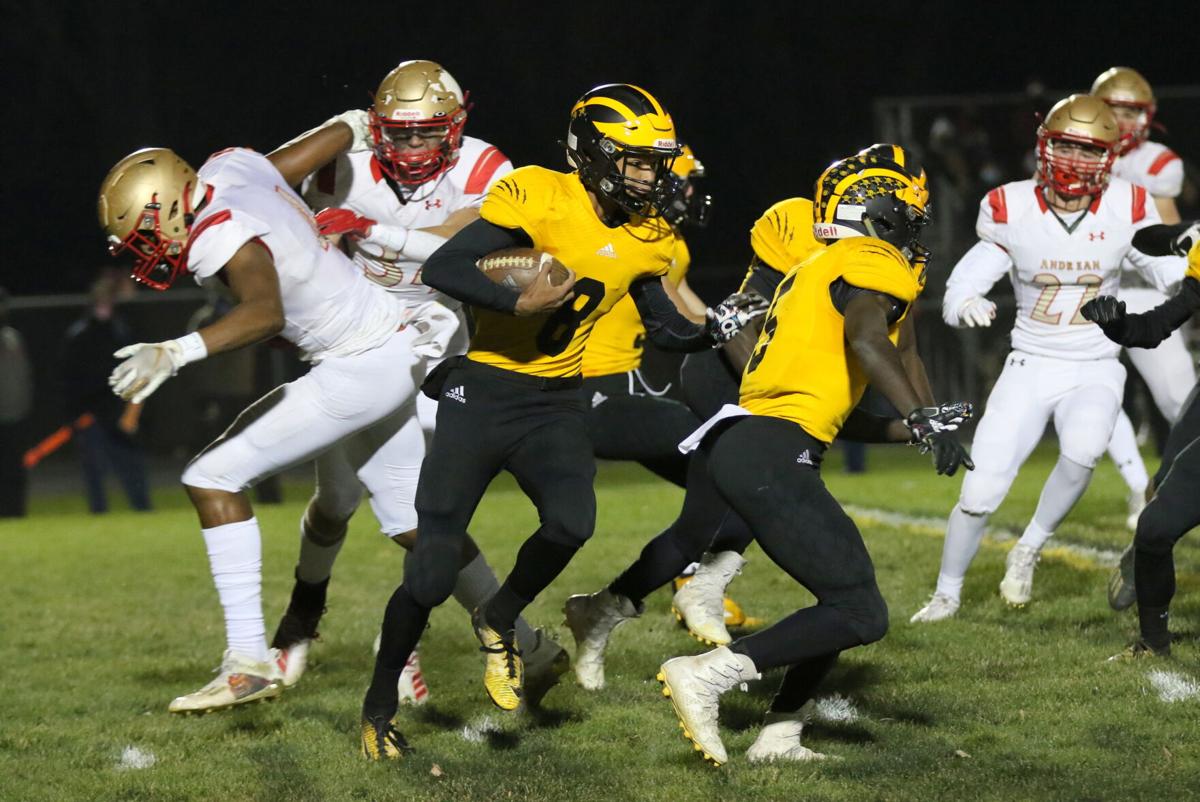 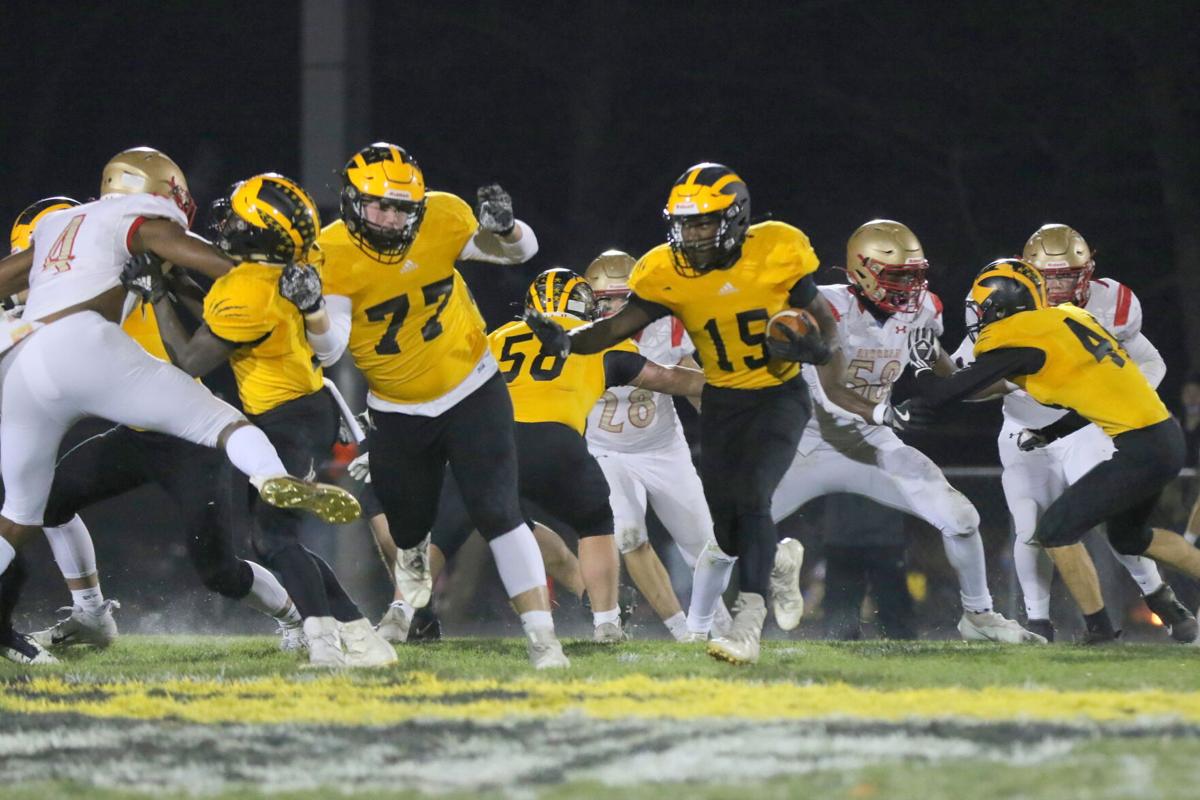 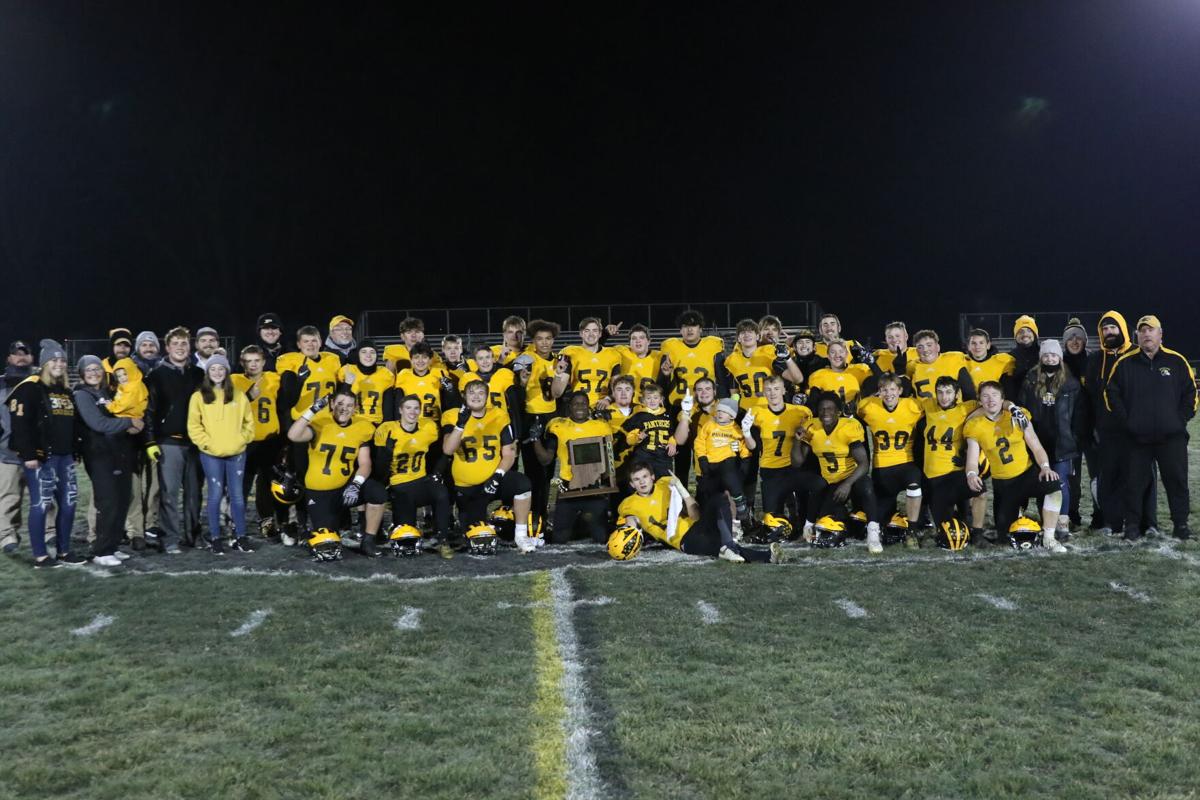 The Pioneer Panthers won a Class 2A regional championship on Friday night.

The Pioneer Panthers celebrate their regional championship on Friday night.

Ezra Lewellen runs the ball against Andrean on Friday night.

The Pioneer Panthers won a Class 2A regional championship on Friday night.

The Panthers took down No. 1-ranked Andrean 24-21 on Friday night in a Class 2A regional championship game at the Pit.

The No. 3 Panthers (12-1) will travel to unranked Fort Wayne Bishop Luers (7-6) next Friday night for the northern semistate game.

The Panthers already had a win over Class 6A Chesterton this season. Their win over Andrean (11-2) was probably more impressive, especially considering what was on the line.

It wasn’t decided until Addai Lewellen came up with an interception in the end zone as the Panthers were able to stave off a furious comeback attempt by the Fighting 59ers.

Andrean, which trailed by 16 points earlier in the fourth quarter, had a chance to take the lead late. Trailing 24-21 and facing second-and-10 from the Pioneer 20-yard line with 1:16 remaining, senior quarterback Joe Cimino dropped back to pass. He looked for his favorite target, senior Nick Flesher, but Lewellen stepped in front of him and came down with the ball in the end zone to save the Panthers’ season.

The Panthers faced a huge size disadvantage on both sides of the ball. But utilizing the old wing-T offense, they rushed for 265 yards on 53 carries (5 yards per carry).

Addai Lewellen rushed for 140 yards on 25 carries. Ezra Lewellen had 107 yards on 20 attempts.

Cimino was 12 of 19 passing for 176 yards and a touchdown. He made just one mistake on his final pass of the night.

There were many game-changing plays on the night. The Panthers lost a fumble early on their first drive of the game on a fumbled snap. But their defense came up with a stop, as Tyler Gaumer recorded a sack on a fourth-and-5 play.

Cimino later broke off a 43-yard run but was caught by Ezra Lewellen, who knocked the ball loose for a fumble. Logan Smith was there for the recovery at the Pioneer 22-yard line.

The Panthers then went to work again on offense and drove 78 yards, and this time on third-and-goal from the 1, freshman quarterback Cayden Hill scored on a QB sneak. Addai Lewellen’s 2-point run made it 8-0 with 5:28 left in the first half.

The 59ers answered with a 72-yard drive of their own, capped by a 1-yard TD run by Ryan Walsh. Cimino’s 2-point pass to Flesher tied the game at 8-all with 32 seconds left in the half, and the score would remain that way at halftime.

The Panthers forced a three-and-out to start the second half. The 59ers attempted a fake punt pass on fourth-and-2 but it fell incomplete, giving the Panthers the ball at the Andrean 42-yard line.

The Panthers faced a fourth-and-8 from the 11. In the wildcat formation, Ezra Lewellen rolled left and ran 10 yards for a first down. Addai Lewellen scored from 1 yard out, followed by a 2-point run by Ezra to make it 16-8 with 4:48 left in the third.

The Panthers forced another three-and-out. This time the 59ers punted, but it was a shank to give the Panthers the ball at their 48.

The Panthers later faced a fourth-and-goal from the 5. Hill rolled left and threw a strike to Smith, who hauled it in with 9:42 remaining. Addai Lewellen’s 2-point run made it 24-8.

But the 59ers answered with a quick scoring drive following a short kickoff. Cimino’s 15-yard TD pass to Flesher made it 24-14 with 8:10 left. The 59ers went for 2 and gave the ball to standout Walsh, a 5-11, 190-pound senior. But he was met at the goal line by Ezra Lewellen, who didn’t budge in making a key tackle to keep it a two-possession game.

The 59ers forced a three-and-out and Pioneer’s first punt of the game. The 59ers again drove the ball down quickly and Walsh’s 10-yard TD run was followed by an extra point to make it 24-21 with 5:04 left.

The Panthers were driving and trying to run out the rest of the clock. On third-and-4 from the Andrean 45, Addai Lewellen lost a fumble to give the 59ers the ball back at the 43 with 2:43 left.

The 59ers drove it down to the 20 before Addai Lewellen came up with the game-saving and regional-clinching interception.

“Having that fumble, that really killed, so I knew I had to make up for that,” Addai Lewellen said. “Coach always says, if the ball’s up, that’s your ball, be a ball hawk. Hey, I really wanted that win. These guys played really well and I wanted them to see the rewards of their hard work. I wanted to get that ball and get that win.”

Not only were the Panthers effective in running the ball, they held Walsh to 63 yards rushing on 17 carries. That was the whole of Andrean’s running game on the night other than Cimino’s 43-yard run he lost a fumble on.

“We had a deal with the line, they stop the run, we stop the pass and that’s what worked,” Addai Lewellen.

The Panthers’ big boys deserve a game ball as well.

The Panthers won despite being without one of their star players, second leading rusher Brock Robinson, who is out for the season with a broken collarbone.

“We have not as big of a line, but they’re quick,” Addai said. “We told them all you have to do is get on their hips, and when you’re on their hips, we can drive them. Our line really did well and stepped up, made big holes for the running backs. We owe it all to them.”

The Pharos-Tribune will have further coverage of the big regional win and a semistate preview in future editions and online.

Bookwalter, Arlan E., 78, of Walton, graveside services will be held at 2 p.m. today at Walton IOOF Cemetery, with Pastor Doug Thomas officiating. Due to the COVID -19 pandemic, face masks are required if attending services. Murray Weaver Funeral Home in Galveston has been entrusted with arr…