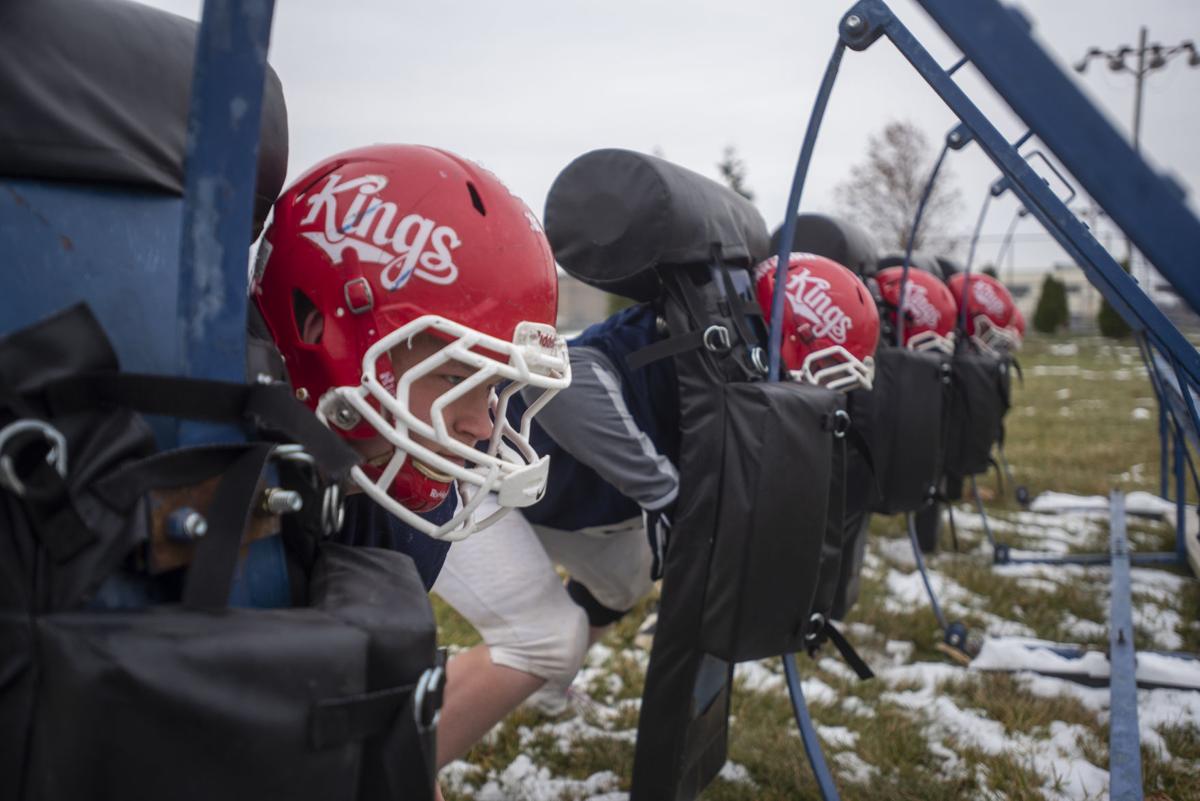 Lewis Cass junior Nathaniel Moss and his offensive line teammates have gotten the job done in the trenches for the Kings this season. 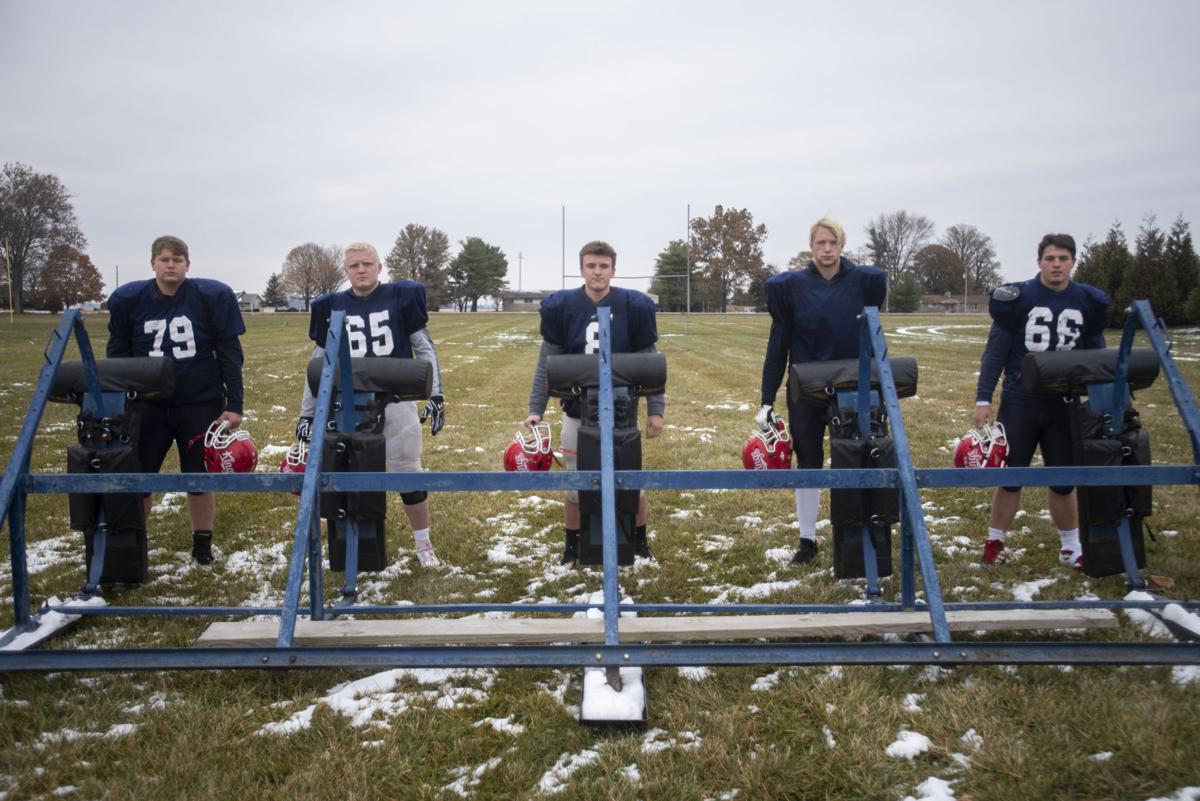 Lewis Cass junior Nathaniel Moss and his offensive line teammates have gotten the job done in the trenches for the Kings this season.

The Lewis Cass football team has a tremendous group of skill position players.

But football games are won and lost in the trenches. And perhaps no group has led to the Kings’ improvement this season than the big boys up front.

Their linemen have put them in position for success.

The Kings’ depth up front took a hit when senior starting guard Dylan Loos (5-9, 218) was lost for the season in Week 6 with a knee injury.

“For us if we just get a little bit of a hole, having those backs who are that fast, they can fit right through that, like a snap of a finger,” Garland said. “That really helps us out a lot.”

“Joey’s really versatile. He allows us to do a lot of different things,” coach Phillips said. “He’s pretty a good receiver, he’s a big target. He’s really physical, he’s one of my inside linebackers so he likes to hit. He carries that into the offense as well. Joey’s definitely by far our best blocker on offense. We put him at tight end, he’s the one that really makes things go there.”

Lewellen, a third-year starter on the offensive line, said the Kings first started running the spread offense as well as the traditional wing-T his sophomore season when Ron Shaffer became the offensive coordinator.

“We grew up with [Scott] Mannering here, we grew up in the wing-T, so the majority of our plays were always running,” Lewellen said. “So it was definitely an adaptation experience that started basically sophomore year when coach Shaffer took over the offense and we started the transition to that spread-look offense at times. Coach [Jeff] Jones has really helped a lot with that, and Shaffer, they’ve taught us how to do both pass blocking and run blocking. We’ve had to learn how to block with our hands rather than block with our shoulder pads and a lot of the technique has been transferred over to us over the years.”

The Kings were coming off back-to-back 7-5 seasons entering this season playing a tough schedule. But they’re 11-1 this year after having beaten Pioneer twice and avenging their lone loss of the season to West Lafayette in the Hoosier Conference title game.

“We’ve put in a lot of work throughout the offseason and throughout the regular season itself,” Lewellen said. “Great coaching, coach Jones has been able to put us through a bunch of really good drills to teach us technique and everything we need to do. I think we started off the season pretty well, we brought back a lot of good starters from last season on the O-line and D-line. But overall I think it’s the coaching and our effort in the offseason and season has really helped us progress together as an offensive and defensive line.

“I think our senior class, we have a lot of starters who have started since sophomore year, just the increase in strength definitely, a lot of us have gotten a lot stronger over the offseason and I’ve put on like 40 pounds myself. Size difference is definitely a big thing, but I think we’ve improved a lot since last year technique-wise as well.”

The Kings face a big test tonight at Andrean. While the Fighting 59ers are unranked in the AP poll and ranked 12th in the coaches’ poll, they are a private school power in athletics. They have won two state championships in football, in 2004 and 2013.

“From what I’ve watched, Andrean’s a good team. They have some really big kids on the line, so it’ll be a tough game for us, but I think we’ll give them our best shot,” Garland said.

The 59ers’ losses this year are to Class 6A sectional champion Merrillville and Class 4A sectional champions New Prairie and Hobart. They have wins over the likes of Lowell, Munster, Hammond and Highland. They are coming off a 44-34 win at Rensselaer in their sectional final.

“Andrean’s an excellent football team,” Phillips said. “I think the keys to the game for us are No. 1, we’ve got to take care of the football. We noticed on film, it may be due to what Andrean’s doing, but they get a lot of fumble recoveries. The Rensselaer game, Rensselear fumbled on the 10-yard line, the very next series they fumbled on the 15-yard line, both were converted to scores by Andrean. Later on in the game Andrean got a scoop and score off another fumble. We saw the same thing in the Boone Grove game. We keep seeing fumbles. Probably the reason for that is they’ve been well schooled on how to punch those footballs out of there, so we’ve got to make sure we’ve got to make sure to take care of the football.

“Field position I think is going to be critical as well. They have a pretty good kicker. I thought Easton Good last week did an excellent job. LaVille had a really good kicker too and a lot of teams would let that ball hit at the 2 and bounce on in for a touchback. We stressed that all week, Easton did a great job of catching it inside the 5 most of the time and then getting it up to the 40 or better. He took that one in all the way for a 98-yard score. We’re going to have to have the same type of effort out of our kickoff return team. We got a punt block, we got a field goal block, all those things are part of field position as well. Our special teams have got to be huge again for us this week.”

The regional game is a rematch from the 2012 five-overtime classic that Andrean won 67-66 at Cass. The Kings had two extra kicks blocked and another missed in that game. Mannering lamented afterwards that he should have just went for 2 after every touchdown. With the way the defenses were struggling to stop the offenses in that game, that might have been the better bet. Andrean went on to lose to eventual state champion Fort Wayne Bishop Luers 35-21 in a semistate game the following week.

Cass kicker Ludwig Lenz, a foreign exchange student from Germany, is 2-for-2 in field goals and 47-for-57 in extra points (83 percent) this season, but Phillips hinted they may go for 2 again after every touchdown tonight.

“Sometimes it just depends on how the week’s gone. This week we haven’t had a lot of opportunities to practice our PATs, so it might be another one of those weeks where we go for 2,” Phillips said.

Kickoff is set for 7:30 p.m. EST on the grass field at Father Eckert Field.

Phillips said the 59ers run a shotgun spread offense. Senior quarterback Noah Hamilton has passed for 1,249 yards and 6 TDs. Junior Ryan Walsh is the leading rusher with 1,881 yards and 24 TDs.

The Kings are a senior-led group that has brought a lot of intensity to every game this year.

Garland said the Kings put in a lot of hard work to make this a special season.

“I think over the offseason a lot of the seniors and the juniors that play just wanted it really bad. So we all just worked really hard to get here to where we’re at right now,” he said.