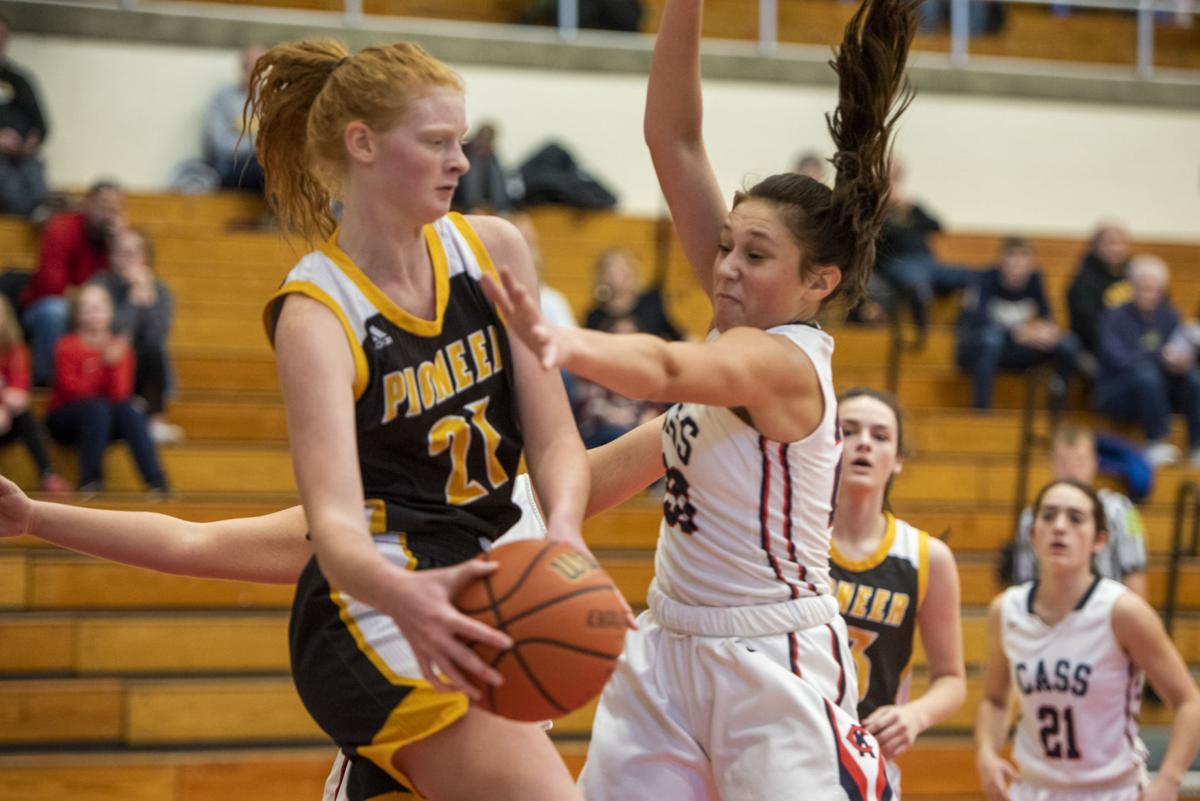 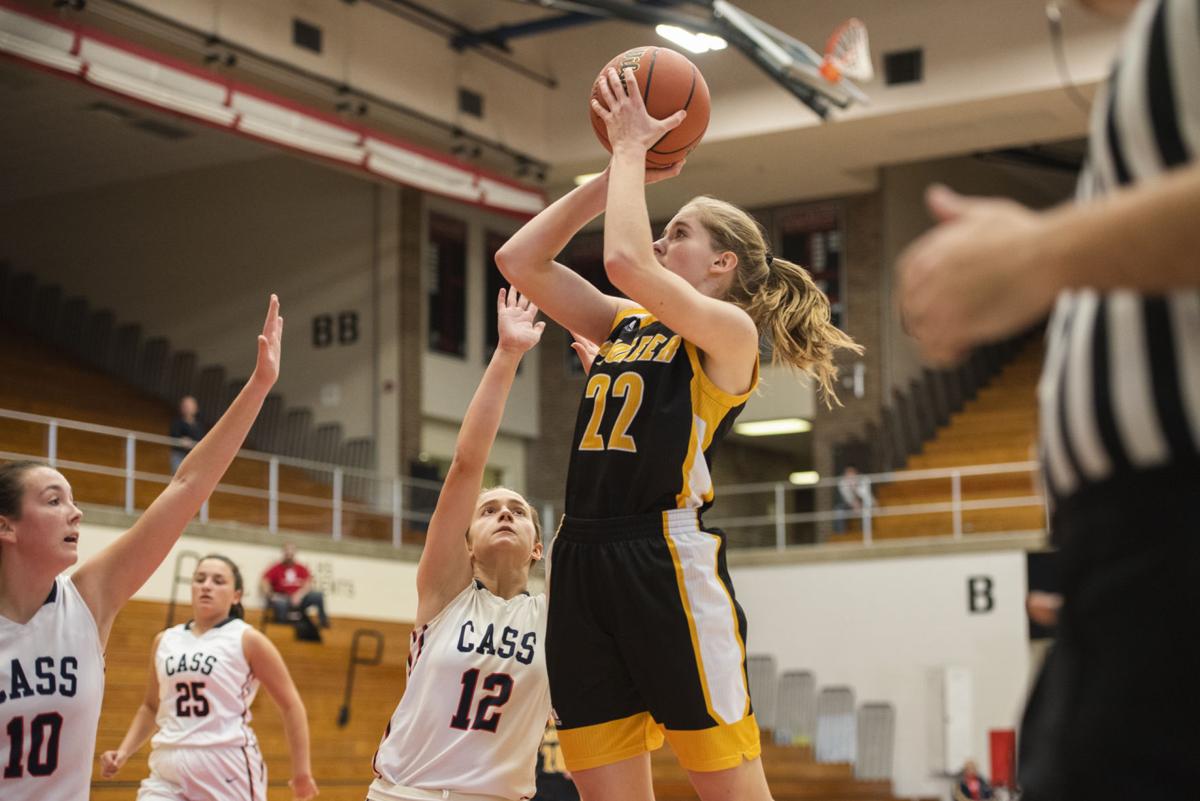 Pioneer’s Olivia Brooke goes up for a shot on Saturday. Tony Walters | Pharos-Tribune 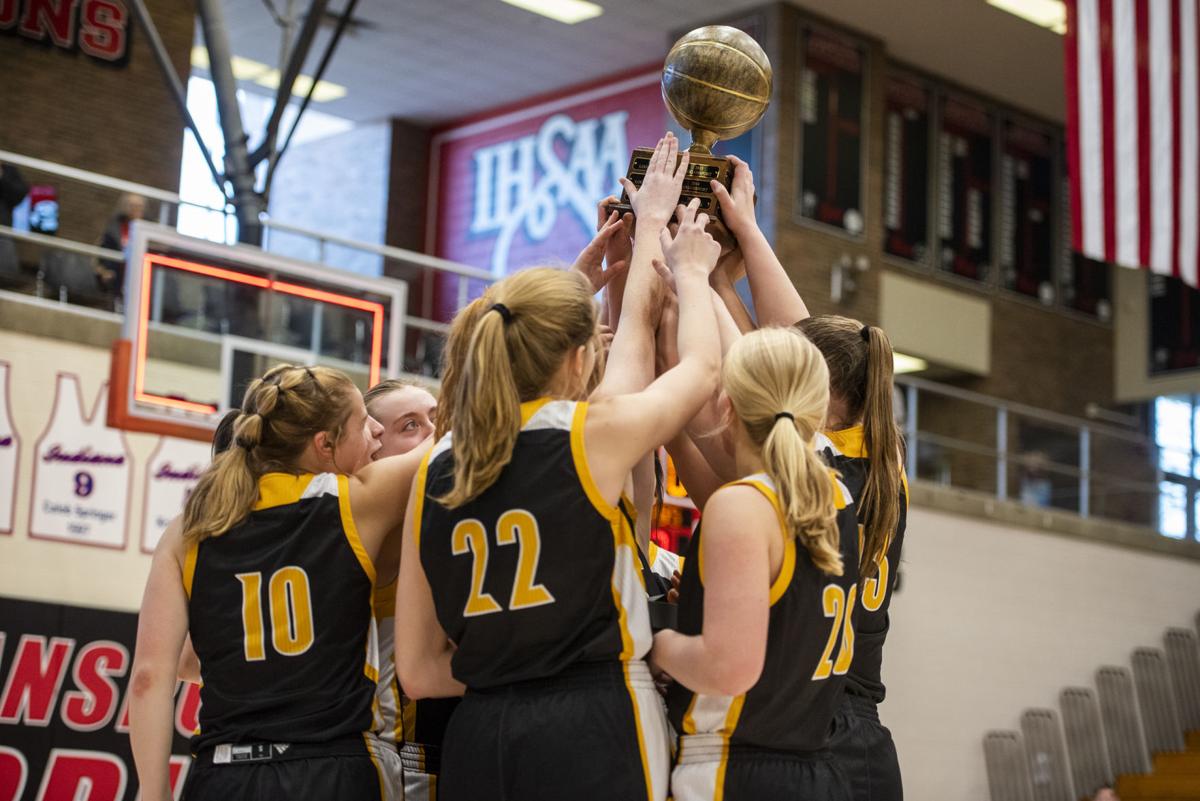 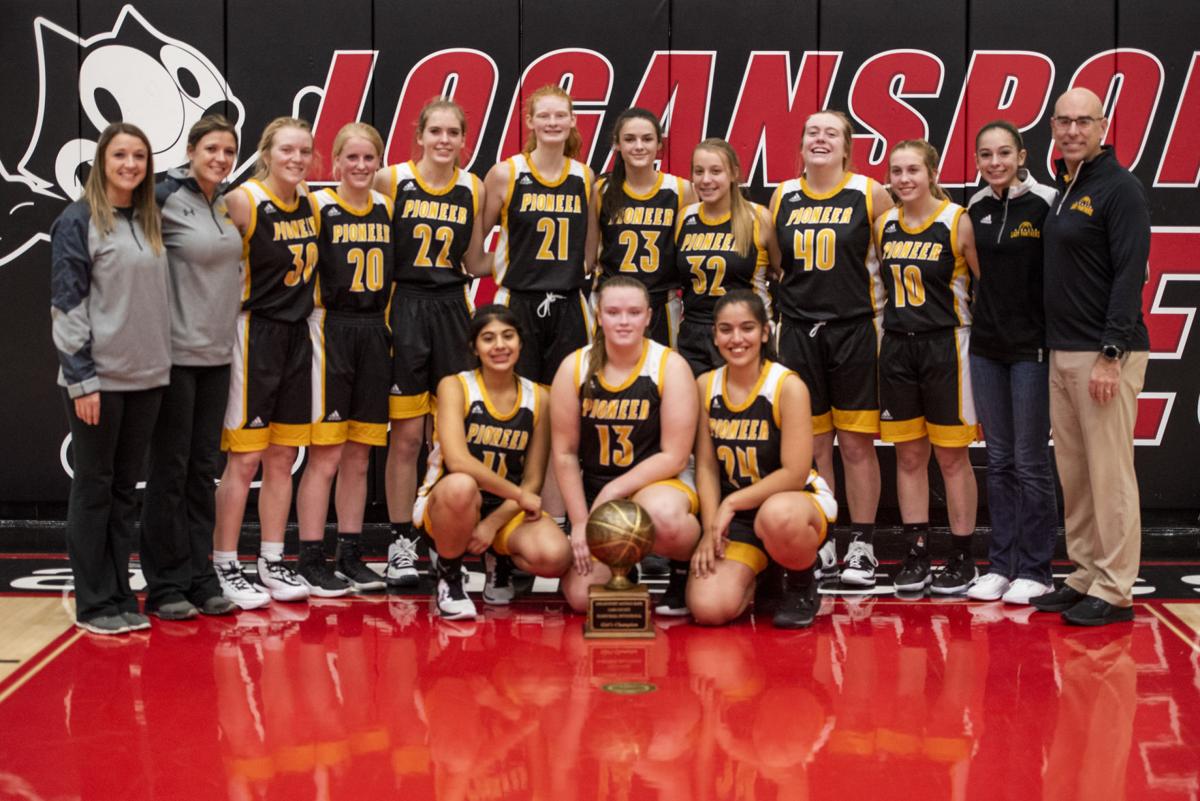 Pioneer is pictured after winning the county tournament on Saturday. Tony Walters | Pharos-Tribune 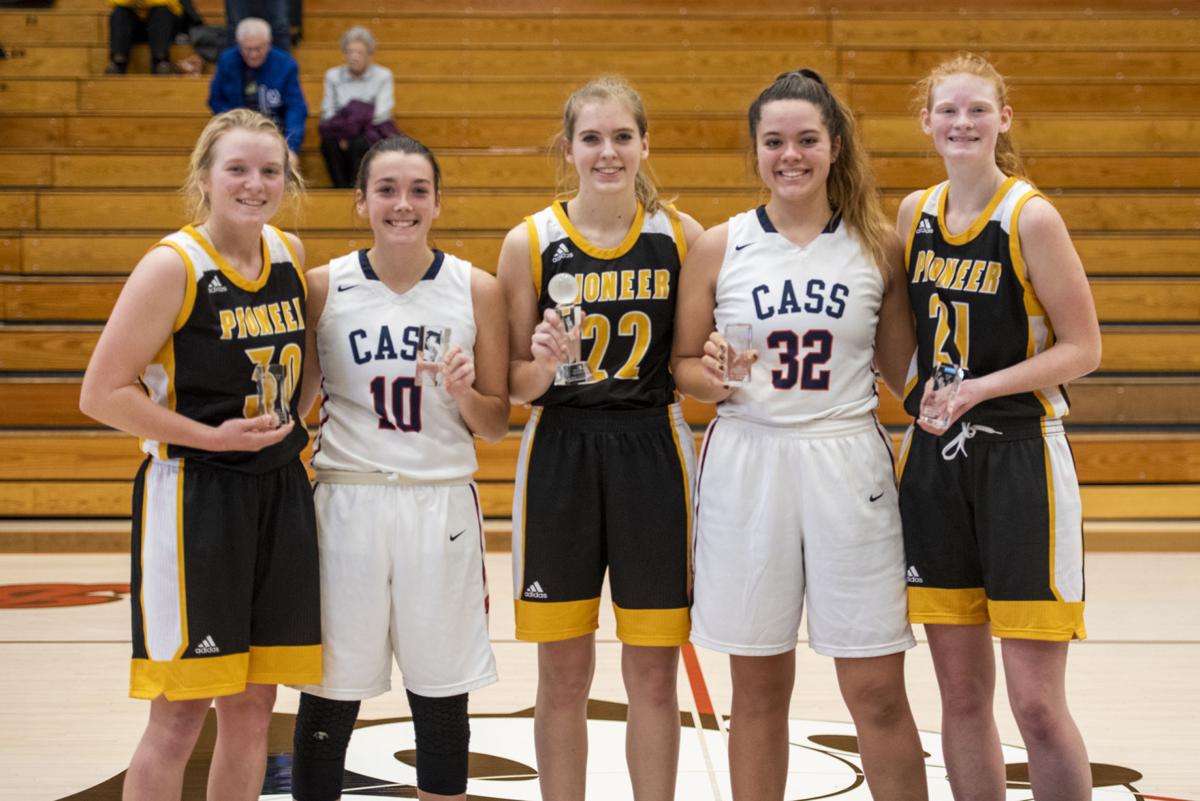 Pioneer’s Olivia Brooke goes up for a shot on Saturday. Tony Walters | Pharos-Tribune

Pioneer is pictured after winning the county tournament on Saturday. Tony Walters | Pharos-Tribune

The Class A No. 10 Panthers defeated Lewis Cass 40-23 in the championship game on Saturday afternoon at the Berry Bowl.

Olivia Brooke had 19 points, six rebounds and two steals and was named the tournament MVP for the Panthers (6-1).

Madison Blickenstaff had 10 points, eight rebounds, two steals and two blocks in the win. Hailey Cripe had seven points, five boards, three assists and four steals. Both were named to the all-tournament team.

Brooke earned the county tournament MVP award even though basketball is not her No. 1 sport. She will be the Loganland Volleyball Player of the Year later this month.

“I play all year around,” the 5-foot-10 junior setter said of volleyball.

She admitted she’s not even the best Brooke basketball player on the team this year.

“Everyone comes up to me and says, ‘your sister’s better than you,’ and I’m like, ‘yeah, she is,’” she said referring to Ashlynn.

Ashlynn Brooke is a freshman who is rehabbing a torn ACL but could return to the court this season.

“I think she will by sectionals,” Olivia said.

Olivia added to the rest of Class A when Ashlynn returns: “You should be scared.

“When you’ve got a D-I player who’s already got full rides to three different places...”

The Brooke sisters’ game complements each other well as well as the other Panthers, who have an athletic group that excels in multiple sports.

“We love playing together. We’ve played travel ball with each other for two summers now and it’s like we’re telepathic,” said Olivia, who added she takes basketball very seriously.

“It’s a basketball household,” she said.

Family patriarch and Pioneer coach Jeff Brooke said he was happy with how the Panthers played in wins this week over Cass and Logansport.

“We had some kids step up today. Macee Weisenburger and her sister Mandee Weisenburger today, Hailey Cripe did an amazing job of taking the ball up the floor today under that pressure. I know they were running a box-and-one on her, so that’s always a little difficult, she did a nice job of handling the pressure. Olivia stepped up. Joey Walker stepped up and did a nice job for us. We’re excited to see what this does to launch us into the next part of the season,” said coach Brooke, who also thanked the bank and Logansport athletic director Brian Strong and company.

“They do a great job of running a great tournament, we’re excited to be here and glad to be here,” he said.

Cass coach Kyle Amor saw positives from his squad this week. The Kings defeated Caston and were within 18-13 of Pioneer early in the second half.

“I think if we continue to play defense like we have, we can hang around a lot of teams on our schedule,” Amor said. “We’re still struggling finding ways to score. I think we’ve got kids who are understanding they’re capable. I think Kyndal is realizing she’s that kid for us. I think Paxtyn has always kind of known that. We still struggle getting it inside to her, but teams are realizing that things revolve around her a little bit for us and they’re doing a good job guarding her. So we’ve got to tweak some things offensively but I like how our kids are improving.”

Cass travels to Rossville on Tuesday, while Pioneer travels to North White on Thursday.

Caston was within 32-29 when Logansport ended the contest with a 15-0 run over the final 11:30 in the consolation game at the Berry Bowl.

Elle Deardorff had 10 points in her second game back returning from a torn ACL for the Berries (1-7). Emilee Cripe and Erica White scored nine apiece. Gabby Richie added five and Kendra Sutton chipped in four.

“I think there at the end we were just a little bit more disciplined and we ran things with a little bit more structure to get that lead,” Logan coach Meranda Cooper said. “And then when we got that lead, it was very concentrated attacking, we don’t want to chuck 3s, we want to make sure we get to the paint, get a layup. If it’s not there, pull it out, just trying to be more disciplined. I think the girls did a good job at the end playing that way.”

Cripe was named to the all-tournament team. She’s an undersized post who brings a good presence to the team on offense, defense and rebounding.

“Especially today Emilee had a big test against their big girl. She did a great job of holding her own and really battling in there,” Cooper said.

Jordan Clingler had 15 points and was named to the all-tournament team for the Comets (0-9). Maddison Smith scored five, Emily Holt had three and Aubrey Dague, Sophie Jellison and Layne Oliver added two apiece.

The Comets had a good showing this week with competitive games against Logansport and Cass and were able to cut their season turnover average in half over the last two games.

“We had a solid first day of wrestling,” Cass coach Nate Burrous said. “We have a young team with a lot of kids who are brand new to the sport. They wrestled hard.”

Caston placed seventh at the event.

“Overall I was very happy with our wrestling today,” Caston coach Mark Evans said. “Music was great with three falls, Hickle had two. I’m excited for the rest of the season.”

Carroll completed a weekend sweep with a win over visiting West Central.

The Cougars defeated Frontier 54-45 on Friday. They host Caston on Friday.

Zach Townsend posted a double-double with a career-high 28 points and 11 rebounds to lead the Oracles (2-2) over the visiting Rebels (0-4).

Hayden Berenda led the Rebels with 14 points, followed by Austin Miller with 11, and Terron Welsh with 10.