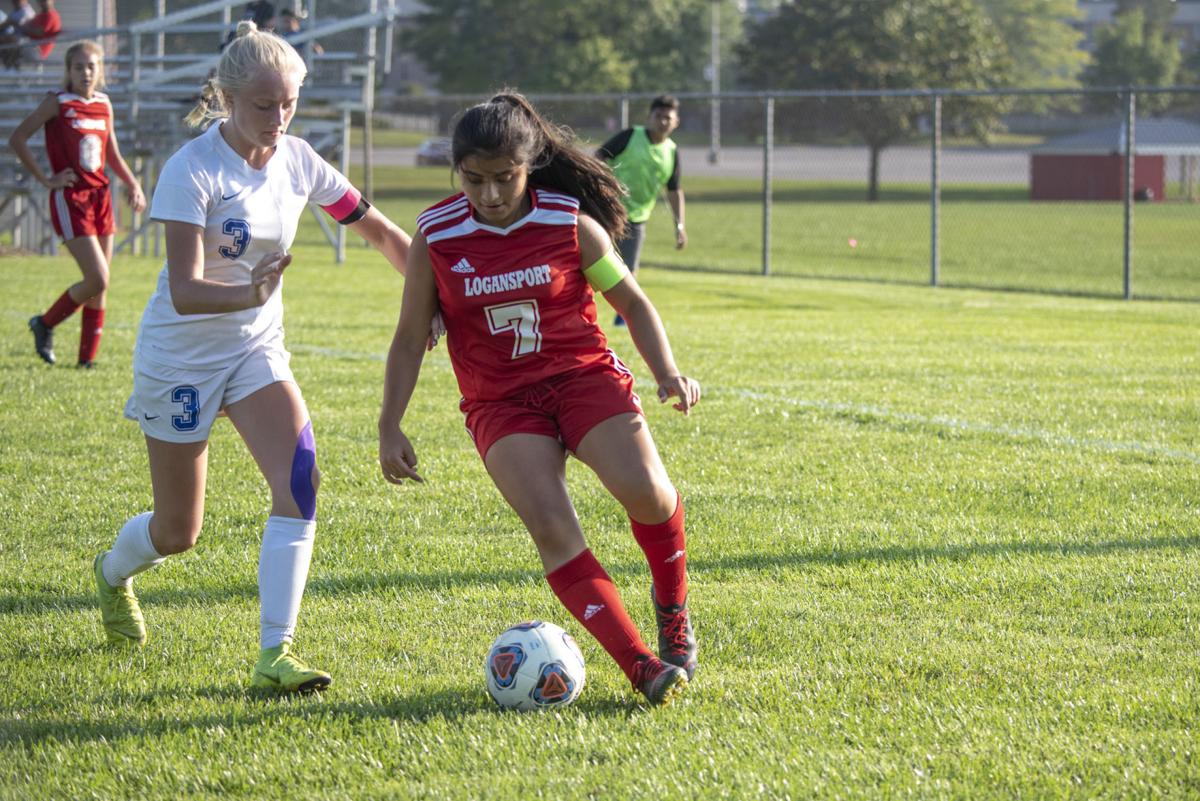 Logansport’s Jenny Requeno handles the ball against Kokomo on Tuesday. She scored four goals in the contest. 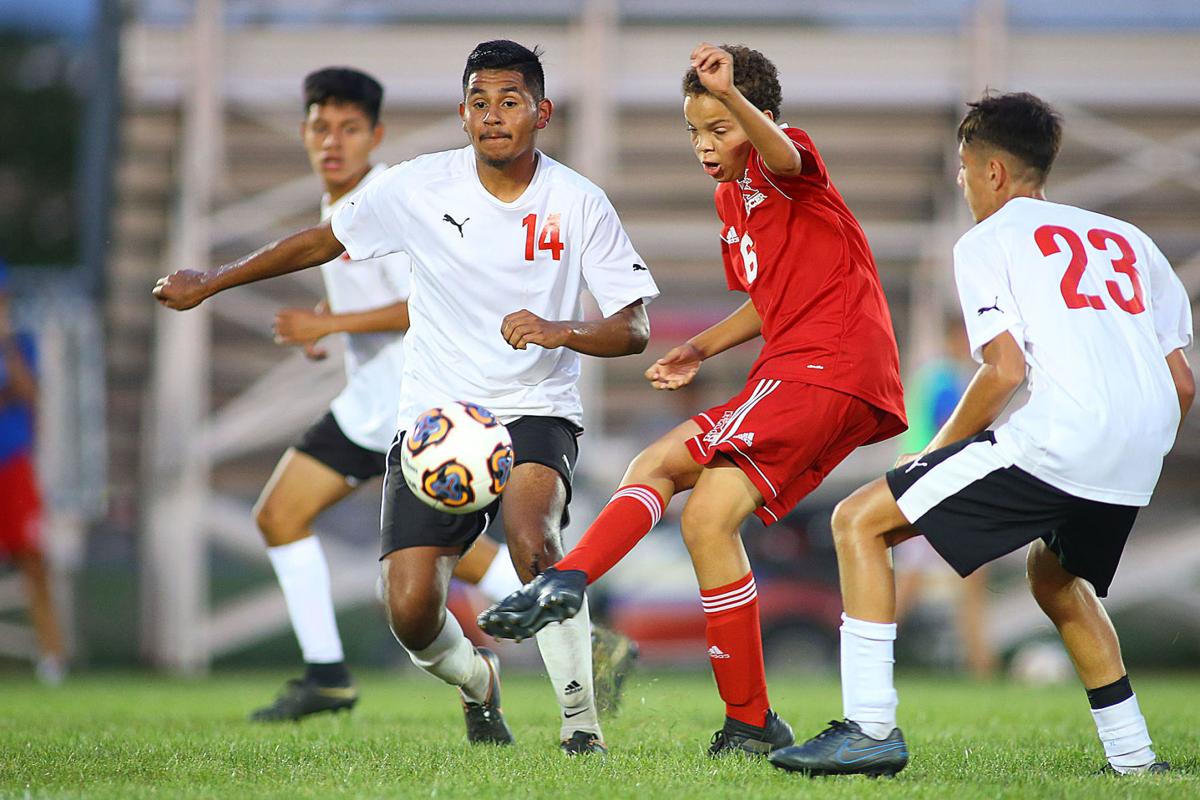 Kieran Morrison sends the ball between defenders Juan Valencia and Abel Leon in soccer between Kokomo High School and Logansport High School on Tuesday. Tim Bath | For the Pharos-Tribune 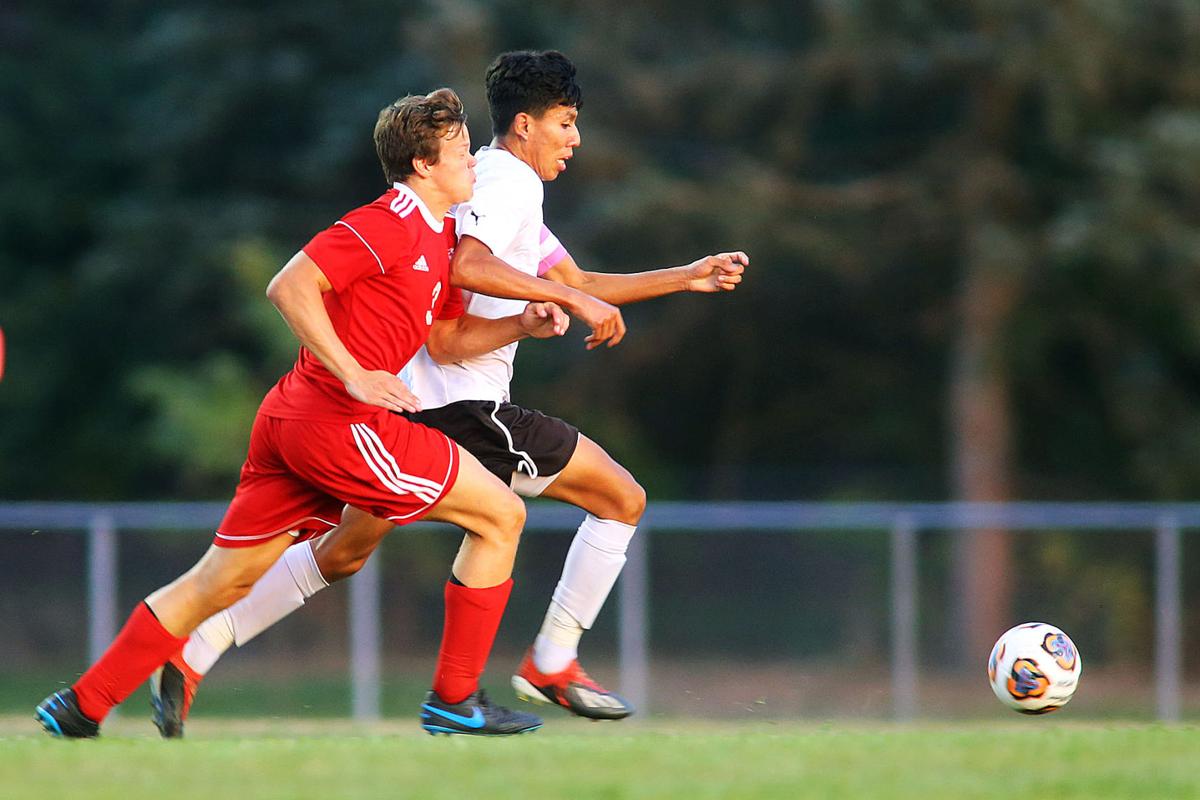 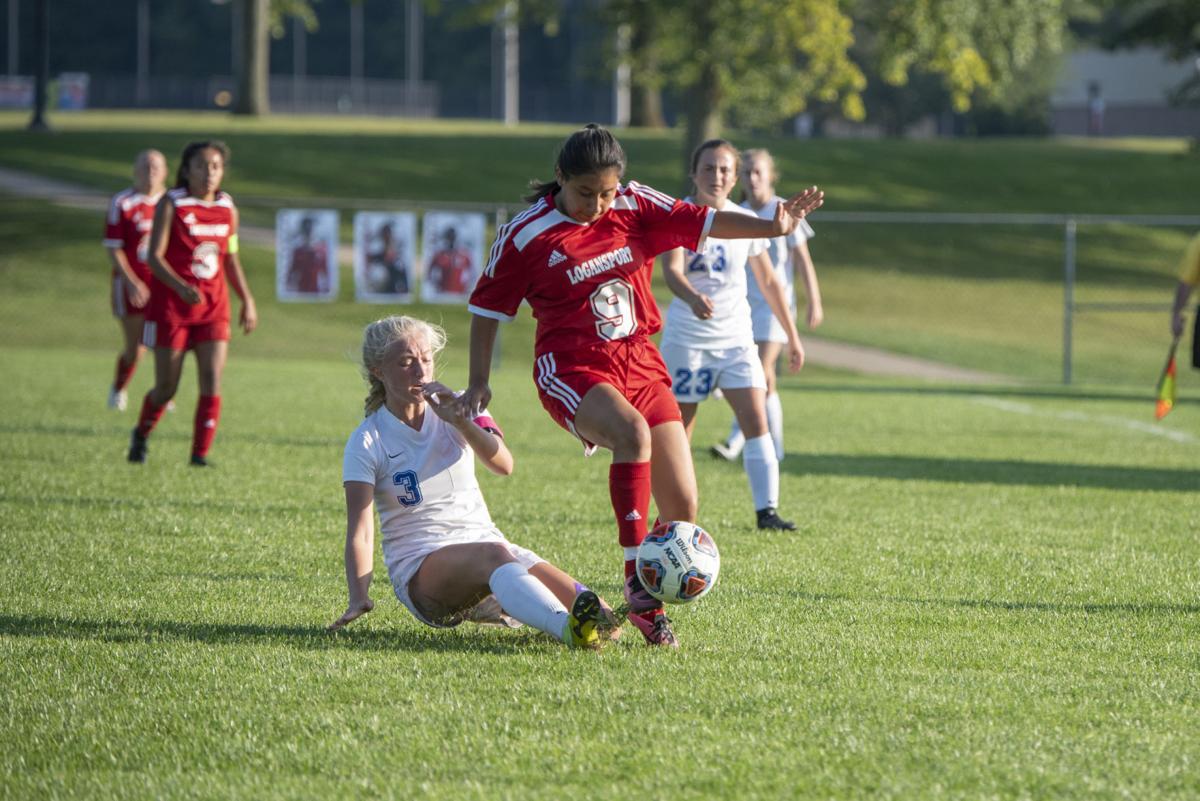 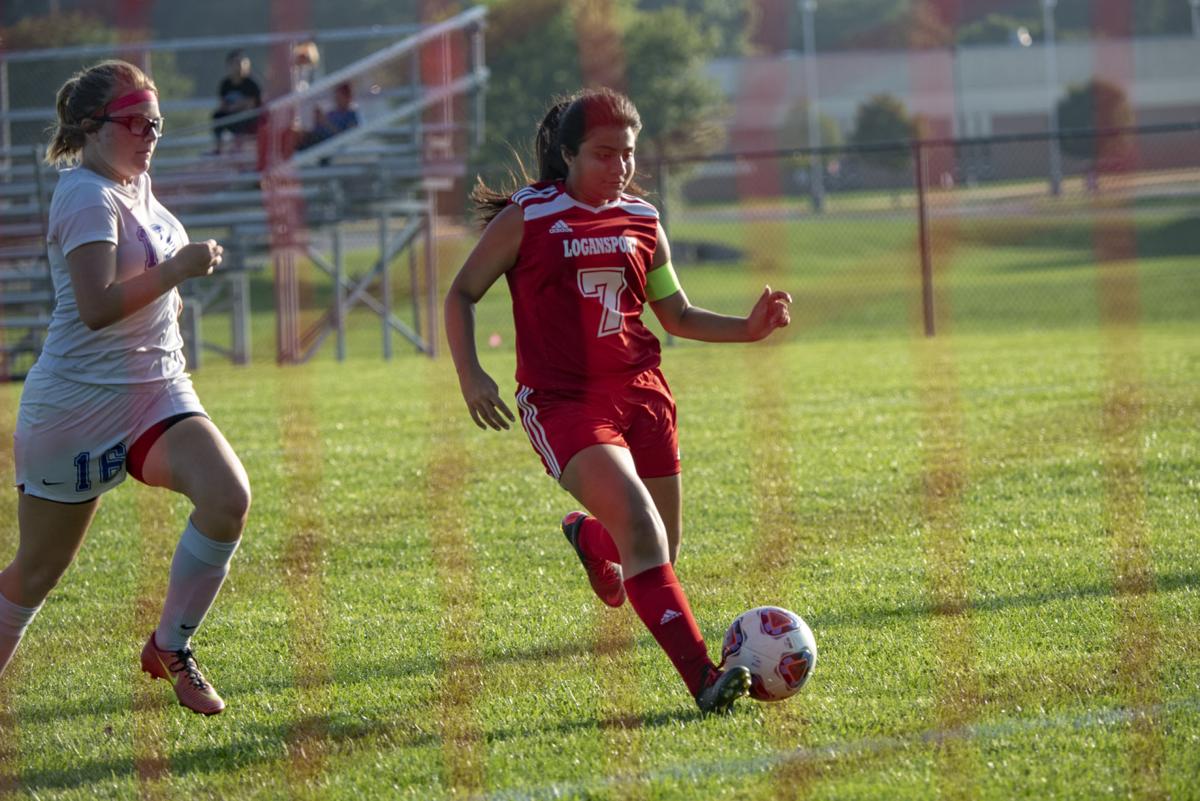 Logansport junior Jenny Requeno, shown playing earlier this season, scored her 33rd goal of the season in a sectional game on Thursday. 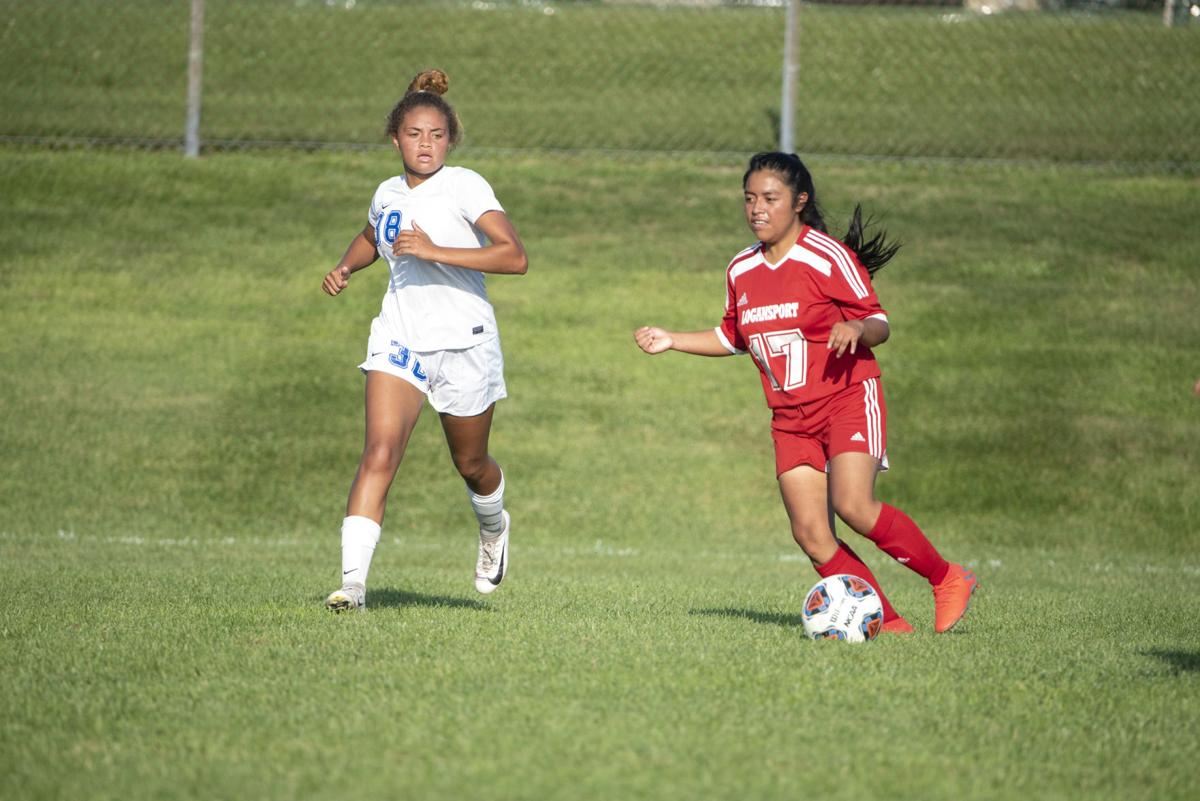 Logansport’s Jenny Requeno handles the ball against Kokomo on Tuesday. She scored four goals in the contest.

Kieran Morrison sends the ball between defenders Juan Valencia and Abel Leon in soccer between Kokomo High School and Logansport High School on Tuesday. Tim Bath | For the Pharos-Tribune

Logansport junior Jenny Requeno, shown playing earlier this season, scored her 33rd goal of the season in a sectional game on Thursday.

Logansport showed a quick-strike offense in a 4-3 win over visiting Kokomo in girls soccer on Tuesday.

The Berries erased a 3-1 deficit by scoring three goals during a six-minute stretch in the second half.

Jenny Requeno did the honors, scoring all four of the Berries’ goals in the win.

The junior now has 21 goals for the season, including 15 in the last three games.

“I couldn’t have done it without the team helping out. Without their passes, I could not have gotten those goals,” Requeno said.

Requeno struck in the game’s second minute. Following a mistake on the goalkeeper’s kick, she made a nifty move to get a clean look in the box and found the back of the net.

The Wildkats answered with a goal on a penalty kick and then a free kick just outside the box, and they took a 2-1 lead at halftime. Both goals were kicked in by Maya James.

Another defensive miscue led to a point-blank open shot that Nicole Burdette converted into a goal that gave the Wildkats a 3-1 lead four minutes into the second half.

The Berries started their comeback when strong play by Arlene Frutos led to a fastbreak. Joana Valencia then found Requeno who did the rest, making it a 3-2 game with 26:40 remaining.

The Berries put together another successful fastbreak when Keyla Cubias found Requeno who hit the ball into the net with her left foot to give the Berries a 4-3 lead with 20:46 left.

While her nickname is Teeny, senior goalkeeper Justine Brown also came up big. Her leaping save when she caught the ball at the top of her jump with outstretched hands with 23:40 left kept it a tie game at the time.

“It started getting all jumbled during that sequence, so there were just a lot of anxious plays. So I trusted my defense and I made the play,” Brown said.

Brown also made a scoop save on a tough try with 3:00 left as the Wildkats made a late scramble.

Moments later defender Linney Fragoso made a clean stop in the box on a strong kick by Kokomo.

And Logansport coach Todd Reiff made sure to mention the play of defensive standout Yami Mateo as she was able to put a stop to a lot of Kokomo’s best offensive chances.

“Yami’s been one of our stellar defenders. I talk to some of the people who watch our games and they really love watching her play,” Reiff said. “Her motor never ends. To get 80 minutes, we rarely ever sub her out, she’s just got an endless motor and saves us a lot of times.”

The Berries (4-6-1, 1-3 NCC West) won their third straight game and secured a spot in the NCC 5-8 place tournament with the win.

And it’s always big for Logansport to beat Kokomo.

Logan hosts Rochester at 5 p.m. today ahead of the boys team’s 7 o’clock home game with Western. It’ll be a short 24-hour turnaround for the Lady Berries, who erased a 1-0 halftime deficit in a 5-1 win over Rochester on Aug. 31.

“Can’t get comfortable,” the Lady Berries said in unison.

The Berries (8-1-2, 3-0 NCC West) secured a spot in the NCC 1-4 tournament and a chance to play for the conference title with a win at Kokomo.

Juan Perez scored his 26th goal of the season in the 14th minute on an assist by Kolten Barber to get Logan out to a 1-0 lead.

Pedro Silveira scored a goal on an assist by Lenny Casimiro to give Logan a 2-0 lead with six minutes remaining.

Gabriel Araujo-Lage scored a goal for Kokomo with three minutes left before the Berries held on.

“First time since they split our conference into East and West that we are locked in to the top two spots to compete for an NCC title. That was a team goal and we earned it,” Logan coach Mike Turner said. “We were not as efficient on the finishing end but we had lots of possession. We dominated most of the possession and our pressure was great. Kokomo did not have many shots on goal, two for the game. Our defense for 77 minutes was stellar.

“We made some nervous touches on clearances and unfortunately gave up a goal. Something to work on. We celebrate achieving our goal and staying in it even when we were tired and out of sorts. Great team victory.”

Logan hosts Class 2A No. 9 Western at 7 p.m. tonight for senior night.

Braden Breed had three goals and an assist to lead Caston to a win at North Miami.

Noah Howdeshell had a goal and two assists for the Comets. Noah Rogers added an assist.

Caston led 3-0 at halftime and held on in the second half.

“Solid performance by the kids,” Caston coach Nars Sanchez said. “Great work all around. Braden and Noah got on the scoresheet and our mids got some assists. The backline would’ve liked to keep a clean sheet, but it wasn’t in the cards today. Still a lot to work on, and we hope to better come our next match.”

“We rested [Madison] Blickenstaff, she was under the weather, had the flu,” Pioneer coach Rod Nies said. “It was Macee Weisenburger’s first outing for the season. It worked out. It made some room for her to get in there and get reps. We had a balanced attack, everyone got in on the action and we were able to play quite a few people.”

Pioneer is now ranked No. 1 in Class A ahead of a top five of Trinity Lutheran, Loogootee, Cowan and Lafayette Central Catholic.

“That shocked me. I didn’t think we’d go up three spots,” Nies said. “It doesn’t mean anything. Those ratings and rankings don’t mean anything this time of the year. That’s where we want to be at the first weekend in November.”

Pioneer competes at its final regular-season tournament on Saturday at Leo. The Panthers will face Lakewood Park Christian, South Adams and Leo in pool play.

“Defense was great tonight,” Cass coach Katie Easter said. “Hitting was off, we played a scrappy team so it was tough to put the ball down.”

“Northwestern is a great team. We are too but we just didn’t show up with the right mentality to compete,” Easter said.

Gunter, Florence E., 97, of Logansport, services will be at 2 p.m., Friday, Oct. 2, 2020, at Rans Funeral Homes & Crematory, Harrison Chapel, 304 S. Chicago St., Royal Center. Pastor David Bigger will officiate. Visitation will be from 12 p.m. until the time of the service on Friday. Bur…

William Cole Jr., 69, of Galveston, passed away unexpectedly Tuesday, Sept. 22, 2020, at his home. No services are planned at this time.