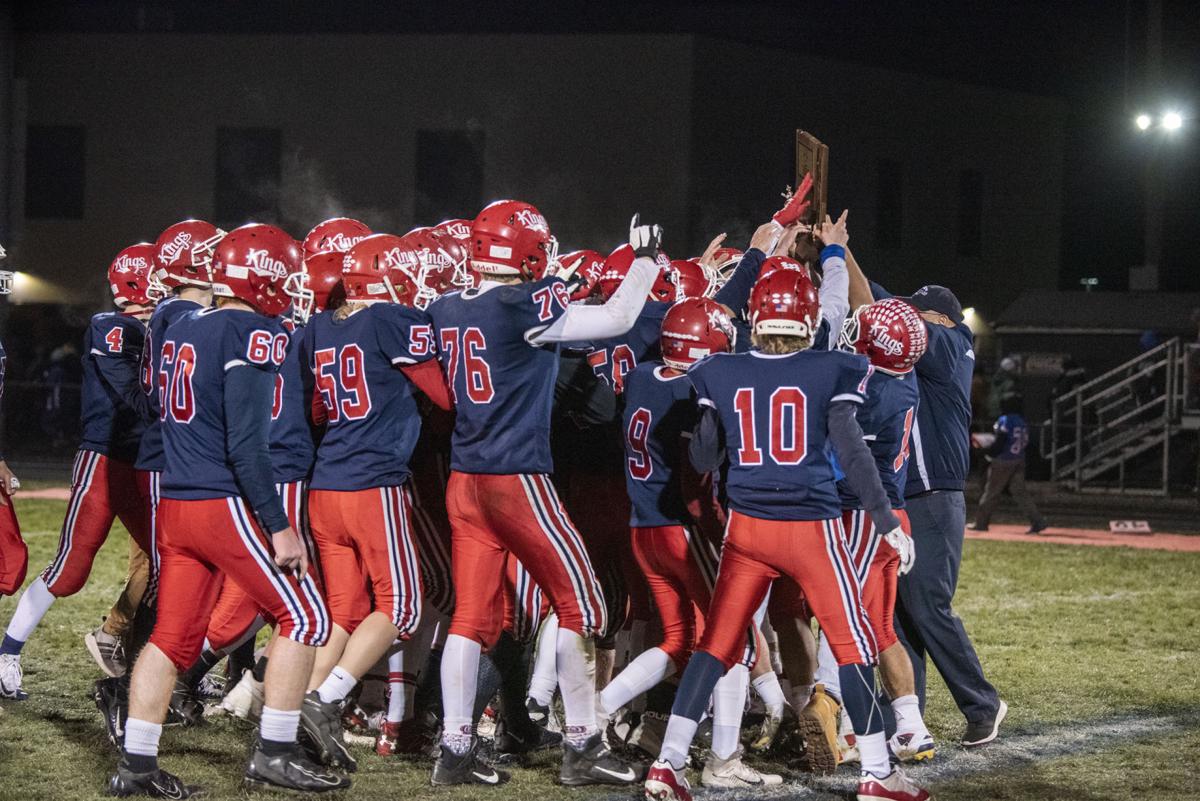 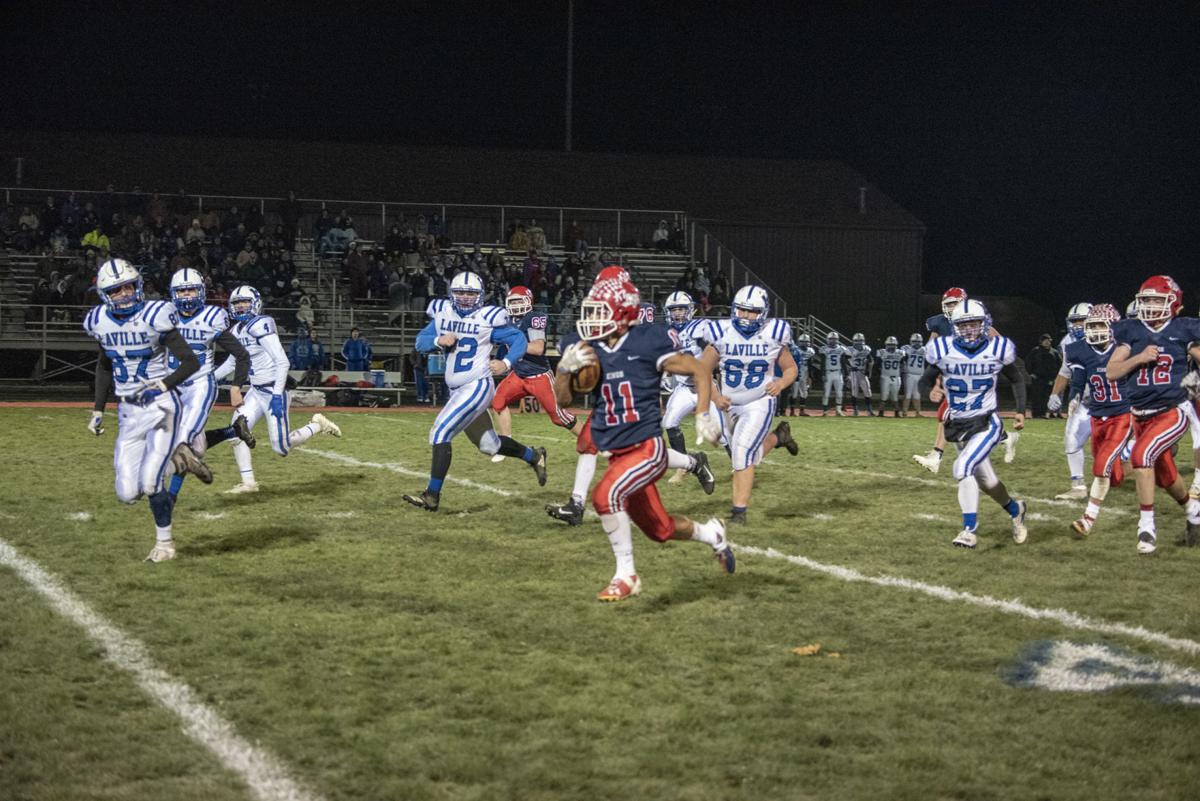 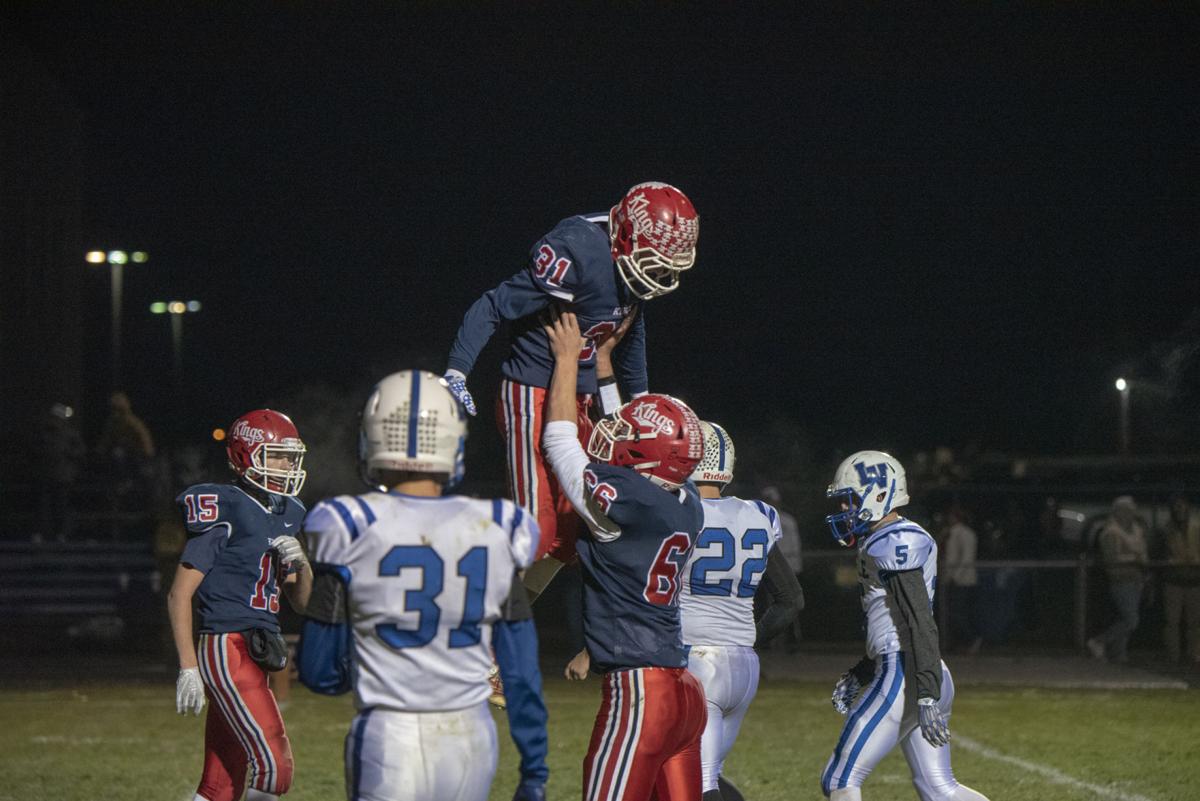 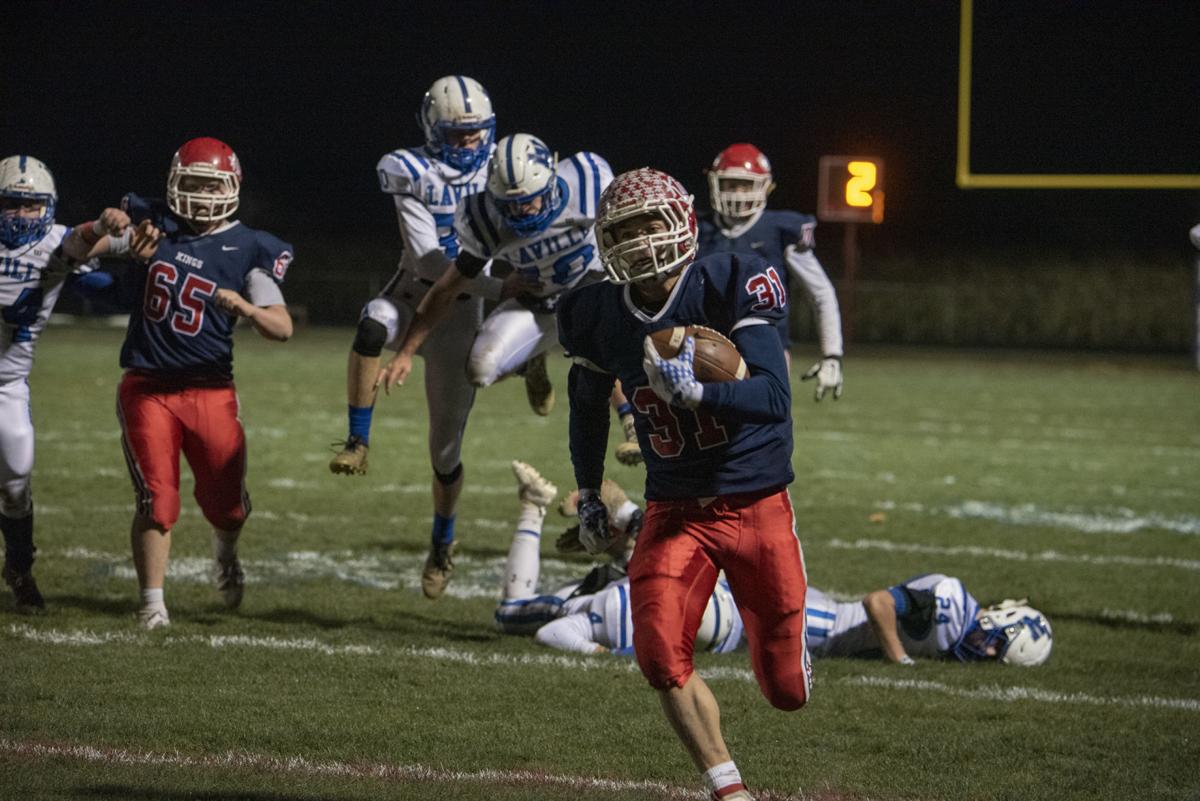 WALTON — With freezing conditions on the field and a little bit of ice forming on the grass at Owens Memorial Field, neither the conditions nor the LaVille Lancers could stop the Lewis Cass Kings from making big play after big play.

The No. 1-ranked Kings drubbed the No. 12 Lancers 56-21 on Friday night to win the Class 2A Sectional 34 championship.

It was the Kings’ eighth sectional title in football and first since 2012.

It was also coach Jeff Phillips’ first sectional title in his 12 years of being a head coach, though in his 35 years of coaching overall he’s been an assistant on multiple semistate teams at Jasper and later at Cass when Scott Mannering was the head coach.

“There’s been a lot of hard work that’s gone into this. Our senior class was runner-up the last two years and they were determined from the get-go, from the end of the sectional game last year to this, they had this on their radar. They did what it took to get the job done from day one.”

The Lancers (9-3) got off to the good start they needed. They forced a three-and-out on the Kings’ (11-1) first possession and then opened up the playbook during an 11-play, 70-yard march down the field. Nathan Watts capped the drive with a one-yard touchdown run to give LaVille the early lead.

The Lancers then forced another three-and-out and another punt. But Caden Zeck came to the rescue, intercepting a pass and returning it 10 yards for a score to get the Kings back on track.

That started an avalanche of big plays for the Kings, who didn’t punt again after their first two possessions.

Zeck again showed off his speed with a 26-yard TD run. His 2-point conversion run made it a 16-7 game. In fact the Kings converted all seven of their conversion attempts on the night for 2 points, adding another touchdown worth of scores to their seven touchdowns.

Eric Bird got his hand on a punt attempt for a partially blocked punt. Then it was Gabe Eurit’s chance to show off his speed, racing 34 yards for a score to make it 24-7.

The Lancers quickly answered. Ayden Doyle’s 49-yard pass to Connor Manges set up Doyle’s one-yard TD run that made it a 24-14 game.

But it was time for Easton Good to show off his athleticism, as he zigged and zagged his way across the field and showed off his speed as well during a highlight-reel 92-yard kickoff return for a touchdown.

The Lancers attempted a 49-yard field goal on their next possession, but Nathaniel Moss blocked it and Zeck picked it up and returned it down to the eight-yard line. Eurit scored from four yards out to make it 40-14.

The Kings had another chance to add on to their lead before halftime but they were out of timeouts and time was quickly running off the clock when they faced fourth-and-goal from the two-yard line. They barely got a play off and it was not very organized and quarterback Isaac Chambers threw his first interception of the season to end the half. But it was a good time to get it out of the way as the Kings led by 26 at the break.

The Lancers again had a good start to the second half. They got a stop by stuffing a fourth-and-2 play on the seven-yard line. Soon after Doyle hit Manges for a 70-yard touchdown pass to make it 40-21.

But Cass answered right back when Chambers hit Zeck for a 47-yard TD pass.

Chambers later dropped the ball in perfectly to Joey Humphrey into the end zone from 28 yards out to make it 56-21 and a running clock was implemented with 11:54 remaining.

Doyle had 213 yards passing and a TD but it took him 25 attempts with 12 completions. LaVille was held to 60 yards rushing on 22 attempts on the night (2.7 per attempt).

The freezing conditions did not slow the Kings.

“We’ve been practicing every single day, when it’s freezing temperatures out, we’re out practicing doing our thing,” Good said. “We’re used to this. We like to call it Lewis Cass football weather. Not a lot of other teams might consider it that, they might complain about the weather, but we love it.”

Good injured his knee during the third quarter but was able to return.

“I got someone thrown into the outside of my knee and push it in, it was just one of those things that hurts for awhile and I could not not play at the end of the game. So no matter what it was, I’d be playing on a stretcher out there,” he said.

Zeck also had a huge game. He said the difference of the contest was: “Really it was physicality and just the hogs up front. The guys got after it after awhile. It was cold, but once they warmed up it was scary to see. We were just more physical and we had the crowd behind us and it’s hard to play bad when you’ve got a crowd behind you.

“It feels great but we’re not done yet. We’ve got another mission on the board. This is just an accomplishment. We’re going to celebrate it now but come Saturday we’re ready to play again, we’ve got to get ready for the next game.”

Cass travels to Andrean next Friday to play for a regional championship. The Fighting 59ers (9-3) are unranked in the AP poll and ranked 12th in the coaches’ poll but are a two-time state champion. It’s a rematch from the classic 2012 regional game Andrean won 67-66 in five overtimes at Cass.

The Andrean-Rensselaer game was still in the third quarter when the Cass game had ended. Andrean went on to win 44-34.

“Whoever we play next week, I don’t know, we don’t care,” Good said. “We just play Lewis Cass football and just keep winning, that’s all we’ve got to do towards the end of the year.”