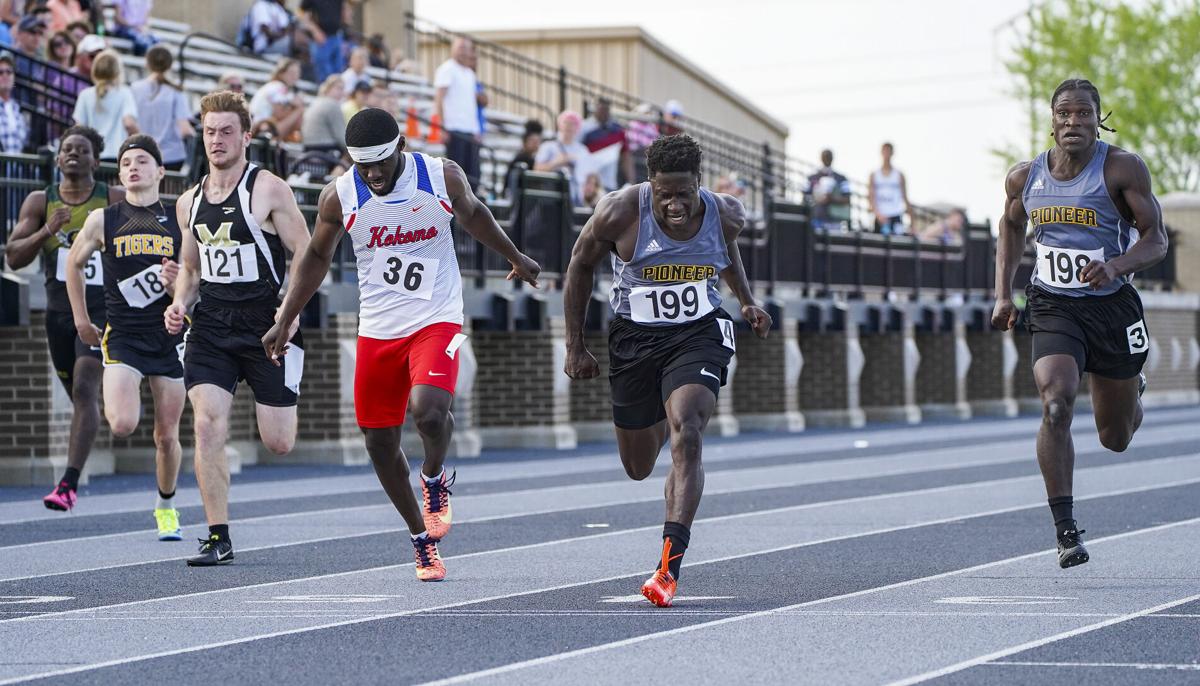 Pioneer’s Ezra Lewellen crosses the finish line in the 100 meter dash followed by his brother Addai and Kokomo’s Plez Lawrence during the boys track and field sectional at Kokomo High School on Thursday, May 20, 2021 in Kokomo. 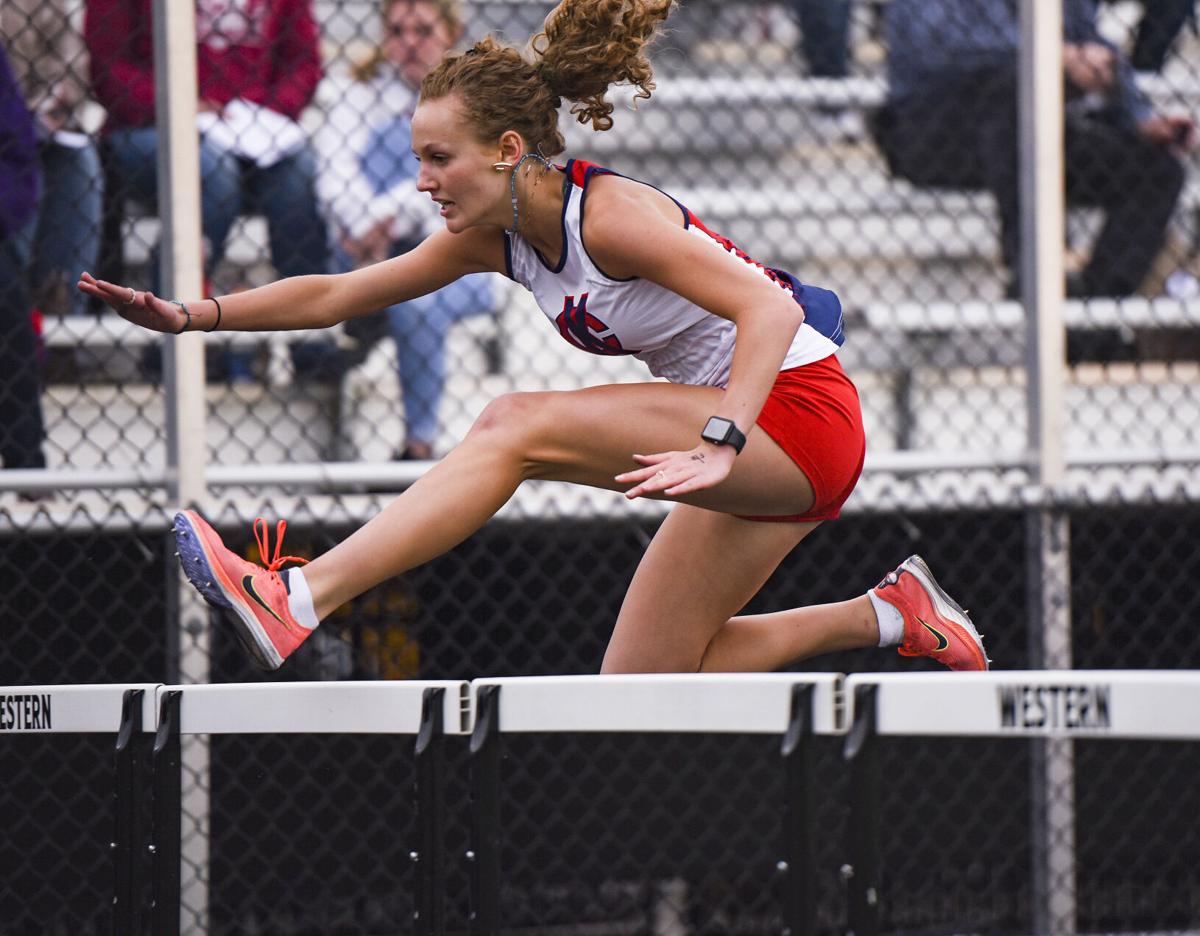 Lewis Cass’ Liberty Scott competes in the 100 meter hurdles during the girls track and field sectional at Western High School on Tuesday, May 18, 2021 in Russiaville.

Pioneer’s Ezra Lewellen crosses the finish line in the 100 meter dash followed by his brother Addai and Kokomo’s Plez Lawrence during the boys track and field sectional at Kokomo High School on Thursday, May 20, 2021 in Kokomo.

Lewis Cass’ Liberty Scott competes in the 100 meter hurdles during the girls track and field sectional at Western High School on Tuesday, May 18, 2021 in Russiaville.

Cass County has a Super Six group of athletes who are set to compete at the IHSAA Track and Field State Finals this weekend.

Lewis Cass, Logansport and Pioneer have two athletes apiece who are set to compete at the events. The boys event will be held today and the girls event Saturday. Both events will be held at Ben Davis High School in Indianapolis.

The following are preview capsules of each of the athletes in alphabetical order.

Camp is mainstay on the All-Loganland volleyball team and continued to show how athletic she is this spring.

The 5-foot-10 senior had an impressive double at the county track meet by winning the shot put (36-10) and 400 dash (1:06.1). She followed that up by advancing past the Western Sectional in both the shot put and discus. At the Goshen Regional, she had a personal-best throw of 38-1 in the shot put to place third and advance to the state finals.

“I am very surprised but proud of myself,” she said of making it to state. “I worked pretty hard this season to get to where I’m at. I’m just glad that it happened. It was my biggest dream and I finally accomplished it.”

She said Lewis Cass senior Averi Parker has helped push her in the shot put. Her win at the county was big for her.

“I know that I did it once and I want to do it again,” Camp said. “But she’s an amazing hard worker and she deserves to be where she’s at.”

Camp had a rare double at the county by winning the 400 as well.

Camp is seeded 27th at state. She said she’s just hoping to finish higher than her seed.

She plans to play volleyball at Manchester University. She said she has an opportunity to throw there on the track team and is considering it.

LaOrange, a senior, has advanced to the state finals in the long jump in his first season of track.

He had a personal best long jump of 21 feet, 8.75 inches at the Kokomo Regional to place fourth. He originally didn’t know he was going to state but got a callback the next day.

“That was awesome. I was just in Kokomo driving around. The last thing I expected was to hear that. It was a great feeling,” he said.

LaOrange has been competing in the long jump for just three months. He credits Logan assistant coach Chad Handschu for helping him succeed so quickly.

“That was just an amazing experience, the whole team family,” he said.

LaOrange was a late bloomer in football as well as it was just his second year of football. He credited coach Mike Johnson for getting him to tryout for track.

“My coach signed me up without telling me because whenever we’d do the vertical or broad jump training I’d always have crazier numbers than everyone else and he just signed me up one day and told me I have practice tomorrow for track,” he said.

LaOrange is seeded 20th at the state track meet.

Addai and his twin brother Ezra have qualified in three events each.

“I’m feeling good,” said Addai, who pulled up with a thigh injury on his final event, the 200, at the Kokomo Regional. “For the long jump I would like to place in the top three. That might be really hard but I’m willing to push myself. In the 100 there are really fast kids there so it’d be really hard to get into the finals but if I get in the finals that’d be an achievement for me. In the 300 hurdles I just want to see my time go down and continue to push it.”

Addai added he’s close to the school record in the 300 hurdles at :39.8 and that is another goal. He’s just in his first year of running the event and credited Pioneer assistant coach Brenton Mersch, who had a chance of reaching the state finals last year in the event before the season was canceled, for helping him.

“I’m just hoping to make the finals for the 100 and the hurdles and for the 400 we have heats. I’m just trying to get top nine for all my events. If I can get better, that would be great,” he said.

It’s surprisingly the twins’ first appearance in the state track meet for either one of them.

“With last year getting canceled we would have thought we would have had a chance to go to state but this year is our last year and we’re just going to try to enjoy it,” Ezra said.

Ezra added he’s cut three seconds from his 400 time from two years ago. His 100 time is close but he’s more consistent now.

Parker, a senior, is 3-for-3 in reaching the state finals her high school career.

“My goals are to finish top three in both events is my biggest goal but just being able to be on the podium would be great,” said Parker, who was the Goshen Regional champion in the shot put and runner-up in discus. “In shot put I’m seeded 10th so it’d be awesome to get myself up there and throw at least a 44 and be top three. Discus, my ultimate goal would be to win state and I think I can do that, but it’s going to take a lot of mental game.

“This year especially being my senior year I’ve had to learn to calm down and just trust your body and know what it’s doing.”

Parker said her main throwing coaches in high school have been her father, Jonathon Parker, and Cass assistant Jeff Jones.

Parker is set to graduate from Cass on Sunday. She said she will join her college track team at Hillsdale College in Michigan in late July. But before that she’s hoping to have a big day at the state meet on Saturday.

The sophomore is enjoying a breakthrough season in her first season of high school track.

She opened eyes by winning the 300 hurdles at the Western Sectional in 48.22 seconds, outdueling Taylor senior standout Makala Pfefferkorn by 0.01 of a second. Scott finished second to Pfefferkorn in the 100 hurdles.

Scott then placed second at the Goshen Regional in the 300 hurdles with a time of :46.5 to advance to state. John Glenn senior Cecilia Delinski won in :45.28.

Scott is seeded 19th at the state meet in the 300 hurdles with her regional time. Cathedral junior Reese Sanders is seeded first at :43.91.

Scott said she surprised herself when she placed second at the regional.

She credited Cass coach Sam Carlton for her quick ascension in the hurdles.

She also credited the University of Indianapolis bound Pfefferkorn for pushing her this postseason.

“I don’t think I would have been able to get the time I did,” Scott said. “She was right next to me. She’s a very nice girl.”

Scott advanced to the semistate in cross country this past season by cutting three minutes off her time from her freshman year, which has helped her in the 300 hurdles.

“I think endurance is a huge part of how I’m able to finish the race,” she said.

Scott is hoping to PR and reach the state podium on Saturday.