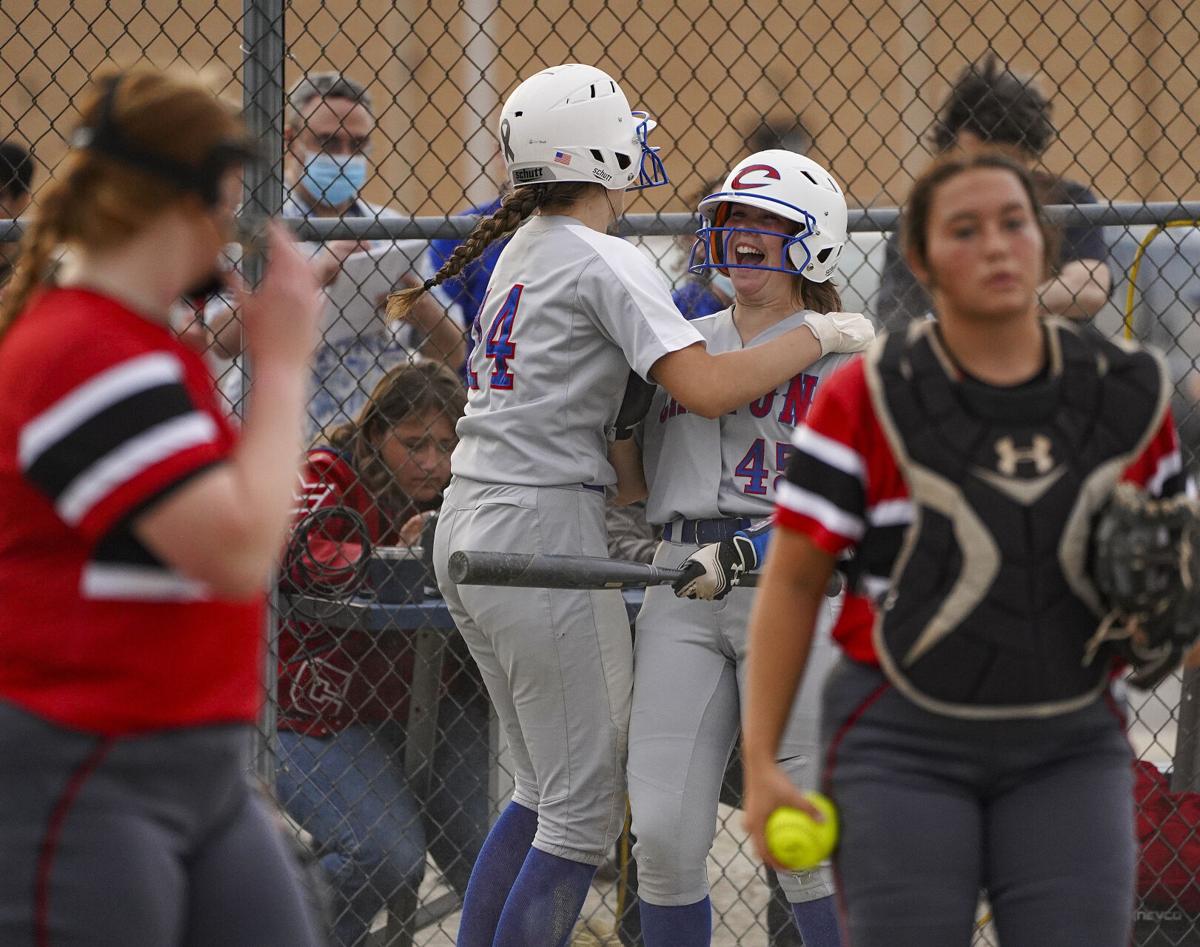 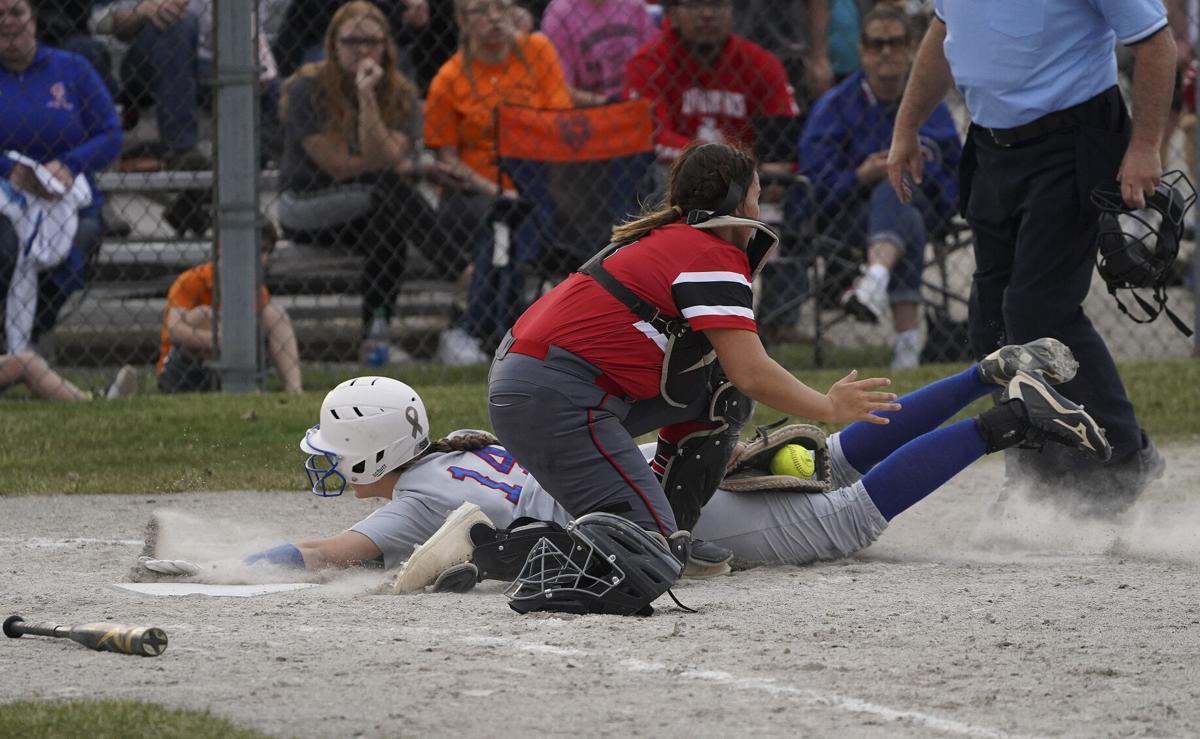 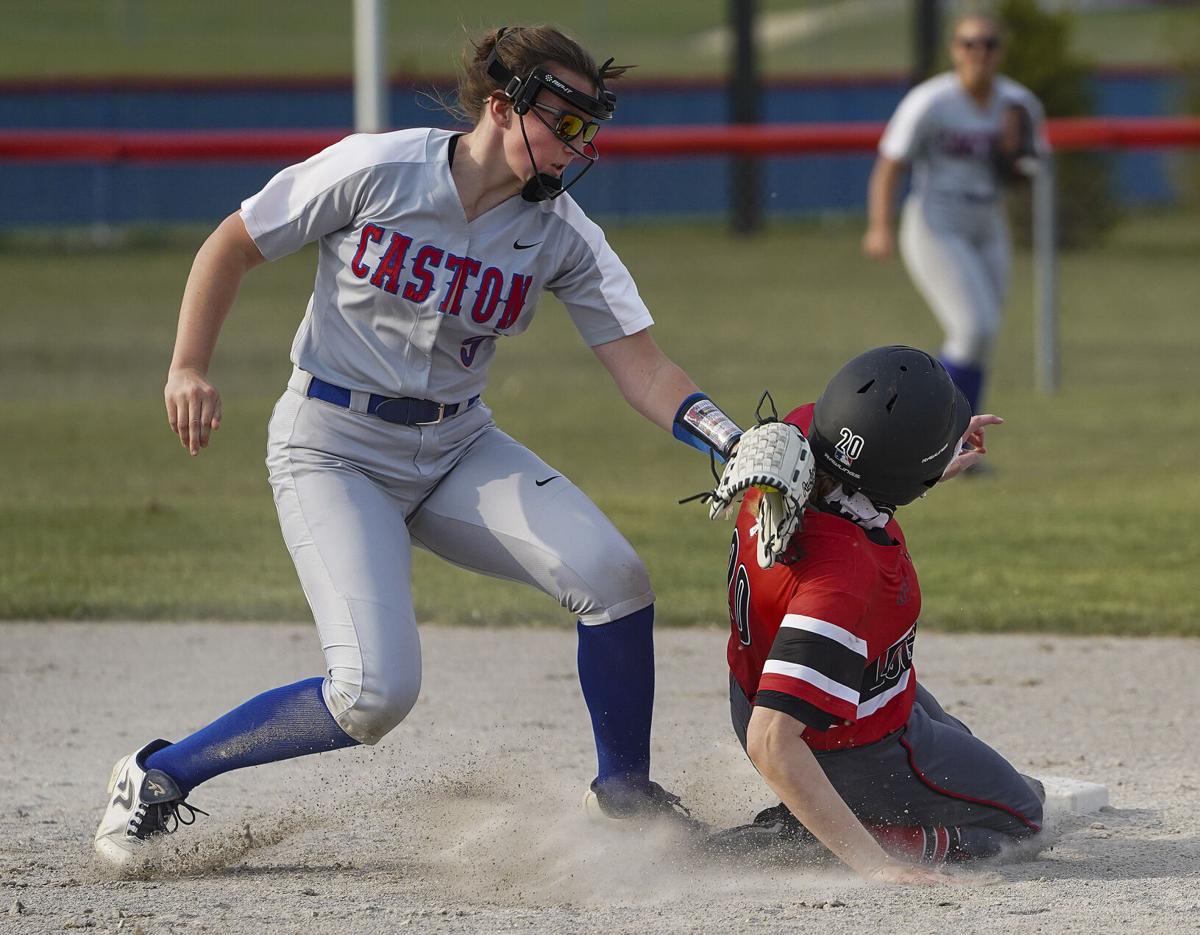 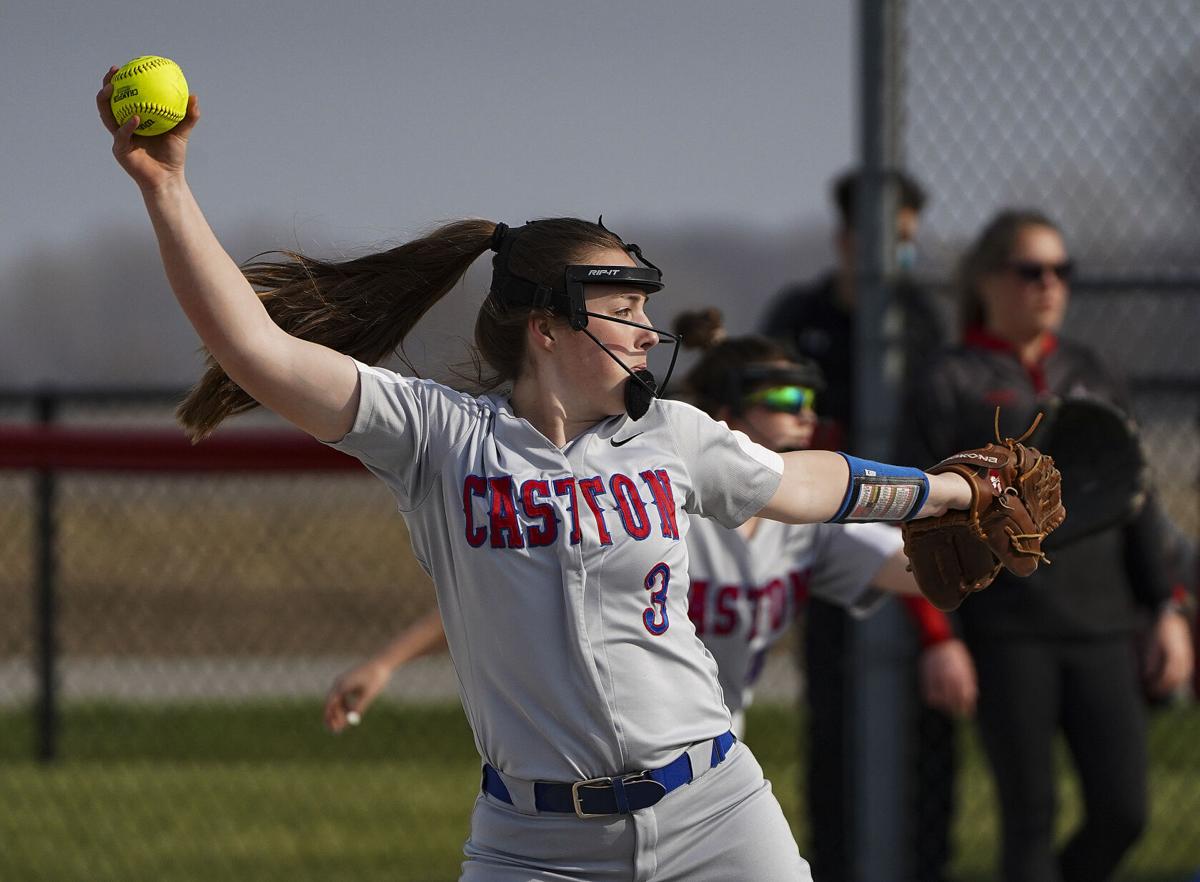 Caston Comets pitcher Kinzie Mollenkopf (3) throws a pitch during the first inning of a game between the Logansport Berries and Caston Comets on Monday, April 5, 2021 in Fulton. 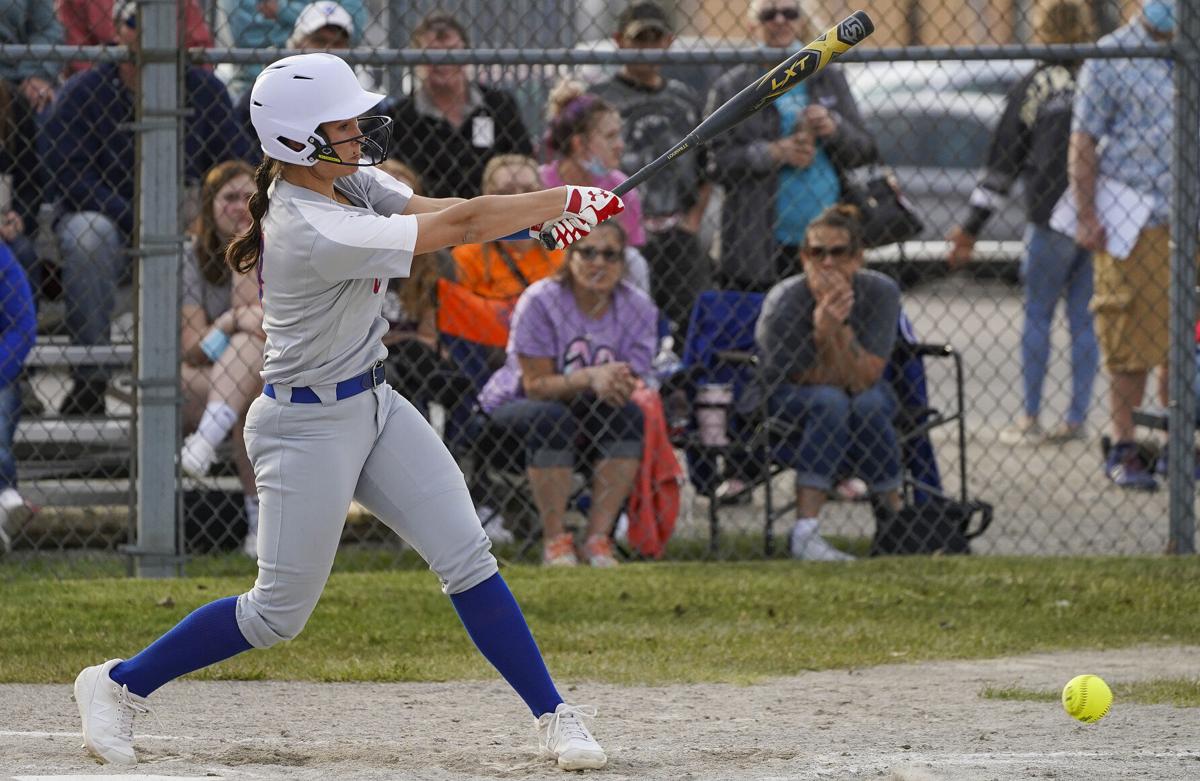 Caston Comets catcher Isabel Scales (10) hits the ball during the third inning of a game between the Logansport Berries and Caston Comets on Monday, April 5, 2021 in Fulton. 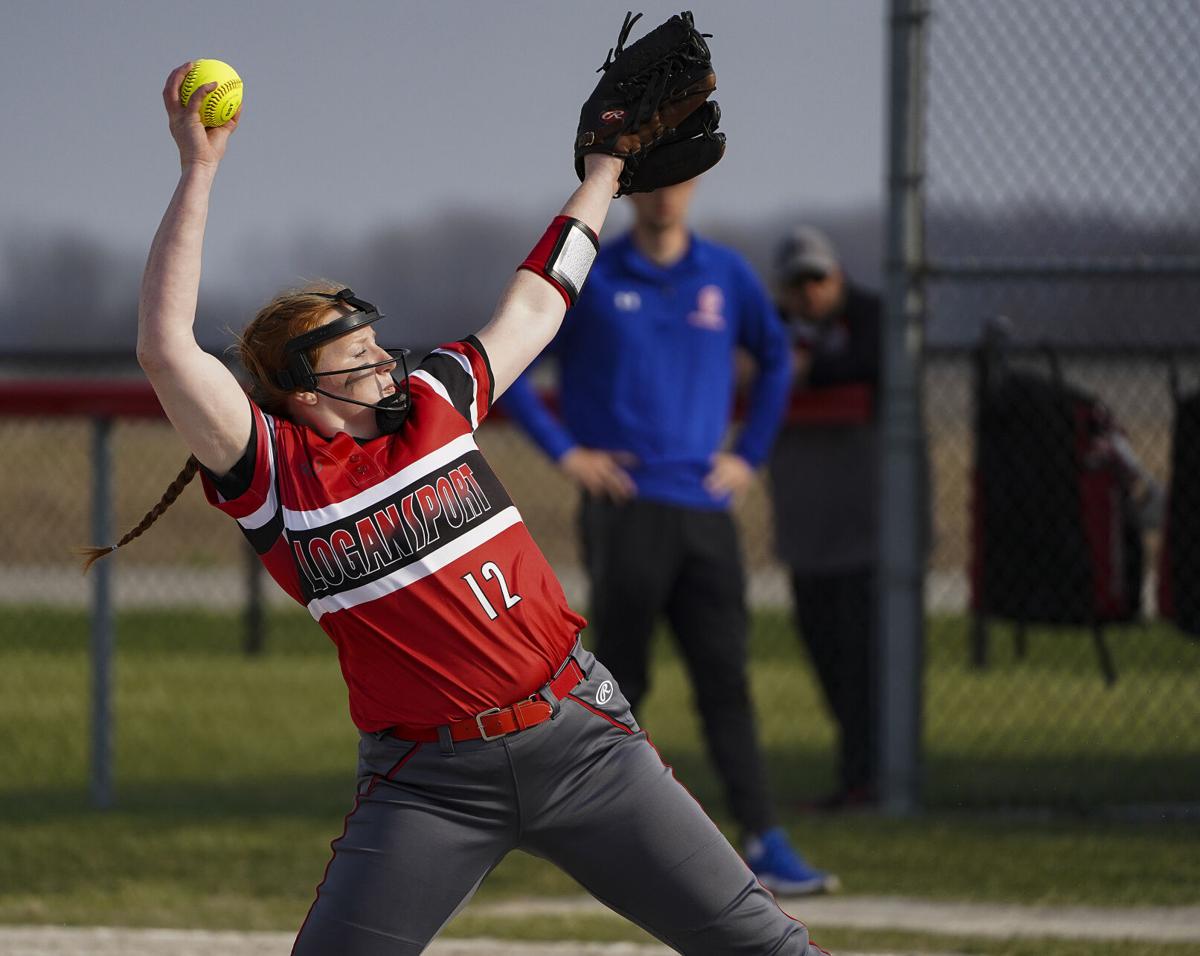 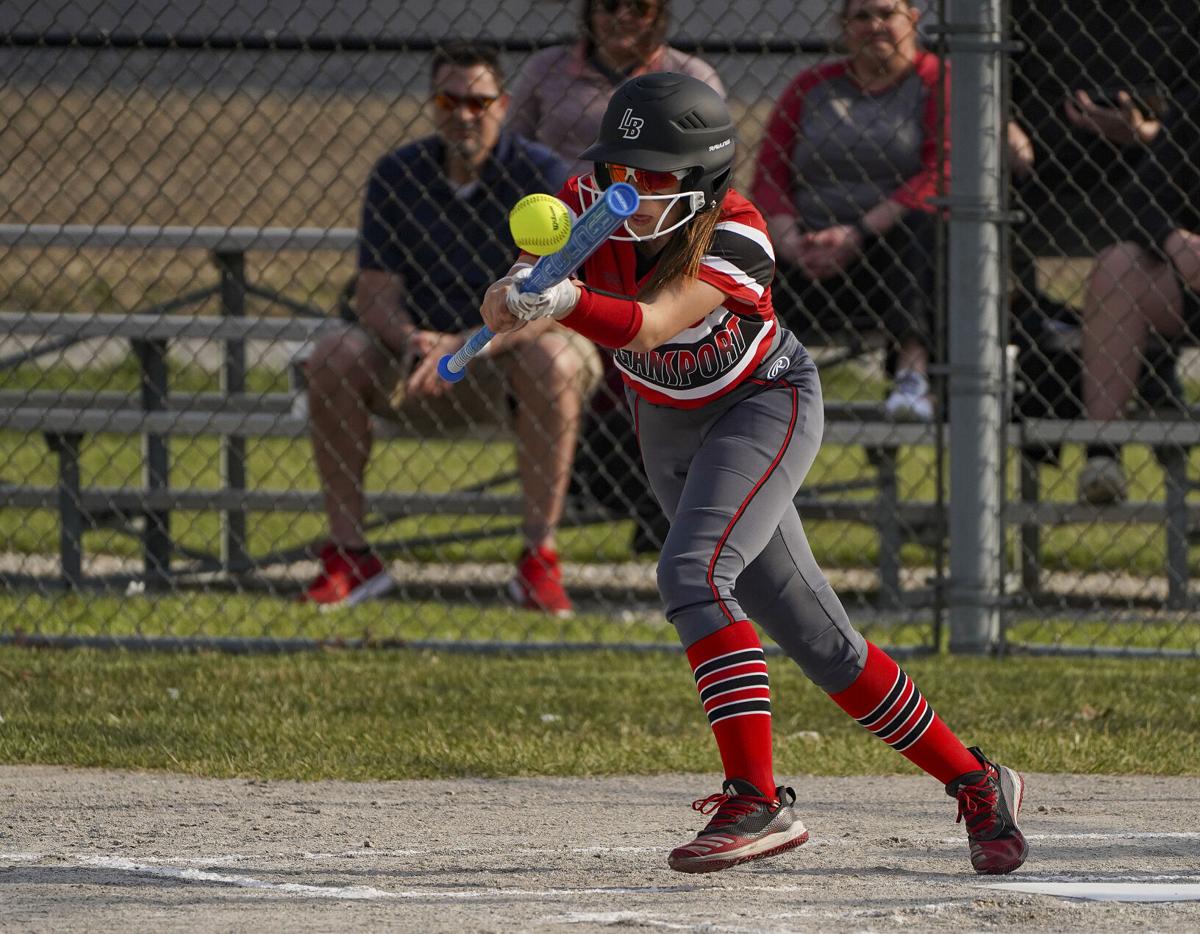 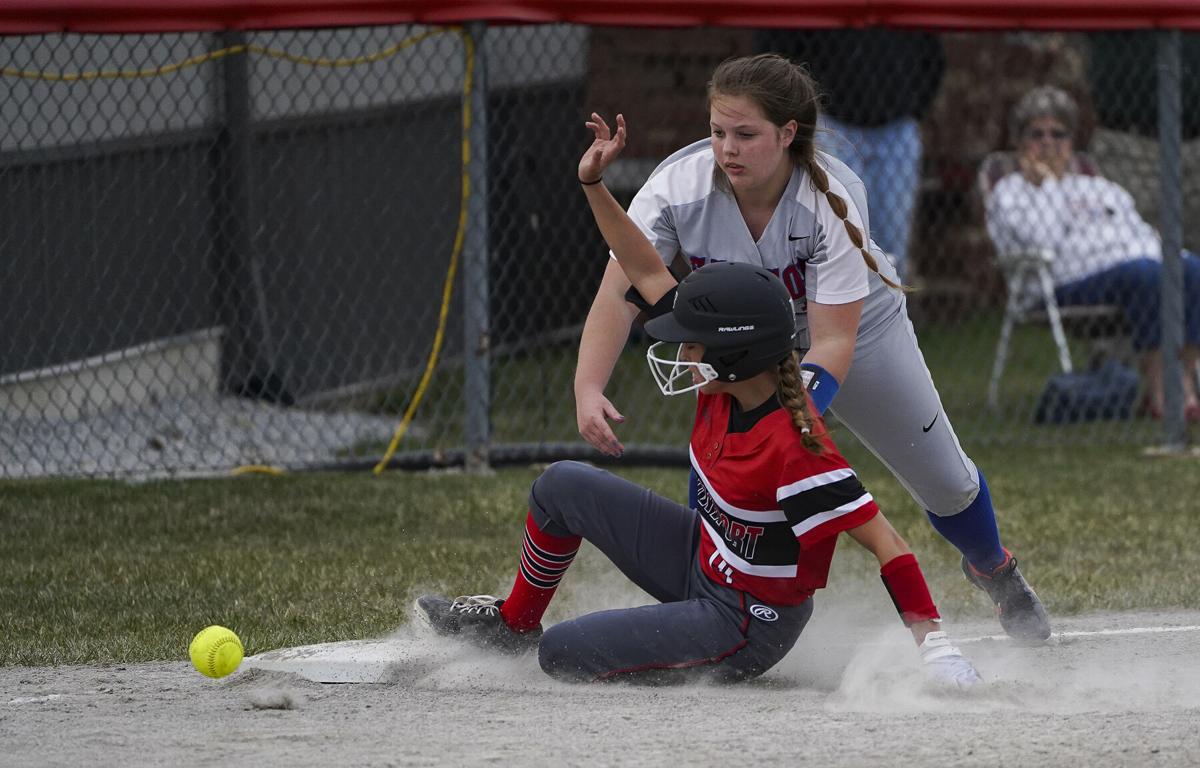 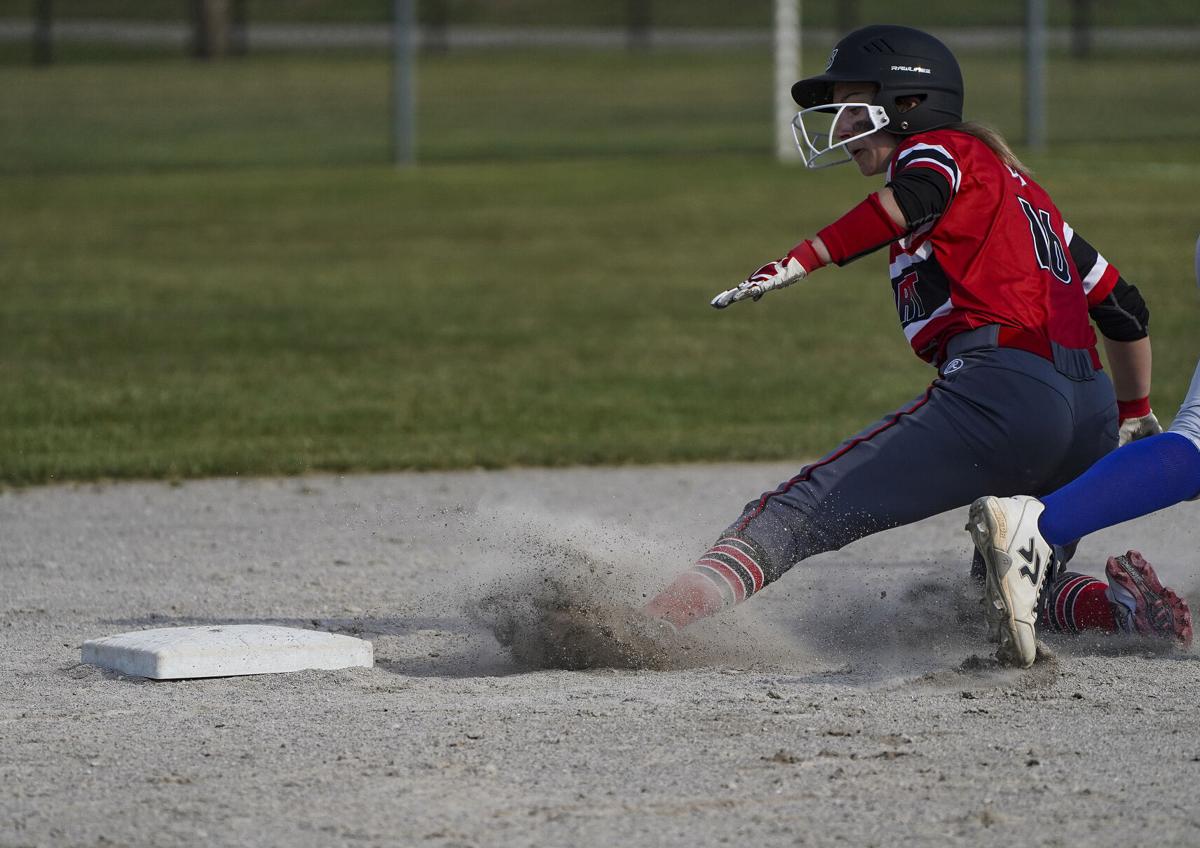 Caston Comets pitcher Kinzie Mollenkopf (3) throws a pitch during the first inning of a game between the Logansport Berries and Caston Comets on Monday, April 5, 2021 in Fulton.

Caston Comets catcher Isabel Scales (10) hits the ball during the third inning of a game between the Logansport Berries and Caston Comets on Monday, April 5, 2021 in Fulton.

Two talented softball teams from Caston and Logansport met in an early season game on Monday in Fulton.

It turned out to be a great game that featured a seventh-inning rally by both teams. The Berries scored two runs in the top of the seventh to take a 4-3 lead. But the Comets answered with two runs in the bottom of the frame for a walkoff 5-4 victory.

“It was just a good win. They battled the whole game,” Caston coach Jon Burks said. “Kinzie [Mollenkopf] did a wonderful job on the mound. I have to shore up some defensive positions, but all in all, they just persevered and got through it. They didn’t let those two runs in the top of the seventh deter them by no means. They came to play bottom line and until that final out is made, you just don’t know what’s going to happen and it showed tonight. So I’m very proud of the girls tonight.”

The Berries (0-1) were down to their last out in the top of the seventh when Abby Henderson was hit by a pitch to put the tying run on first. Addison Guire followed with a single to put runners on the corners, and Guire later took second to put the go-ahead run in scoring position. Chloe Kelly then ripped a two-run single to left to give the Berries a 4-3 lead. Comet left fielder Layne Oliver made a nice juggling catch on a foul pop off the bat of Katey Hall for the third out.

Macee Hinderlider reached on an error to lead off the seventh for the Comets (2-0). Smith followed with a double down the third base line to put runners on second and third. Mollenkopf hit a bloop shot to right that second baseman Pailei Cripe made a nice catch on, but Hinderlider tagged and scored the tying run and Smith moved up to third. The Berries intentionally walked Addison Zimpleman, who was 2-for-3 on the night and 6-for-7 on the season. Isabel Scales followed with a grounder to third. The Berries threw on to first to get the second out. But Smith darted home after the throw and slid under the tag for the game-winning run.

“Macee getting on was a big key because I knew if she got on we were going to make some noise because we had the top of the order up,” Burks said. “I had a hit-and-run on there when Maddi made the hit there and got them all the way around to third and set us up in the perfect position. We had Kinsey and Addison coming up, where can you go any wrong with Bella following and Annie [Harsh]. So good things were going to happen.

“To face a team with that type of caliber ballplayers, they have some good travel girls on that team too, and to be able to battle with them and come out on top... I knew we matched up well as far as our starting lineups and we got our hits when we needed to is the bottom line.”

The Berries came out swinging to start the game. Justyce Rohrabaugh and Cripe had back-to-back singles, followed by an RBI double by Henderson for the first three batters. Kelly added an RBI single to make it 2-0.

The Comets answered with three runs in the third. Hinderlider reached on a walk. Smith’s sac bunt was thrown into right field for an error that allowed a run to score. Mollenkopf had an RBI single and later scored on a groundout by Scales.

Mollenkopf went the distance on the mound, allowing four runs on 10 hits and a hit batsman, striking out six.

Claire Kitchel went the distance for the Berries. She allowed five runs (two earned) on six hits, two walks and a hit batsman, striking out 10.

Kelly had two hits and three RBIs. Ashlyn Berkshire had a double and single. Kitchel had a double. Kendra Sutton added a single.

The loss spoiled the debut for Logan coach Cory Cripe. He is expecting his team to score a lot of runs this year and pointed to the fact that they stranded seven runners the first three innings for the main reason of the loss.

“It’s our first time out this year, so they’ve already played one game, they’ve got a couple of pretty good hitters. We made some mistakes, they’re good hitters,” he said. “Honestly, we should have put up 12 runs in those first three innings. We just couldn’t get a big hit with runners on base and we didn’t do a very good job of shortening up with two strikes. So that’s kind of to be expected right now. There’s some things we need to work on and we kind of knew that, but you’ve just got to see it live first so you can make those adjustments and you get the kids to understand they’ve got to make those adjustments.

“Those last three outs are always the toughest to get in any ballgame. And we came up and they executed and we didn’t execute early in the game.”