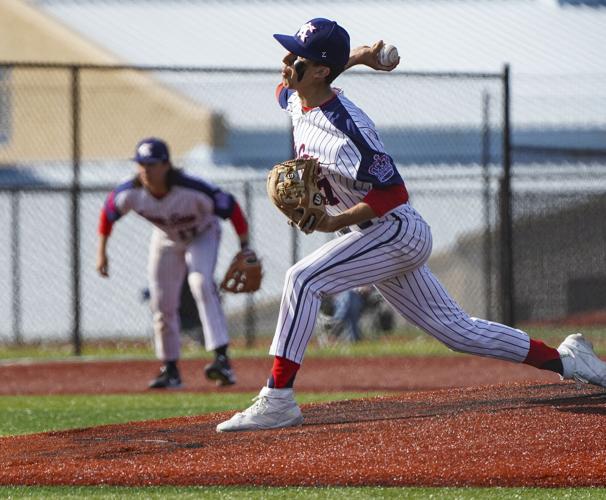 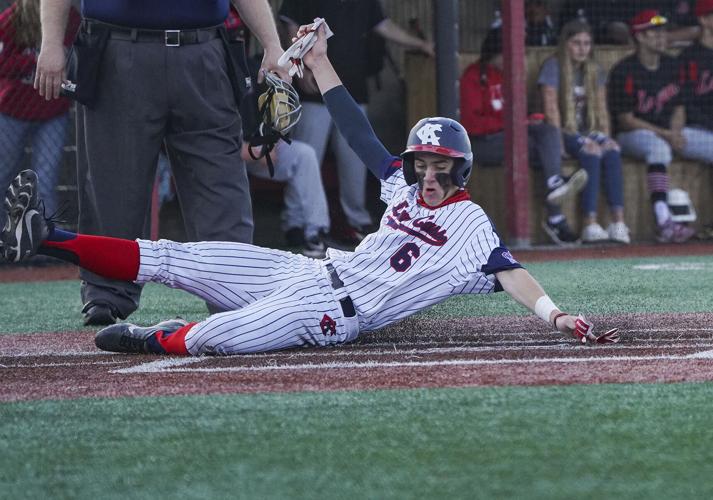 Lewis Cass Kings’ Tyson Good (6) slides into home to score a run during the third inning of a game between the Logansport Berries and Lewis Cass Kings on Thursday, May 13, 2021 in Logansport. 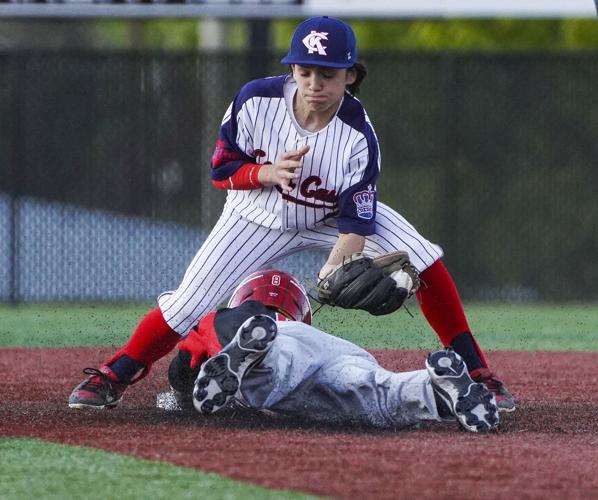 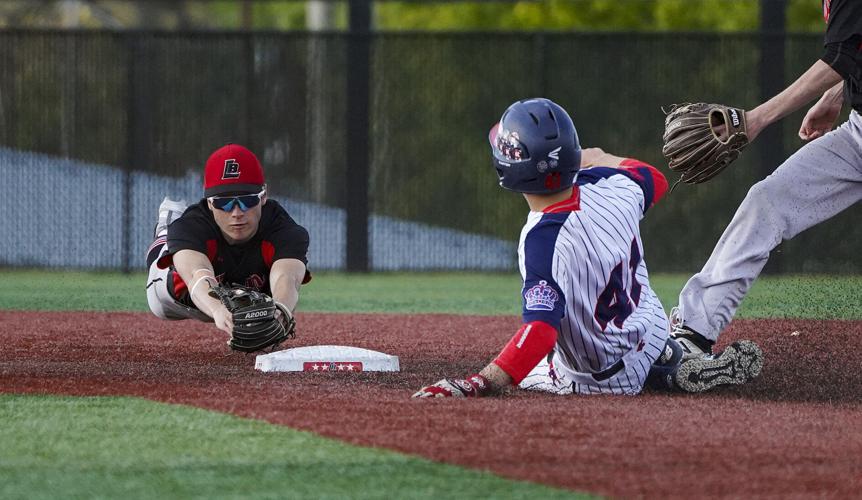 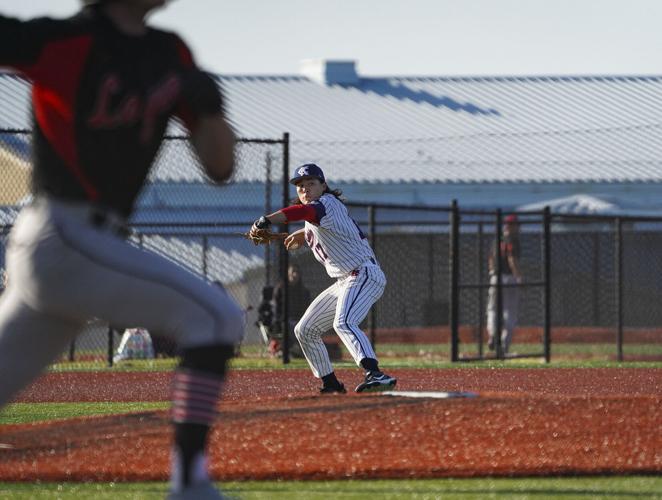 Lewis Cass Kings' Adam Bandelier (17) throws to first base after fielding a ground ball during the sixth inning of a game between the Logansport Berries and Lewis Cass Kings on Thursday, May 13, 2021 in Logansport. 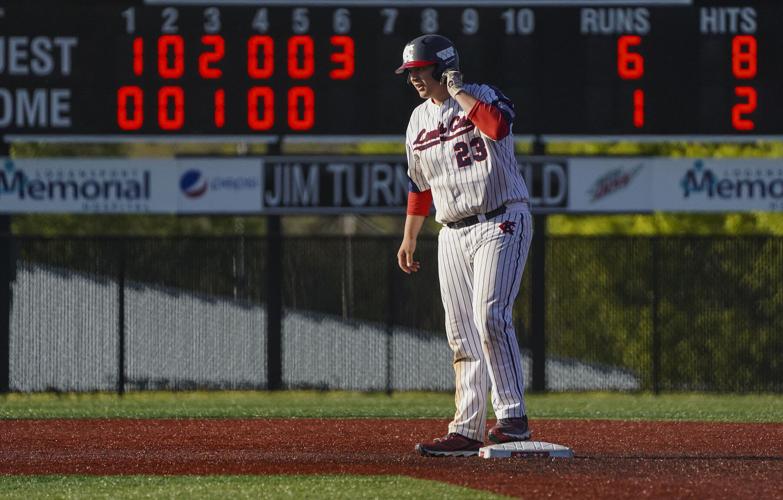 Lewis Cass Kings' Nathaniel Moss (23) stands at second base after hits an RBI double in the sixth inning of a game between the Logansport Berries and Lewis Cass Kings on Thursday, May 13, 2021 in Logansport. 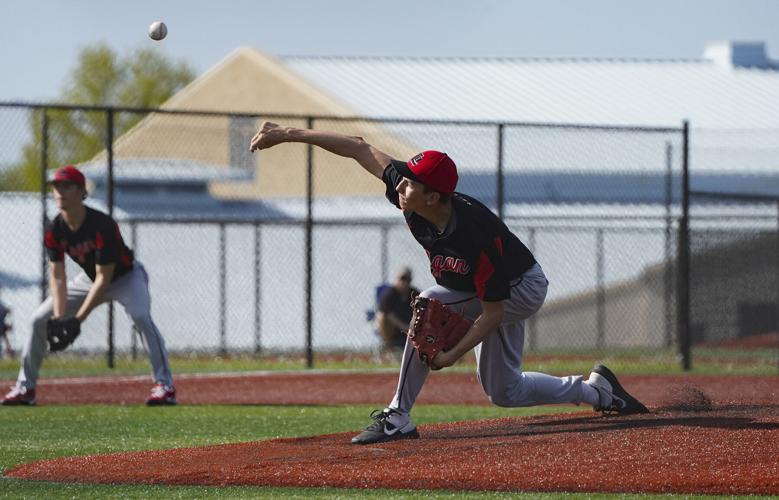 Lewis Cass Kings’ Tyson Good (6) slides into home to score a run during the third inning of a game between the Logansport Berries and Lewis Cass Kings on Thursday, May 13, 2021 in Logansport.

Lewis Cass Kings' Adam Bandelier (17) throws to first base after fielding a ground ball during the sixth inning of a game between the Logansport Berries and Lewis Cass Kings on Thursday, May 13, 2021 in Logansport.

Lewis Cass Kings' Nathaniel Moss (23) stands at second base after hits an RBI double in the sixth inning of a game between the Logansport Berries and Lewis Cass Kings on Thursday, May 13, 2021 in Logansport.

In what might be one of the biggest upsets in the state this season, the Lewis Cass baseball team knocked off Logansport 7-5 on Thursday at Jim Turner Field.

The Kings (6-9) recorded just their sixth win of the season against a Berries team (17-7) that entered having won 12 of their last 13 games.

But part of the beauty of baseball is anything can happen on a given night. The Kings, who were robbed of a prime opportunity of winning a state championship last year by the COVID-19 pandemic, had their only returning starter from that group on the mound Thursday, David Woolever. The senior right-hander brought his A game and shut down the high-octane Berries attack.

Woolever (3-1) allowed just one run on three hits through the first six innings as the Kings built a 7-1 lead. He tired in the seventh and allowed a single and walk before being lifted. Tyson Good and Adam Bandelier combined to get the final three outs as the Kings held on for the 7-5 win.

“Next door neighbors, it’s always fun to play Logansport,” Woolever said. “They’re a much bigger school than us but we had nothing to lose when we came out here. As a team we really wanted this one bad. It’s always a rivalry. But we came out, did what we needed to do and came out with a win.”

Woolever was a big reason why. He finished with a line of three runs (two earned) on four hits, three walks and a hit batsmen, striking out six in six-plus innings.

He baffled the Berries much of the night with breaking pitches.

“We knew coming into this game that Logansport is a good fastball hitting team,” he said. “Our game plan was offspeed, so a lot of curveballs, a lot of sliders, a lot of changeups and it was working really well.”

The Kings jumped out to a 1-0 lead in the first inning. Bandelier and Woolever led off the game with back-to-back base hits. Nathaniel Moss drove in Bandelier with a one-out sacrifice fly.

The Kings plated two more runs in the third. Woolever and Good led off with back-to-back hits, and Moss drew a walk to load the bases. Trenton Fuller drove in a pair of runs with a two-run single to left to give the Kings a 3-0 lead. Moss was out at third on the play. Logansport pitcher Caleb Crook got a groundout and strikeout to avert further damage.

The Berries got a run back in the third when Calryan Parmeter singled, stole second, moved to third on a wild pitch and scored on a sac fly by Gavin Smith. The run would not have occurred if not for a dropped third strike that allowed Kian Harris to reach base prior to the Smith sac fly.

But a dropped third strike cost the Berries dearly in the sixth, which allowed four additional runs to score. Wyatt Orpurt, Bandelier and Woolever drew walks against reliever Brennan Goforth. With two outs, Good reached on a dropped third strike to allow a run to score. Moss followed with a two-run double on a line drive down the left field line to give the Kings a 6-1 lead. A balk allowed another run to score.

The Berries loaded the bases in the bottom of the sixth. Smith singled with one out. Grayson Long was hit by a pitch and Jeremiah Miller drew a walk with two outs. But Woolever got Tristan Kitchel to ground out to first to end the threat.

The Berries put together another inning in the seventh. Goforth singled and Kaiden Lucero drew a walk to chase Woolever. Good entered and got Parmeter to ground out to first on a close play. A wild pitch allowed a run to score to make it 7-2. Jon Maloy drew a walk and Smith followed with an RBI single. Another wild pitch made it 7-4. Ethan Denny was hit by a pitch and Bandelier was brought in to pitch. Bandelier got Long to slowly ground back to the pitcher for the second out and another run scored. Jeremiah Miller was then hit by a pitch to put the tying run on first. But Bandelier got Kitchel to fly out to left to end the game.

Moss, Good and Woolever finished with two hits each for the Kings. Keigan Albright added a hit.

Smith went 3-for-3 with a double, two RBIs and a run scored for the Berries.

Crook allowed three runs (two earned) on seven hits, three walks and a hit batsman, striking out six in five innings. Goforth allowed four runs (none earned) on two hits and three walks. He had the rare stat-line of having seven strikeouts in two innings.

The Kings played one of their best games of the year, coach Greg Marschand said.

“That’s probably the best we’ve hit the ball all year, I thought. David threw strikes,” he said. “It’s always a pleasure to come and play Logansport. Dan Frye does a great job and what a great face for baseball. He played here, played college ball, loves baseball, so it’s an honor just to come and be able to play Logansport. I’m glad our guys stepped up and competed.

“We’ve had some inexperience and have been averaging six errors per game, so it was good to see them play baseball and compete against one of the better teams in the state.”

Marschand was certainly due some good fortune at Jim Turner Field, as he had some powerful teams in the single-class tournament days run into some bad luck against powerful Logansport teams.

“There’s a lot of bad memories here, ways that we found ways to lose the game and we thought we had it,” he said. “But Logansport’s a baseball city, probably the best baseball city in the state of Indiana. It’s a pleasure to be able to play them again.

“It’s good to get the relationship back and play each other. It’s always great competition.”

The Kings will look to build upon the win. With the form they showed Thursday, they can make a run in the Class 2A state tournament.

“We’re very young as a team, not a lot of guys with experience,” Woolever said. “But as the season continues we’ve improved tremendously. With a win like this I think it builds our confidence even more.”

Frye is looking for his team to bounce back this weekend.

“Their pitcher threw the ball well. I’m not sure how many strikeouts we had, weak popups, but we did not swing the bat very well,” he said. “Early in the game we made a couple errors and they got ahead of us. We made a little noise late in the game. Lewis Cass played well, they played well defensively and we had five errors at one point and three hits. We got a little bit of noise late in the game. I hand it to the kids, they didn’t give up. We battled there down six, we had the tying run on base and it’s just a little too late. We’re going to get back to work at it tomorrow. It was senior day for us. They’re going to enjoy themselves out here and have some cake and we’ll get ready tomorrow for Lafayette Jeff on Saturday morning.”

Logan plays Jeff at 10 a.m. Saturday at McCutcheon in the NCC Tournament. The loser plays for third place at 4 p.m. and the winner plays at 7 for the championship.