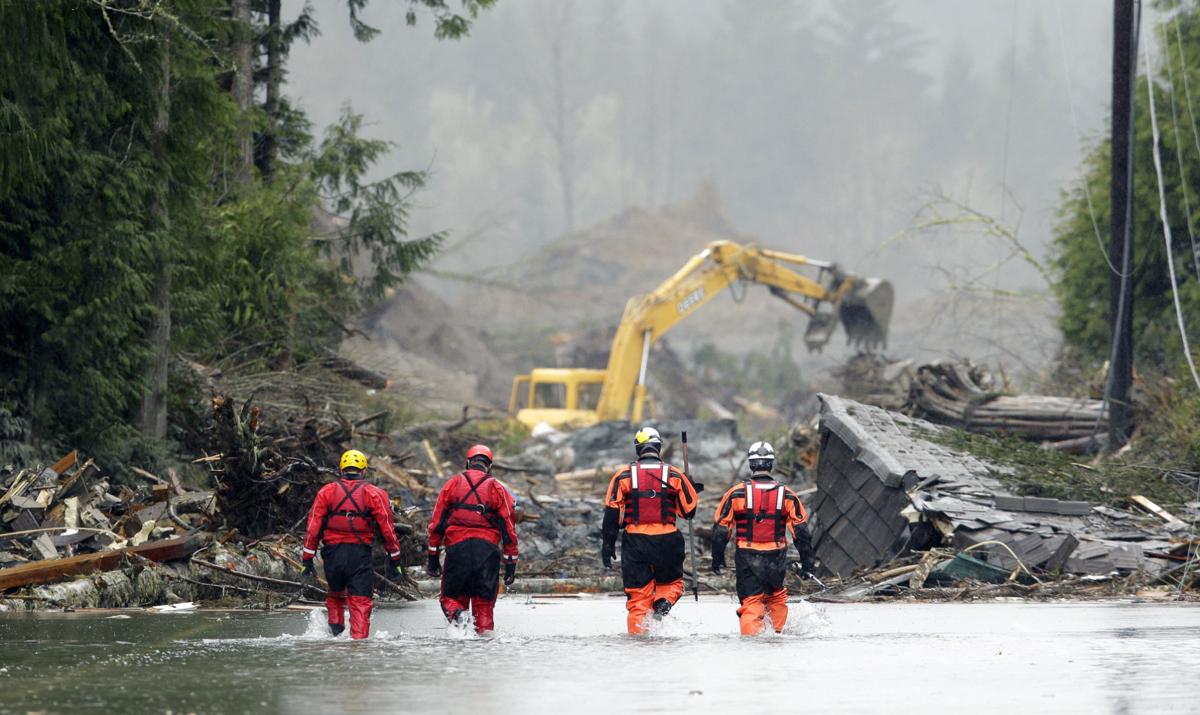 In this March 27, 2014 photo, four search and rescue workers wade through water covering Washington Highway 530 on the eastern edge of the massive mudslide that struck Oso, Wash. on March 22, 2014, killing 43 people. A year later, although the highway has been rebuilt, reminders of the loss are every where. (AP Photo/Ted S. Warren, Pool) 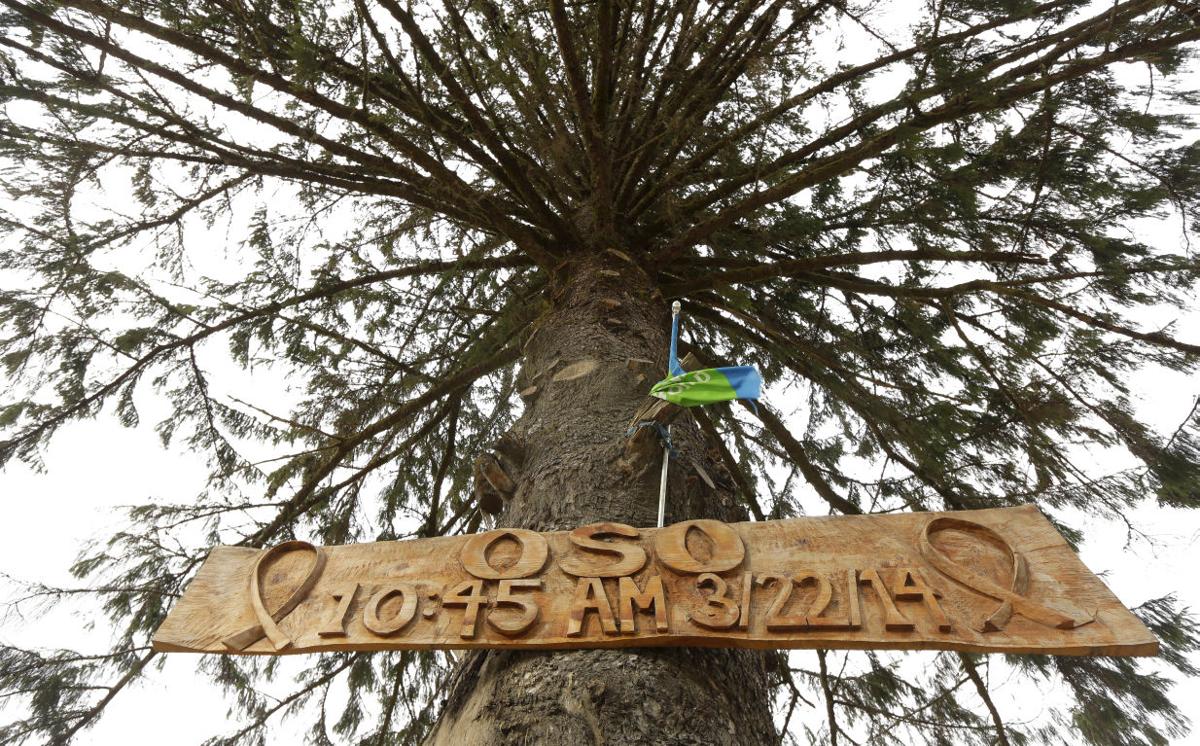 A roadside sign is shown Tuesday, March 17, 2015 that marks the observance of the date of the deadly Washington state mudslide that killed 43 people in the community of Oso, Wash.(AP Photo/Ted S. Warren)

In this March 27, 2014 photo, four search and rescue workers wade through water covering Washington Highway 530 on the eastern edge of the massive mudslide that struck Oso, Wash. on March 22, 2014, killing 43 people. A year later, although the highway has been rebuilt, reminders of the loss are every where. (AP Photo/Ted S. Warren, Pool)

A roadside sign is shown Tuesday, March 17, 2015 that marks the observance of the date of the deadly Washington state mudslide that killed 43 people in the community of Oso, Wash.(AP Photo/Ted S. Warren)

DARRINGTON, Wash. (AP) — The new sign for Steelhead Drive is fresh green with white lettering. But the road it announces is a mere stub of pavement, ending in a massive gray-and-brown scab of mud, clay and broken timber where a rural Washington state neighborhood once sat.

A rain-soaked hillside collapsed suddenly on March 22, 2014, sending 18 million tons of sand and soil thundering across a river valley north of Seattle, destroying dozens of homes and entombing 43 people in the deadliest landslide in U.S. history.

A year later, as a bill moves through the state legislature to improve mapping of landslide-prone areas and give local planners a better idea of risky development areas, the mangled cars and homes have been cleaned up, but reminders of loss are everywhere.

"Those thoughts and memories are out there every time you head down the valley," said Dan Rankin, the mayor in nearby Darrington.

Yet living with the scarred landscape also reminds them of how they tirelessly searched for victims, of their gratitude for the well-wishes they received and of the millions of dollars in contributions that poured in for housing, counseling and mortgage payments on destroyed properties.

They take solace in hoping studies of the landslide's unusual behavior — of why it was so much more destructive than others in the area — could help prevent similar tragedies.

Jonathan Godt, coordinator for the U.S. Geological Survey's landslide hazard program, said the disaster is significantly enhancing scientists' understanding. "The key research goal is to identify the basic reasons of why the landslide traveled so far and so fast," he said.

Godt said the USGS hopes that over the next eight years it will be able to chart geologic hazards across the country using advanced technology, but the plan is only partially funded.

The state has imposed new rules on logging in landslide-prone areas. Families of some victims have alleged in a lawsuit that logging on the hilltop contributed to the slope's instability.

The Legislature is also addressing measures to clarify emergency response rules, after confusion about whether state firefighting resources could be used for a non-fire emergency delayed their deployment.

The slide struck on a clear Saturday morning after weeks of heavy rains. The neighborhood, near the tiny community of Oso, was a development of about 35 single-family homes, some dating to the 1960s, across the North Fork of the Stillaguamish River from a hillside in the Cascade mountains.

The river eroded the base of the hill, as it had been doing for decades, causing numerous smaller slides. This time, enough sand and soil to cover 600 football fields 10 feet deep gushed down, sweeping the river up with it. A highway was buried under as much as 20 feet of muck.

The damage was so vast that it was difficult to comprehend: First responders had trouble getting close enough to take it all in, especially with the hillside continuing to shed and the blocked river rising.

Dayn Brunner learned of the slide in a worried call from his mother. His sister, Summer Raffo, was driving to a job shoeing horses when it hit.

Brunner and his then 16-year-old son, Riley, talked their way into the disaster zone on the pretense of delivering pizzas to responders. They spent hours slogging through mud, sometimes sinking to their chest, ignoring warnings from sheriff's deputies in a helicopter overhead that they'd be arrested if they didn't evacuate.

They saw bodies. But it took until Day 5, with dozens more searchers helping, to find his sister. She was buried in her car, her hands still gripping the wheel.

Many of the searchers were loggers who knew the victims. They relied on their own chain saws, heavy machinery and expertise. On Wednesday, when the state awarded its Medal of Valor to the local communities for their response, a logger, Quinn Nations, accepted on Darrington's behalf.

Several remembrance events were planned for the weekend, including a moment of silence Sunday morning along the reconstructed highway, where rows of cedar trees have been planted to honor the victims.

Brunner and his son built a glass-paned cabinet to display slide artifacts in the Darrington fire hall — including a piece of the old wooden Steelhead Drive sign they found in the muck.

The year's passage is a landmark, Brunner said — a recognition the community is moving forward, even if the scar on the landscape remains. "It's sort of a healing thing," Brunner said. "But we'll never heal from this. It's too big of a thing."

Young, Scott R., 70, of Rochester. A celebration of life will be at 11 a.m. today at Good Family Funeral Home, 1200 W. 18th St., Rochester. Per Scott’s request, attendees are asked to wear T-shirts or flannel and jeans.

Pickens, Phyllis A., 80, of Logansport. A Mass of Christian Burial will be at 1 p.m. today at All Saints Catholic Church.