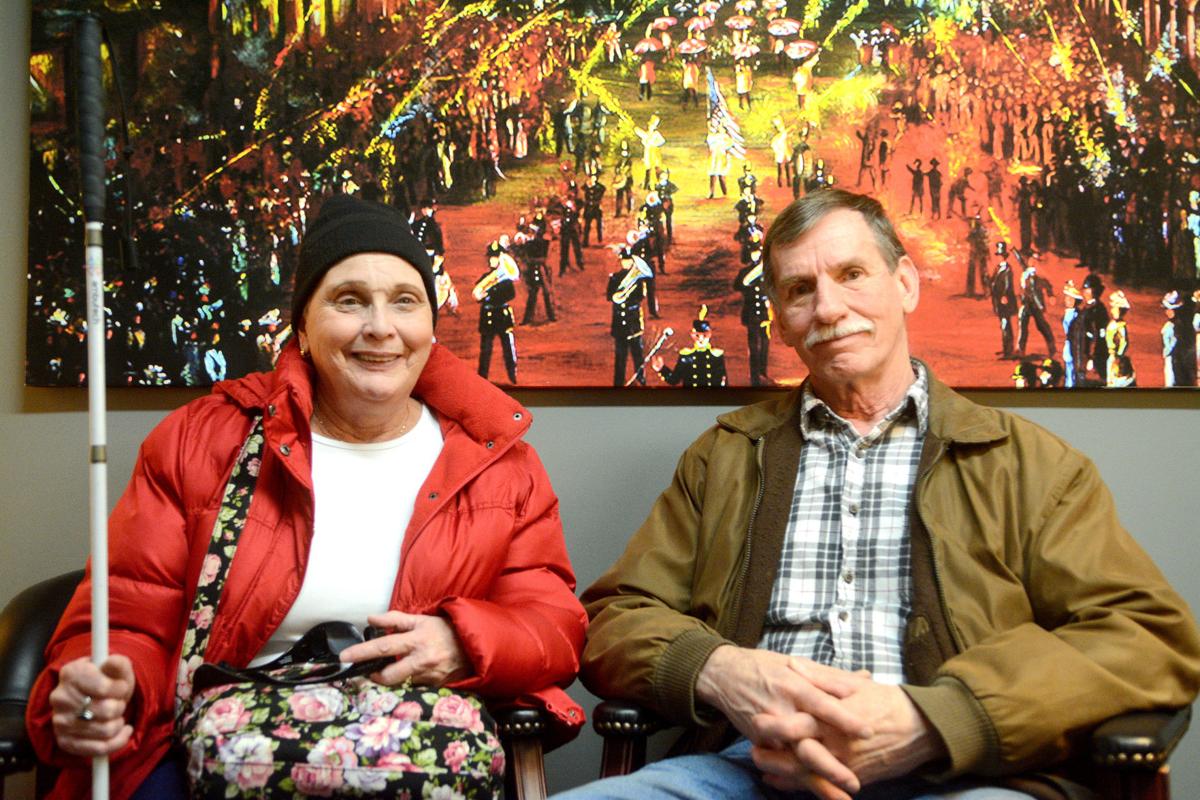 Karen and Tim Bohling discuss the program that is helping Karen to be matched with a leader dog as she slowly loses her sight. 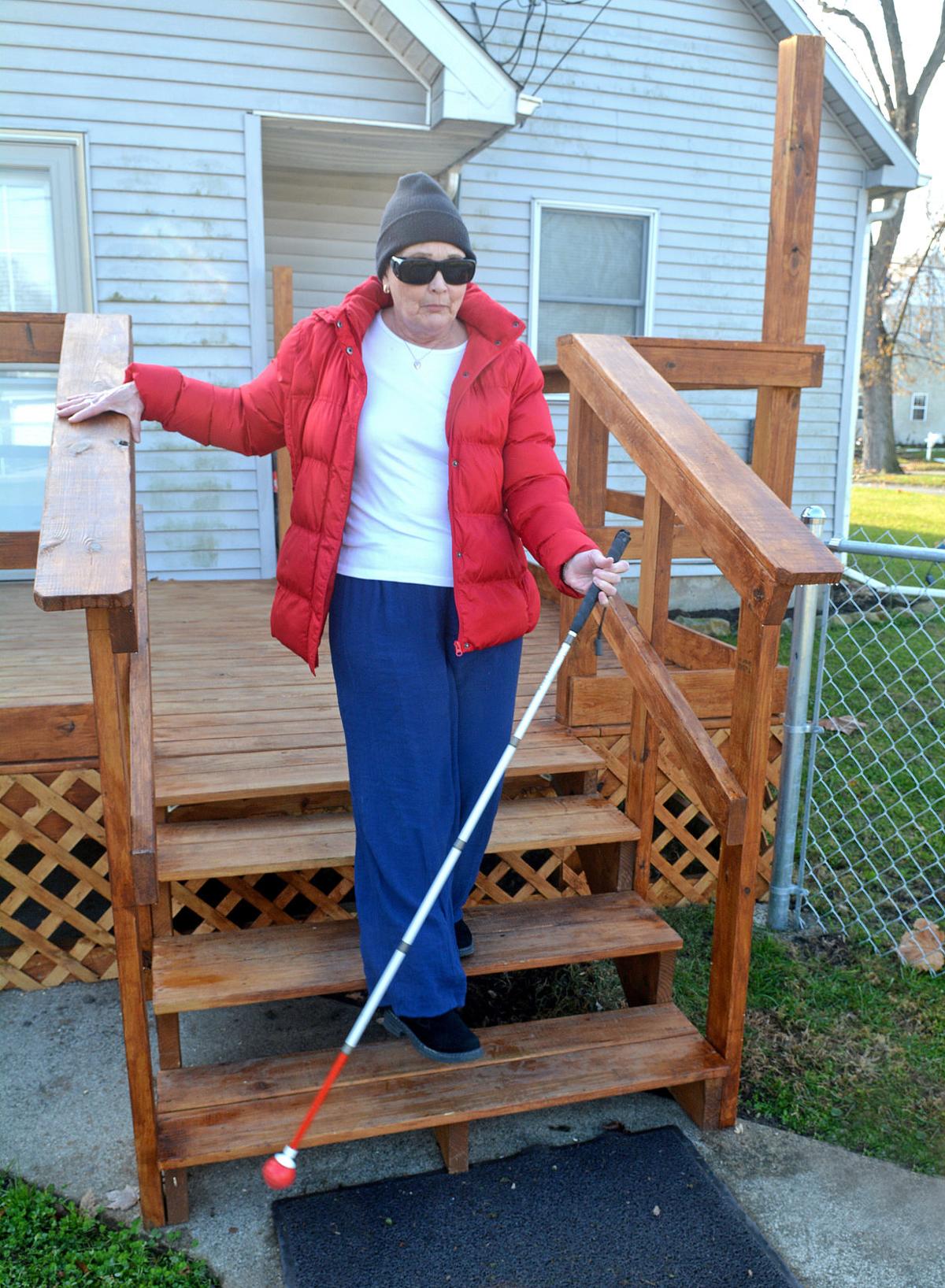 Karen Bohling demonstrates how she uses a cane to navigate the steps on the new deck her son, Tom, helped build to make it easier for her to get in and out of the house. 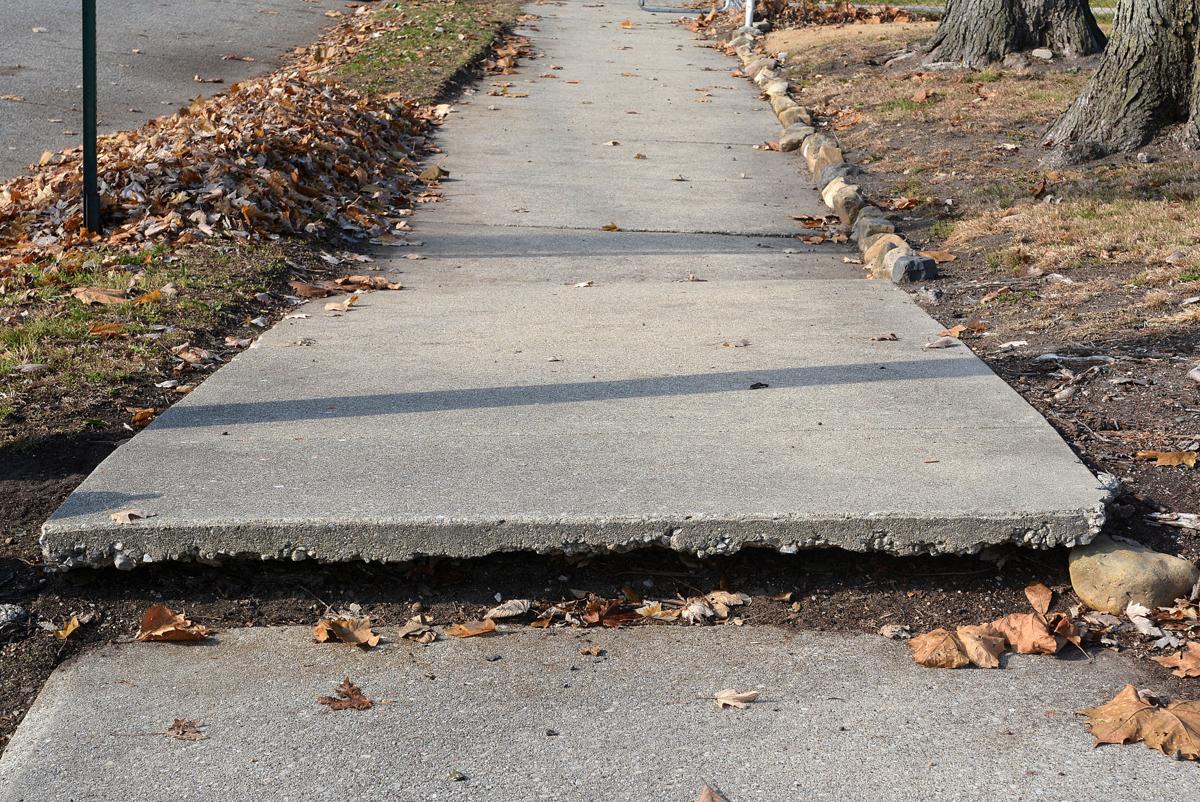 The sidewalk at the end of the Bohling’s driveway is one of many in their neighborhood that are difficult to navigate for those with disabilities.

Karen and Tim Bohling discuss the program that is helping Karen to be matched with a leader dog as she slowly loses her sight.

Karen Bohling demonstrates how she uses a cane to navigate the steps on the new deck her son, Tom, helped build to make it easier for her to get in and out of the house.

The sidewalk at the end of the Bohling’s driveway is one of many in their neighborhood that are difficult to navigate for those with disabilities.

Karen Bohling started out life in intensive care, having been born three months premature. Because her lungs were not fully developed in the womb, she was treated with oxygen therapy.

Doctors now know that such treatments can cause retrolental fibroplasia — an eye disease that can cause blindness. So by the time she was in her early 30s, she lost one eye.

“My folks didn’t realize anything was wrong,” Bohling said. “They thought I had a lazy eye. Later, I was working in a nursing home when my retina ripped and, at that time, the eye doctor that I went to told me I shouldn’t be in pain and there was no need to worry about it. I was blind a week later. He did surgery and I ended up losing the eye.”

Now 68, macular degeneration is slowly taking what vision she has in her remaining eye.

The adjustment to daily life has been difficult and stressful, but she found out about a program that is building her self confidence and self reliance — and hopefully finding her a leader dog — all without having to pay a penny.

Lions Clubs International, a humanitarian organization, founded Leader Dogs for the Blind in 1939, and Lions have been dedicated ambassadors and loyal supporters of the mission ever since. Over 4,900 Lions Clubs contribute financially to the program, which identifies people who could benefit from a leader dog’s services and helps them go through the process of being matched with an appropriate animal.

Not all those who enter the program will end up getting a leader dog. Gail Robbins is a member of the Lions Club and a trustee of the Leader Dog project. Her and her husband, Tom, district governor for the Lions Club’s District 25C which oversees 56 Lions Clubs serving west-central Indiana, have been part of bringing people together with the dogs that transform their lives for years.

“Basically, the local Lions Club is notified that there is a potential leader dog owner in their area and they call in a trustee to help get the paperwork going, film the person going up and down stairs and navigating intersections and document their mobility,” Gail said. “The dog would be reinforcing the person’s mobile abilities, so it’s important to match the dog to the person. In some cases, it just isn’t possible to make that match.”

The Robbins have only met Karen and her husband, Tim, once in person — but the experience was immediately profound for both couples.

“She just kind of sparked something in us,” Gail said. “We try not to get too attached to the people we meet through this program because we may end up having to give them the bad news that they won’t be getting a dog. But we cannot wait for Karen to get her dog ... she has the spirit, the attitude and the motivation to make this happen.”

Karen felt the same spark. “The Robbins are such sweet people,” she said. “They helped us so much to figure out the process, and they’re the ones who told us all about what the leader dog program could offer.”

Karen had first reached out to Marvin Cripe, a longtime friend who was a member of the local Lions Club before it disbanded in 2011.

“Karen was trying to find some way to get a phone that would tell her [audibly] who was calling,” Cripe said. “I made a few calls and got her in touch with some folks.”

In 2016, a new Lions chapter was founded in Logansport, helped along greatly by Charlie Short, a member of a West Lafayette club who helped the new chapter get restarted.

“There have been three Lions Club chapters in Logansport,” Short explained. “The first was started in the 1920s and didn’t survive through the Great Depression. The second one lasted from 1947 until [2011].” The current Logansport club’s future is uncertain at this time, but clubs are still active in a number of surrounding towns.

He praised the leader dog program as one of the organization’s most important ongoing initiatives. “It’s one of five programs supported by every Lions Club in the state of Indiana.” Others include Cancer Control, Speech and Hearing, the Indiana School for the Blind and the Vision First Eye and Tissue Bank projects.

Karen’s journey toward connecting with a leader dog led her to Rochester Hills, Michigan, just north Detroit. That’s where she was flown — free of charge — for a week of orientation and mobility training (O&M).

“I got to meet so many people like me,” Karen said. “Some were totally blind their whole life. Others were new to it.”

One of the first steps was to begin using a white cane. “It’s not as easy as you might think,” Karen said. “The trainer kept pushing my chin up and saying ‘stop looking at your feet!’”

That’s an important key step in navigating with a cane, since those who are blind have to rely heavily on their hearing and, if they have any, their peripheral vision. “I’m learning to listen to traffic so I know when it’s safe to cross the street. Around here, people aren’t used to seeing blind people that much, so there have been times when people have turned right in front of me. One thing I learned is to stop and turn toward oncoming traffic with my cane straight down in front of me so they can see it before I start moving.”

Karen said the best part of the training sessions — other than it not costing a penny — was the extensive training she received in a short amount of time. In addition to learning to use her cane properly, classes taught her how to utilize a human guide, use orientation skills to keep track of directions, solve problems when confronting crowds or route barriers, cross streets safely, reorient herself after a mistake and handle shopping on her own.

“I walked to CVS [on the west wide] by myself when I got back [about 10 blocks from her house],” Karen recalls. “I couldn’t hear the traffic because they were working on something with heavy equipment. Then I heard a little boy yell ‘Don’t move!’ So I stayed still and pretty soon he says ‘It’s okay, I’ll meet you halfway.’ I told him to have a good day.”

“When I walked in, I didn’t see anybody. So I just stood there and a woman said ‘Can I help you?’ When I told her what I wanted, she went and got everything for me. When she got back, she looked at me and said ‘I think I made a mistake.’ I said, ‘that’s okay, we’re both learning.’ I should have asked her to help me get to where I needed to go.”

Karen bemused, “But now I’m ready to go to the malls. All set for Christmas with all that glass shelving ... Ha! No I’m not, because I could just see myself breaking everything! I get in a hurry and I need to slow down because I’m so used to how things were before all this happened.”

A major deciding factor for Leader Dogs for the Blind is to be sure their dogs are going to homes that are safe places for the dogs to work, play and relax. The Bohling’s spent much of the summer putting up a fence in their back yard for their future dog to have a place to safely play. Her son, Tom, handled most of the construction for a new deck on the back porch that allows Karen and her future dog to safely access the house from the back entrance. “But I helped a little ... I held a couple pieces of wood up while he nailed them in place!” Karen joked.

Sidewalks can also be an issue. The one right at the end of the Bohling’s driveway is pushed up significantly from a old tree’s root system. Several in her west side neighborhood have large cracks and missing sections. “That sidewalk is something we hoped to get to this summer but we ran out of time before the cold set it,” Karen’s husband Tim said.

Karen isn’t one for resting on her laurels. “For me, to sit on the couch and not want to do anything else, knowing there’s other people here in Logansport that need maybe a cane or need some extra help with things just isn’t right,” she said. “And that’s why I’m talking to you, because I want people to understand what the Lions Club can do.”

Gail Robbins said of Karen, “She just has this amazing attitude. She’s always learning and wanting to learn more. She could be an ambassador for this project.”

“God closed one door on me and opened this one,” Karen said. “People need to be aware that there’s a lot of things that people need help with once they’ve started losing their sight.”

“Some folks are left alone, in the darkness, for so many years,” Gail said. “Once they finally qualify for a dog, their whole life, it just changes.”

Lions Clubs International is the world’s largest service club organization with more than 1.4 million members in approximately 46,000 clubs in more than 200 countries and geographical areas around the world. For more information on the organization, visit www.lionsclubs.org