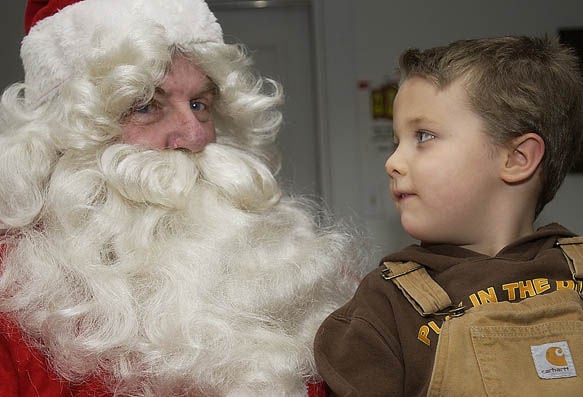 TALKING TO SANTA: Brian Stough, 4, tells Santa what he would like for Christmas during the Walton Small Town Christmas celebration. (Angi Turnpaugh/Pharos-Tribune) 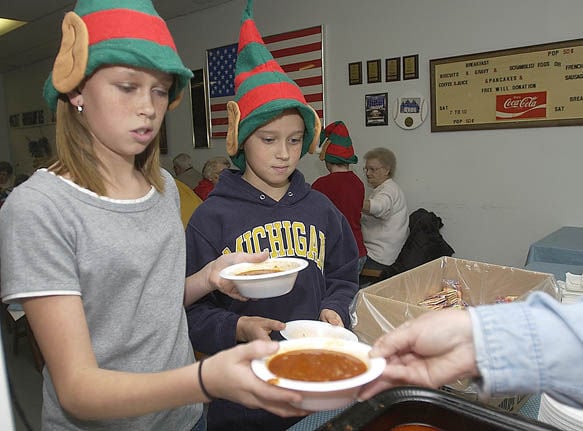 TALKING TO SANTA: Brian Stough, 4, tells Santa what he would like for Christmas during the Walton Small Town Christmas celebration. (Angi Turnpaugh/Pharos-Tribune)

Despite the chilly weather and slippery roads, carloads of people came out to enjoy the 37th Living Nativity in Twelve Mile. Although attendance was down compared to the previous year, the turnout was better than expected, said Christmas pageant committee member Cyrena Staller. While many new volunteers showed up, others such as Betty and George Staller, decided to go behind the scenes for a change. Betty cleaned and fit the costumes this year, while George came prepared to dress in costume if needed. Both said the number of volunteers seemed larger this year. “I think the committee is reaching out more and asking people,” said Betty. Part of the donations raised will help to maintain the pageant, while the rest goes to the Salvation Army. Also this weekend, Walton held its Small Town Christmas. Santa visited children at the Lions Club on Saturday morning. In addition, the Walton Public Library hosted a holiday open house, where Melody Erbaugh Holland conducted a book signing and the Hoosier String performed. At the Masonic Hall, chili, hot dogs and drinks were served free of charge at the Birnell family chili dinner. Donations were accepted. Carolers also came out to sing at the Urban Park for the annual lighting of the trees. In Delphi, an old-fashioned Christmas was held on Saturday and Sunday at Canal Park. People were able to take a trip back into time and see life as it was 150 years ago. Santa visited with children and hot apple dumplings were offered. Wooden toys, old time crafts, demonstrations of copper work and carriage rides were all available. Community members also toured the decorated cabins and buildings in the park. The pageant in Twelve Mile has grown and changed over the years, but one thing remains the same — family traditions. Many in the community have grown up with the pageant. From generation to generation, families have come together to volunteer their time. Fred Skinner, whose parents helped to create the event, volunteers every year. “I think I’ve been in about every scene,” he said. This year Skinner was a merchant in the Bethlehem scene. “I was a merchant for 50 some years,” he said. “I should be able to play the role here.” Others started off even younger and have passed the tradition on to their own children, such as Traci Brown. Brown participated in her first pageant at the age of 3, playing the role of an elf making toys. Brown has taken over a task her mother once performed, setting up the cookies for the volunteers’ half-hour breaks. “This is something I want my kids to remember when they get older,” she said. In addition to her own children, Makenna and Joshua, several of her young cousins also participated. Grace Scott joined the Living Nativity for the first year as Mary. Her husband, Wes, has been involved for at least 15 years and played Joseph this season. For Grace, the event is unique because people of all walks of life gather for two days to put on the long-lived tradition. She also said it helps to remind people of the true meaning of Christmas. “This is smalltown America,” she said. “You aren’t going to find this in L.A.” Denise Forsberg can be reached at (574) 732-5113 via e-mail at denise.forsberg@pharostribune.com