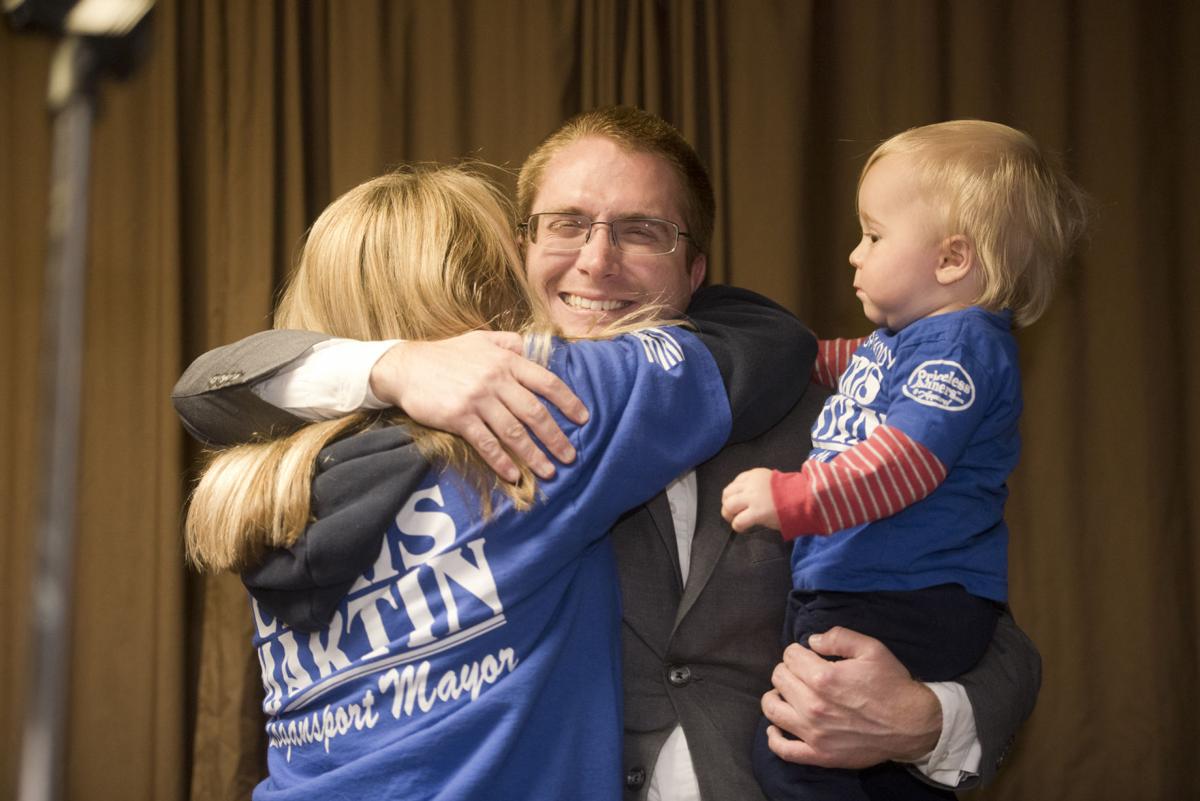 Chris Martin is congratulated by his mother, Flo Hudson, while holding his son, Cyrus. 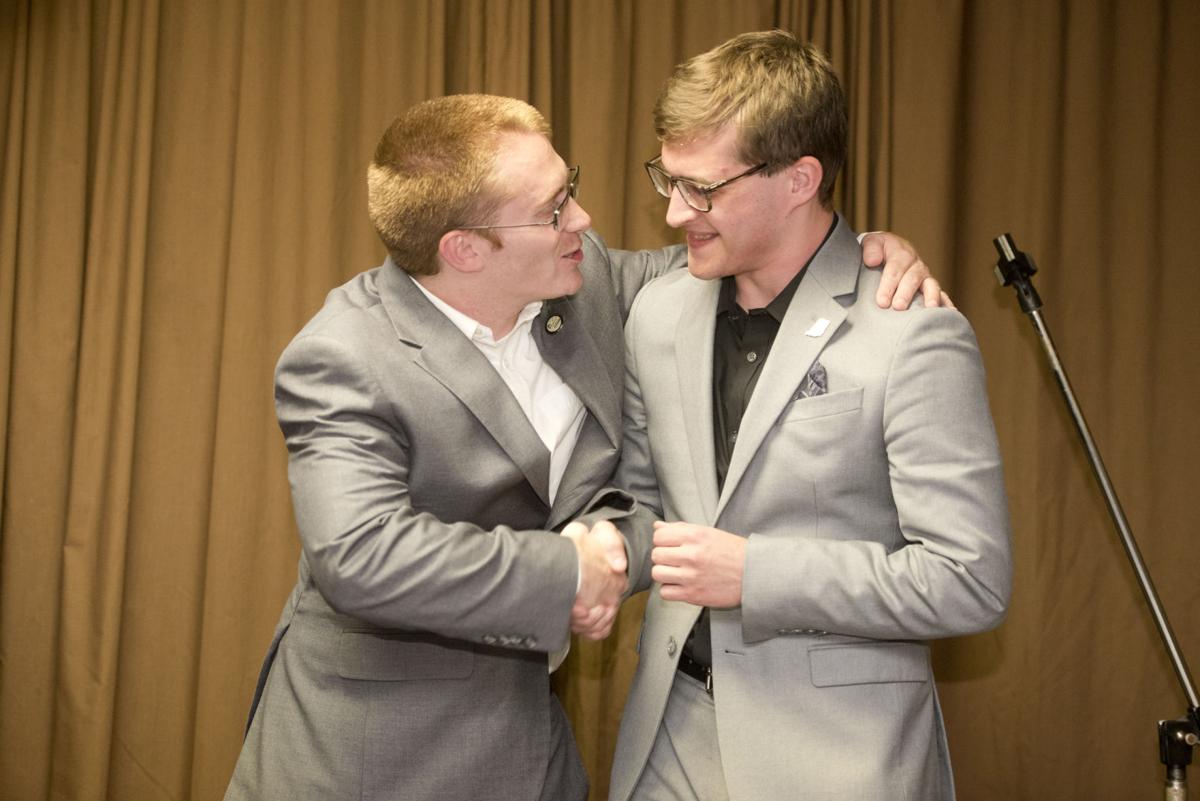 Mayor-elect Chris Martin, left, and Councilman-elect Jonathan Nelms, both Republicans, congratulate each other on their victories. 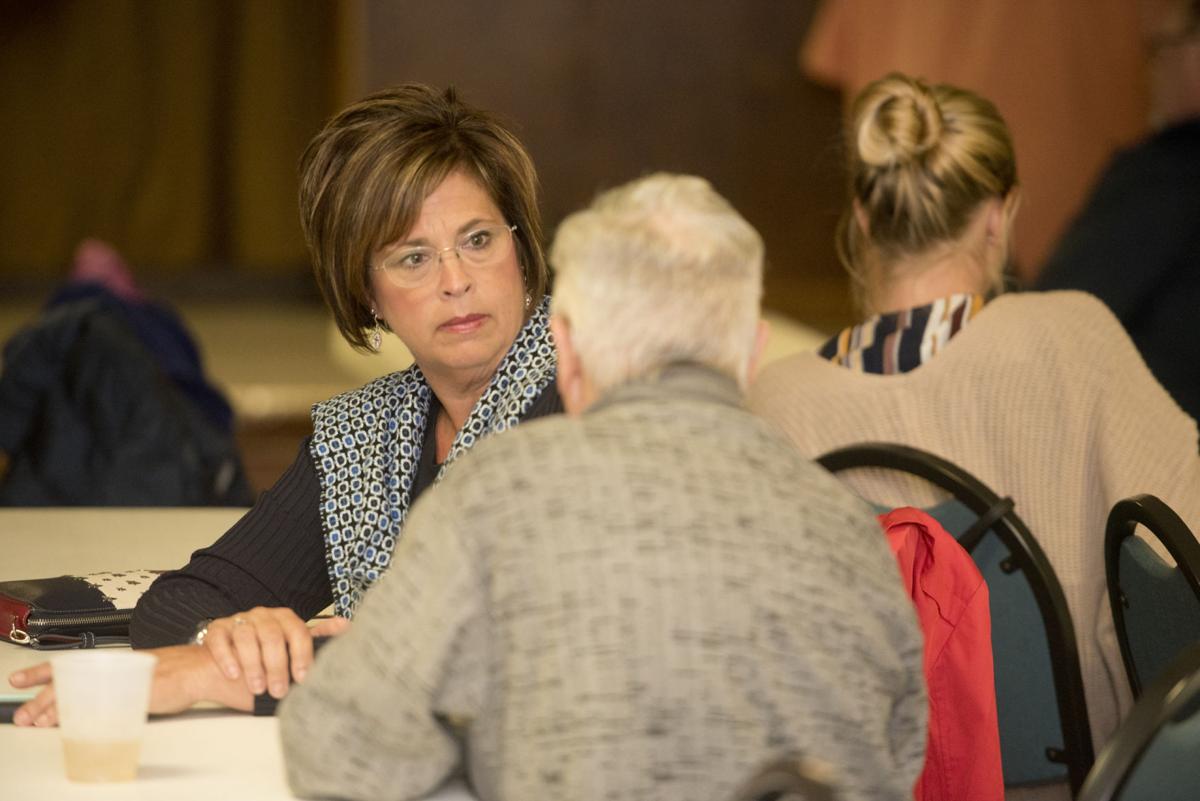 Chris Martin is congratulated by his mother, Flo Hudson, while holding his son, Cyrus.

Mayor-elect Chris Martin, left, and Councilman-elect Jonathan Nelms, both Republicans, congratulate each other on their victories.

The after-election gathering for Mayor-elect Chris Martin and City Councilman At Large-elect Jonathan Nelms officially started and ended with prayers.

“As Chris believes and I believe in the power of Jesus Christ, we’re going to start off right — with a prayer,” said Pastor Benjamin Grant of the Church of the Heartland.

Grant also compared Martin to a Biblical youth that slayed a giant.

“Just like David — he reminds me a lot of Chris,” Grant said.

At 28 years old, Martin will become the youngest mayor in Logansport history. Nelms is the youngest elected official in the city’s history.

Martin won by a narrow margin, gaining 51.4 percent of the vote — winning by just 57 votes. Voter turnout for the election was 23.8 percent.

It was Nelms’ first time running for an elected office, although Martin ran for the at-large council seat — and lost by three votes — in 2011 and ran again in 2015.

Before results came in, Martin said he decided to run for mayor because, “I felt like we could do better, and I felt that time was running out for our youth and for our voices to be heard by a more positive administration.”

Positivity and prayer were themes for the evening.

Halfway through the results coming in, Martin took to the stage at American Legion Post 60 and said, “The Republican Party is making a statement in Logansport.”

He then went into a prayer and ended with “we ask that you have a better path for Logansport tonight.”

The acceptance speeches began — after the crowd chanted “Chris” — with Nelms thanking the more than 100 gathered for their support.

“Neither me nor Chris will let you down, and we’ll make [Logansport] better than it was yesterday,” he said. “I was told my age would be a problem, but it was a benefit,” he continued.

Martin also acknowledged the crowd. “Ladies and gentlemen, we did it. We did it together,” he said. “We have a new slogan for Logansport: ‘Together we will succeed in Logansport.’”

“We stayed positive. We did not attack,” he said. He told the audience that the positive attitude will go on to the state and national levels.

“Enough with the negativity. It stops now. It stops here in Logansport,” Martin said. “We rose to the top because of one thing I did in those final days. I showed my faith in God. It’s time to put God in our community again. We’re not going to preach. We’re going to pray.”

He also said that in the next four years, Logansport will have a full Republican ticket.

Martin also told the crowd his three goals: work for higher paying jobs, create an outreach center for those who want help and announce a cabinet before Thanksgiving.

“That cabinet will be exactly what I promised — it will have experience,” he said.

After his speech, Grant led a prayer while the crowd extending hands towards the newly elected men.

State Rep. Stacey Donato was at the gathering.

“A pretty big day for Logansport, I think,” Donato said shortly after results began coming in. “It sounds like we’re going to have a Republican mayor, and the city is usually Democratic.”

Martin’s mother, Flo Hudson, said “together we will succeed.”

“It’s amazing. We worked really hard for it. We taught him he had to work hard for what he wanted, and he did,” she said.