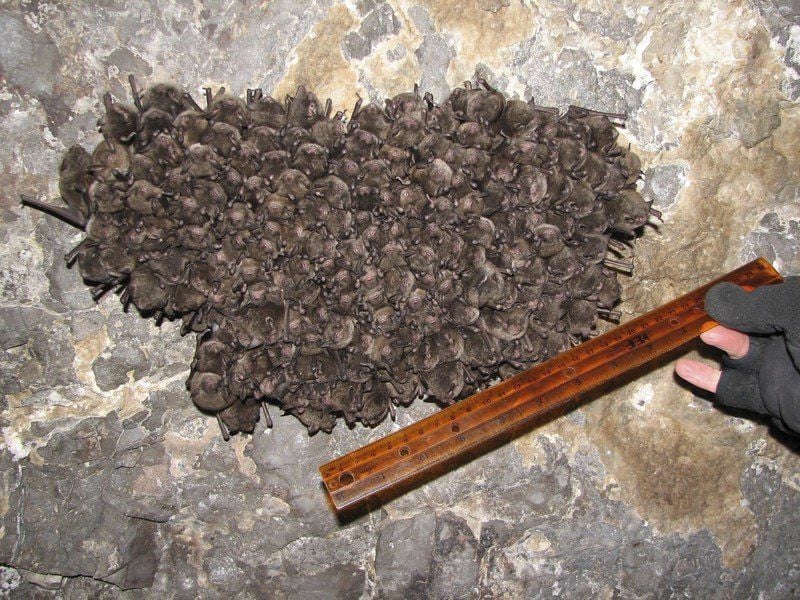 Indiana bats cling to a rocky surface during a survey conducted by the U.S. Fish and Wildlife Service in 2007. 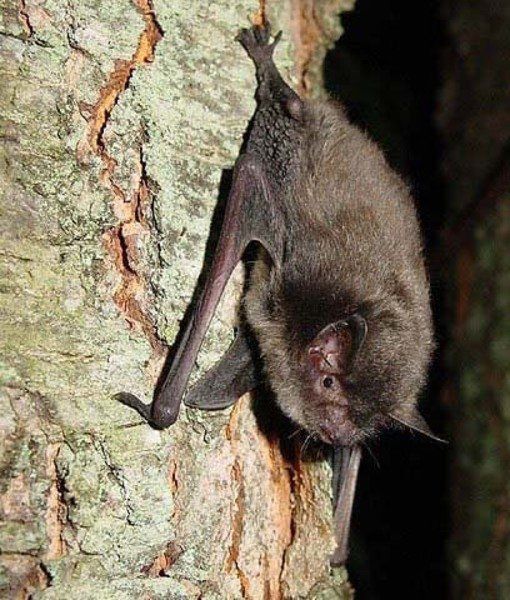 An Indiana bat clings to a tree.

Indiana bats cling to a rocky surface during a survey conducted by the U.S. Fish and Wildlife Service in 2007.

An Indiana bat clings to a tree.

Commercial wind turbine blades spin hundreds of feet up, in an airspace shared by bats and birds.

A plan for as many as 150 turbines about 600 feet tall is in the works for northern Cass County. Turbines' effects on bats and birds has been studied in Indiana and there are procedures that must be followed when the structures threaten certain species.

The study period spanned between Aug. 3 and Oct. 14, 2015 at the wind farm, which at the time of the report consisted of 355 turbines.

The report recalls a post-construction casualty study of bats that the firm conducted in 2009 for earlier phases of the wind farm project, during which a carcass belonging to the Indiana bat species was found.

The discovery of the Indiana bat carcass prompted the wind farm to work with the U.S. Fish and Wildlife Service to develop "a Habitat Conservation Plan for the Indiana bat designed to minimize Indiana bat casualties," according to the Western EcoSystems Technology report.

Part of that Habitat Conservation Plan included getting an Incidental Take Permit for Indiana bats.

The Endangered Species Act of 1973 defines take as "...to harass, harm, pursue, hunt, shoot, wound, kill, trap, capture, or collect, or to attempt to engage in any such conduct."

The Fowler Ridge Wind Farm report indicated that 164 bat carcasses were found at the wind farm in 2015 across six species, none of which were endangered or threatened.

There were also 122 bird carcasses found across 14 known species of birds and two that could not be identified, according to the report. None of the bird species reported are listed as endangered or threatened federally or by Indiana.

Almost 97 percent of the bat carcasses were found within 164 feet of turbines and over 43 percent were found between 0 and 33 feet, the report states.

The report indicates the wind farm's bat fatality rate estimates in 2015 were 72 percent lower than in 2010, surpassing the objective of 50 percent.

Operational strategies helped achieve that objective, according to the report, like feathering blades at wind speeds of 5 meters per second or slower.

A June 2016 Scientific American article about wind turbines killing bats defines blade feathering as turning blades parallel to the wind so that they don't rotate.

A 2016 report by Santec Consulting Services, Inc. out of Independence, Iowa evaluated effects on bats at the Wildcat Wind Farm in Indiana's Madison and Tipton counties.

The report indicates bat carcass surveys were conducted in spring 2015 and fall 2016 — the fourth year of monitoring.

Surveys resulted in 97 bat carcasses, none of which the U.S. or Indiana lists as endangered or threatened.

The report also states 19 bird carcasses were found during 2016 post-construction studies. That total includes two red-tailed hawks. The carcass of a marsh wren, which the state of Indiana classifies as endangered, was also found.

The Associated Press reported in 2016 on the new federal rule allowing wind energy companies and other power providers to avoid penalization for killing or injuring up to 4,200 bald eagles. Killing golden eagles is permitted under the rule as well as long as companies minimize losses. The rule also "requires independent contractors to provide data on bird kills to the government," the AP reported.

Neither bald nor golden eagles are endangered or threatened but they are protected under the Bald and Golden Eagle Protection Act and the Migratory Bird Treaty Act, which prohibit the hunting and harming of eagles without a permit.

Renewable Energy Systems, or RES, is behind plans for wind turbines in Cass and Miami counties, which a statement from the company calls Harvest Wind.

RES initiated wildlife surveys at the site in 2016 and began consultation with the U.S. Fish and Wildlife Service and Indiana Department of Resources the following year, according to the statement.

"We are continuing with a multi-year wildlife survey effort through 2017 and 2018 that will provide a robust set of wildlife data to evaluate risks from the project," the statement reads.

The company does not yet know if the project will require an Incidental Take Permit, the statement continues, adding such permits are not uncommon for wind projects in Indiana.

"We have already begun to take the USFWS [U.S. Fish and Wildlife Service] consultation into account by designing the project to minimize wildlife impacts and we will continue to work closely with the USFWS as we gather more data from the site to determine if and when to seek an Incidental Take Permit," the statement reads.

KITCHELL: Wind turbines a plus for Cass County

PUBLIC FORUM: Information gathering a must regarding wind turbines

Residents speak out against wind turbines

News first broke in January that county commissioners were considering the possibility of a wind farm being built in Cass County.