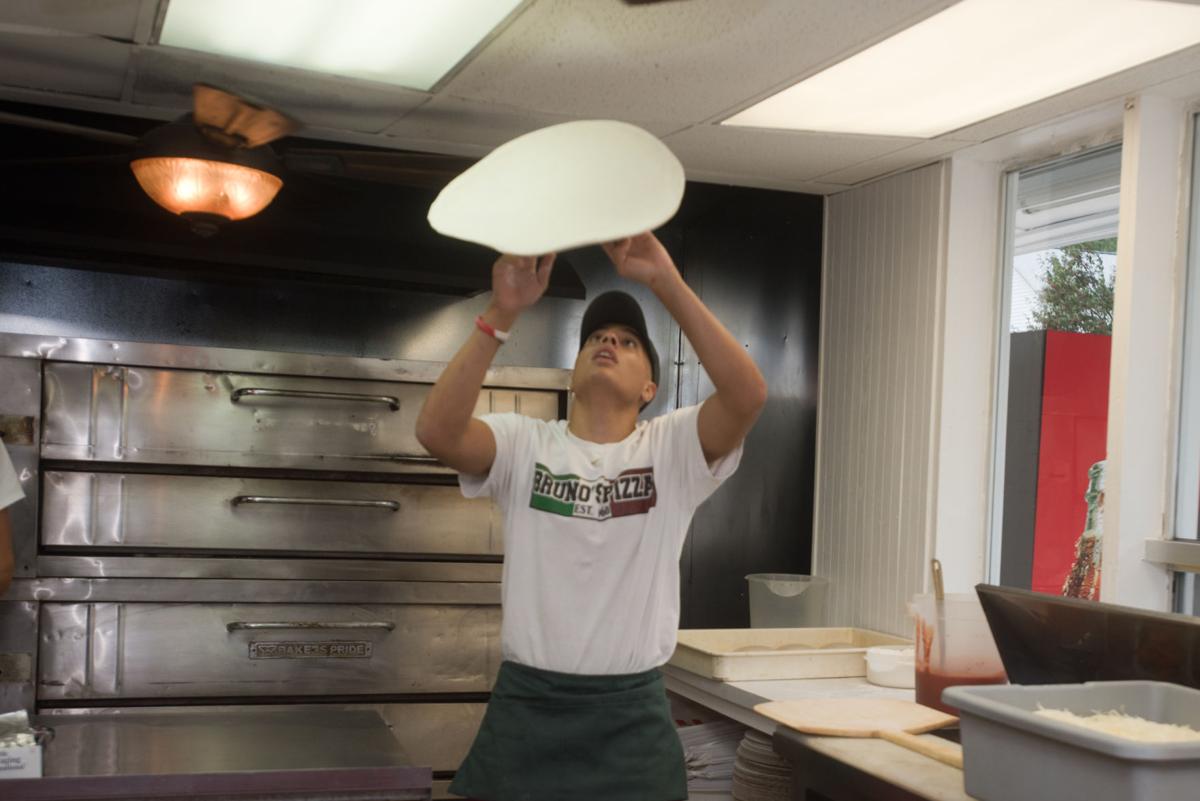 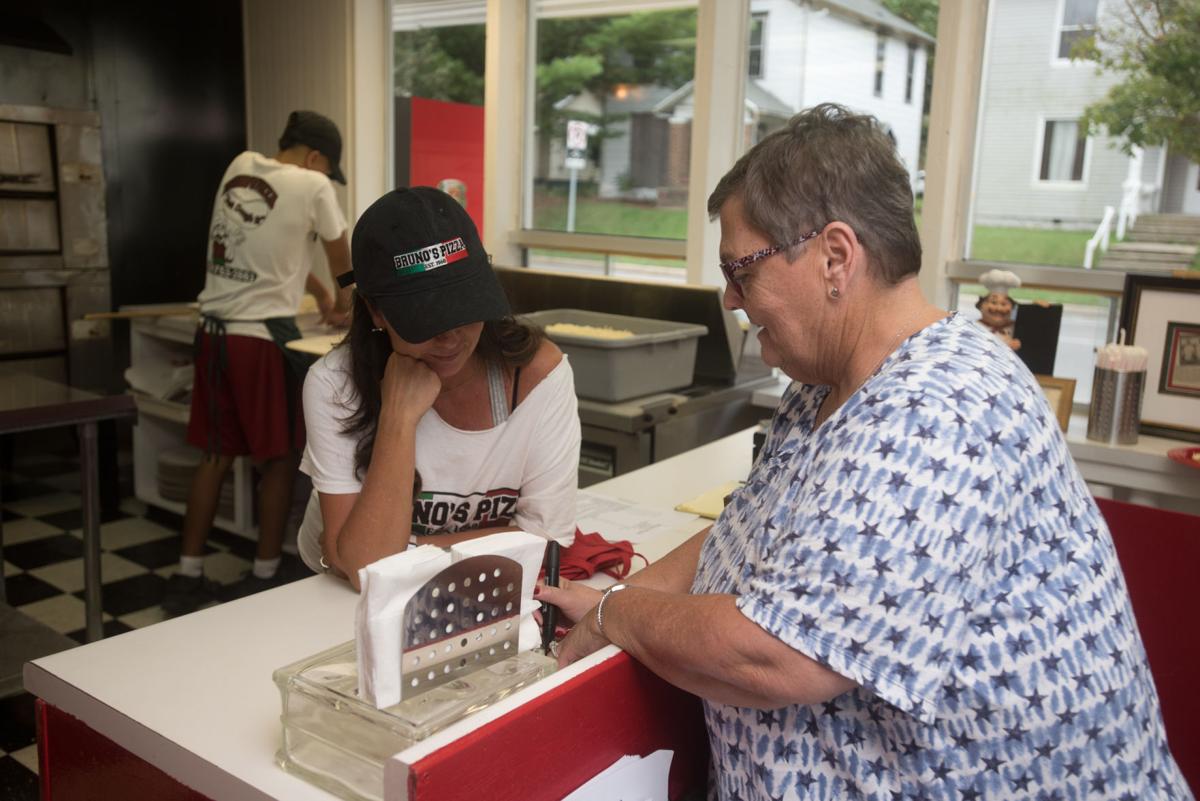 Susan Burge signs a dollar bill for Gina Dingo Curl in honor of being Bruno’s Pizza’s first customer at its new location. 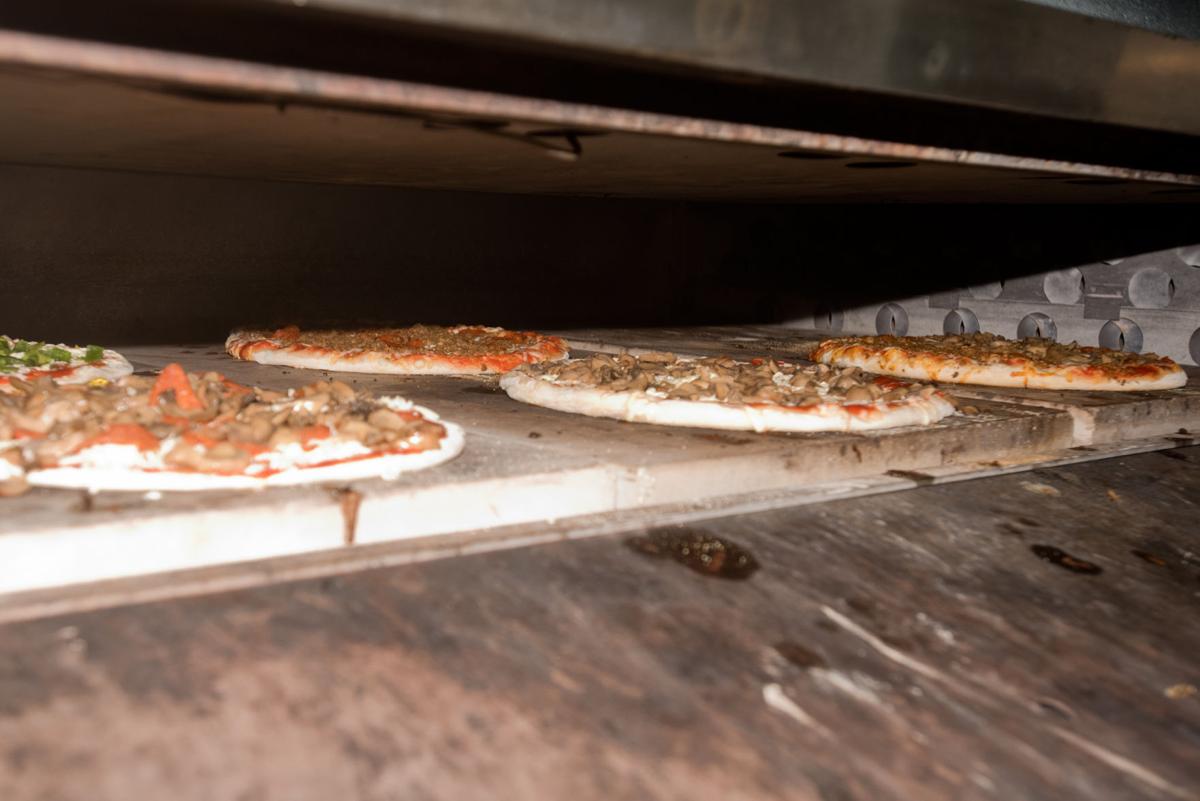 Over 20 pizzas were ordered in the first 20 minutes of Bruno’s opening at a new location. 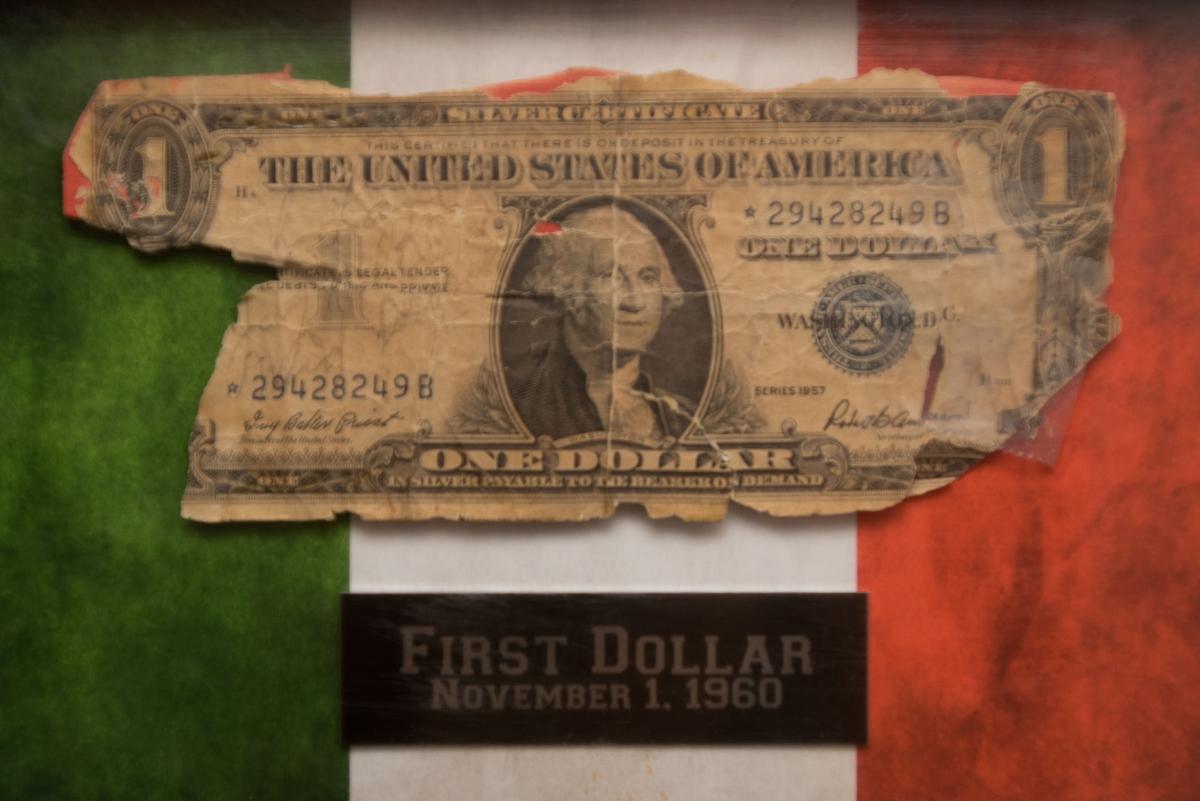 The first dollar ever made at Bruno’s Pizza was on Nov. 1, 1960. Tony Walters | Pharos-Tribune 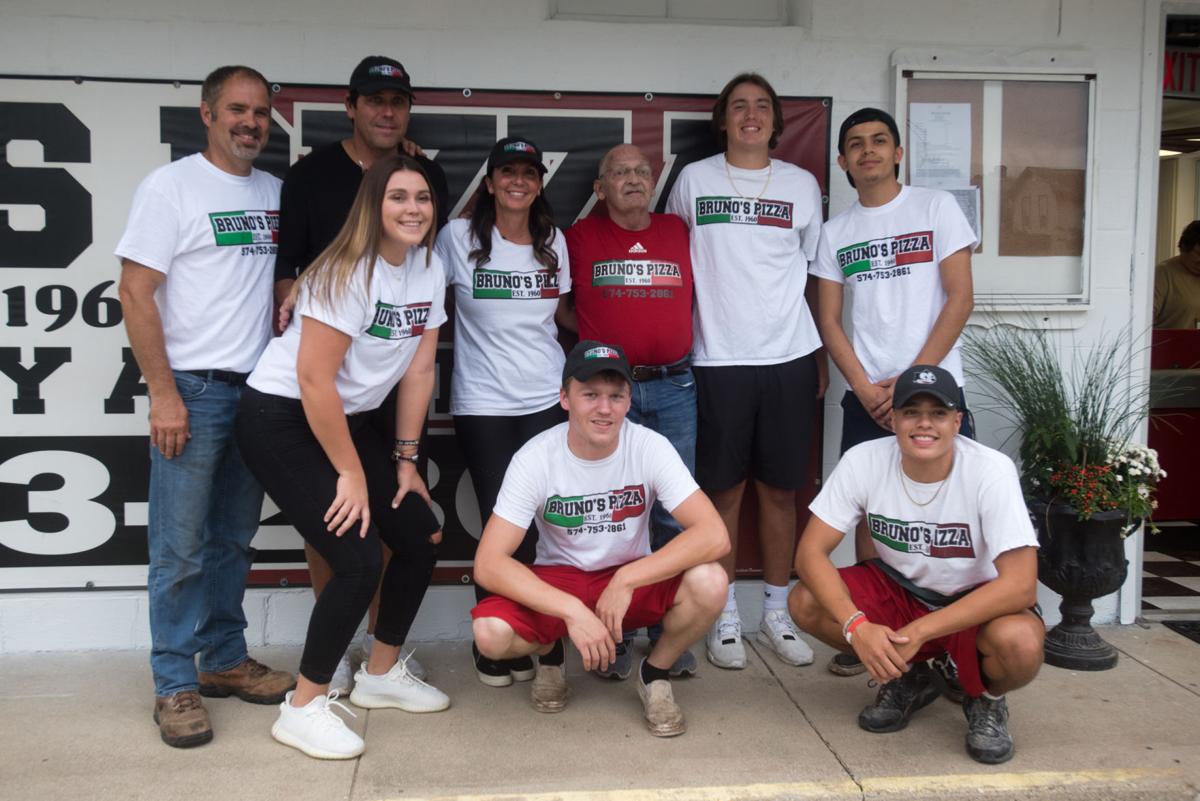 The Bruno’s family on opening night at their new location. 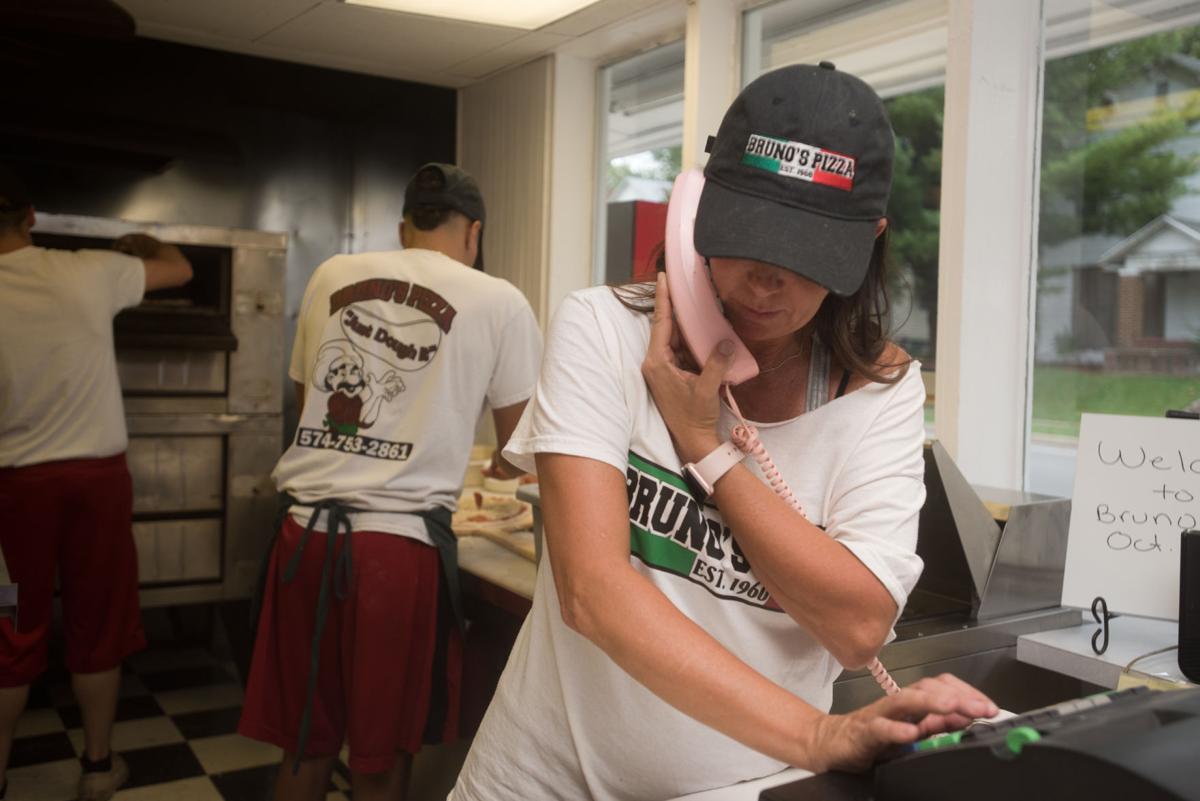 Susan Burge signs a dollar bill for Gina Dingo Curl in honor of being Bruno’s Pizza’s first customer at its new location.

Over 20 pizzas were ordered in the first 20 minutes of Bruno’s opening at a new location.

The first dollar ever made at Bruno’s Pizza was on Nov. 1, 1960. Tony Walters | Pharos-Tribune

The Bruno’s family on opening night at their new location.

Twenty minutes before Bruno’s Carry Out Pizza re-opened on Wednesday, it had seven orders.

By opening, her prediction seemed true.

At 4:15, they had 21 orders, while the phone kept ringing and people kept walking in to order.

It was the first day Bruno’s was in its new location at 1800 E. Market St., moving after almost 59 years in the same place down the road.

Many of the first customers she knew by name, exchanging kisses with some and writing names next to orders without asking who they were.

Susan Burge made sure she was the first customer and signed the business’s first dollar bill earned in the new location.

The original first dollar from the first restaurant is also on the wall of the new place.

“I’m thrilled for them,” said Burge, who is also friends with Dingo Curl and has been a customer for as long as she can remember.

The new building is the old Scoop’s Ice Cream and Sandwich Shoppe.

Dingo Curl said that she had help renovating the place, and the business moved in a week ahead of her Oct. 7 prediction.

However, it was also closed two days, one day longer because her father Mike Dingo — the previous owner — had some health issues and some of the move was delayed.

She likes the increased room.

“Amazing. I’m so glad to be here. It’s so much lighter and airier. And it’s so nice putting money into something you own,” she said.

The pizzeria had been renting the space at 2420 E. Market since the beginning, when her grandfather founded it.

“Bruno’s was started on Nov. 1, 1960 by Mickey Dingo with the help of his friend, Bruno Itin from Bruno’s Swiss Inn in West Lafayette, which is now known as Bruno’s/Big O’s Sportsroom,” according to the history written on its menus.

Five generations of family have worked there, and her father took it over in 1982 and remains active, despite recent health issues. Curl took over the business in 2004.

“The recipe hasn’t changed in 50 years, and our goal is to serve our customers for over 100 years,” it states.

Besides having more room and air conditioning, there’s a fountain soft drink machine, as well as the cooler holding soft drink bottles.

On the north side of the building, there’s a drive-through window that will be used for pick-ups Monday through Thursday.

Dingo Curl is concerned it will back up during busy weekend rushes.

There’s outdoor seating for the summer that includes an area for dogs, including dishes. The pizzeria may carry Italian desserts in the future, she added.

There were already some small desserts for customers coming in.

“Since it’s my birthday, I thought I’d bring some treats,” she said.

However, the business will still be the Bruno’s people know.

“We’ve kept everything the same — only better,” she said.

That includes people being able to see the pizza makers hand-tossing the crust dough through a picture window in front.

“That’s our trademark. I think that’s what makes us different. You can see us through the window,” she said.

Mike Dingo explained the loyalty of the customers who were there for the opening as, “I think we’ve got a pretty good product, we’ve got good help. My daughter does a pretty good job here.”

Jane Williams said she is turning 60 next month and has also been a Bruno‘s eater most of her life and loves the taste.

“I just wanted to be sure to get down here and support them on their first day,” Williams said.

“The pizza’s great, but Gina does all kind of stuff for the community,” she said.

That includes fundraisers for the schools and for Tri-Kappa sorority in its charitable activities.

Steve Arnold was picking up a pizza on the way home from work.

He also liked the new space.

“It’s a good repurpose for the building,” he said.

The former Scoops was shut for more than four years before Dingo Curl bought it and was originally a Dairy Queen.

Scoops closed in 2015 after the owners relocated to Florida for health reasons.