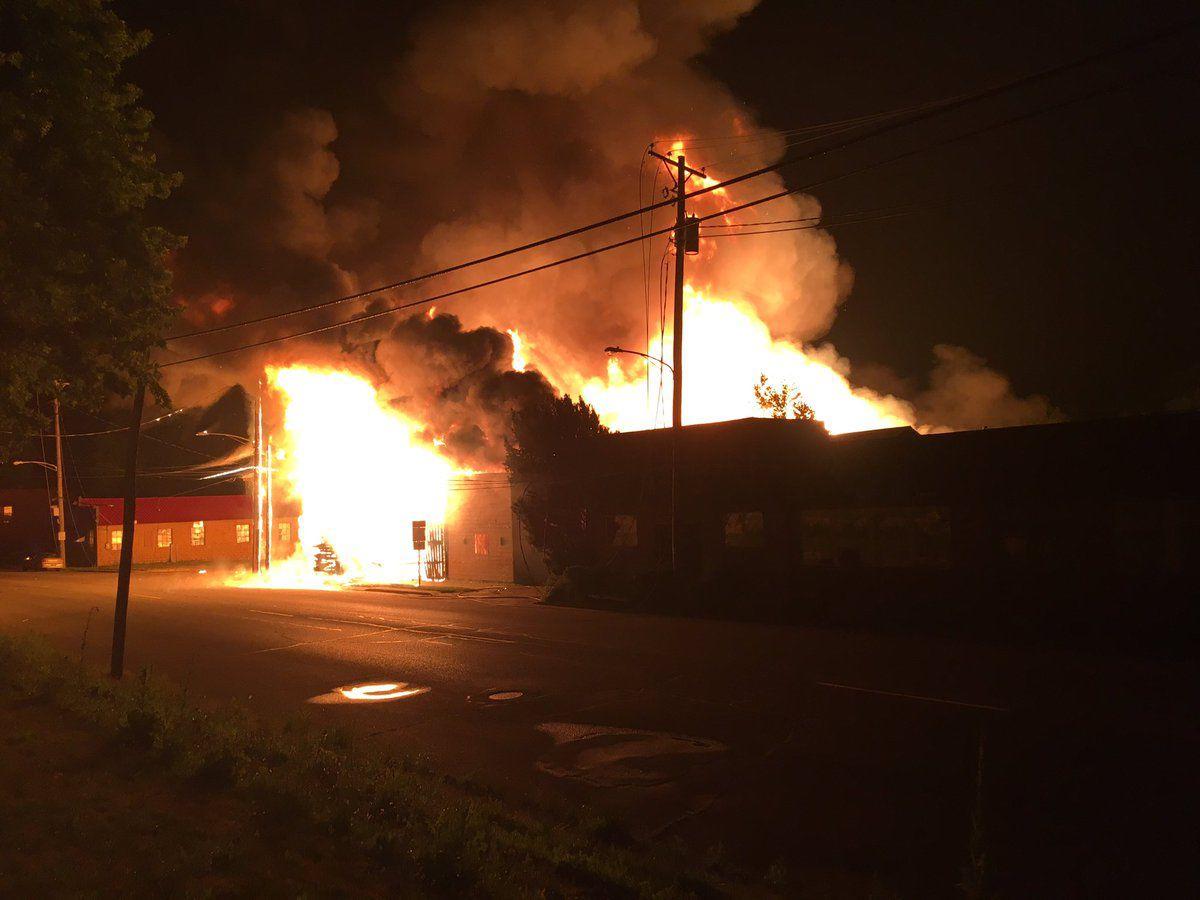 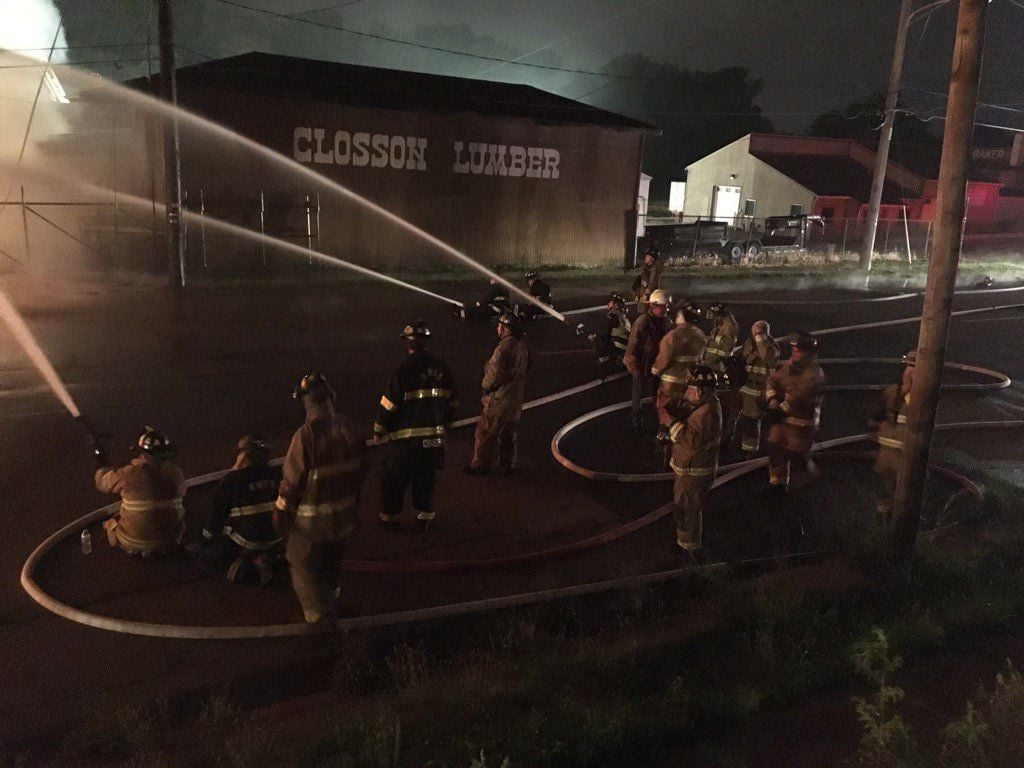 Firefighters battle a blaze at the Closson Lumber building on Erie Avenue in Logansport shortly after 5 a.m. Friday. 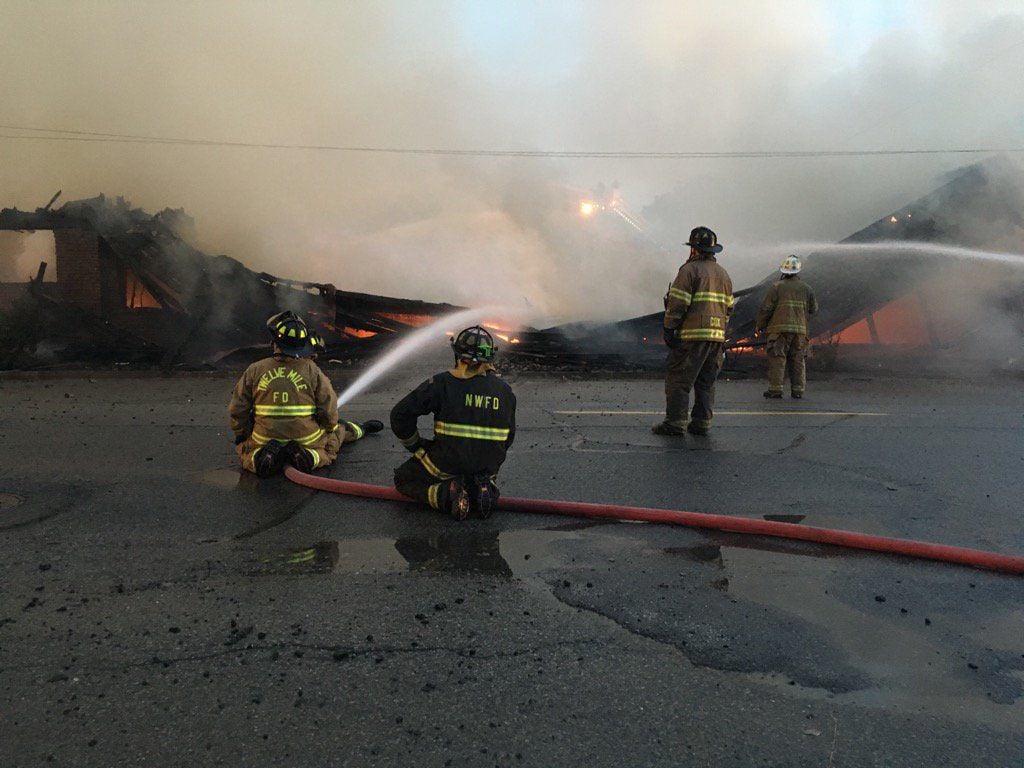 Fewer flames and more smoke billowed from the Closson Lumber building fire by about 6 a.m. Friday on Erie Avenue.

Firefighters battle a blaze at the Closson Lumber building on Erie Avenue in Logansport shortly after 5 a.m. Friday.

Fewer flames and more smoke billowed from the Closson Lumber building fire by about 6 a.m. Friday on Erie Avenue.

A Logansport city block was ablaze early Friday as flames tore through a lumberyard that had been in town for more than 100 years.

Much of the property was engulfed in flames upon first responders' arrival. Loud bursts erupted on nearby utility poles. The blaze billowed out of structures on the grounds, at times creating a heat so intense it drove firefighters back.

Firefighters attacked with hoses from multiple angles, including from above with a tower truck.

Logansport Assistant Fire Chief Mike Woolington said the circumstances called for battling the fire from the outside.

"Exterior firefighting only," Woolington said. "Our chief objective was to try to protect exposures and keep the fire from extending to the other buildings."

Fire departments from the surrounding area were called in to assist. Logansport Fire Chief Bernie Mittica estimated about 70 firefighters were at the scene.

Much of the fire had been extinguished by about 6 a.m., leaving less intense flames for the firefighters through the hours that followed.

Woolington said no injuries were reported to him.

View a photo gallery of the fire and its aftermath.

Jason Miller, investigator with the LFD, said the cause of the fire could not be determined. He added its area of origin was in the southeast corner of the basement of the showroom building, which stood in the middle of the property along Erie Avenue.

"We couldn't rule out all reasonable accidental ignition sources, so therefore it is an undetermined fire," Miller said Friday evening.

He went on to say the amount of destruction in the fire's area of origin contributed to the inability to determine a cause.

A building at Galbreath Industrial Services west of Closson Lumber and an apartment east of the lumberyard across Ninth Street were scorched by the fire as well.

Ed Closson, who owns the lumberyard, said his great-grandfather moved the business to Erie Avenue in 1902.

He said "how I'm going to take care of my family" was at the front of his mind as he stood across the street from where the flames raged.

Closson had been in the process of closing down the lumberyard and an antique shop he ran on the property.

Because Closson was going out of business, he said the property didn't have a lot of inventory. There were cedar boards, veneers and moldings in the lumberyard, he added.

Those and other products helped him build up a large clientele over the years, Closson said.

Grant Putnam Jr. worked at Closson Lumber from 1976 to 2004. He recalled his and his wife's reaction to news of the destruction by phone Friday afternoon.

"We were physically shaken, it was just startling," Putnam said. "It was just unbelievable."

The lumberyard provided a fulfilling job for almost three decades, Putnam continued, going on to express his admiration of the Clossons.

"We sold quality materials, that's what they were known for — having that quality lumber and good service. They're a respectful family."

He went on to recall the showroom and offices in the building in the middle of the property along Erie Avenue, the basement wood shop and the buildings on the grounds used to store various woods and materials.

The building on the west side of the property that bears the company name was the only one that didn't collapse in Friday's fire.

Robert Dunderman, manager of Logansport Municipal Utilities' electric distribution department, said the fire led to power outages near Closson Lumber and on the city's south side.

Between 350 and 400 customers were affected for about a half hour, he continued, adding it took a little longer to restore power to about 20 who live near where the fire occurred.

LMU workers carried out temporary repairs to maintain power over the weekend and will return Monday for permanent fixes, Dunderman continued.

It was the LFD's second fire of the day. Firefighters were clearing the scene of a small blaze at a former downtown dry cleaner when they were dispatched to the lumberyard.

Closson Lumber Burns To The Ground

A pre-dawn fire Friday, July 8, at Closson Lumber, 815 Erie Ave. in Logansport, burned multiple buildings to the ground. Opened on the site i…

Charmaine (Bender) Gralton died at home on June 3, 2020 in North Fort Myers, Florida, where she had lived for the past 38 years. She was born in Logansport on March 24, 1941 to Bernard W. and Betty (Flory) Bender. She was preceded in death by her parents; her husband of 54 years Paul Gralton…

Funeral Services for Joan Swigert, 70, Fort Wayne, will be held at 1 p.m. Friday, July 3, at Fisher Funeral Chapel. Friends will be received from noon until the time of the service. Interment will follow at Mount Hope Cemetery. Visit www.fisherfuneral chapel.com for her complete obituary.