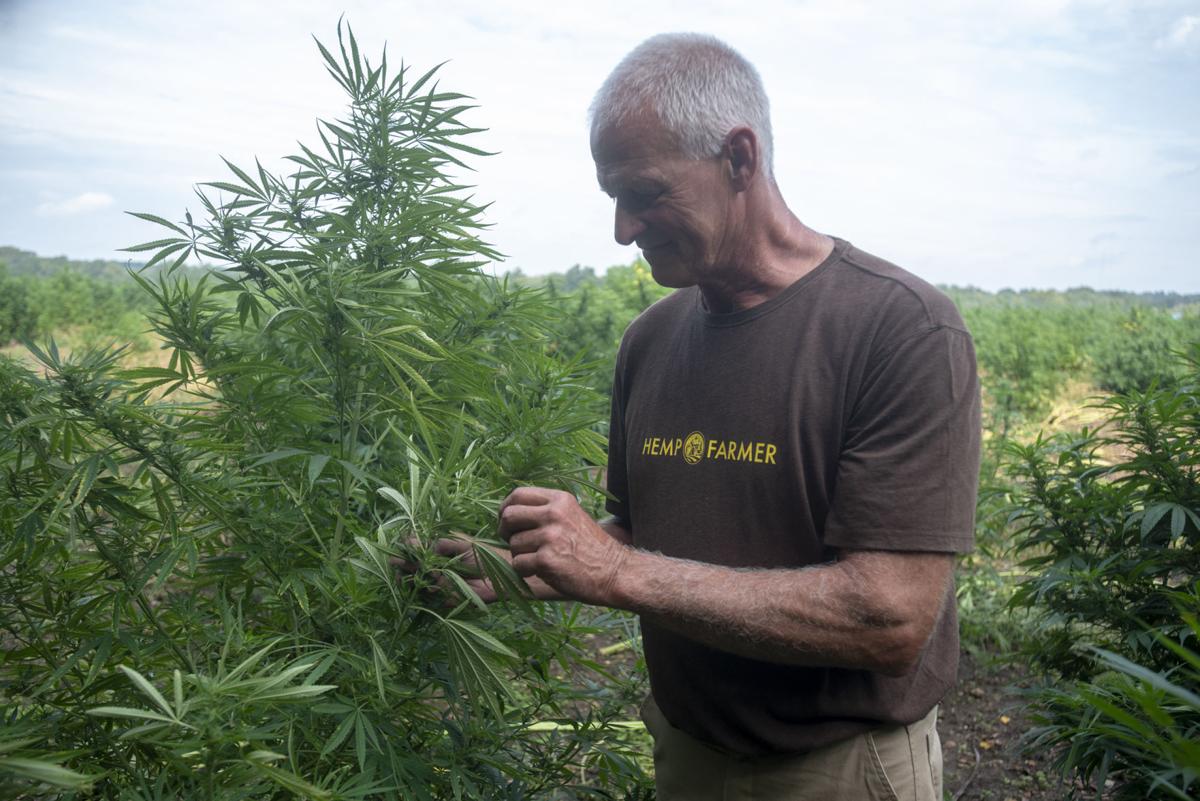 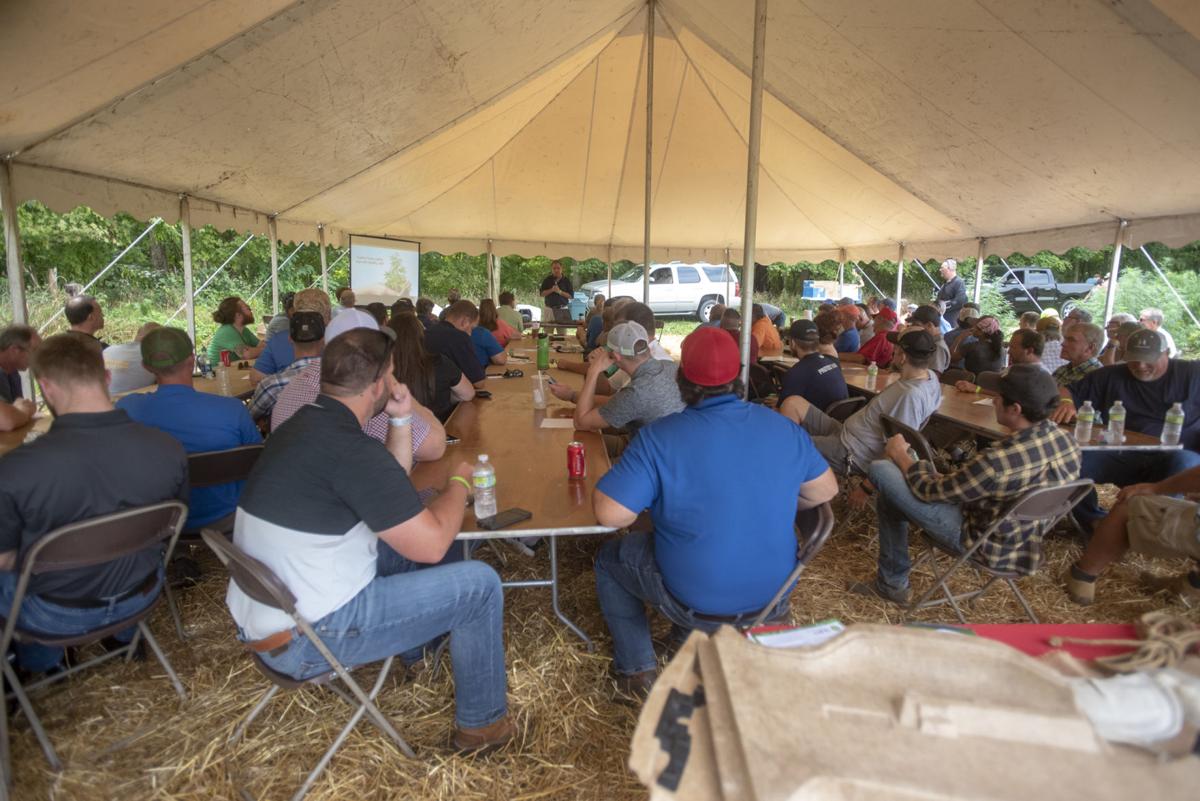 About 100 people attended a field day symposium about hemp farming and the CDB oil that’s derived from it at Chuck Stephenson Farms southeast of Logansport on Friday. 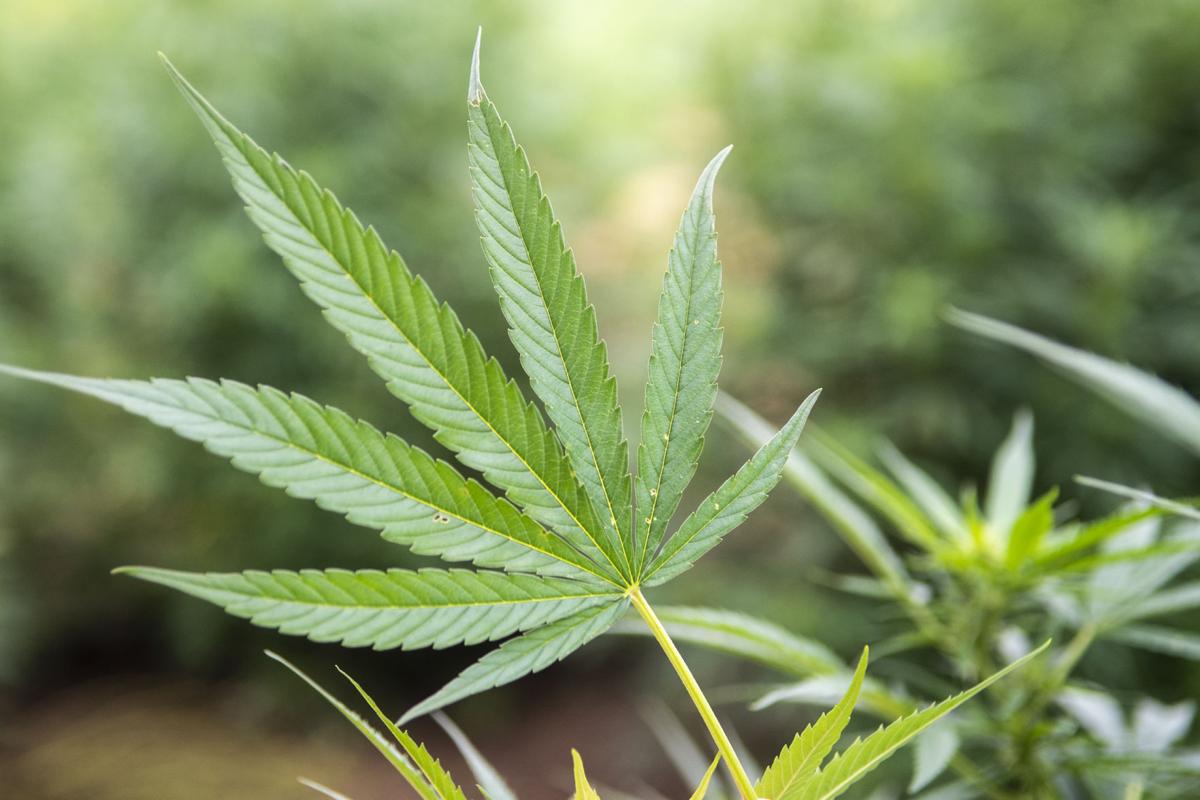 A closeup of one of the hemp plants on Chuck Stephenson’s farm. Stephenson was the first farmer in Cass County to try his hand at farming hemp since its restriction was lifted. 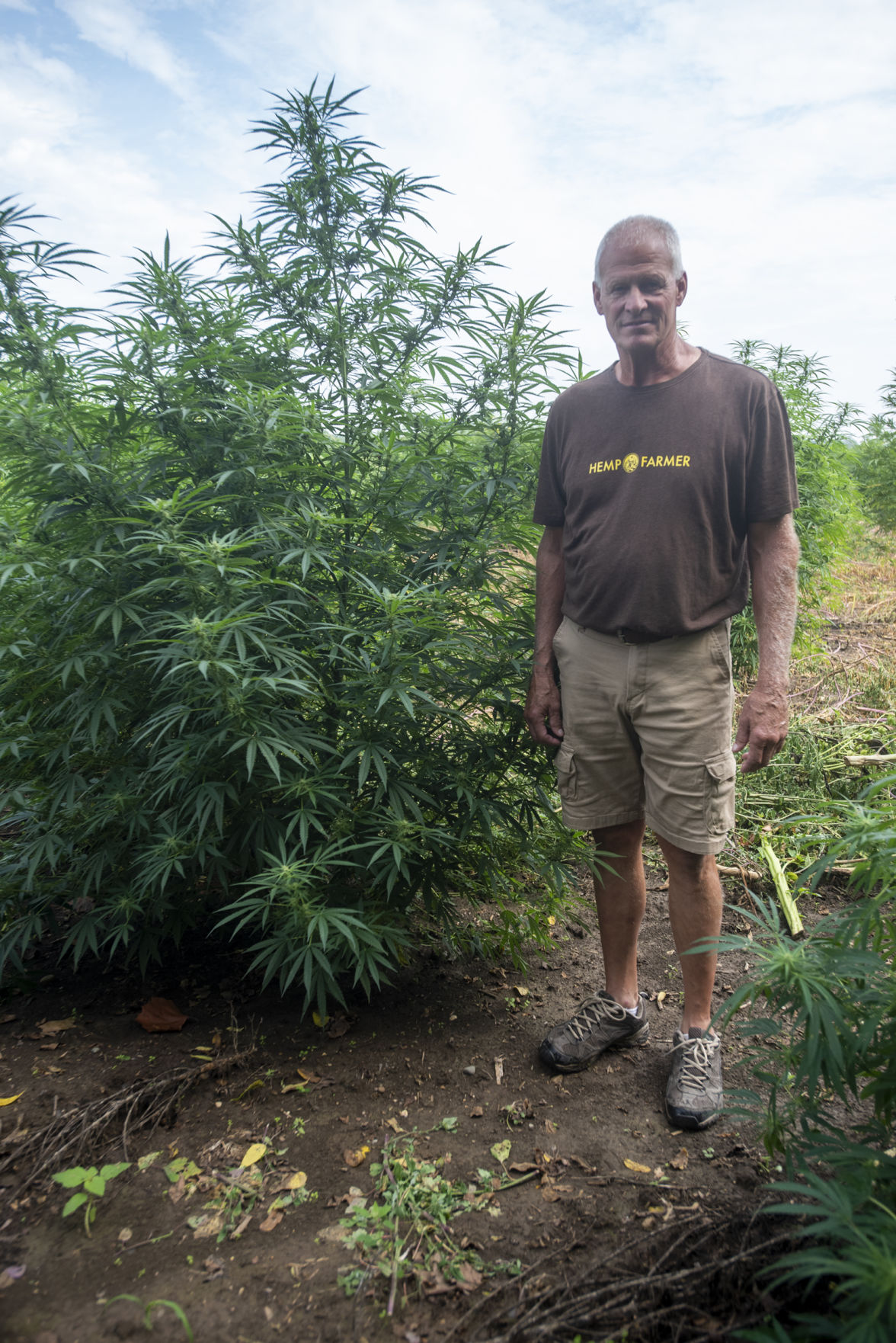 About 100 people attended a field day symposium about hemp farming and the CDB oil that’s derived from it at Chuck Stephenson Farms southeast of Logansport on Friday.

A closeup of one of the hemp plants on Chuck Stephenson’s farm. Stephenson was the first farmer in Cass County to try his hand at farming hemp since its restriction was lifted.

From a distance, Chuck Stephenson farms southeast of Logansport looks like it’s planted with rows of evergreen trees.

The crop is getting close to harvest, and on Friday, about 100 people — interested farmers, Purdue University agriculture experts and curious entrepreneurs — were at the farm for a field day symposium about hemp farming and the CDB oil that’s derived from it.

Hemp, which is related to cannabis but doesn’t contain enough THC to produce a “high,” has been legalized as a crop since 2018, when the federal farm bill allowed states to grow and regulate hemp for the first time since World War II.

“I just thought it was interesting,” said Stephenson, who’s also farming 250 acres of corn and 250 acres of beans.

“Corn and beans had been in a rut, prices not great,” he’d stated in an email before the symposium. “Wanted to try something new, thought it would be an exciting crop and would fit in rotation with corn every year.”

His son-in-law, who helps manage the farming operation, had connected him with Third Wave Farms out of Kentucky, and that group is partnering with him on the crop, taking it to a CBD oil processor in Michigan City after harvest.

Third Wave Farms and the Hemp Chapter of the Indiana Farmers Union held the symposium on his land to introduce farmers to hemp as a crop. Stephenson liked the idea of having the seminar in a tent among his crop because he wants to get others involved in what looks like a new industry.

“I think there’s plenty of interest in the hemp production, not just the oil but the fiber,” Stephenson said.

Marguerite Bolt of Purdue’s Department of Agrimony and the department hemp extension specialist, said, “There’s been a really big turnout at hemp events.”

A Purdue extension event in Hartford City brought 350 people, including those interested in processing and manufacturing.

“There’s definitely a shortage of processors,” she said.

Right now, about 60 percent of what’s grown is used for fiber for cloth or paper, about 35 percent is for CBD oil and the rest is for grain — cultivating the seeds for farmers, she said.

It’s not used for ethanol currently.

Farmer Doug Meyers of Westville came to the symposium because “we’re interested in growing it.”

His farm has a license to grow for fiber this year but didn’t use it because they weren’t prepared with a bailer or buyer, but he’s optimistic about hemp.

“I think the fiber is the future because there are so many things you can do with it,” he said.

Robert Macher of Moon Grove Farms in Springville, said, “I can’t see any negatives to it.”

CBD has health benefits, and “the fiber aspect of it has even bigger benefits,” he said.

It gives farmers an alternative income, but if they don’t get aboard now, they may miss out, he said. He isn’t planning large scale yet but is interested in starting.

Not all attending the symposium were farmers.

Rocky Lamb and Tony Graham of Kokomo are considering processing for CBD but in small, craft batches.

“It’s like a microbrewery, really. Anyone can make a beer, but can you make the perfect beer that that one gentleman wants,” Lamb said.

Jim Cauk of Lafayette and formerly of Galveston has retired now that he’s 80 but still owns land and keeps interested in farming and what could be grown on his land. He held up some hemp rope on display and noted how soft it is and how smooth the cloth made from hemp fiber is.

Nick Capinski of Heartland Growers, a greenhouse in Westfield, sees potential in the plant.

“We’re looking into it and seeing if we can’t help farmers by growing clones [of plants],” he said.

The turnout of farmers who came to the event was a good sign for Mike Lewis, Third Wave Farms’ co-founder and director of agriculture.

“I’m glad to see we have actual farmers here,” he said. “Usually we get consumers or speculators.”

Many cannabis growers across the country are also turning to hemp now that the cannabis market is saturated.

Many people getting involved in hemp aren’t experienced farmers, and they’re running into problems. There are a lot of speculators trying to get involved.

“You’ve got business people trying to direct farmers,” he said.

Some are selling plants and seed to inexperienced growers and to people who haven’t planned how to harvest. Some were sold seedlings or seeds and told they could make a lot of money.

“Nobody thought about drying,” Lewis said. Some are trying to do that in tobacco barns, and others are asking to use his facility in Kokomo, which is booked.

He pointed to a plant on Stephenson’s farm around the symposium and the size and shape.

“That’s why they have trouble drying them in tobacco barns, because you can’t move air through there like you can tobacco leaves,” he said.

“It’s such a conundrum we’re in because we need farmers. We need stewards,’ Lewis said.

Lewis was instrumental in getting hemp legalized as a crop in Kentucky, where he farms it, but hadn’t considered growing it until Patagonia approached him with a grant. It’s his sixth year growing hemp and first year making money.

“That’s because we had to learn it,” he said. “Indiana was great. When they decided to do it, it was with open arms,” Lewis said.

Third Wave Farms also works with getting the crop directly to processors, cutting out brokers and giving a bigger profit. “We did this backwards. Everybody else started with planting. We started with the customers,” Lewis said.

Stephenson is the first Hoosier farmer that Third Wave Farms has worked with. He started helping his father farm when he was young. His dad died when he was 12, so he worked for a neighbor and took that operation over when the neighbor retired.

He had to get licensed to grow hemp and had to register each field of it with the state police. Some helicopters go overhead, but he hasn’t heard anything from them. “They probably keep a good eye on it,” he said.

His neighbors and three landlords had no problem with him farming hemp. “They’re interested to see how things are going to grow,” he said.

He’s had some trouble with kids trying to sneak on the farm to steal some of the plants. However, each of the different strains of hemp can legally only have .3 percent of THC or the plants bearing those seeds would be destroyed.

Third Wave Farms has dryers and a buyer for Stephenson’s harvest, and they helped fund the seed and provide workers. “That is why I decided to go with Third Wave Farms,” Stephenson stated. “They’re taking care of me. If it all goes south, I’ll still be able to farm for a year,” he said.

He acknowledged that hemp is more labor intensive than corn or beans. Stephenson was able to cultivate the ground once, and using a modified bean planter, put the plants 30 feet apart rather than the usual 15 feet for other crops. He’s not able to use pesticides on hemp because they’ll kill it.

Third Wave Farms has weeding crews come in, with a $30,000 a week payroll and rooms at a local motel rented for the growing season. Stephenson said that’s not as much as Indiana Packers or Tyson Foods, but it adds to the local economy.

Despite some troubles, the plants have held up well in this summer’s wet and dry climate, Stephenson said. “Once the plant is up and growing, it’s more drought resistant than corn and beans are,” he said.

He didn’t have to irrigate it like his other crops. It also has a good root structure that helps pull nutrients from the soil. Lewis added that they’re also frost resistant.

“They don’t mind frost. In fact, it increases the oil content,” he said.

Despite the hard work in his first year of hemp farming, Stephenson is considering another year of growing it. “[I] probably will, depending on how it turns out in the end. Maybe not as big a scale,” he said.

His advice to any who follow his lead is to know what they’re up against and have a place to take the crop. And have a reputable partner.