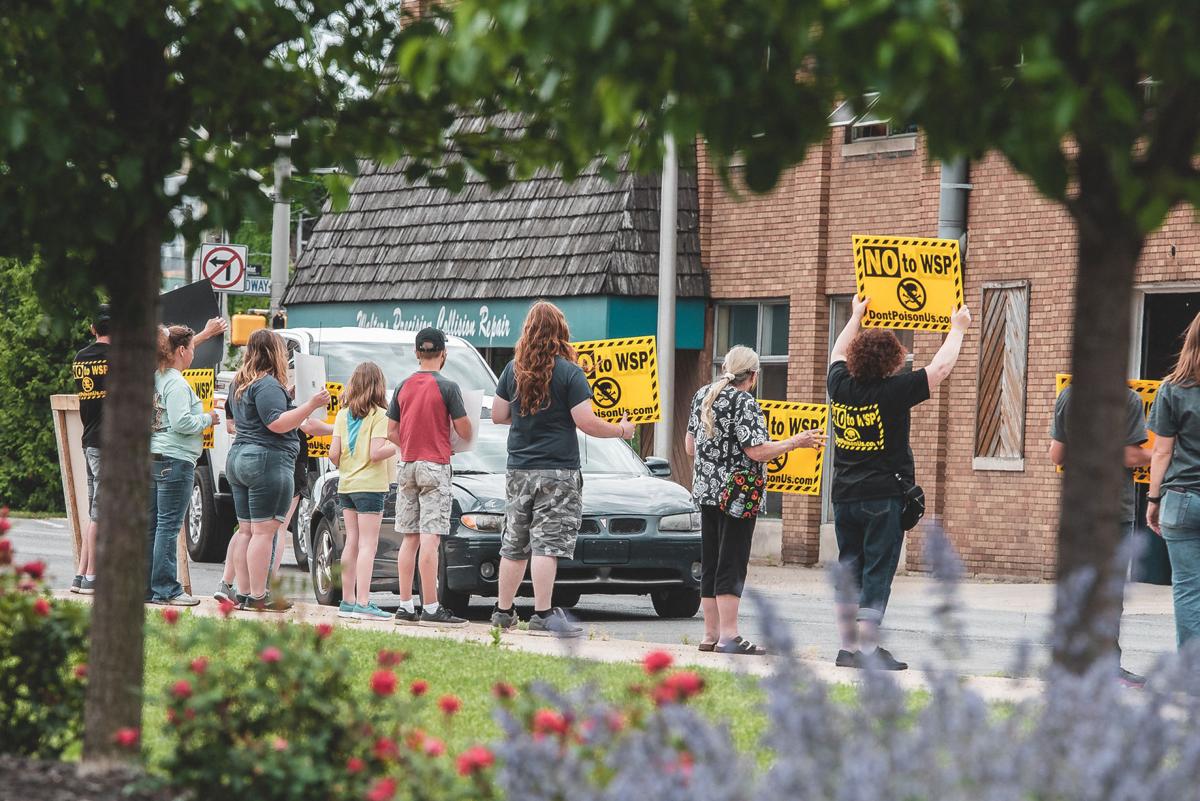 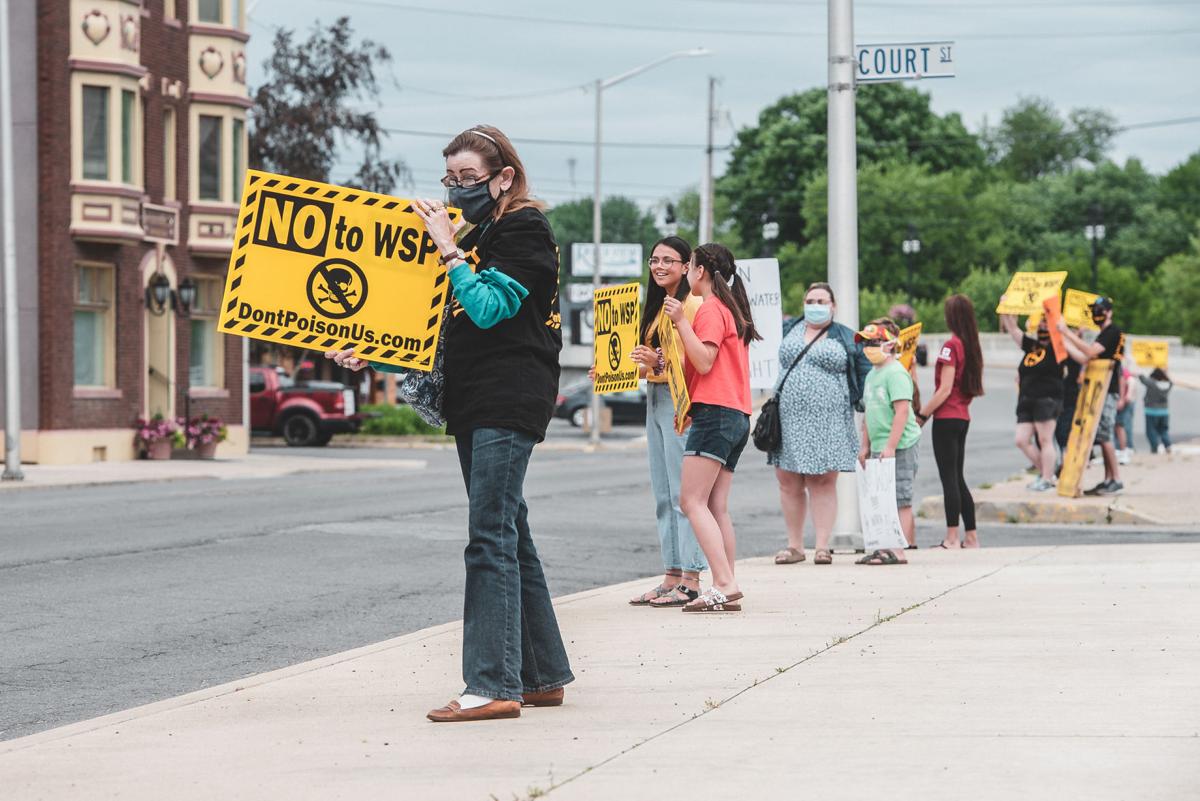 Protesters line the sidewalk on Third Street to express thier views on WSP. 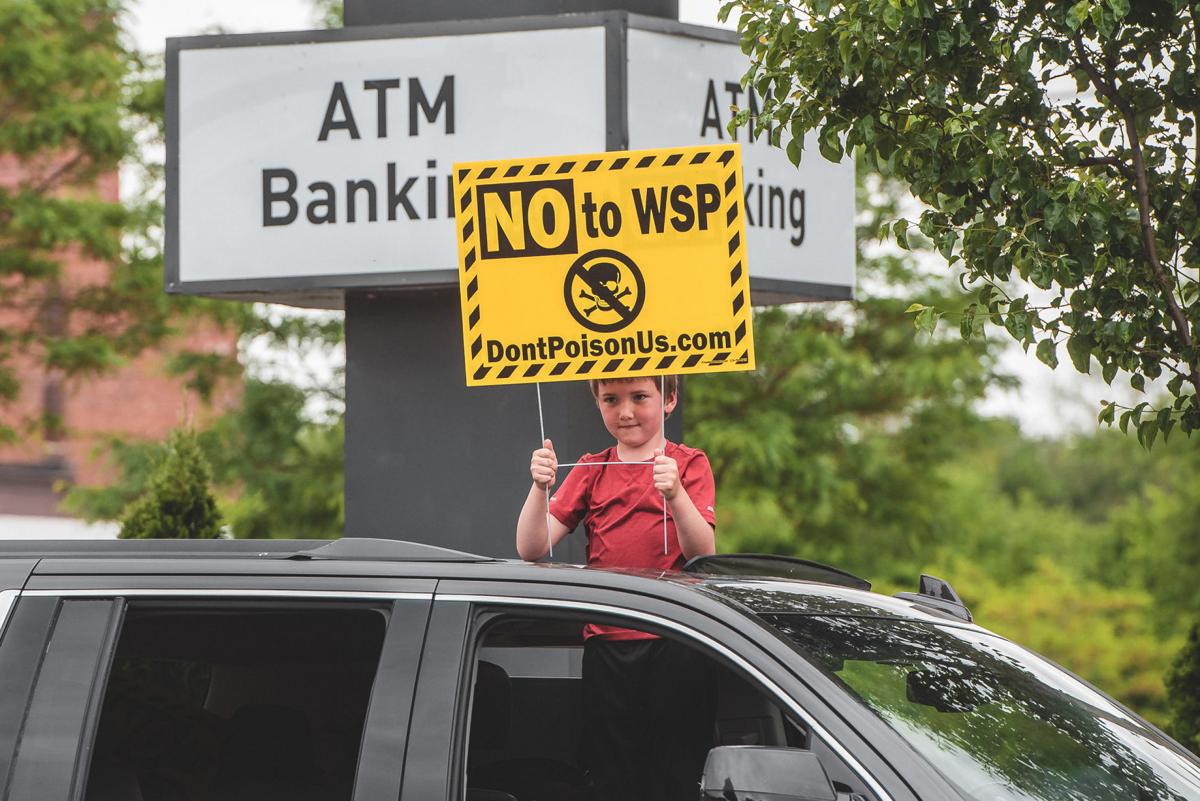 A boy could be seen standing out of the sunroof of his mother’s vehicle on Broadway to protest WSP. Tony Walters | Pharos-Tribune

Protesters line the sidewalk on Third Street to express thier views on WSP.

A boy could be seen standing out of the sunroof of his mother’s vehicle on Broadway to protest WSP. Tony Walters | Pharos-Tribune

The Cass County Redevelopment Commission voted at a special meeting Monday to sell Waelz Sustainable Products Holdings (WSP) 54 acres of land in the Agribusiness Park near Clymers for $10.

To receive the land, located near the intersection of County Roads 300 South and 375 West, WSP must create jobs through its zinc reclamation plant proposed for the site, according to Resolution 2020-07.

The redevelopment commission originally bought the land for $1.14 million in April 2015 for “Project Outdoors.” That company did not come through, Cass County Commissioner Jim Sailors said May 6 on WSAL radio’s “Talk of the Town.”

Sailors is also on the redevelopment commission.

The deal with WSP still has to go through the closing process. WSP also needs to get its Title V air permit from the Indiana Department of Environmental Management and to get the incentive package approvals from the county, according to an email from a company spokesman.

Attorney Jim Brugh, an opponent of the proposed plant, said that the Redevelopment Commission also needs to finish redistricting of the Tax Increment Financing (TIF) area to pertain to WSP alone. That was on the agenda of an April 15 meeting that was cancelled due to COVID-19 restrictions not allowing for public input, he said.

Indiana Public Access Counselor Luke Britt had contacted the county about it after Brugh filed a complaint.

At Monday’s meeting, attorney Lisa Lee, special counsel from Ice Miller in Indianapolis, read key parts of the resolution and the purchase agreement. The redevelopment commission is selling WSP the land at the low price because it is acting on its proposal to bring businesses to the county, she said.

The land agreement also requires WSP to have a certificate of occupancy for the plant by Dec. 31, 2025.

If WSP does not meet the conditions of having an operating business by 2025, the land will revert to the redevelopment commission for $10 and WSP would be responsible for removing any changes to the land.

If Cass County fails to pass a bond issue for improvements to the land and doesn’t complete infrastructure improvements for the land, the Redevelopment Commission will buy back the land at a cost determined by appraisers or for WSP’s out-of-pocket expense, Lee said.

Improvements would be the fire suppression system planned for the Agribusiness Park and fiber line to the site, said Christy Householder, Cass County Economic Development Director.

WSP will pay all closing costs for the transfer of the title, according to the agreement.

The redevelopment commission is also selling the 54 acres through a limited warranty deed instead of a general deed.

Lee said with a general deed, the county would be responsible for any problems on the land, protecting the buyer from any defects or problems.

With the limited warranty, the county won’t be held responsible for that and agrees it never made any changes to the land, she said.

The land, along with the two parcels west of that owned by WSP, would make about 130 acres, according to WSP.

The commission members didn’t discuss the resolution before voting unanimously for it. There were 14 people in the audience, but the agenda didn’t have public comments time for them to speak.

The redevelopment commission members began leaving after the meeting adjourned, and there was no interaction between them and residents who came to the meeting.

Protesters were outside the Cass County Government Building, starting a half hour before the meeting, and again later in the day before and during the Cass County Commissioners 1 p.m. meeting.

At the afternoon county commissioners meeting, about 11 of about 20 people attending did speak against the WSP project during the public comment time.

The commissioners didn’t respond to the questions or comments.

Brugh said there that the redevelopment commission had previously put a public comment section on its agenda, but it hadn’t for the last two meetings.

“I think that is a violation of the public trust in officials, including those appointed officials,” Brugh said. “This morning they dealt with an issue with a million dollars. Not a single word of discussion. No permission for the public to speak about our money. That’s the public’s money. TIF money is all public money.”

A Hodgkin’s lymphoma survivor, he said he’s scared for his health and compromised immune system and wants assurances that the plant will release no lead and no mercury into the air.

“I put my trust in you gentlemen when you were elected,” said Nickel. “I asked you to do the right thing for me, my family, my friends, my community. So far, I have not seen that. This project has just divided the city, divided this county. It has been done quietly. It has been done secretly, to my opinion.”

Erika and Maximo Gutierrez have a house adjacent to where WSP wants to build, and the company has been trying to buy their home.

But they don’t want to sell their home, and people have been coming into his driveway taking photos of their home.

“I don’t know what this company is going to do to our town, but so far it has made so much damage without even being in business,” said Maximo Gutierrez.

“They tell us, ‘We’re going to get an appraisal for your house’ and that’s going to be it. Nobody cares about my family. I’m the only one,” he said. “I promised my kids that I was going to build a tree house. How can you buy a dream? How much do dreams cost? So I’d have to tell them that we will just to have to move out of here because this is not going to be safe for us.”

Resident Dave Price said, “It’s not too late to correct this mistake. This company was booted out of Muncie, Indiana, for great reasons.”

He asked how much marketing the county has done for the property.

“There are so many great companies in the world that could settle here that are not going to harm us. It’s not too late to back out of this deal. Don’t be desperate to settle for WSP,” Price said.