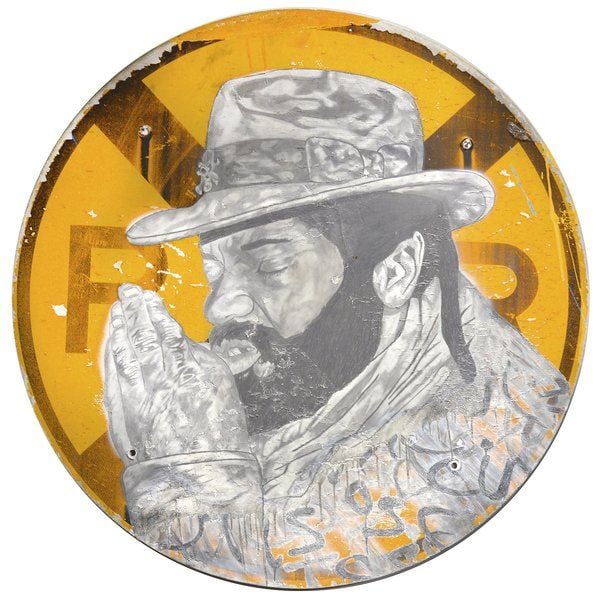 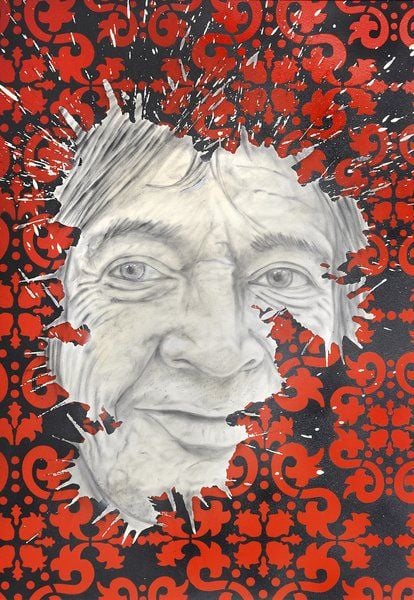 "To be totally honest, I did not enjoy high school and was the person who would constantly look at the clock — how much time is left in the day, the year, the semester?" the 2002 LHS grad said.

But as that art course continued and he got started on his first project, he began to feel differently.

"That was the first time that anything ever spoke to me that there was magic in the world," he said.

Suddenly the kid who always stared at the clock was immersed in the task at hand.

"I'm just getting started!" he remembered thinking when the bell rang.

Now the professional artist's work is being displayed where the love for his career began in the Logansport High School art gallery's latest exhibit.

Leeman left Logansport after high school and went on to travel the world, living out of a backpack and working odd jobs to fund his journeys. The mostly self-taught artist has used a mixture of flour and water called wheat paste to hang his works on exterior walls in Columbia, Mexico City, New York, Palestine, Israel and India.

He currently lives in the Tenderloin neighborhood of San Francisco, a community he calls "truly a melting pot" with its large populations of immigrants, refugees and homeless a short distance away from the headquarters of major corporations.

Amy Werner, an art teacher at Logansport High School who graduated with Leeman, organized the exhibit.

"We're just really excited to be able to have the kids be able to see a professional artist who is an alumni of Logansport High School," Werner said. "One of our goals when creating the gallery was to give our kids exposure to professional art because many of them will never either take the opportunity or get the chance to go to a larger city and see professional artwork hung in a professional setting."

The exhibit is made up of paintings and pieces on wood created with a blowtorch. Several of Leeman's San Francisco neighbors have become the subjects of his work over the years, which can be seen in the gallery depicted not only on canvases, but street signs as well.

Werner said she got the pieces from Leeman's family in town.

Leeman said they're works he's given family members over the years. He's looking forward to seeing what will be on display, adding he expects it will be like "opening an old diary or walking into the room you grew up in..."

Leeman said he's experimented with several styles and materials over the years, including portraits, drawings, charcoal, oil paints and using rust-creating chemicals to create a design on a metal canvas. For a while he was taking thumbnails of politicians and blowing them up until they were unrecognizable before painting on them in a way that returned their likenesses.

He recalled buying books on a step-by-step method for drawing portraits while teaching English in China as a way to cope with the culture shock and isolation he experienced there.

The public is invited to an opening reception and viewing from 5:30 to 7 p.m. Wednesday, Aug. 26, at the gallery in Logansport High School, 1 Berry Lane.

Leeman praised the school's decision to create a gallery, which opened last spring. Even if students don't plan on pursuing art as a career, he said the lessons that come with it are beneficial for any vocation.

"It'snot about teaching you how to be a sculptor or a writer or a dancer or a painter," he said, "it's teaching you about creativity and how to tap into that."

Leeman is planning to visit the school in mid September.

He's looking forward to returning to his hometown, something he said he didn't always think he'd want to do. Absence and time have allowed him to realize how many of the things he formerly rebelled against have influenced him, he said.

"To have the opportunity to come back and give back and to still be connected, it's really powerful and important to me and above all it's very humbling," he said. "I really appreciate having grown up there and everything that's come to be formative for me."

Werner said visitors are welcome to visit the gallery after the opening of Leeman's exhibit, but are encouraged to call ahead. The school can be reached at 574-753-0441.

WHAT: Reception for Hugh Leeman exhibition

Patricia Ann "Pat" Braun, 75, of Chicago Heights (formerly Winamac) died Friday, March 23, 2020 She was a lifelong member of St. Peter's Catholic Church in Winamac. Although she was afflicted with epilepsy in her youth, she proudly graduated from the 8th grade from St. Peter's Catholic Schoo…