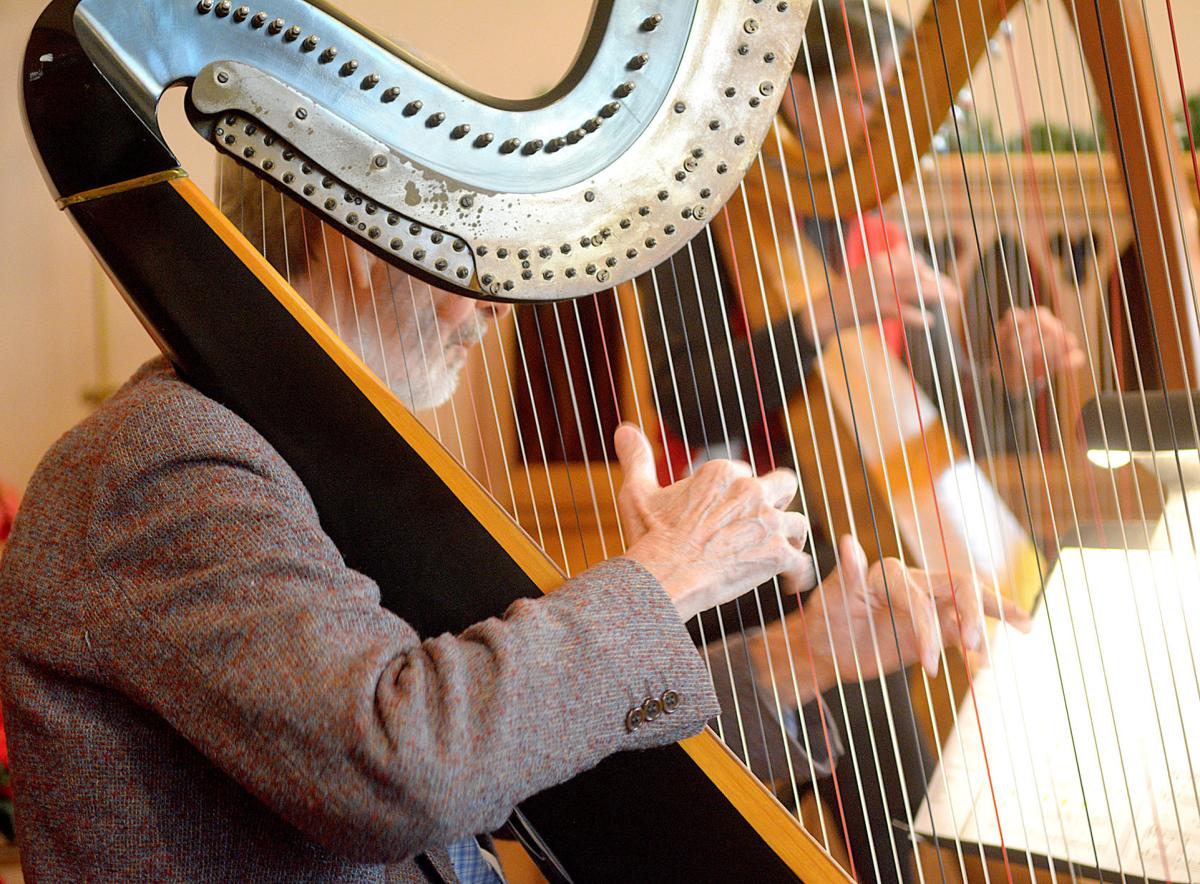 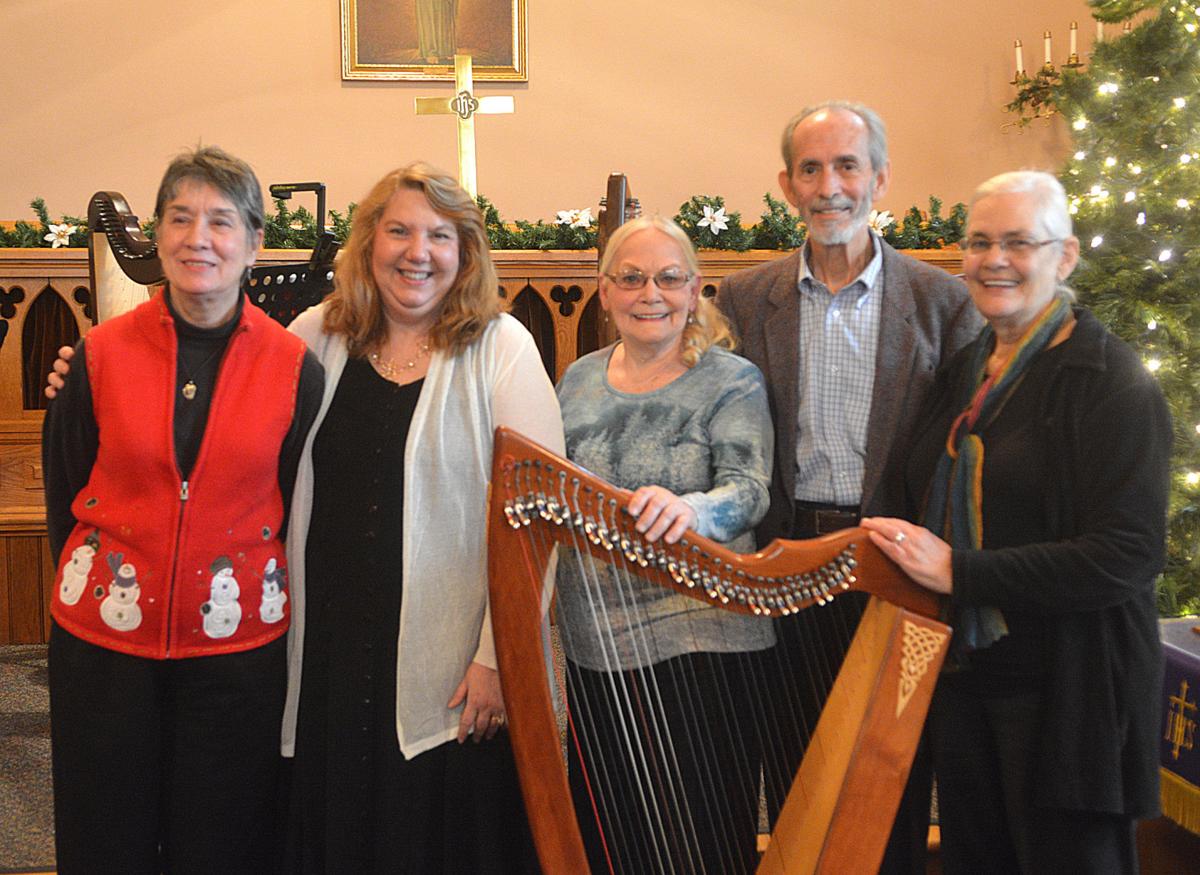 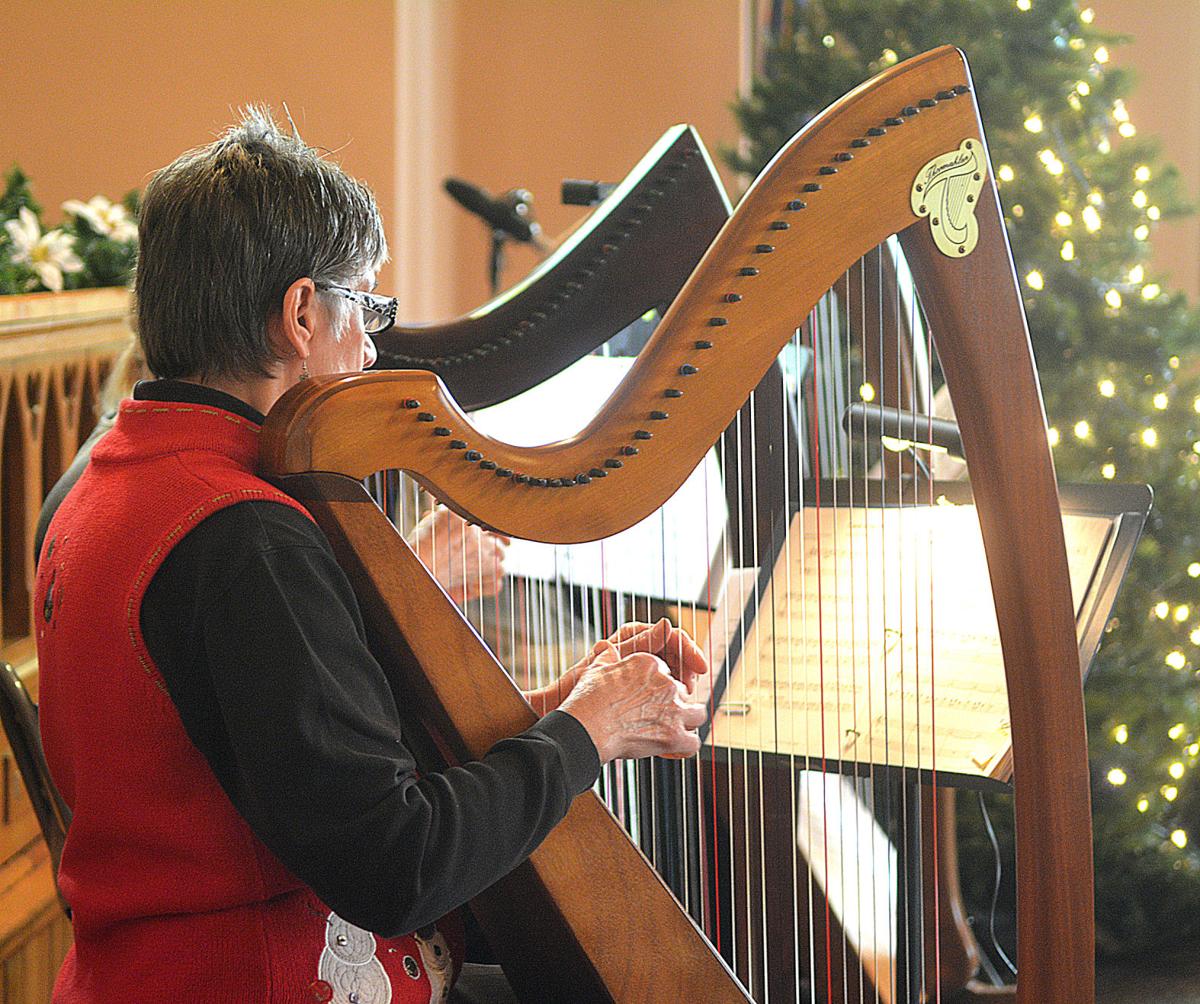 Martha Klemm from Frankfort plays harp during a performance of Christmas songs at Bethlehem Presbyterian Church on Sunday. 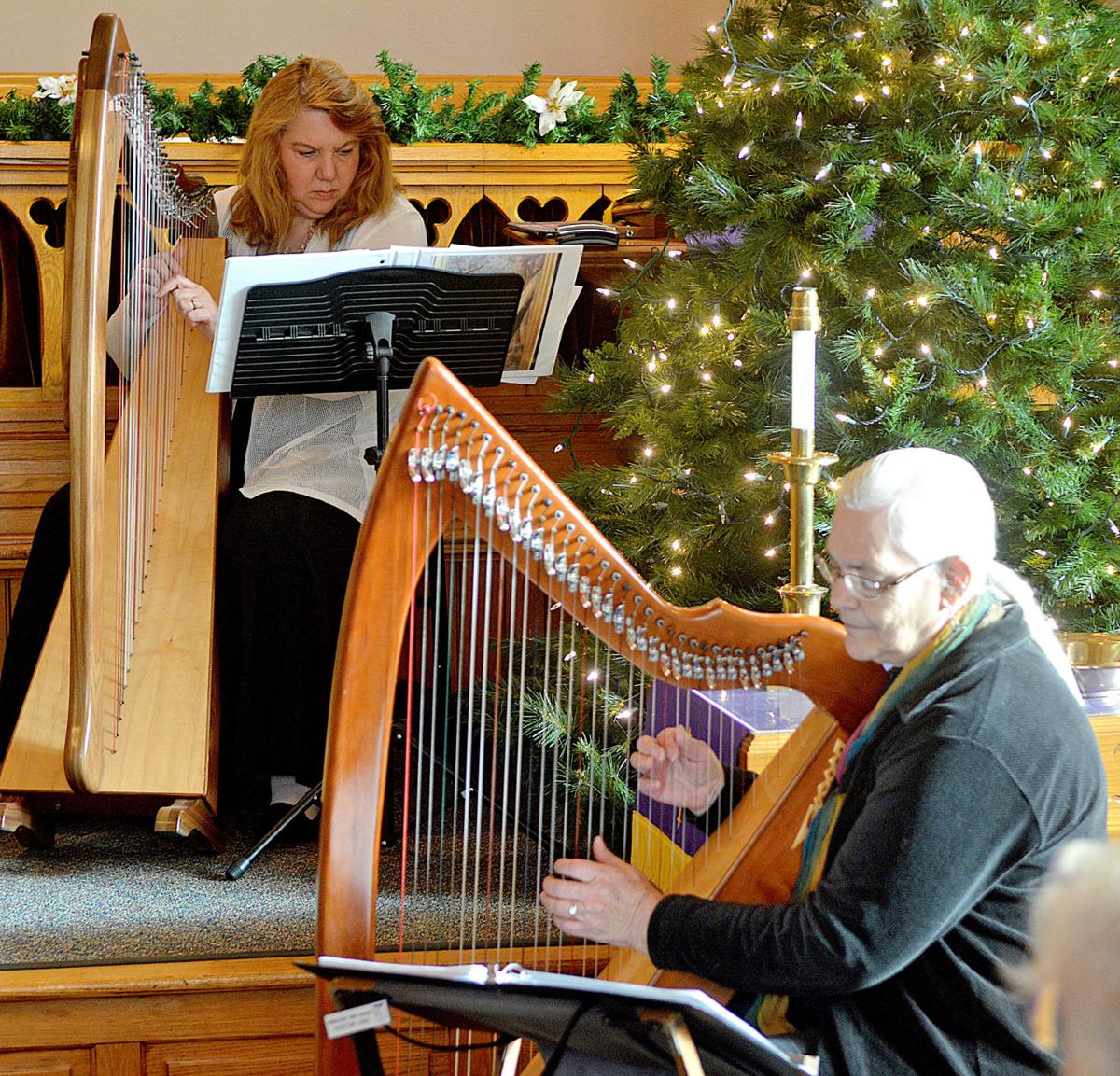 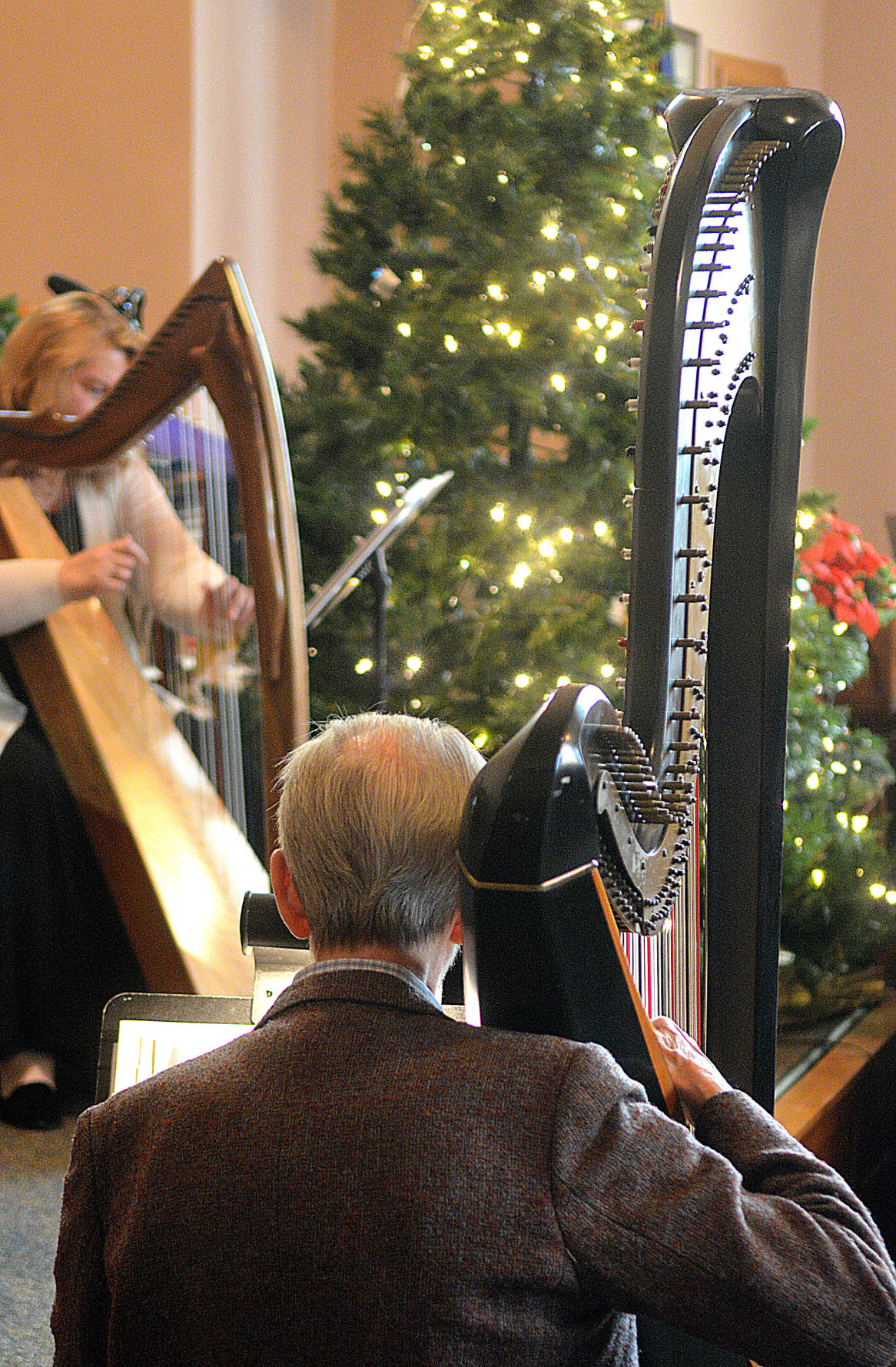 Martha Klemm from Frankfort plays harp during a performance of Christmas songs at Bethlehem Presbyterian Church on Sunday.

The Christmas concert, Harps at Christmas, is a thank you to the church for the use of their facilities for workshops. The Hoosier Harp Circle has had a number of workshops with guest harpists in previous years, which have included Tiffany Schaeffer, a harpist from Ohio, Celtic harpist Laurie Riley and Paraguayan harpist Nicolas Carter.

This is the third year that Hoosier Harp Circle has performed Christmas ensembles for the church.

“It’s just really nice to get more than one harp together. It’s not something that you get that many opportunities to do so it’s fun to play in ensemble pieces,” said Sara Walthery, who was one of the two harpists from Logansport who performed.

Walthery has a Christmas album in the works and she hopes that it will be out by Christmas. “I’ve been out at [Dave Osenbaugh’s Mixit Recording in Galveston] recording. We’ve got all the tracks down and now we’re going to be producing it — sometime in the next couple weeks it should be out. I cross my fingers when I say that, because it’s a Christmas album. It’s a Christmas CD — me and the harp.”

The title is “To Drive the Cold Winter Away,” which is an English Christmas carol. Some of the tracks will include “Hark the Harold Angels Sing,” “God Rest Ye Merry Gentleman” and “Silent Night.”

“Some of them are pretty standard and some of them are kind of jazzy,” said Walthery. “I can play heavy metal on the harp and it can still be peaceful.”

The ensemble also included Julia Jones, who is also from Logansport, Cynthia Boener of Argos, Jay Miller of Kokomo and Martha Klemm of Frankfort.

The ensemble ended the show with an original arrangement of “Silent Night.” The audience was asked to remain quiet during the first two verses of the song so they could hear the melodies, but welcomed them to sing the last two verses.

Free-will donations were collected at the church and went to Caston Helping Hands.

Brantley William Pugh was born Jan. 20, 2021, in Indianapolis, and died 84 minutes later in the loving arms of his parents, Cody and Heidi (Martin) Pugh. Services will be at 3 p.m. Saturday, Jan. 30, in Fisher Funeral Chapel, with visitation from 2 to 3 p.m. Read Brantley's obituary at www.f…

Anspach, John, visitation hours will be from 4 p.m. to 6 p.m. on Saturday, Jan. 23, 2021, at the Vineyard Community Church of Logansport, located at 715 East Broadway. A celebration of life will be held at a later date.