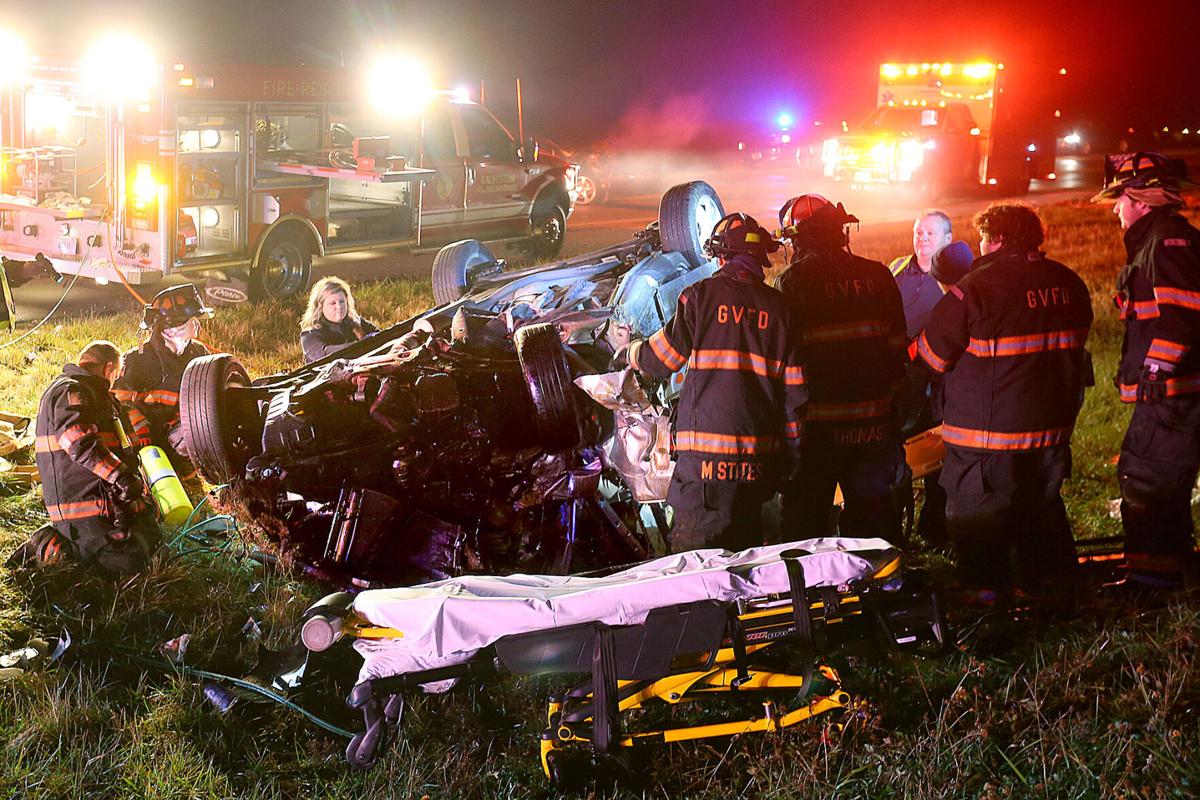 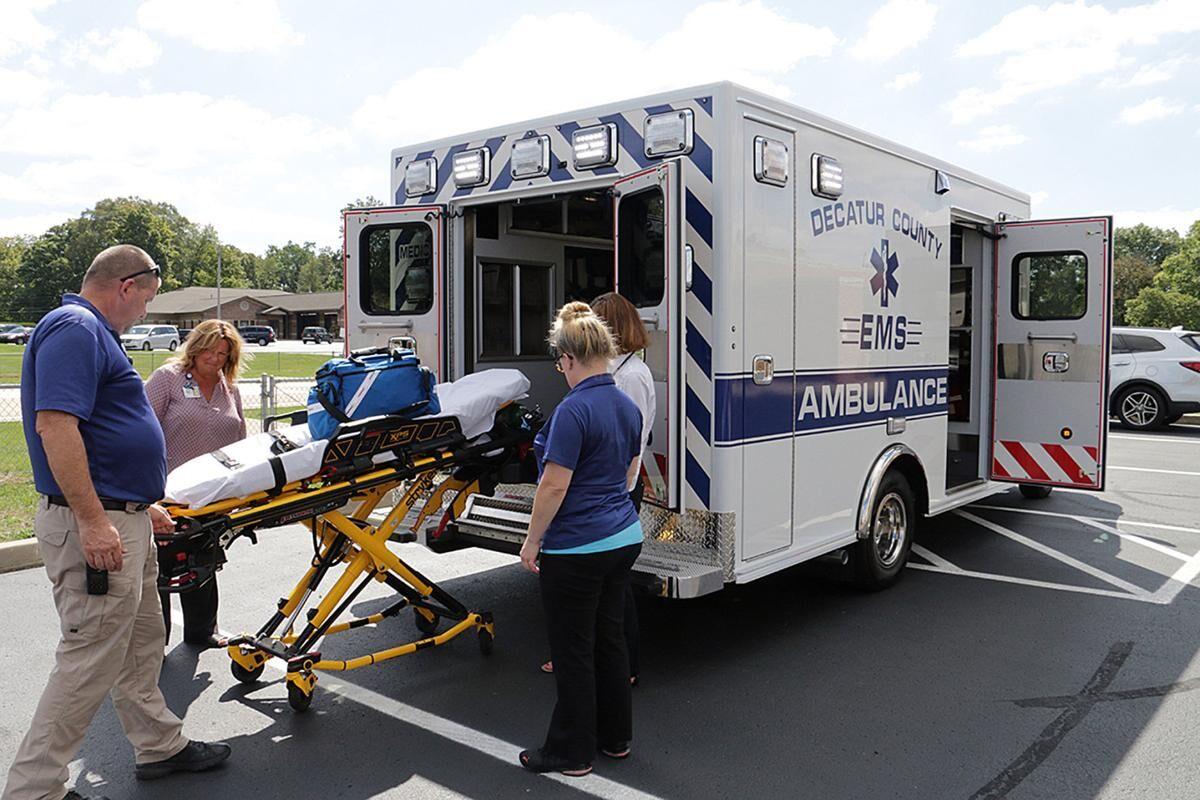 EMTs and others look over an ambulance in Rushville, Indiana. The small, rural community is suffering a severe shortage of EMTs.

About 30 times a month, patients come to the emergency room at Rush Memorial Hospital and end up waiting – and waiting, and waiting – sometimes up to 20 hours.

That’s because those patients require medical treatment that the hospital, located in the small, rural town of Rushville, can’t provide, and need an ambulance transport to a larger facility that offers higher levels of care.

Rushville is a community of 6,000 people located about 50 miles southeast of Indianapolis.

The problem is that more often than not, there’s no qualified paramedic available to do the transfer. That leaves the hospital scrambling to convince out-of-town ambulance services to drive sometimes up to an hour to come and pick up their patients for transport.

Carrie Tressler, the hospital’s vice president of nursing who oversees its emergency services, said they’ve been trying to hire a paramedic for two years to do the ambulance transfers, but they’ve not had one person apply for the job.

“We’ve been fighting that battle of figuring out how to get our patients to higher levels of care without a paramedic,” she said. “But we’re kind of in a pickle. When we say, ‘Hey, come to our facility and do transfers in a rural community,’ that’s not appealing to paramedics.”

Rush Memorial Hospital isn’t alone. Across the state, the number of paramedics and emergency physicians in rural communities is rapidly shrinking, leaving emergency medical services scrambling to fully staff their ambulances for 911 calls or hospital transfers.

And it’s in rural areas where paramedics are needed the most.

State EMS Director Kraig Kinney said ambulances in rural parts of the state have to drive further to reach a hospital, and that means patients require more intensive care for longer periods inside an ambulance. Paramedics are the only ones qualified to perform more complex procedures such as inserting IV lines, administering drugs and applying pacemakers.

“Those rural areas are the places that really need the paramedics, but it’s a challenge to come up with enough,” Kinney said.

In fact, some counties in southern Indiana don’t have any paramedics, according to Sara Brown, an EMS representative on both the national and state board of the American College of Emergency Physicians.

Brown also practices emergency medicine for Parkview Health in six rural counties, including Wabash, Huntington, Noble and LaGrange counties. She estimated that region alone needs up to 20 more paramedics or other emergency personnel to be fully staffed.

The problem is only set to get worse, according to the “National Study of the Emergency Physician Workforce, 2020.” The study says of the 48,835 clinically active emergency physicians in the U.S, just 8% are practicing in rural communities. That’s down from 10% in 2008.

So how did Indiana end up with a rapidly evaporating pool of paramedics serving rural parts of the state? Like many issues, the problem boils down mostly to money.

‘THERE ARE NO PROFITS’

State EMS Director Kinney said funding EMS services is complicated, but at its core, the reason there are fewer paramedics in rural areas is simple: They don’t make enough money.

He said on average, paramedics working in smaller communities or in rural counties earn on average between $35,000 to $45,000. But head to an EMS service in a larger city, and paramedics could pull in salaries as high as $70,000.

Parkview’s Brown said her rural EMS service not only can’t compete with emergency providers in larger cities – they can hardly compete with salaries paid at some retail stores or fast-food restaurants.

“Absolutely, the pay is low,” she said. “It’s a huge issue. We see people leaving the EMS workforce to go to factory jobs or Walmart or even to flip hamburgers, because they either make the equivalent or, in some cases, more in those jobs.”

Kinney said the problem is that for most rural EMS providers, they simply can’t afford to pay paramedics well because they barely bring in enough money to stay open. And the main reason for that comes down to how ambulance services are reimbursed by insurance.

Right now, insurance is only required to reimburse EMS services if they actually transport a patient to a hospital. That means if paramedics arrive on scene, treat the patient at home, but don’t actually take them to a medical facility, they don’t get paid.

“We do treatments. We use medications. We make them better,” Kinney said. “Then we talk to a doctor and they say they don’t need to come in. Right now, it’s very challenging to get paid for those runs.”

State EMS Medical Director Michael Kaufmann said on average, EMS agencies perform more than 10,000 runs each year where a patient refuses transport to the hospital, leaving the provider to eat the cost of the trip.

And even when ambulances do make a transport, Kinney said, EMS services are still getting only small reimbursements from the two largest insurers that cover patients – Medicare and Medicaid, which on average cover over half of the patients who call 911.

He said both government insurance providers don’t even reimburse enough to cover the costs of making an emergency ambulance run, leading EMS services to hemorrhage huge amounts of money for providing what the state considers an essential service.

Add it all up, and most rural EMS providers can barely keep the ambulance doors open for 911 calls or inter-hospital transfers, let alone paying paramedics a competitive salary, said Rush Memorial Hospital’s Tressler.

“You can spend half a million dollars a year to keep up a transfer service and insurance is only going to pay a fraction of the cost,” she said. “No ambulance service would be able to sustain that for long.”

That’s also led to a shrinking number of ambulances around the state. According to the Indiana Department of Homeland Security, which oversees the state’s EMS department, the number of ambulances on the road has shrunk by over 12%, dropping from 2,022 to 1,773. The timeframe on that decline is unclear.

In larger urban areas, EMS services often have access to more revenue through tax levies put in place specifically to fund emergency medical services. Some rural counties and towns also have those tax levies, but the populations are so small that they don’t generate substantial amounts of revenue.

Kinney said the final outcome is that hardly any rural EMS provider has enough money on hand to offer paramedics a competitive wage, leading to a constant uphill battle to recruit them to small communities that need their services the most.

“There are no profits, so you’re struggling to come up with money,” he said. “It’s not that businesses are being greedy and refusing to pay fair amounts to paramedics. It’s the fact that the reimbursement is so low that there just isn’t a revenue stream.”

But change is coming soon.

This year, Indiana lawmakers passed House Bill 1209, which paves the way for EMS providers to start billing insurance for actual medical services they provide on-scene rather than only if a transport to a hospital is made.

Kinney said the bill opens up a new and vital revenue stream for EMS providers by extending reimbursement to certain situations where advanced life-support procedures are performed in the field, but there is no ambulance transport.

“In reality, we’re saving patients a hospital bill, and bunch of other billable items, so shouldn’t there be some reimbursement for that?” he said.

The state EMS department is currently negotiating with Indiana Family and Social Services Association, which administers Medicaid and Medicare in the state, to determine how much they will reimburse for certain medical procedures.

Kinney said the new bill is an important step forward to start sufficiently funding rural EMS services, but it won’t solve the financial crunch many providers face. With Medicaid and Medicare still not reimbursing agencies enough to even cover the cost of an ambulance transfer, many will still struggle to make ends meet.

“It’s a start, but it’s just the tip of the iceberg,” he said. “It’s very positive, and we welcomed and supported it, but obviously we still need to do more.”

If more isn’t done, rural EMS agencies will continue to lose paramedics, leaving patients with less care when they call 911 during a medical emergency.

Parkview’s Brown said her EMS department is the perfect example of on-the-ground consequences of the shortage. Five years ago, she said, every one of their ambulances had a paramedic on board. Today, only 75% do.

“If we don’t make some significant changes, I think this will continue to get worse,” Brown said. “It’s definitely worse today than it was a year ago. We’ve not turned any corners or made any headway at this point.”