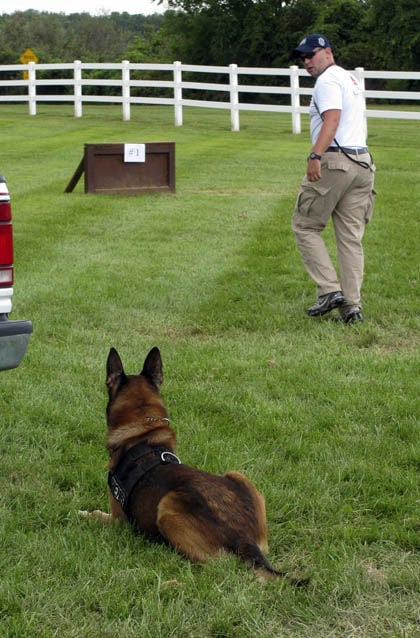 READY TO GO: Sgt. Pat Zeider of the Cass County Sheriff’s Department instructs his K9, Rohan, to wait until he offers the signal to search a trailer during the control sequence of the 11th annual seminar and certification trials in Miami County Tuesday. The seminar is hosted by Vohne Liche Kennels and American Working Dog. 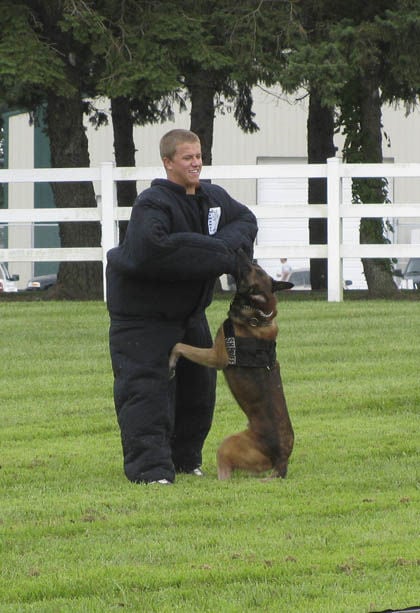 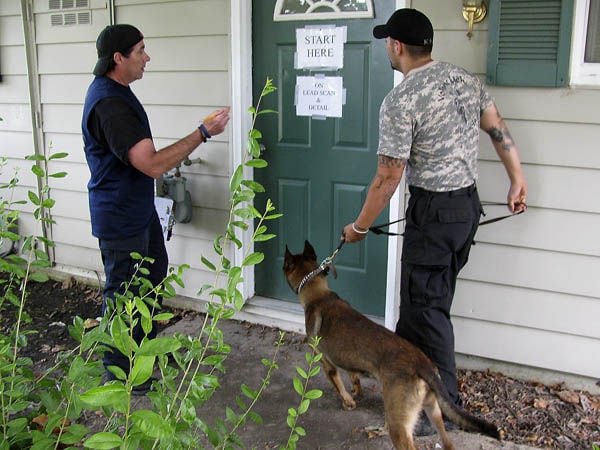 HOUSE SEARCH: Indianapolis police officer Gary Hadden, left, discusses several rules with Logansport officer Travis Yike, right, during a detection exercise in search for narcotics and explosives at Eagles Pointe in Miami County. Yike’s K-9, Hodo, is ready to begin the search. The two are participating in the 11th annual seminar and certification trials this week.

READY TO GO: Sgt. Pat Zeider of the Cass County Sheriff’s Department instructs his K9, Rohan, to wait until he offers the signal to search a trailer during the control sequence of the 11th annual seminar and certification trials in Miami County Tuesday. The seminar is hosted by Vohne Liche Kennels and American Working Dog.

HOUSE SEARCH: Indianapolis police officer Gary Hadden, left, discusses several rules with Logansport officer Travis Yike, right, during a detection exercise in search for narcotics and explosives at Eagles Pointe in Miami County. Yike’s K-9, Hodo, is ready to begin the search. The two are participating in the 11th annual seminar and certification trials this week.

Police dogs from across the country and around the world on Tuesday began a four-day competition searching for suspects, narcotics and explosives.

“People look for it year round,” said Ken Licklider, owner of Vohne Licke Kennels and an event coordinator. “It covers a full spectrum of what they deal with out in the field, but we throw in a twist.”

In all, 102 teams are participating in the competition, which began Tuesday and will last through Friday.

Licklider said the program started because organizers wanted to provide something for the working dog. The event continues each year so the handlers and their K-9 partners can expand their knowledge and experience.

“We want to give them an opportunity to practice their skills,”

Licklider said. “It’s a chance for them to train, a chance to work some more and a chance to say ‘Way to go.’”

Lisa Webb, another event coordinator, called the competition a great way to help the handlers from different departments to build bonds and network.

It was the third time in the competition for Cass County Sheriff’s Sgt.

Pat Zeider and his K-9, Rohan.

“It’s an awesome deal, just the knowledge we get from the trainers,”

he said. “The judges pass the knowledge on. We’re just here to compete and have a good time.”

In addition to receiving pointers from the judges and trainers, it’s also a good opportunity to speak with other handlers, who come from police departments, military and even the government.

Participation in the competition also goes toward the necessary annual re-certification.

According to Zeider, the experience is not only beneficial to the dog, but to the handler.

“It’s good, especially to see the things we need to work on,” he said.

His favorite event is the area search for a person, simply because it is Rohan’s strongest area.

Logansport officer Travis Yike and his K-9, Hodo, attended the competition for the first time. Yike and Hodo just graduated from the training school in October. The competition was a good opportunity for the two to see what progress they’ve made.

“It’s very valuable any time you can get around other handlers and learn from them,” Yike said.

During the pair’s normal training, Yike said, they set up similar scenarios. He believes the training will help him during the competition this week.

“I have to just go in and trust the dog and do what we normally do on the street,” he said.

The only difference is that several of the events are timed, which adds to the stress of the situation. Yike said he simply remains focused and pushes the time limit out of his mind.

Webb was pleased with the higher number of turnout this year. All told, she said, this was the highest number of competitors since the event first began. She added there were more people from Indiana participating this year than in the past.

“It all just depends on the manpower for the department and if they can send someone or not,” she said.

Four days of intense competition allows an opportunity for the civilian community to witness law enforcement K-9 teams in a variety of events.

The exercises are set up at 10 locations in Macy, Denver and Peru.

“It’s a nice variety for these handlers to do what they need to do,”

About 40 judges from as far away as St. Croix, Turkey and South Africa, score each team based on tactics and completion of the task.

Events will take place from 8 a.m. to 4 p.m. today and Thursday.

Events will start at 8 a.m. on Friday and last throughout the morning, with the hard dog/fast dog competition at 11 a.m. and a banquet and awards ceremony at 3 p.m. at the Vohne Liche Kennels Lake.

New events this year include a hotel scenario for detective dogs and an alley scenario for patrol dogs. The organizers try to make each event as realistic as possible.

The public is encouraged to stop by and see what the working dogs are required to learn and what their duties are. The main area for the event is located at the Vohne Liche Kennels, 7953 N. Old Route 31, Denver. Programs with maps and site information are available at the main tent. Food vendors are also available.

Licklider said he encouraged and sought out dog handlers with K-9s not trained at his facility.

• Denise Massie is a staff writer at the Pharos-Tribune. She can be reached at 574-732-5151 or denise.massie@pharostribune.com

Baker, Patricia A., 79 of Logansport, a celebration of life will be held at 1:30 p.m. on Monday, November 2, at Gundrum Funeral Home & Crematory with Bob Pifer officiating. Burial will follow at McNeely Cemetery, near Lewisburg. Visitation will be held from 1:00 to 4:00 p.m. on Sunday, N…

Maxine M. King, 93, of Logansport passed away on Sunday, October 25, 2020 at Miller's Merry Manor in Logansport. Born on August 7, 1927 in Logansport, she was the daughter of the late Romeo and Gertrude (Klein) Firmani. She was a 1945 Logansport High School graduate. Maxine retired in 1992 f…