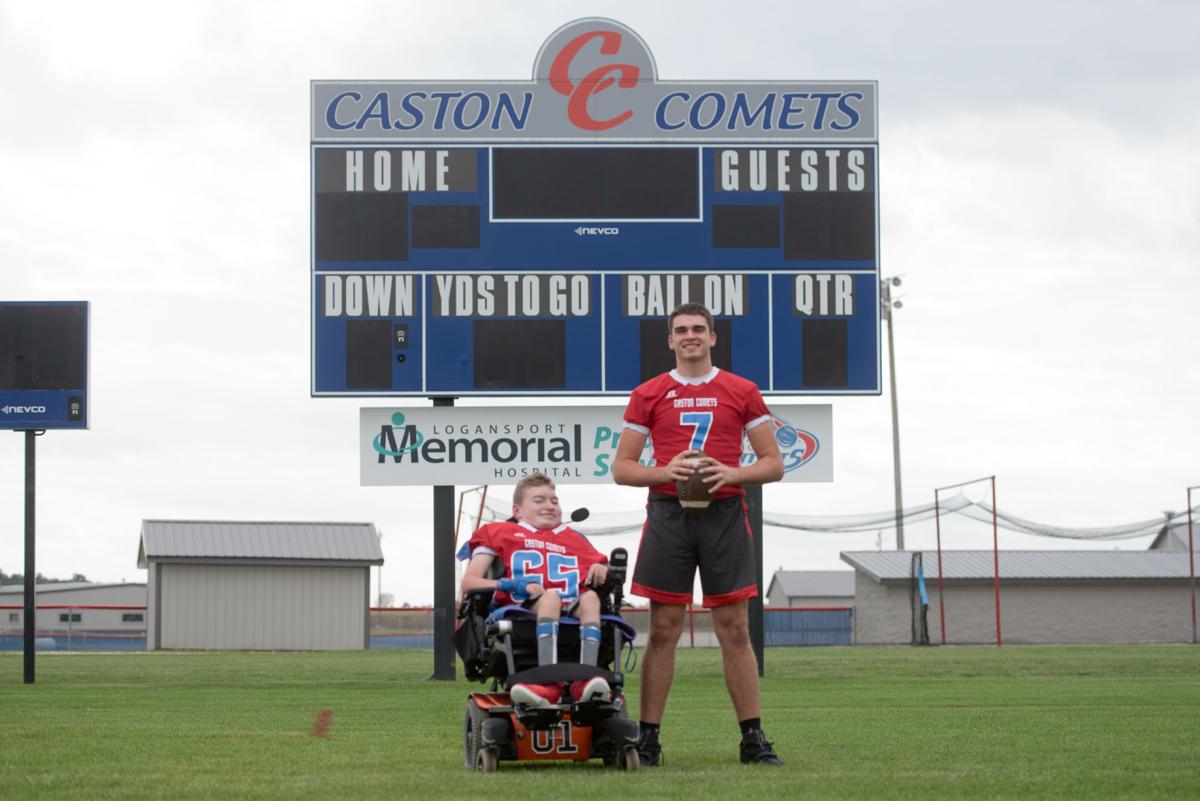 Hunter Shaffer (left) and Hunter Schanlaub pose for a photo at the Caston Comets football field on Wednesday afternoon. 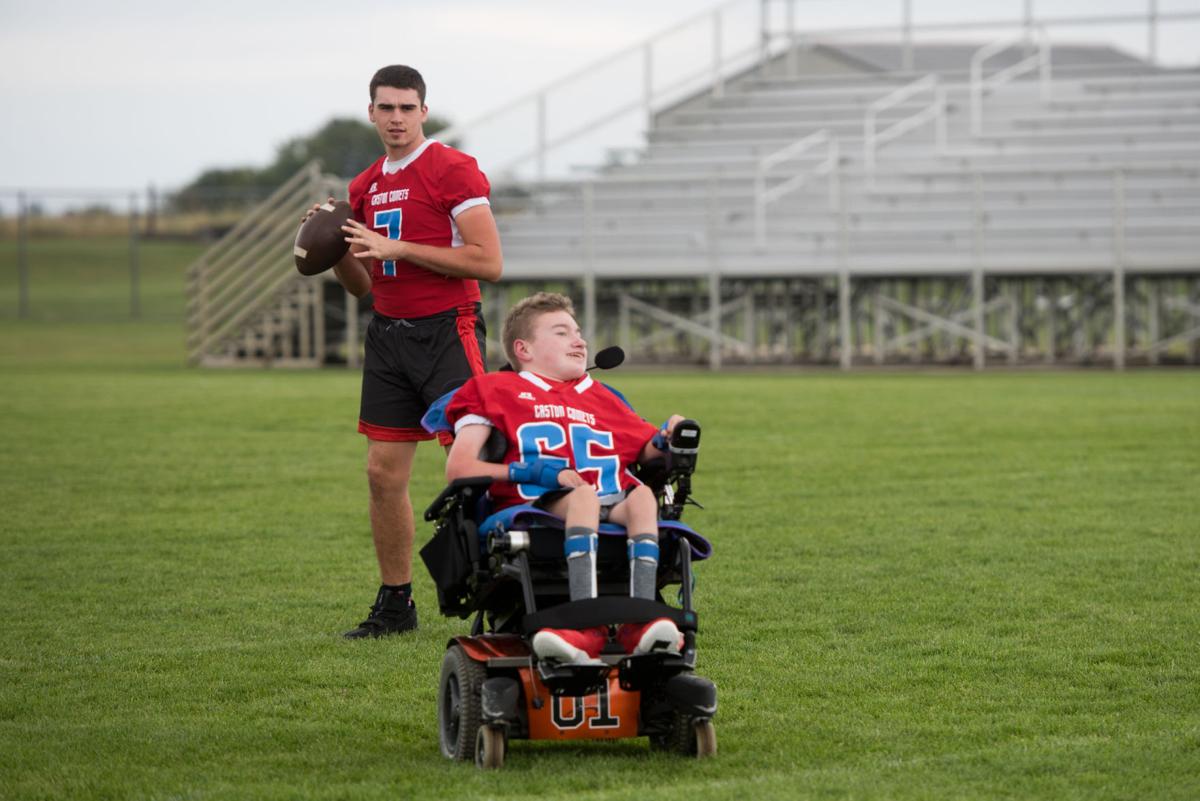 Hunter Shaffer goes out for a pass from Hunter Schanlaub. Tony Walters | Pharos-Tribune 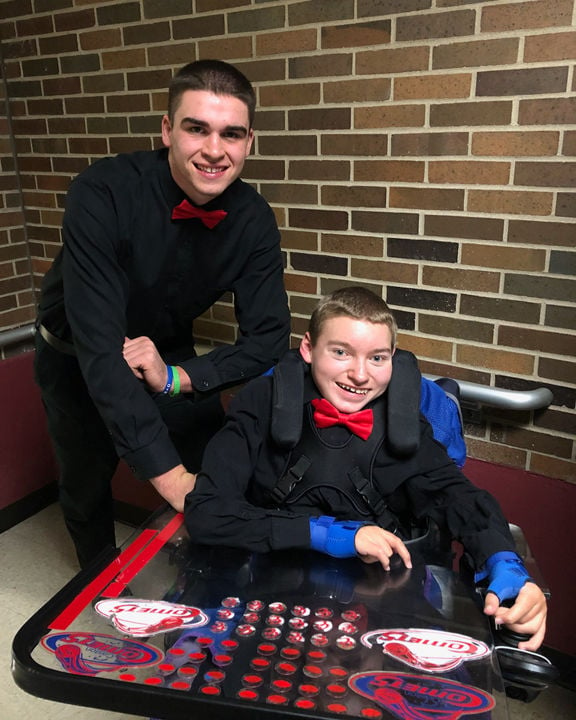 Hunter Schanlaub (left) and Hunter Shaffer attend the Caston Christmas concert in December 2018. They both play percussion for the school band. 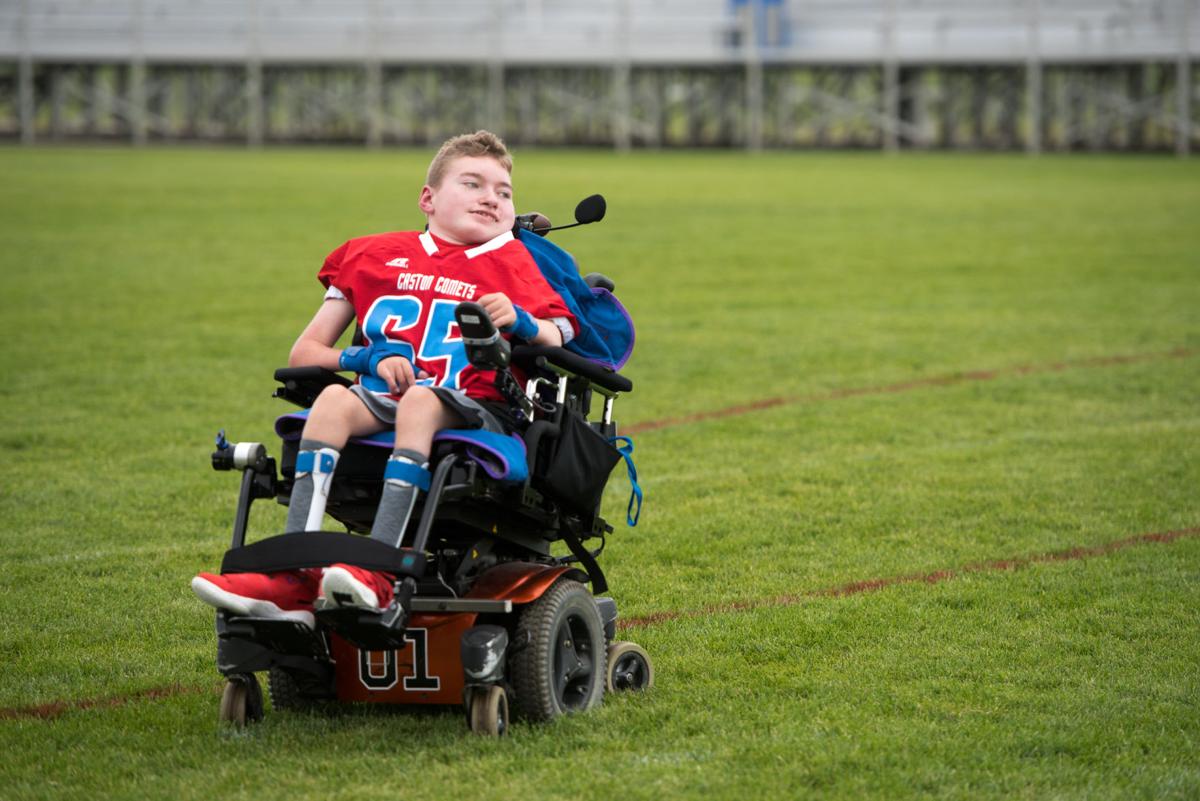 Hunter Shaffer (left) and Hunter Schanlaub pose for a photo at the Caston Comets football field on Wednesday afternoon.

Hunter Shaffer goes out for a pass from Hunter Schanlaub. Tony Walters | Pharos-Tribune

Hunter Schanlaub (left) and Hunter Shaffer attend the Caston Christmas concert in December 2018. They both play percussion for the school band.

In many ways, Hunter Schanlaub and Hunter Shaffer are typical best friends, as far as teenage boys go.

They like girls, cars, sports and hanging out with each other.

But they have a unique bond. Hunter Schanlaub is 6-foot-5, 225 pounds and is the best athlete in the school. While Hunter Shaffer was born with cerebral palsy and is wheelchair-bound.

They first became friends when Schanlaub was a seventh grader and they happened to have the same first name. Shaffer is now the one more likely to go by Hunter, while Schanlaub often goes by “Hunter D.,” because his middle name is Douglas, to differentiate the two.

It didn’t take too long for the boys to befriend each other. Early on, their friendship included a school trip to Washington, D.C. on a junior high school trip, Shaffer’s mother, Larina Shaffer, recalled.

“It was funny because I went with them and we were getting on the buses and strapping Hunter in and this kid over here, Hunter Douglas, wants to learn how to do this,” Larina said. “I’m like, OK, I don’t know who you are. And there were other times, I remember we were at Arlington Cemetery, and he was like, ‘Hey, let’s go this way Hunter.’ And I was like, now what do I do without Hunter? Oh wait, I enjoy myself. It was different. So he’s been a real blessing. If he doesn’t know something, he asks questions. He’s been great.”

Some good things were happening to Shaffer around that time. Not only did he gain a lifelong friend, he also began to be able to communicate.

It was about six years ago when he started using his first eye-gaze device. He is now able to communicate well with the help of the device, which is attached to his wheelchair. Although, like his mother said, sometimes he tends to prefer to type things out instead of using his computer shortcuts.

“Which I think will help him later in life,” Larina added.

In preparation for his interview this week, Shaffer prepared for some Pharos-Tribune Athlete of the Week-type questions.

Shaffer and Schanlaub are both big Alabama football fans. But Shaffer’s favorite NFL team is the Indianapolis Colts, while Schanlaub’s is the Detroit Lions.

Shaffer’s favorite player used to be Andrew Luck, but after his retirement it is now TY Hilton. His favorite NASCAR driver is Chase Elliott, who just won last Sunday at Charlotte.

Shaffer had a rhyme for the New England Patriots: “yuck” and “suck.”

His future plans are to follow Hunter D. to wherever he plays college football. He also would like to someday wear No. 90 for the New York Giants.

Schanlaub said that Shaffer has some impressive measurables in his souped-up wheelchair, as he said that he’s 6-foot-9, 435 pounds and runs a 4.4 40-yard dash.

Shaffer is set to score a touchdown before Friday’s homecoming game against Culver, so fans will surely want to be there early for the 7 p.m. kickoff.

Schanlaub is set to catch the kickoff and hand the ball off to Shaffer, who plans to return the kickoff for a score.

“He’s told me that Sam DuVall will block for me and that Sam’s got his back. And he wants to go up the middle,” Schanlaub said.

Though he normally doesn’t like to drive fast, Shaffer said he might turn his wheelchair all the way up to a maximum four for the touchdown run.

The Facebook video that announced that he’s scoring a touchdown had already reached over 3,500 views on Wednesday.

Shaffer will wear his No. 65, which was Schanlaub’s number when he was an offensive lineman earlier in his career.

Schanlaub is a big reason Shaffer decided to take a “redshirt” and graduate with a certificate as a super senior with him this year, as he was originally set to graduate last year.

The Caston football team has struggled with low numbers in recent years, but Schanlaub’s play has been a bright spot. He’s looking to play at the next level, likely at tight end or defensive end.

“I was at Franklin College the weekend after the Pioneer game, so about two weeks ago now. It was a great visit,” Schanlaub said. “I’m looking forward to going back down there again. I’m going to schedule a couple other small Division-III schools, D-II schools. Before the end of the first nine weeks of school I’ll have at least two more to go to.”

By necessity, Schanlaub has moved from offensive tackle to quarterback to now wide receiver for the Comets.

“Playing with 15, 16 kids my whole career has been different,” he said.

The Comets have been in a situation where they barely have enough players to fill a squad while at the same time going up against some of the best small-school football programs in the state.

“It’s definitely just a different level of determination and grit to play at Knox, LaVille, Pioneer. Our schedule is tough and with 15 kids is something different,” Schanlaub said. “I couldn’t tell you the last time I came off the field for just a regular substitution. But the coaching staff has been great helping me take my game to the next level. But at the same time they’ve allowed me to help coach up the younger kids that the freshman, sophomore class that has the ability to be good. They’ve allowed me to help them grow. I think that’s pretty big too. At bigger schools you don’t see that as much as here. And you have more 1 on 1 time with coaches too, so that’s great. It really helps you take your skill development to the next level.”

Shaffer is a captain of the football team and he also hands out the game ball before every Caston boys basketball game. So not only is he a big fan, he’s also a part of the team.

Shaffer has helped Schanlaub gain some friends in high places. In fact they’ve met Andrew Luck together and Schanlaub has gotten to play catch with Jacoby Brissett.

At the same time, if Shaffer gets a bit unruly at times for his mother or Schanlaub’s mother, Samantha Schanlaub, who helps Shaffer navigate his school day as a Caston paraprofessional aid, all they have to do is mention he can hang out with Hunter D. and he’ll start shaping up.

But Shaffer certainly knows right from wrong. In fact, he often enforces it.

“He’s very bossy. He knows right from wrong too and he’ll apologize when he’s done something or when he’s upset he’ll tell you,” Samantha said.

“They support each other through everything that they’re involved in.”