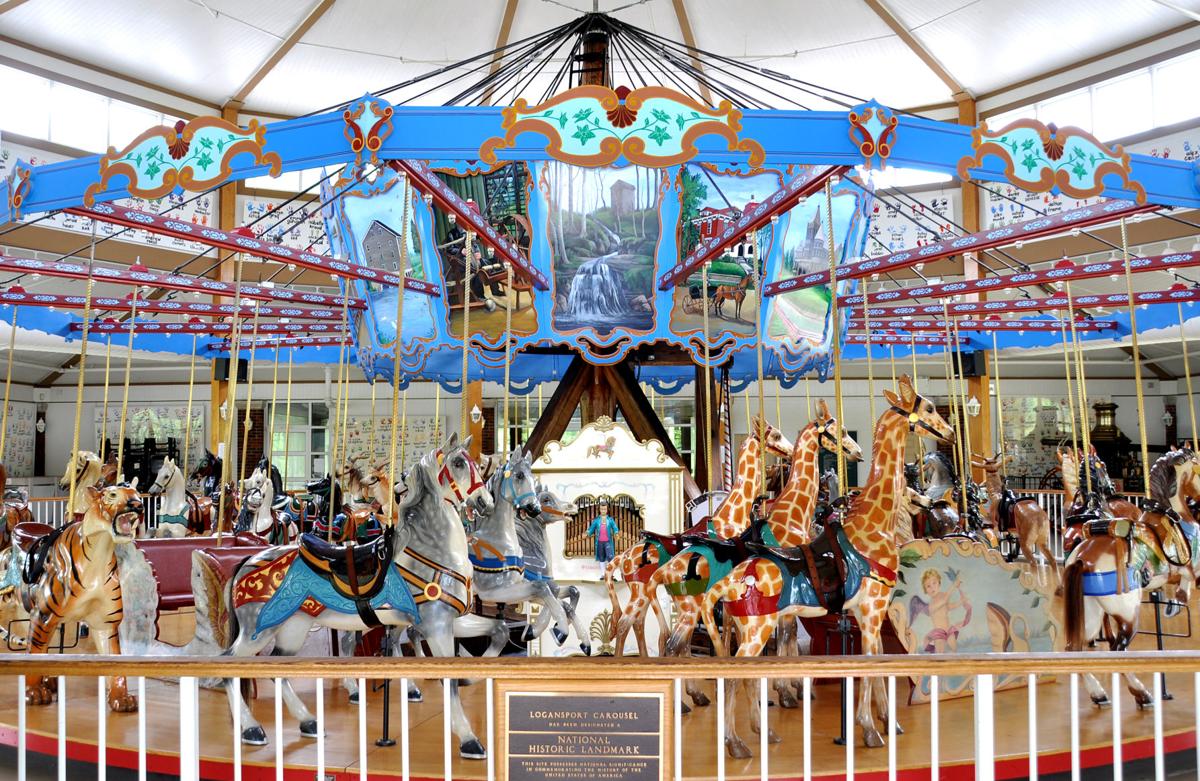 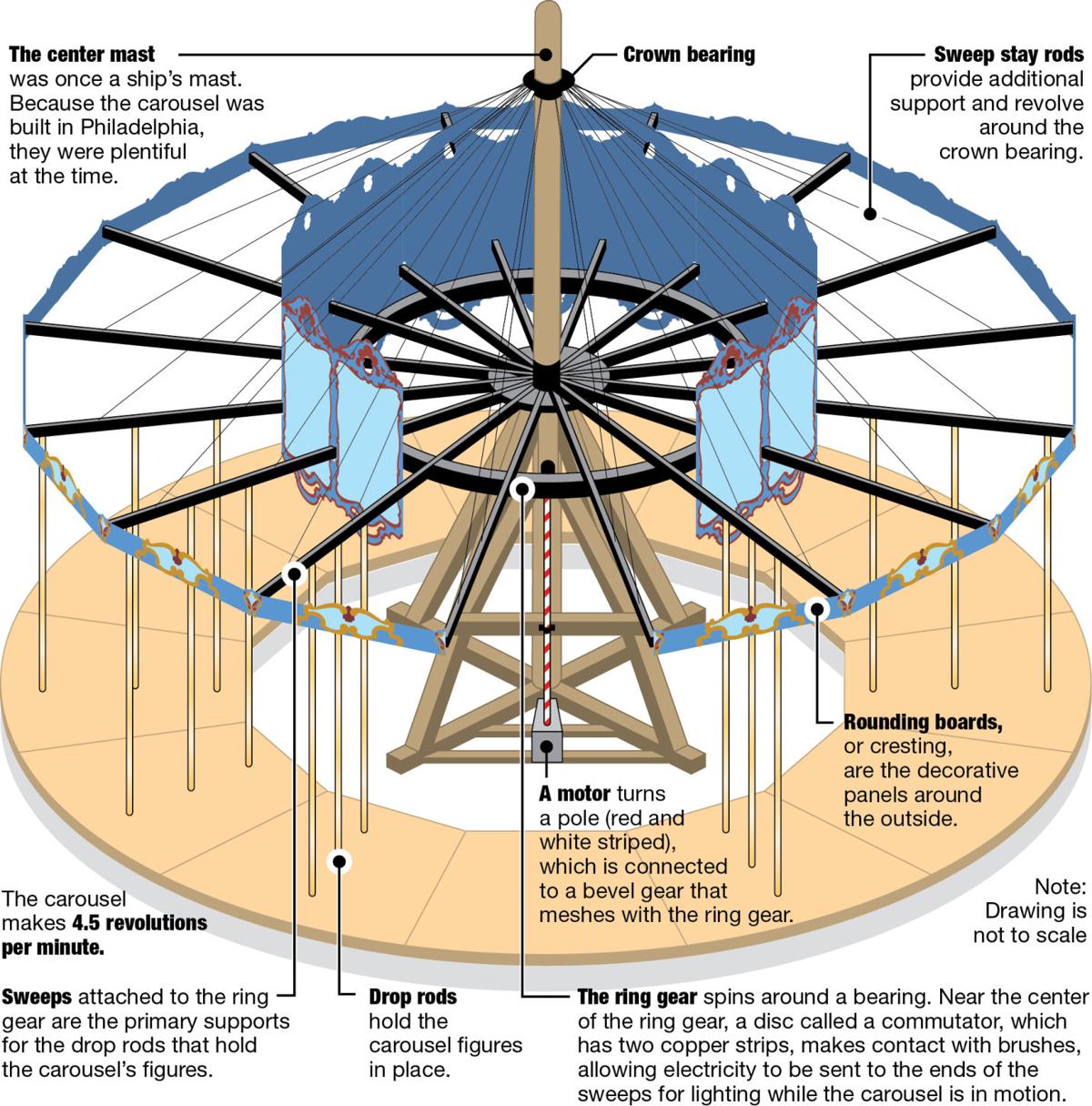 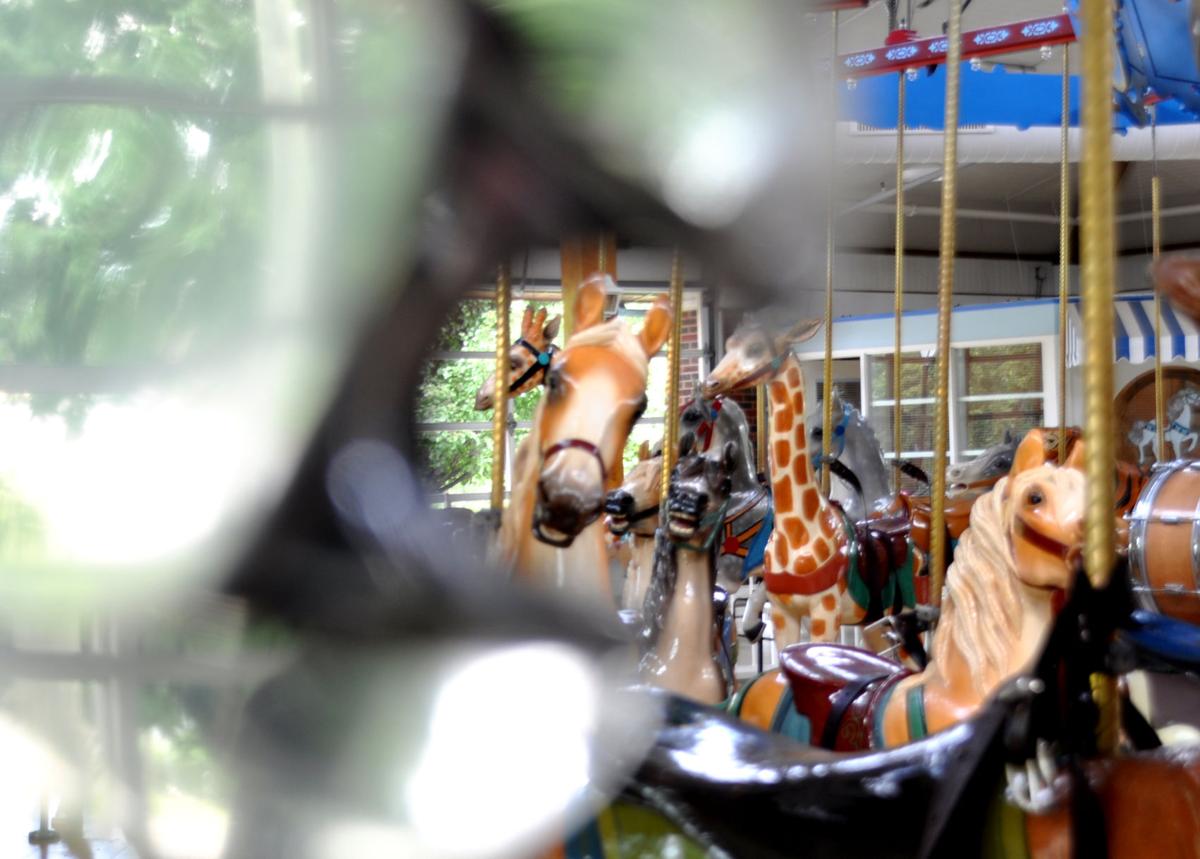 Carousel figures are seen through the end of the ring chute, where riders try to grab the prized brass ring. 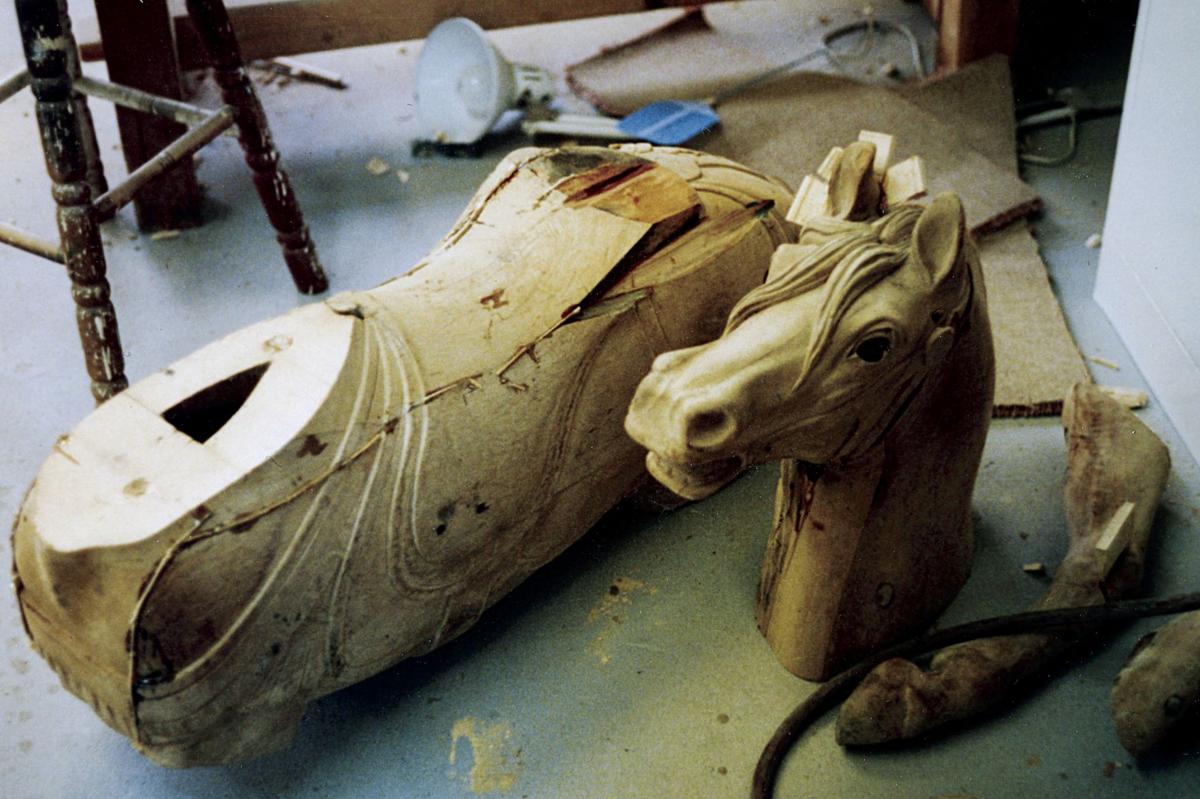 One of the carousel’s horses is disassembled during restoration at the Carousel Works in Mansfield, Ohio. 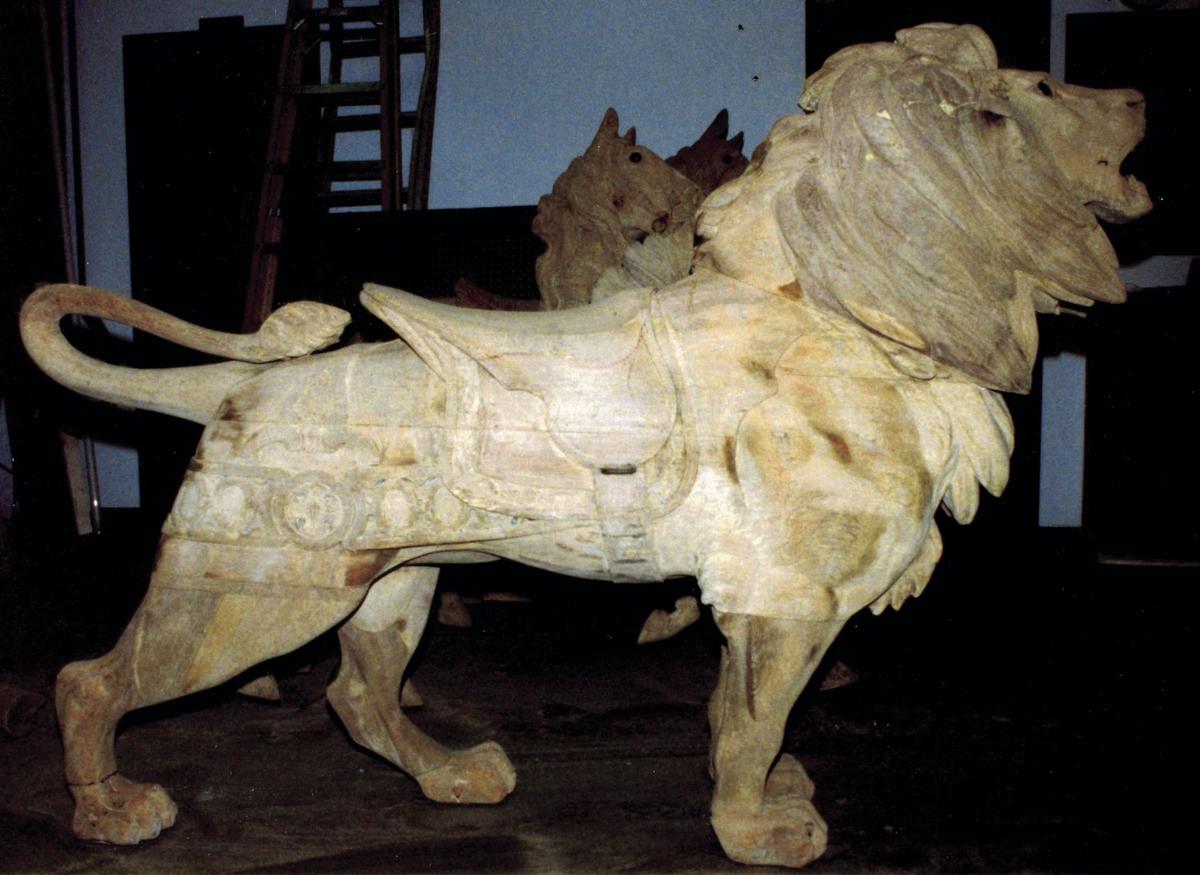 The carousel’s lion is stripped and ready for repainting during the restoration at the Carousel Works in Mansfield, Ohio. 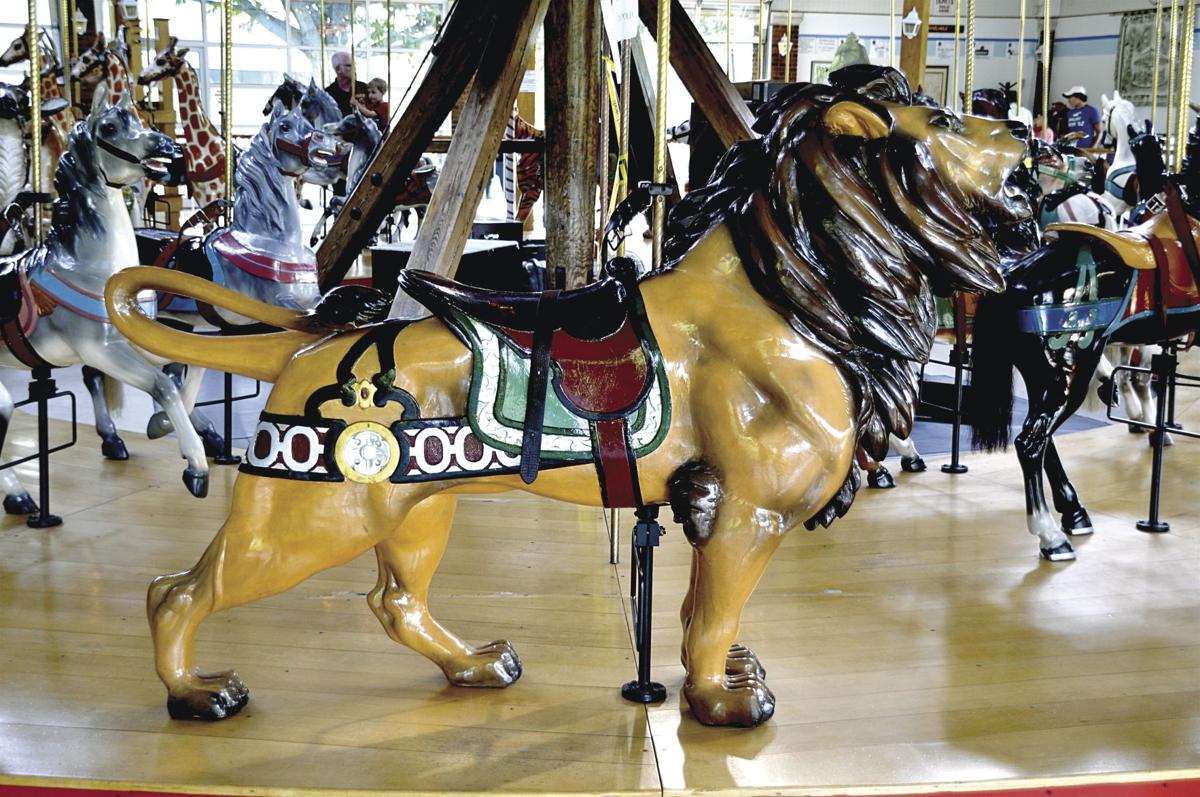 The carousel’s lion, after being restored in 2002. 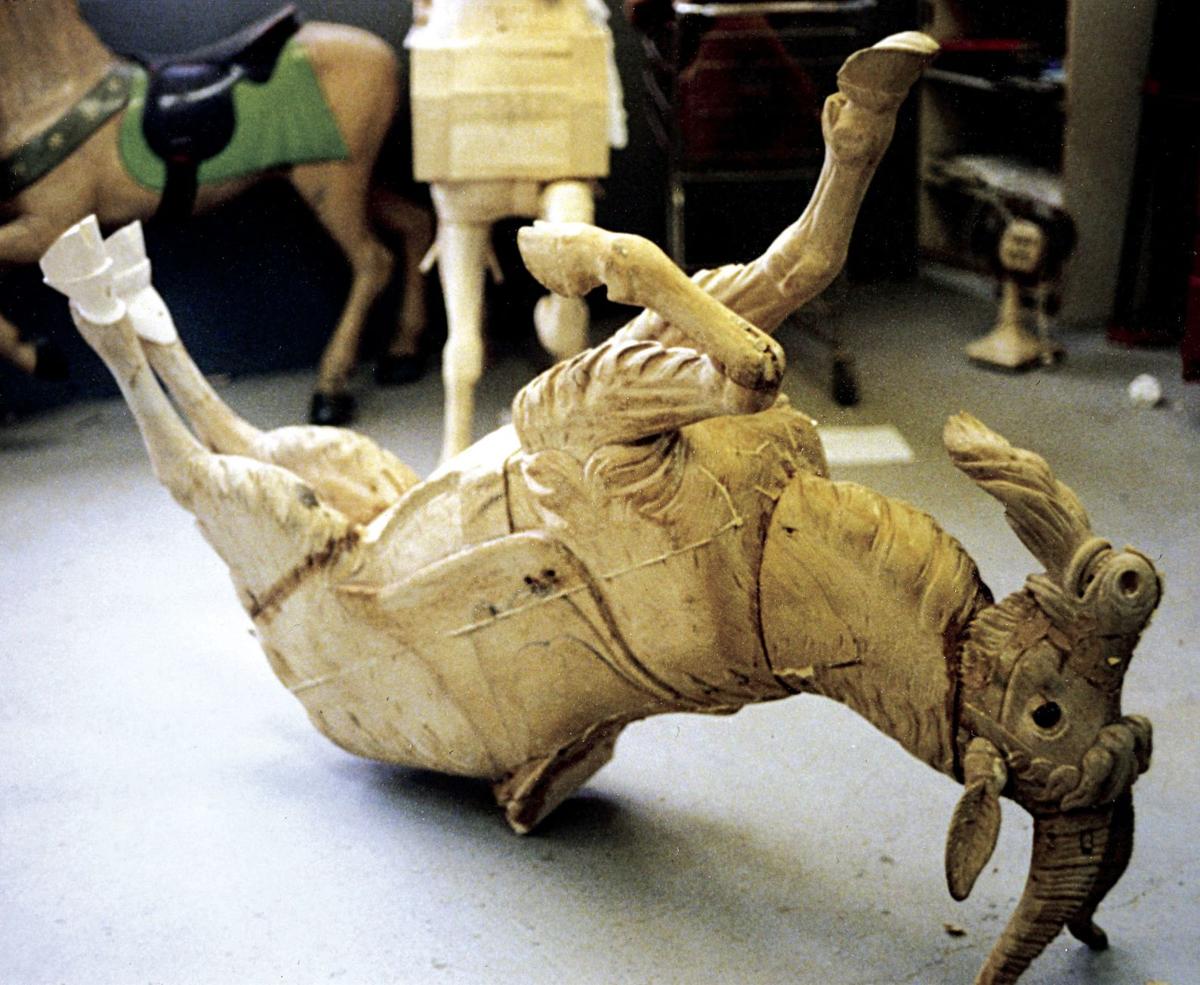 One of the Cass County Dentzel Carousel’s goats is stripped in preparation for repainting at the Carousel Works in Mansfield, Ohio. 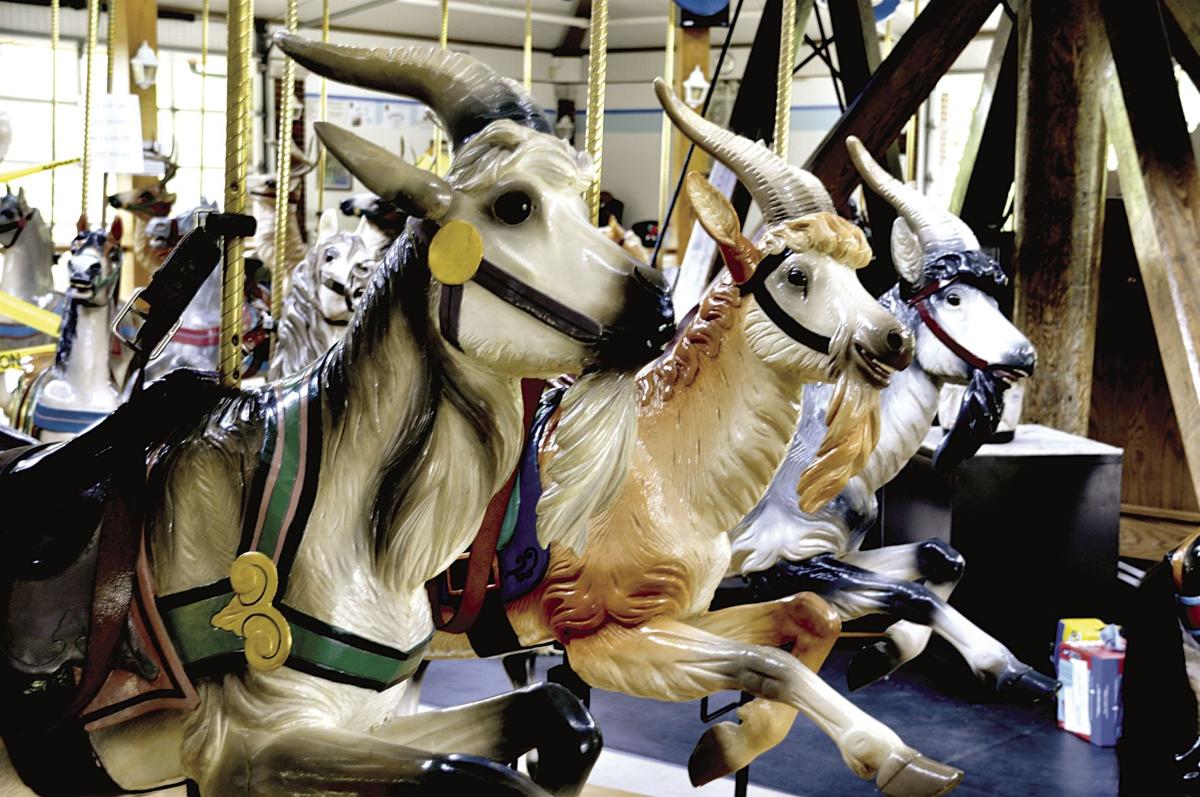 The restored goats ride side-by-side on the carousel. 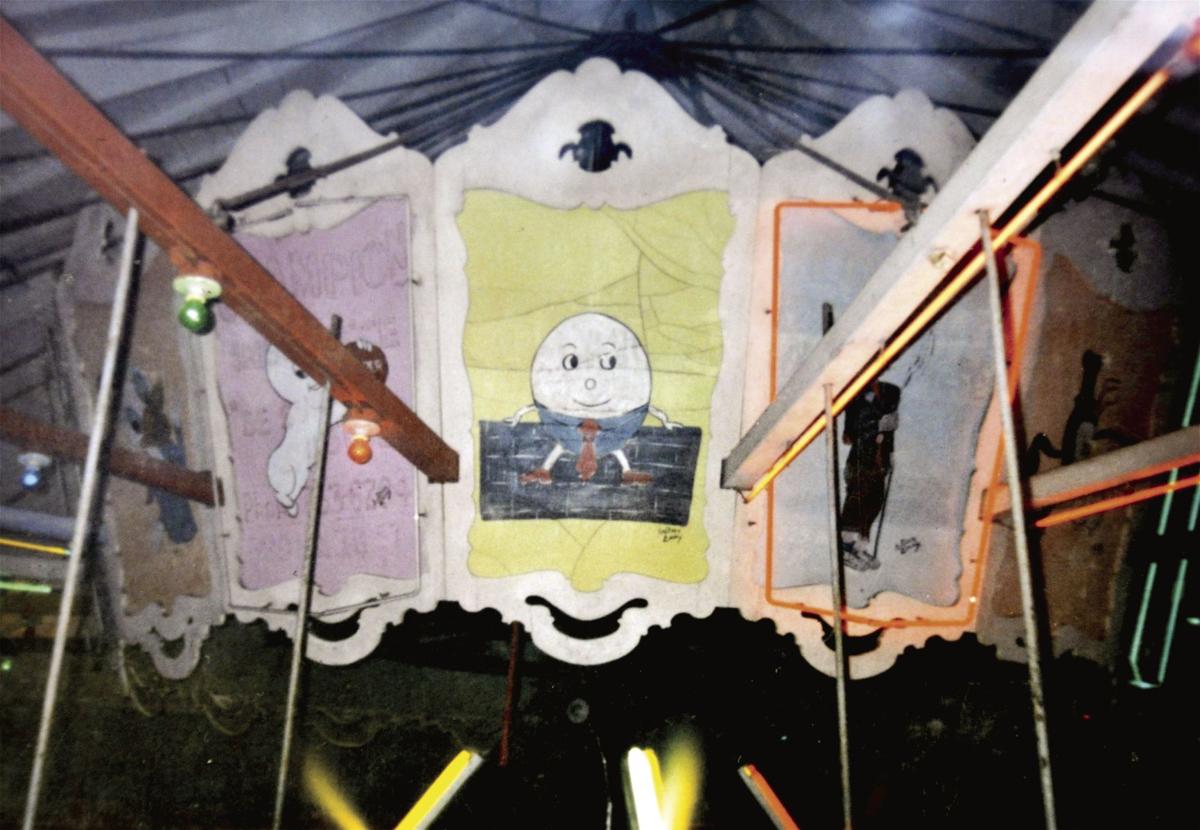 The carousel’s frieze panels were once painted with cartoon characters. 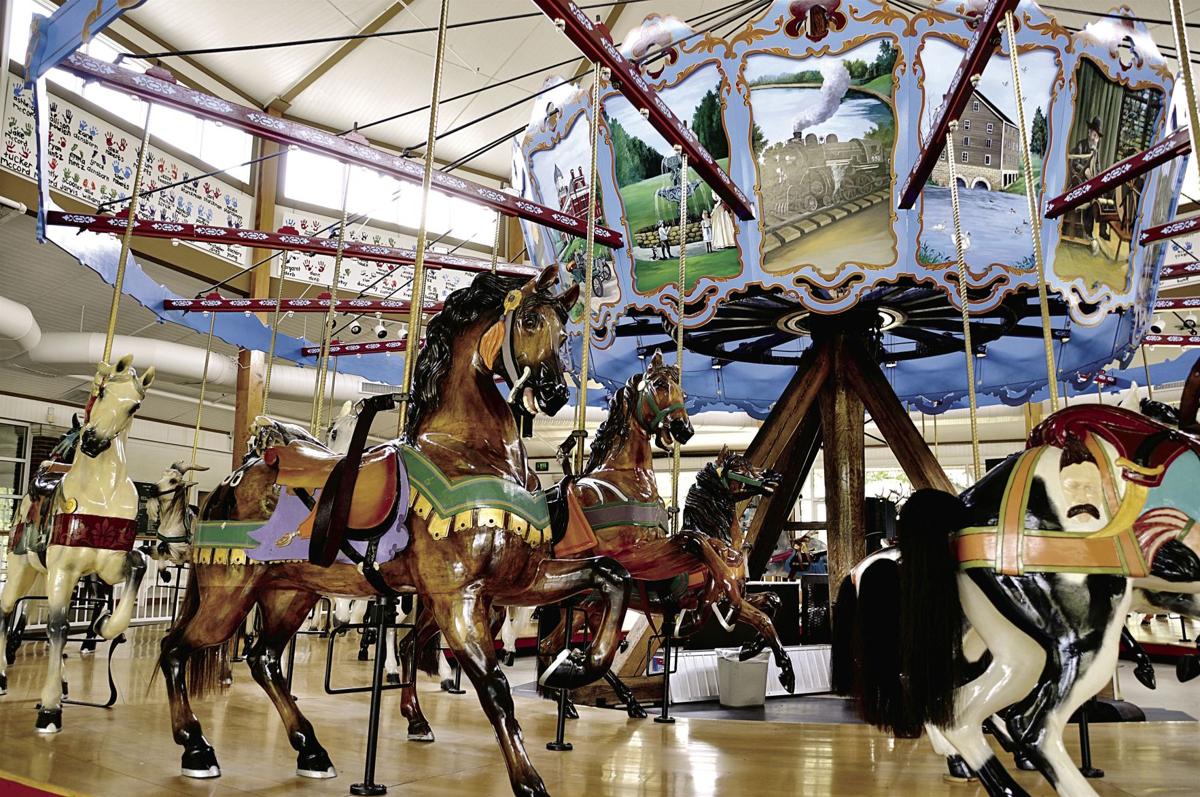 Carousel figures are seen through the end of the ring chute, where riders try to grab the prized brass ring.

One of the carousel’s horses is disassembled during restoration at the Carousel Works in Mansfield, Ohio.

The carousel’s lion is stripped and ready for repainting during the restoration at the Carousel Works in Mansfield, Ohio.

The carousel’s lion, after being restored in 2002.

One of the Cass County Dentzel Carousel’s goats is stripped in preparation for repainting at the Carousel Works in Mansfield, Ohio.

The restored goats ride side-by-side on the carousel.

The carousel’s frieze panels were once painted with cartoon characters.

For 100 years, Logansport has been home to a rare piece of unique, 19th century artwork — and its the kind you don’t have to admire from behind a velvet rope. In fact, you can climb on board and ride it.

The Cass County Dentzel Carousel celebrates its milestone anniversary today with Carousel Fun Day at Riverside Park. The festivities kick off at 8 a.m. with breakfast at McHale Complex Pavilion.

A ventriloquist will perform at 9:45 a.m., the Batmobile will make an appearance from 10 a.m. until noon and a car show and canoe rides also begin at 10 a.m. The Peru Circus will be there too, as will Anna and Elsa from Disney’s “Frozen.” The Human Fuse, as seen on “America’s Got Talent,” will perform at 1:45 p.m. There will also be draft horse wagon rides from noon to 6 p.m. and tethered hot air balloon rides, weather permitting, from 6-8 p.m.

A full schedule of events is available at the carousel and at numerous businesses around town.

The Cass County Dentzel Carousel is one of three complete Dentzel carousels in the United States. Each animal was meticulously hand-crafted Gustav Dentzel, a German immigrant who took up residence the Germantown area of Philadelphia in the late 1800s, and his workers. Dentzel opened a cabinet shop but after seven years grew bored and decided he would try his hand at creating carousels. Dentzel’s father, Michael Dentzel, carved carousels back home in Germany. Cass County’s carousel was completed in 1885.

There are 43 animals and three chariots on the Cass County Carousel. Only one horse and one chariot are not original to the carousel — the horse was purchased as a replacement and was carved by Dentzel’s son and the chariot was added later to accommodate those in wheelchairs.

Before the carousel came to Logansport, it ran at Roberts Park in Fort Wayne from 1901 until it was bought by Duey Schmidt in 1919 for $1,000. Schmidt transported the carousel by urban line to Logansport. It resided at Spencer Park until 1949 when it was moved to Riverside Park.

The carousel ran until 1969 when it was put up for sale because the last private owner died.

The carousel was ultimately bought by the Logansport Jaycees for about $15,000, according to Gasho. “The Jaycee’s never owned it. As soon as they bought it, they started the Carousel Corporation.”

The Carousel Corp. owns the carousel and is independently operated by a volunteer board of directors. It rents a space at Riverside Park and the 99 year lease isn’t up until 2094.

The Carousel Corp.’s mission statement is, “to preserve and protect the Dentzel Carousel for the children of Cass County. Forever.”

Gasho, who is now in his 60s, has been with the Cass County Carousel for 45 seasons. He started out at the age of 13 when the adjacent miniature train was silver and looked like an old streamliner, he said. “I worked until 1969 when we closed her down, then I graduated high school, went off into the service, came back and have been doing it ever since.”

The carousel ran in the old building next to its current location until Labor Day weekend of 1994. The old building was hard on the animals — which are made wood except for their glass eyes. With the cold winters and humid summers, the animals started cracking and dry rotting.

The new building — which is a humidity controlled building — was purchased in 1993 and took two years to complete, according to Gasho. The interior is decorated with painted hand-prints, bricks and plaques with donor names on them.

“You see that gentlemen right there?” Gasho said as he pointed at a brick, “That’s me. I had them put it on the Westside because I’m a west-end kid. That’s my little claim to fame there.”

The new building reopened July of 1995, the 100th anniversary of Riverside Park.

The murals that run across the carousel now are oil paintings based on photos from the book “Where Two Rivers Meet.”

The lead horse of the carousel was named “Princess Logan” by name contest winner Bradley Liebner in 2000. According to Gasho, Liebner knew that the horse was a girl because “she was wearing earrings.” That horse is the only original figure not restored by the Carousel Works. It was done by the Logansport Art Association in 1989-90.

“This carousel is for kids of all ages,” said Gasho. He said that a high school celebrated its 60th high school reunion at the carousel earlier this summer. “All but one person sat on the horses and rode.”

The carousel hosted a family reunion recently where one woman was 102, according to Gasho, and that woman also got on and rode. “She said, ‘I want to ride it one more time. I rode on it originally when it was in Spencer Park.’”

McDonald, Bonnie K. (Hellyer) James, 76, Logansport, a gathering of family and friends will be from 3-6 p.m. today at Fisher Funeral Chapel.