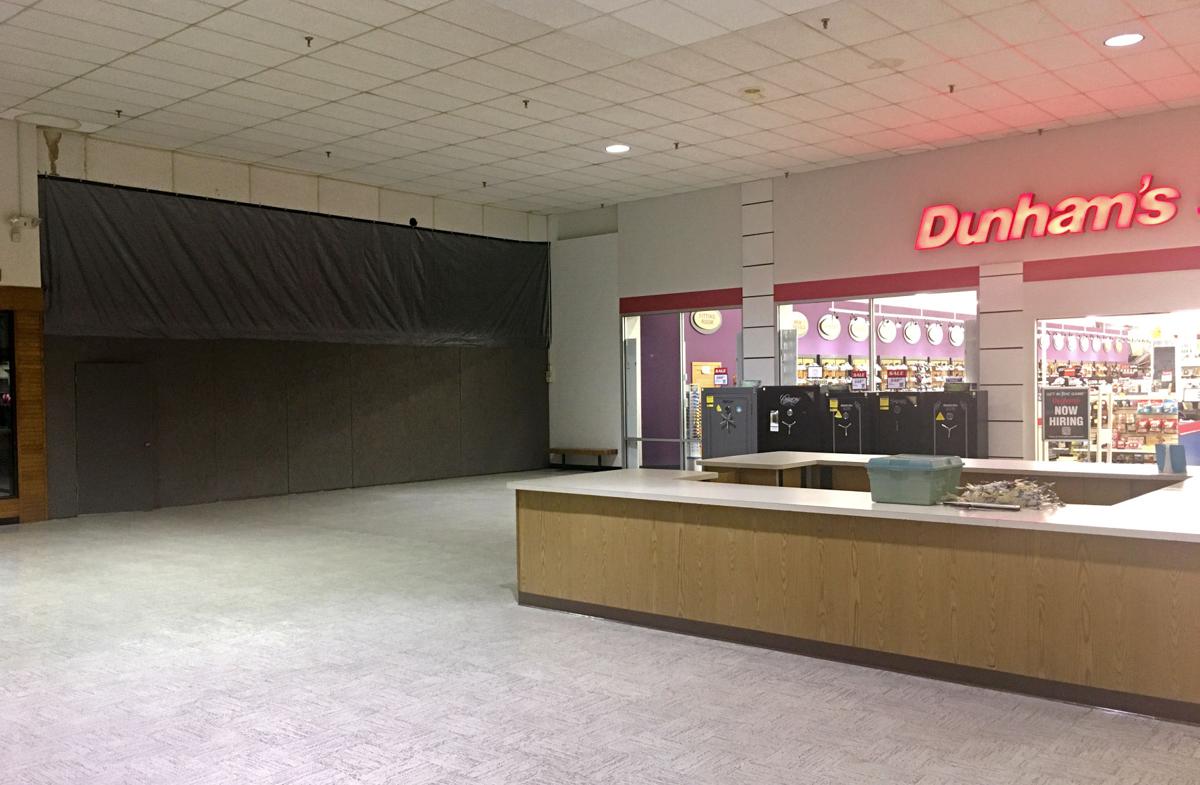 Walls were erected Sunday at the Logansport Mall on both side of Dunham’s, closing off the east and west concourses. 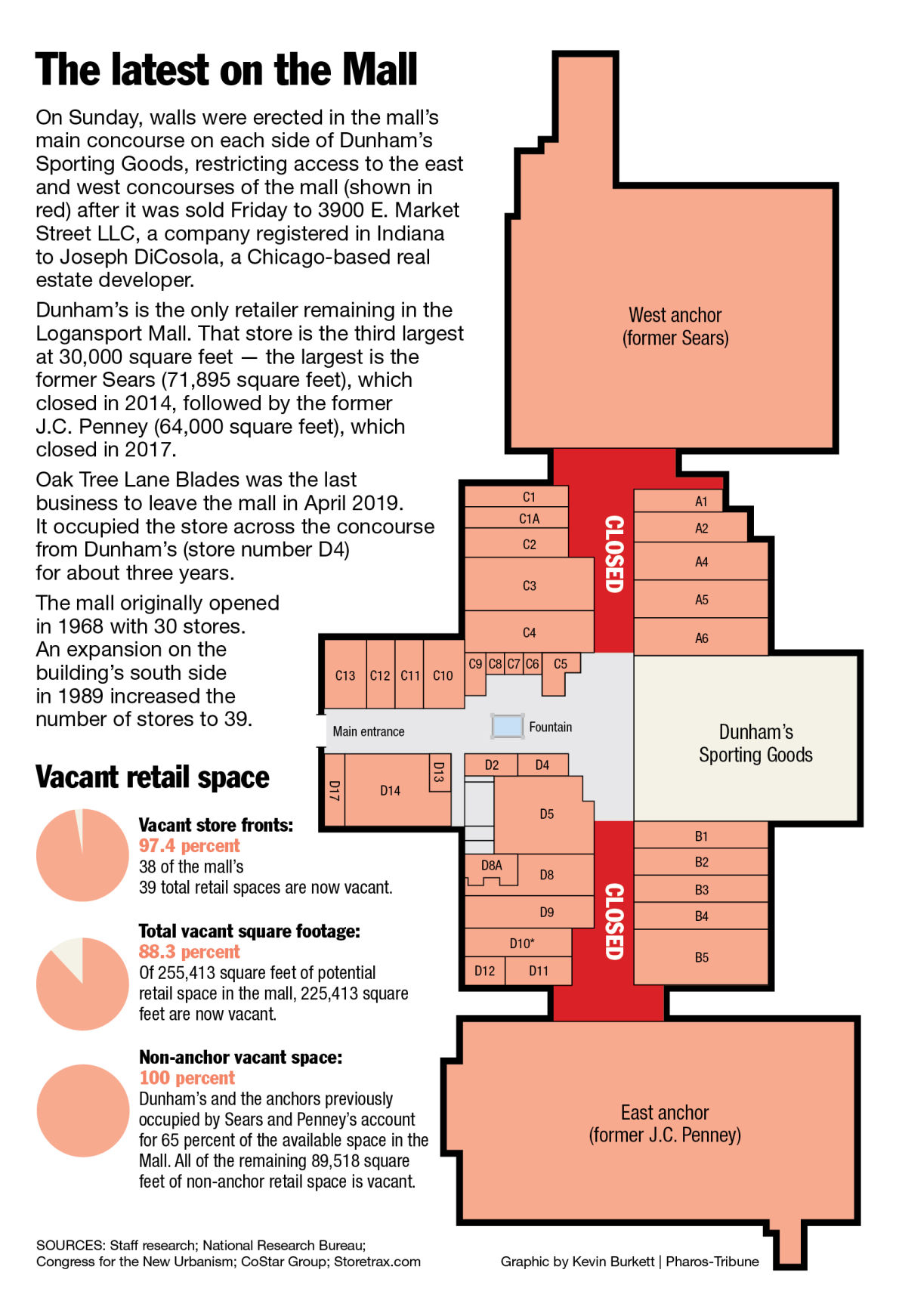 Walls were erected Sunday at the Logansport Mall on both side of Dunham’s, closing off the east and west concourses.

The Logansport Mall was officially sold to a Chicago-based developer on Friday, Feb. 21, according to a press release issued Wednesday.

The firm paid $1.4 million for three pieces of property that until Friday belonged to Logansport Mall LLC, according to the Cass County Assessor’s Office records.

Those properties include the main mall structure, a separate parcel that contains the old Sears site and the parking around it and about .17 acres between Security Federal Saving Bank and H&R Block that constitute an entrance from Mall Road to the mall, assessor's records show. The main mall property includes the strip mall southwest of the mall, which has a Dollar Tree and once housed an Asian market and the local Bureau of Motor Vehicles branch.

The press release, issued by Burkhart Marketing of Indianapolis, named Park Development LLC as the new owner. However, an examination of assessor's office records indicates that the company's name is 3900 East Market Street LLC.

Those records list the company's address of 2625 N. Ashland Ave. in Chicago. However, the Indiana Secretary of State's website shows that the limited liability company was formed in Indiana on Dec. 21, 2019 by Joseph DiCosola and has an address listed as 3900 E. Market St., which is the mall property. A search of the Illinois business entities found that a Park Development LLC had previously been formed in 2015 by DiCosola at the same Ashland Avenue, Chicago, address listed by the local assessor's office.

The only official remarks from the company on the project came from the press release issued Thursday.

“We can’t wait to break ground on this project,” an unidentified spokesperson stated. “We can’t thank the current and prior city administrations enough for everything they’ve done to help finalize this deal. This project has the potential to revitalize the City of Logansport and drastically improve its economic vitality.”

However, the developer is not releasing any information about plans for the mall now, the press release stated.

It also stated that construction is scheduled to start soon, and “information about design plans and potential tenants will be released soon.”

There have already been changes in the mall. On Sunday, walls was erected to block off the east and west concourses from the main concourse. The public can no longer access areas past Dunham's Sporting Goods, the only business that still occupies the mall. Walkers have been using the remaining concourse for exercise.

Although negotiations for the sale have been ongoing between the current and former mayor's administrations for months, there are no deals with the city decided on yet.

“No formal proposal has been done, so they have purchased this property without a formal agreement,” said Bill Cuppy, executive director of the Cass Logansport Economic Development Organization (CLEDO). CLEDO has been heavily involved in the negotiations.

Mayor Chris Martin met with people involved with the project on Thursday afternoon.

“Obviously, it’s a great opportunity for our community, but you have to put one foot in front of the other. It’s a step in the right direction, but we have worked very hard with the developer,” Martin said.

Cuppy stated for the press release, “Frankly, the mall has just been a big eyesore that people are tired of looking at.”

“This will certainly provide a nice kick start for the Logansport economy — one that we hope might lead to further development," Cuppy said. "A lot of work and due diligence has gone into this project, and at the local level we will continue to work with the new owner to bring this development to completion. We can’t wait to watch it take shape.”

The latest on the Mall

On Sunday, walls were erected in the mall’s main concourse on each side of Dunham’s Sporting…

George L. Malchow, 84, passed away yesterday at Northwoods Village in Kokomo. George's full obituary is at ransfuneralhomes.com His service will be live streamed at 2 p.m., Wednesday at Rans Funeral Home & Crematory Facebook page.