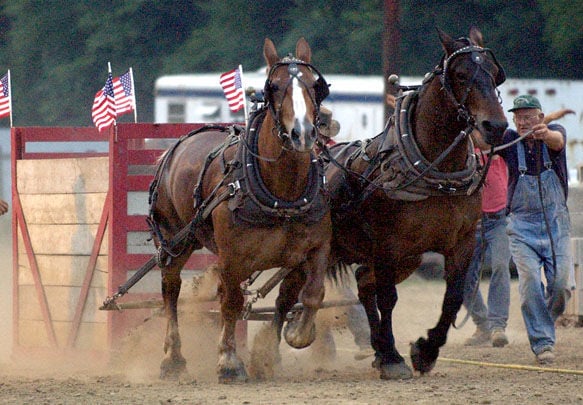 Phil Heckathorn brings his horse team to a "full pull" to win the competition Wednesday at the Cass County Fairgrounds. Phros-Tribune photo by ANgi Turnpaug 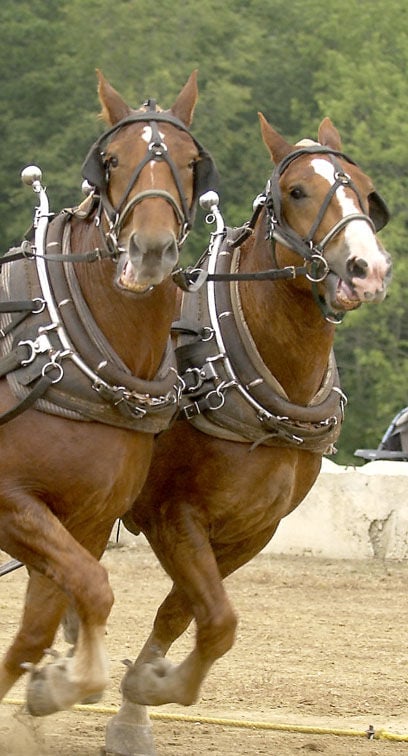 This pair of draft horses appear to be smiling for the camera as they make their way ,in perfect step, to the pull track. Pharos-Tribune photo by Angi Turnpaugh

Phil Heckathorn brings his horse team to a "full pull" to win the competition Wednesday at the Cass County Fairgrounds. Phros-Tribune photo by ANgi Turnpaug

This pair of draft horses appear to be smiling for the camera as they make their way ,in perfect step, to the pull track. Pharos-Tribune photo by Angi Turnpaugh

By DAVE KITCHELL Pharos-Tribune staff writer It is not too often when a county fair queen becomes a grand champion in a livestock show. When Cass 4-H¹ers rallied in the Exhibition Building for the annual Dairy Show Wednesday, there was a familiar name at the top of the list at the end. Jordan Harvey was the grand champion, and the emphasis was definitely on her livestock award. When the announcement of her honor was made, the announcer noted that she was also the fair queen. It was a day for familiar names and family names that have traditionally done well in the Cass County agricultural sector. One of those names was Farrer. In the Beef Show, Bailey Farrer won grand champion honors. Taylor Miller took home the reserve award. Far and away, the Farrer family did well in the showmanship portion of the show, too. Taylor Farrer was the master showman and John Farrer was the senior showman winner. Miller was the intermediate showman and Brooke Langley was the junior showman. Not long after Harvey won her second major fair title of the week, the family of Mr. Happy Burger, Bob Shanks, was doing well in the Bake-A-Rama. Shanks¹ daughter, Sherry VanSoest, won the competition. Sara Cowell, the 1983 Cass queen, was second, and Shanks¹ wife, Shirley, was third. When Harvey competes next month at the Indiana State Fair for queen of that event, she may have some company from Cass County. Winners of the show are Amanda Burris, Kelcie Fritz, Rushelle Mund, Gabriel Businger and Samantha Hunt; Sarah Fisher; Kayla Blinn, Kim Bergman and Mary Weber; and Jimmy Hildebrand. Others who participated were: Molly Williams, Tarah Small, Graham Redweik, Travis Buffum, Tony Dyer, Allie Williams and Marisa Brugh. Today, the focus is on the 4-H Swine Show. People like James Hook, a Caston eighth-grader, and Garrett Redweik, a Caston junior, will be competing. Hook says he¹ll be showing three hogs in the show and has a friendly competition with Redweik, who says he has the hang of the hog competition, but probably will not win. Both 4-H¹ers enjoyed the Battle of the Barns competition in the Exhibition Building Wednesday, but chose to watch it rather than compete. Tonight, 30 4-H¹ers who have completed their 10 years of eligibility will be honored in a ceremony at in the Exhibition Building. Members of that group are Alexandra Cocolin, Katherine Cox, Mallory DeHaven, Tyler Delon, Justin Feltis, Savannah Forgey, Erica Fox, David Franklin, Jordan Harvey, Tara Herd, Kegan Hoover, Kayla Howard, Marianne Ingle, Adam Kennell, McCall Kitchel, Brent Moon, Joseph Munson, Kyan Murphy, Veronica Novak, Kyle O¹Brien, Adam Peppers, Nate Plank, Scott Rudicel, Thomas Schafer, Kristofer Scott, Justin Sell, Miles Shanks, Ryan Small, Donavon Stark and Justin Zimmer.

Michelle Lynn Clary, Logansport, passed away in the comfort of her home on Thursday, April 15, 2021, at the age of 33. Arrangements are pending. The complete obituary is available at www.kroegerfuneralhome.com.

Shaw, Irene F., 91, of Logansport, a funeral service celebrating Irene’s life will be held at noon today at Fisher Funeral Chapel, with Pastor Adam Speicher officiating. Interment will follow in the Ever Rest Memorial Park. Friends will be received one hour prior to the service in the funera…