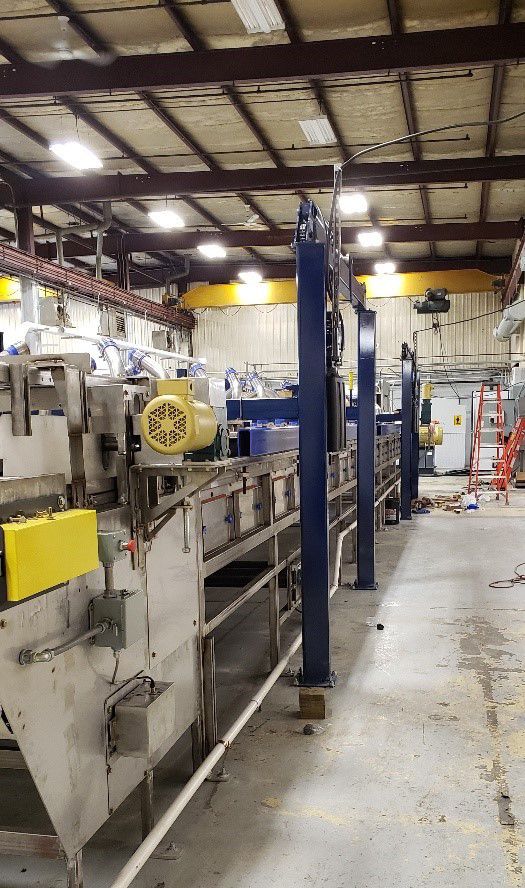 The 22,000-square-foot facility is designed to take Third Wave Farms network farmers’ material from harvest and convert it into a stable, storable, market-ready product.

The 22,000-square-foot facility is designed to take Third Wave Farms network farmers’ material from harvest and convert it into a stable, storable, market-ready product.

KOKOMO — Third Wave Farms has opened it’s first hemp drying and processing facility in Kokomo, according to a press release.

The 22,000-square-foot facility is designed to take Third Wave Farms network farmers’ material from harvest and convert it into a stable, storable, market-ready product. It is critical to remove moisture from the hemp material immediately after harvest in order to protect the value and quality of the finished material.

“One of the biggest hurdles that our emerging industrial hemp industry faces is access to infrastructure to support farmers," said Mike Lewis, co-founder of Third Wave Farms in the press release. "At Third Wave Farms, we recognized early on that in order to bring quality grown hemp into the marketplace we needed to have infrastructure to support post harvest handling. This drying facility will not only protect farmers’ crops in the short term but also provide an extra level of protection by allowing material to be stored and marketed when demand is at its peak.”

A hemp farm in Cass County is among those that have partnered with Third Wave Farms. Chuck Stephenson farms southeast of Logansport. In September, Third Wave Farms and the Hemp Chapter of the Indiana Farmers Union held a symposium on his land to introduce farmers to hemp as a crop. Stephenson liked the idea of having the seminar in a tent among his crop because he wants to get others involved in what looks like a new industry.

Hemp, which is related to cannabis but doesn’t contain enough THC to produce a “high,” has been legalized as a crop since 2018, when the federal farm bill allowed states to grow and regulate hemp for the first time since World War II. It was used for things like parachutes and rope and was used for paper in colonial times.

The new Kokomo facility features a customized, high-pressure, low heat conveyor system that dries the hemp to a stable moisture percentage to be prepared for shipment to Third Wave Farms’ extraction processing partners where it will be turned into dozens of cannabinoid based products for clients. It also has a Commercial Python Trimmer that processes hundreds of pounds of hemp flower per hour to create a higher-value, smokable material, which ultimately ends up in pre-rolled cones and filtered hemp cigarettes that will also be produced on site. Overall, this hub has the capacity to process over 75,000 pounds of materials per day. Third Wave Farms’ ability to process the green hemp flower quickly is critical to helping farmers mitigate risk by ensuring their crops get dried quickly and are in a controlled, food-safe environment.

“We couldn’t be happier with our choice to call Kokomo home for our first of many hubs," Lewis said. "The community has been wonderful and it is an honor to be able to help rebuild some the region’s agricultural heritage with this new crop. Now hemp farmers in Indiana have the piece of mind that one of the most important pieces of infrastructure needed to move this crop forward is on the ground and running in Kokomo.”

The Kokomo-based hub has a growing team of 10 trained staff members and currently supports farmers in the Third Wave Farms network. It is located at 2311 N. Washington St.

On Friday, Nov. 15, from noon to 3 p.m., Third Wave Farms will be hosting a free open house for the community to see the facility and better understand its operation.

Later that day, from 6-9 p.m., in partnership with Midwest Hemp Council, Third Wave Farms will be hosting a ticketed event to kick off the weekend’s Hemp at the Crossroads in Indianapolis. Lewis will be speaking at the event and there will be an opportunity to tour the drying and processing facility. Tickets are $30 and available at Eventbrite.