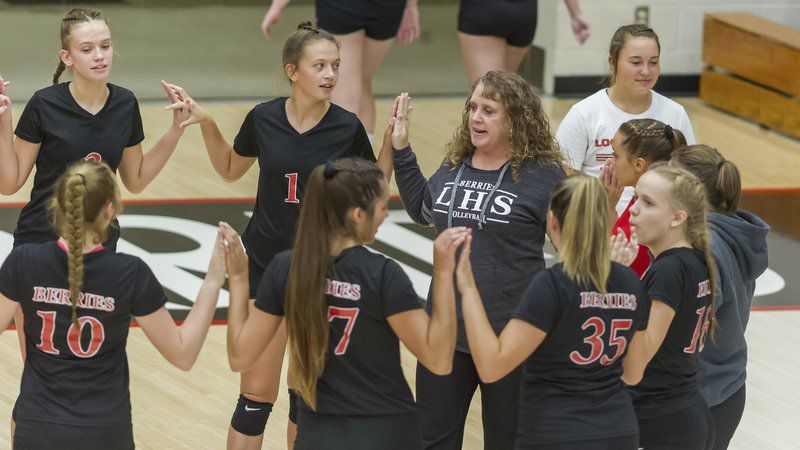 Logansport volleyball coach Dena Kuhn gets together with the team before a match earlier in the season against Knox. Fran Ruchalski | Pharos-Tribune 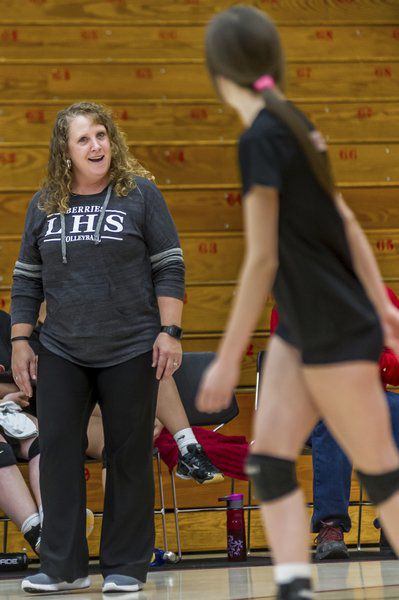 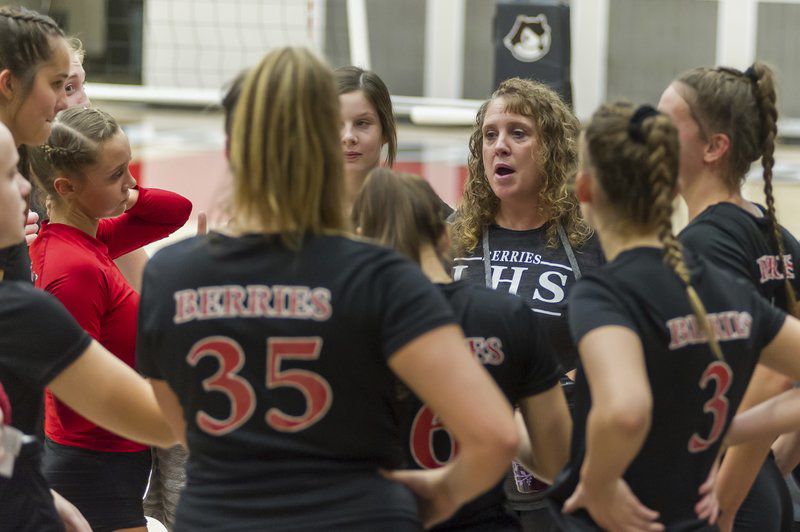 Logansport volleyball coach Dena Kuhn goes over what the team has done well and where improvements need to be made between sets of a match earlier in the season against Knox. Fran Ruchalski | Pharos-Tribune 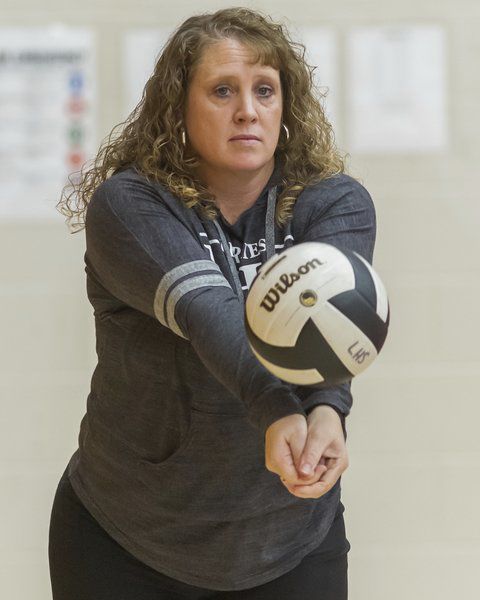 Logansport volleyball coach Dena Kuhn warms up the team before a match earlier in the season against Knox. Fran Ruchalski | Pharos-Tribune

Logansport volleyball coach Dena Kuhn gets together with the team before a match earlier in the season against Knox. Fran Ruchalski | Pharos-Tribune

Logansport volleyball coach Dena Kuhn goes over what the team has done well and where improvements need to be made between sets of a match earlier in the season against Knox. Fran Ruchalski | Pharos-Tribune

Logansport volleyball coach Dena Kuhn warms up the team before a match earlier in the season against Knox. Fran Ruchalski | Pharos-Tribune

High school sports can teach many life lessons, such as perseverance, hard work and showing strength in the face of adversity.

Kuhn, 45, is coaching this season having been diagnosed with skin cancer. She was diagnosed with malignant melanoma in her leg last February. It was removed, but she said unfortunately the cancer got into her lymph nodes.

“It got into my lymph nodes and that’s the super highway to bad," Kuhn said.

Kuhn has been undergoing immunotherapy once a month since her diagnosis and is about halfway through her one year of scheduled treatments. She said her particular treatment is experimental for her type of cancer.

“I do immunotherapy instead of chemotherapy. So right now that’s holding it at bay,” she said. “It’s a newer drug. They haven’t used it for this. But the trials have gone through and it seems to work, so they went ahead and started me on that. It’s not as harsh as chemotherapy, and I take a double dose once a month, as long as I can handle that. The only thing right now I’m dealing with is nausea. And if that’s all the worse it gets then wonderful.

“We felt sorry for me a little bit until we got down to Indianapolis and saw all these other cancer patients who have it way worse, and now I know that I can do this. If they can battle the way they’re battling, then I can do this.”

The nausea can affect her at times while she’s coaching, she said.

“It’s terrible at times. I’m on a medicine now to curb that. It happens at weird times. So I just take my medicine when it comes on and I just go about my business. So I can handle it. I’ve been working every day and obviously still coaching. It’s not slowing me down too much.”

Though the prognosis is currently good, Kuhn still faces a long road ahead.

“It’ll take the year process to hopefully get rid of it all and then hopefully after that I can say I’m in remission. Then it takes 3-5 years for them to say that you’re cancer free. So it’s going to be a long haul,” she said.

The life of a varsity coach already consists of long days and nights. Along with regular work days and practices in the evening, game nights can be long, in particular matches on the road. On Saturdays the Berries will sometimes play four matches in one day at tournaments, as they did this past weekend at the North Central Conference Tournament at Richmond.

Those days get much longer during rounds of treatment, Kuhn said, which for her occur the first Tuesday of every month.

“Every trip down to Indy, whether I go at 6 o’clock in the morning, sometimes we don’t get out until 6 o’clock at night, it just depends,” she said. “It’s just a long day when it’s all said and done and I’m glad to come home. But the next day is kind of hard just because I think of the exhaustion of the day before. The medicine being new in my system as the month goes on it wears off a little bit it seems like.

“My days are long. In the summer it wasn’t so bad because we’d come to practice and then I’d go home and rest. Now it’s school and then practice and film and whatever beyond that.”

Kuhn added the extra exhaustion is worth it to her.

She had an atypical cancer spot on her back that was removed.

“All the cells around it are healthy and that one is just fine. That one didn’t have any root system,” she said.

But she was also diagnosed with melanoma on the back of her leg.

“It was the one on my leg that’s causing me all this trouble,” she said.

She added the skin cancer on the back of her leg was likely just bad luck.

“On my back it was probably the sun. I spent my days out in the sun when I lived on the farm,” she said. “This one [on her leg] was at a very odd spot to be considered sun because it doesn’t see daylight that often. It is what it is and how long it was there I have no idea. That was the hard part. Because once it got to my lymph nodes, that means it’s been there for awhile. It had the roots. It could have silently gotten on to another organ and been way worse than what it is. Thank goodness I just happened upon it and the doctors at the hospital here were quick, we didn’t waste any time.

“To think I had cancer is weird because when you see people with cancer sometimes they’re really sick looking and I didn’t feel sick at all and I didn’t look different. That was the weirdest thing for me is to think that I have an illness that could kill me. And it’s silent.”

Kuhn said the new immunotherapy treatments are allowing her to still teach and coach. Had she needed chemotherapy and radiation, she likely would not have been able to do so.

When Kuhn was first diagnosed with cancer, it was right before the start of the track season last February. She coaches track along wither her husband, Randy, who is the Berries head track coach. Dena coaches the throwing events: discus and shot put.

Kuhn is a 1992 Caston grad. She is in her 19th year of teaching and coaching at Logansport schools. She currently teaches physical education at Columbia and Fairview elementary schools.

“I promised those girls when I let them know last February that this is not going to stop what we do," Kuhn said. "My track kids, when we first told them, they were scared — of course they’re scared. And Carley is scared. But I told them it’s going to be fine. It’s going to be fine."

Kuhn said it was her Logansport volleyball team that came up with the idea to make “Killin’ it for Kuhn” T-shirts. The T-shirts are red for Logansport colors and raise money to help her with her fight.

“It’s something the girls came up with. God love them, they’ve really taken to this,” she said. “Every year we do a cancer shirt, generally we find someone in the public to give that money to. They thought this year why don’t we just give it back to you.

“I thought that was wonderful. It’s a little hard to take. I haven’t worn one of the shirts yet because it feels weird.

"I know that this community and the people that I know are carrying me through this. Because I do have my down days. I try not to ever show it. But there are days."

Pioneer honored Kuhn with a “Red Out” in the Berry Bowl during their match on Aug. 28, with the Pioneer players, coaches and fans in attendance wearing the “Killin’ it for Kuhn” shirts.

“That was absolutely fabulous,” Kuhn said. “When the Pioneer team walked in, it did, it made me cry. It took my breath away a little bit because their coaching staff, all their girls and their crowd did a red out. I went and thanked them for that because their support is phenomenal."

The T-shirts have also been big at Columbia and Fairview schools.

“They did a big shirt drive as well there. The staffs at both buildings have bought the shirts and the kids at Columbia Elementary were allowed to buy the shirts. We ordered almost 300 shirts all together, so it’s amazing,” Kuhn said.

“The love and support of the community and the kids and the other coaches and my coaches and my girls, because they also wore their shirts [Aug. 28] without letting me know — they snuck that one in on me. It’s just nice to know that you have all that support. Because some days are tough.”

The shirts are available by order at Creative Promotions. Kuhn said her cancer ribbon is black but she decided to go with red for the T-shirt colors.

“I said 'I look good in red.' Purple’s my favorite color but we thought school-oriented needed to be red,” she said.

Allie McClure, a senior who’s one of the Berries’ top all-around players, talked about the team’s situation this year.

“It’s just a hard thing for someone so close to you to be going through cancer. But we’re standing by her through it and doing all we can to help her,” she said. “Dena’s definitely been amazing. The only time that anyone has to step up is on Tuesdays when she’s at her treatment. I think the three of us, the three seniors, definitely step up as do the other coaches take over and make sure practice goes as it normally would with Dena here.”

“I think she’s doing amazing. She’s a really strong coach and she’s awesome. We all love her,” Berkshire said.

Mya Shively, the Berries’ senior libero, finished third in the entire state in digs and digs per set last season. She is again among the state leaders this season.

She said Kuhn has long been a part of her life.

“I’ve known her all my life. She was my kindergarten PE teacher. She’s become someone really important in my life. She’s helped me a lot,” Shively said. “We all love her. We all support her.

“We’re pushing through. She said she’s going to be OK. We all believe her, we all love her.”