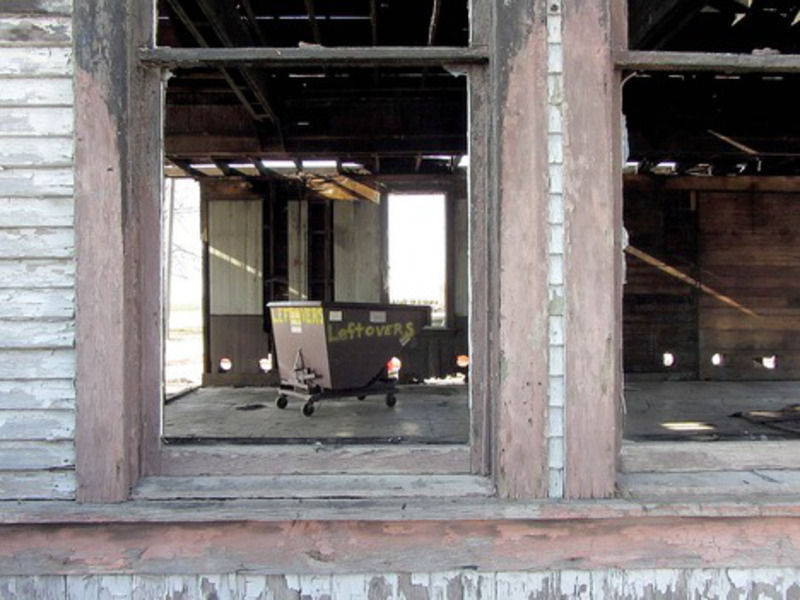 WINDOW: A trash bin awaits the work of volunteers, who planned to continue removing debris and rotted wood from the old Flora depot this month. 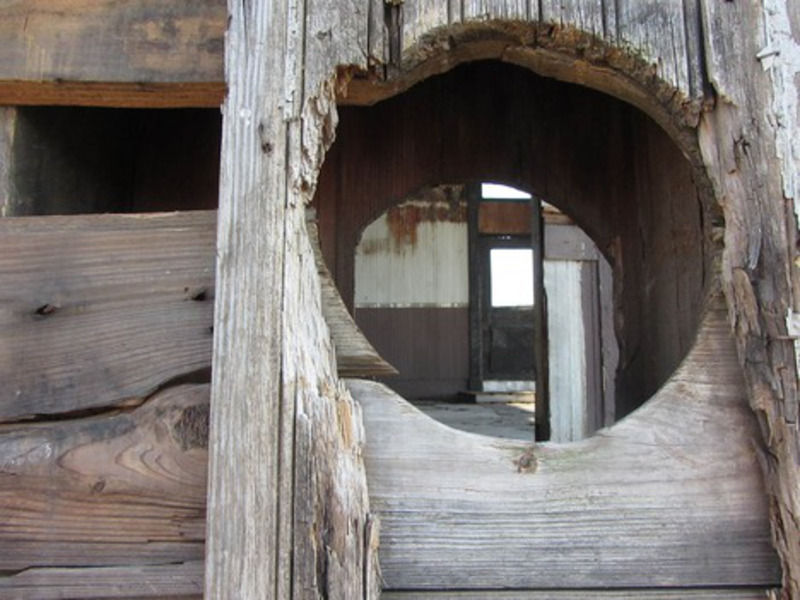 VENT: This and other holes were cut into the lower edge of the west wall to allow dryers to vent outside.

FROM THE ROAD: The northeast corner of the old Flora train depot retains most of its walls. 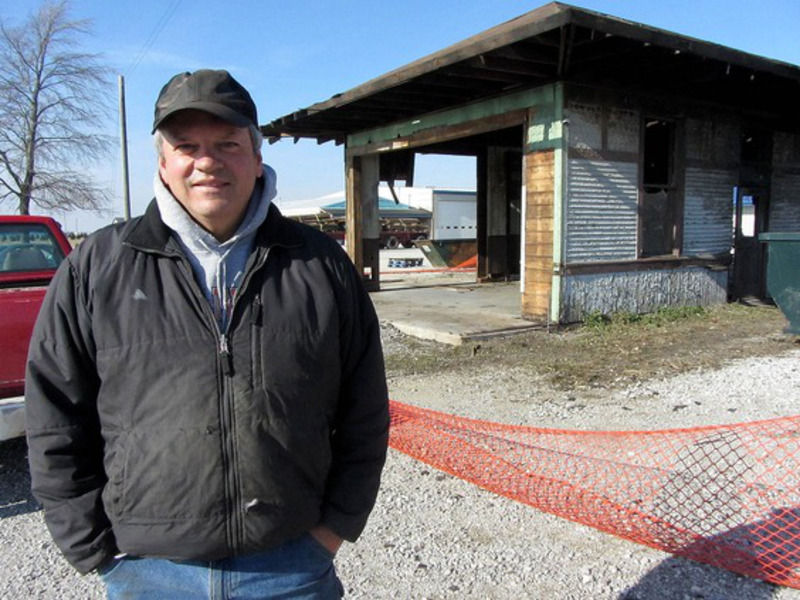 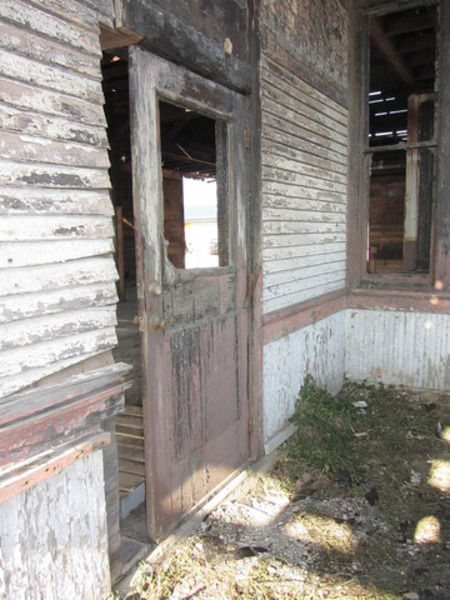 DOOR: One door to the Flora train depot shows signs of a fire 10 years ago that was caused by an exploding washing machine. 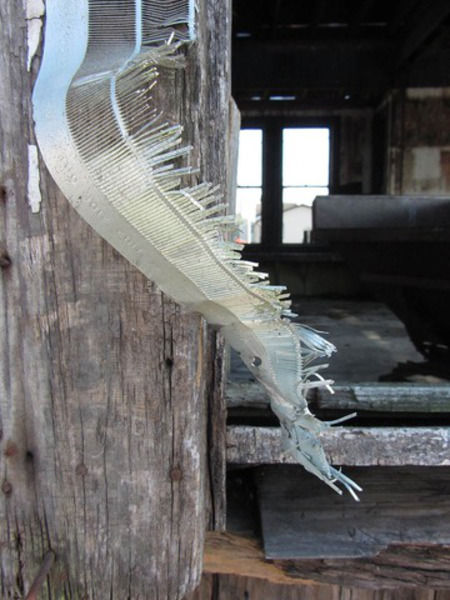 BENT: A portion of a screen remains gnarled after the rest was torn from a window at the old Flora depot.

WINDOW: A trash bin awaits the work of volunteers, who planned to continue removing debris and rotted wood from the old Flora depot this month.

VENT: This and other holes were cut into the lower edge of the west wall to allow dryers to vent outside.

FROM THE ROAD: The northeast corner of the old Flora train depot retains most of its walls.

DOOR: One door to the Flora train depot shows signs of a fire 10 years ago that was caused by an exploding washing machine.

BENT: A portion of a screen remains gnarled after the rest was torn from a window at the old Flora depot.

FLORA — Curt Hufty walked slowly through what remained of the former Flora train depot as he recounted the story.

Now a charred shell, the building had once been located downtown next to the train tracks, he said. After that, it was moved to its present location along Ind. 75 and turned into a laundromat. A fire a few years ago ended its run as a laundromat, and since then, it’s sat empty.

Neighboring business owner Denny Kunz, of D-K Construction, eyed the land for a parking lot. He planned to purchase the property from its present owners, former laundromat operators Mike and Ann Fletcher. But Curt Hufty wanted to save the building first.

“I drive by it every day,” said Hufty, of Collisions Unlimited in Flora. “I like old buildings and trains. My wife and I do a lot of motorcycle riding through the country and it’s neat to see the people who’ve restored old gas stations.”

Hufty and Melissa Bishop, director at the Flora-Monroe Township Library and founding member of Flora Main Street, have been collaborating to do just that.

For years, Flora residents have talked about preserving the depot, but it wasn’t until 2012 that the Carroll County Historical Society signed a contract with the depot’s landowner to buy the building for $1 on condition that it be moved off the property by Sept. 15, 2013. However, those plans fell through.

Once Bishop and others heard that the depot would be torn down if it still stood in its place at the deadline, they had to act fast.

“We could lose it forever,” explained Bishop.

Flora Main Street representatives asked the Flora town council to commit funds for the building’s dismantling. Taking apart the building piece by piece and storing it until it could be reconstructed would be the quickest and least expensive route to saving it, Bishop said.

The town committed $25,000 for dismantling and site cleanup, to come out of cigarette tax revenues. “That was a great support to us,” Bishop said.

That was in August — with just a month to go. However, since activity had gotten under way to save the depot, Kunz agreed to sign another contract to allow Flora Main Street volunteers time to finish the work. Now the volunteers and some workers hired using the town’s funding are working against time, trying to get the building dismantled before bad weather sets in.

Bishop has delved into the history of the building — a “modern” structure in 1908, when it was built, according to Flora centennial documents — and Hufty has done the grunt work of organizing volunteers to clear out the unusable wood and debris from inside the depot.

Most of the west wall was “just about junk,” said Hufty.

Once taken apart into large wall pieces, it’ll be stacked onto a truck bed and put into one of the town buildings for storage, in the hopes that the town will find funding or win a grant to restore it at another location.

How long will it be in storage?

“Who knows ... it may never get up,” admitted Hufty. “It’s just the fact that if we don’t get it down and get it in storage, it wasn’t going to get saved.”

Bishop has applied for up to $2,500 from Indiana Landmarks, a state historical preservation organization, and a matching grant of $625 from the Carroll County Community Foundation to cover the expenses of developing a restoration plan for the depot. Dann Keiser of Cornerstone Design has already been coordinating with Bishop to lay the groundwork for planning. Bishop expects Indiana Landmarks to review the grant application Dec. 20.

In conversations with Indiana Landmarks western regional director Tommy Kleckner, Bishop has learned that the depot is “a rare historic artifact.”

The Flora depot was constructed 36 years after the first Vandalia Rail Road tracks were laid through Flora in 1872 to carry freight. Crews from the railroad finished the station in January 1908 at a cost of $10,000, according to Flora centennial booklets preserved at the Flora library.

The building originally stood at 4 S. Center St. between Main and Columbia streets, on the east side of the tracks, and served as a hub for the area’s increasingly heavy passenger rail service. At one point after the depot’s construction, as many as eight passenger trains stopped in Flora each day.

In 1940, the railroad became known as the Pennsylvania railroad, and the depot came to be called the “Penn Central Railroad Station.” However, over the next several years passenger rail petered out. The last passenger train left Flora on May 23, 1958, headed to points north.

Flora’s centennial history recalls that the town bought the depot lot in 1969 and moved the depot to its present site on Ind. 75, a few hundred yards south of the intersection with Ind. 18. By 1972, the depot had become a laundromat.

News reports from the following day recount the scene of an exploding washing machine that sparked a fire at the old depot around 6:13 p.m. that Saturday. One woman who was inside the laundromat said she’d smelled gasoline just before another, unidentified woman loaded dirty clothes in a washing machine, which exploded when the woman turned it on.

The building was fully engulfed in flames by the time Flora volunteer firefighters arrived on scene. It took them 20 minutes to extinguish the blaze, during which they ripped out portions of the roof and the eaves.

Since the fire, it’s sat empty, with tarps covering the holes in the roof, Hufty said. There’s some water damage in addition to the smoke and heat damage inside, though much of the building — constructed of old hardwood — remains sturdy.

“Despite the fire, and that it’s been sitting there neglected all these years, there’s still a tremendous amount of historic fabric there,” Bishop said. “It’s totally worth salvaging and saving.”

Sarah Einselen is news editor at the Pharos-Tribune. She can be reached at sarah.einselen@pharostribune.com or 574-732-5151. Twitter: @PharosSME.

Want to help? If you're interested in volunteering or donating funds toward dismantling and storing the old Flora train depot, call Curt Hufty, Collisions Unlimited, at 574-967-3320.