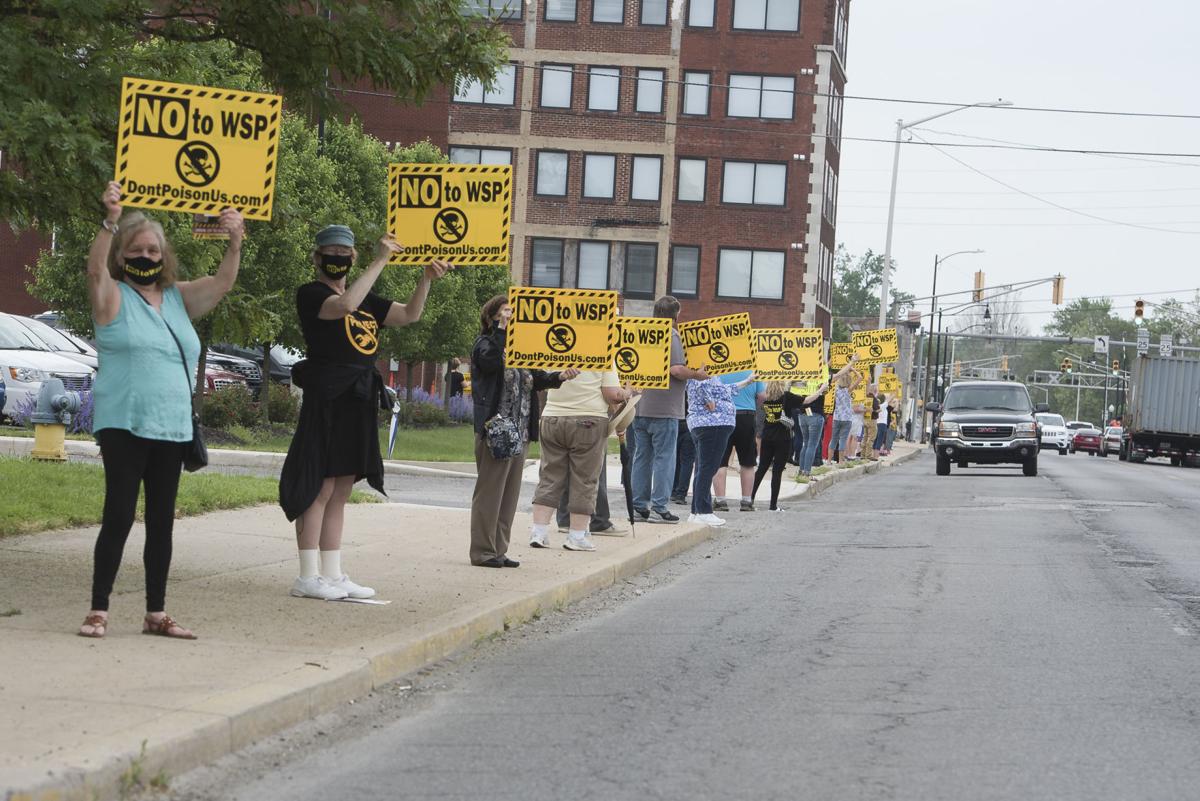 Protesters against a proposed zinc plant west of Logansport took to the streets around the Cass County Government Building Wenesday morning as the county’s Redevelopment Commission met inside. 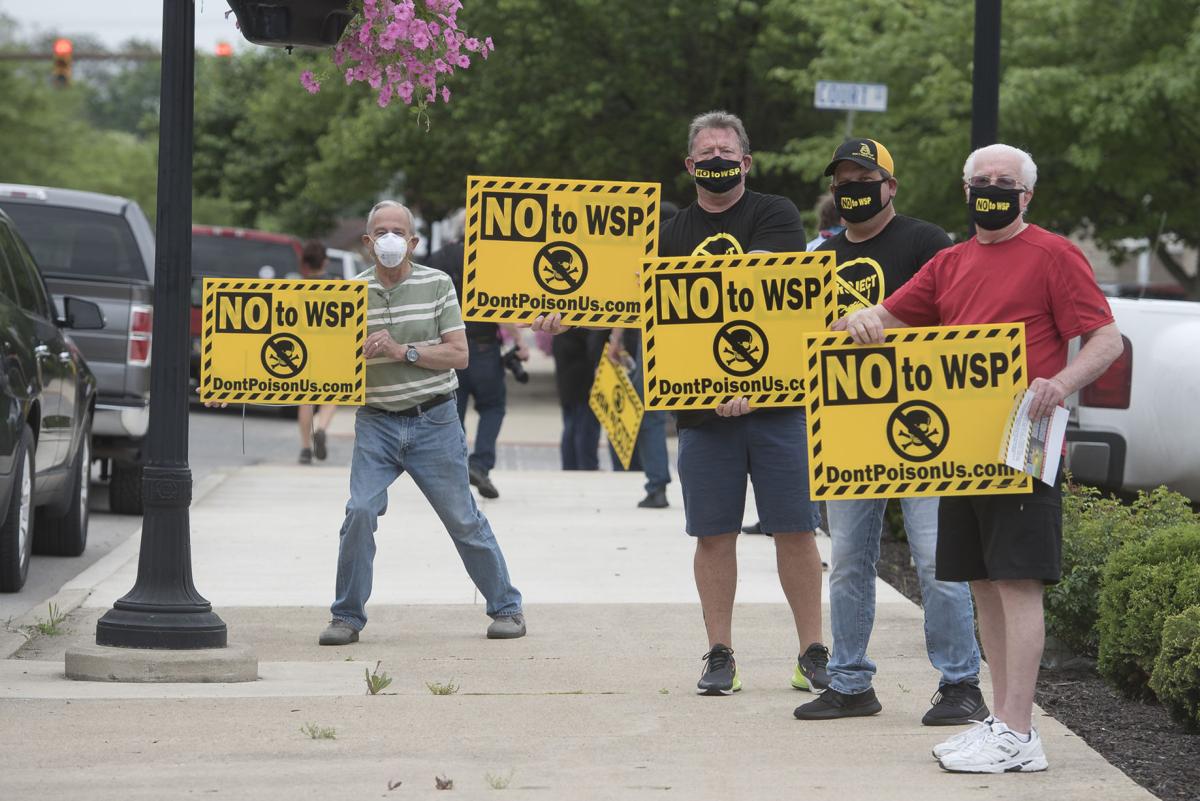 Protesters wear masks that have “No to WSP” printed on them. 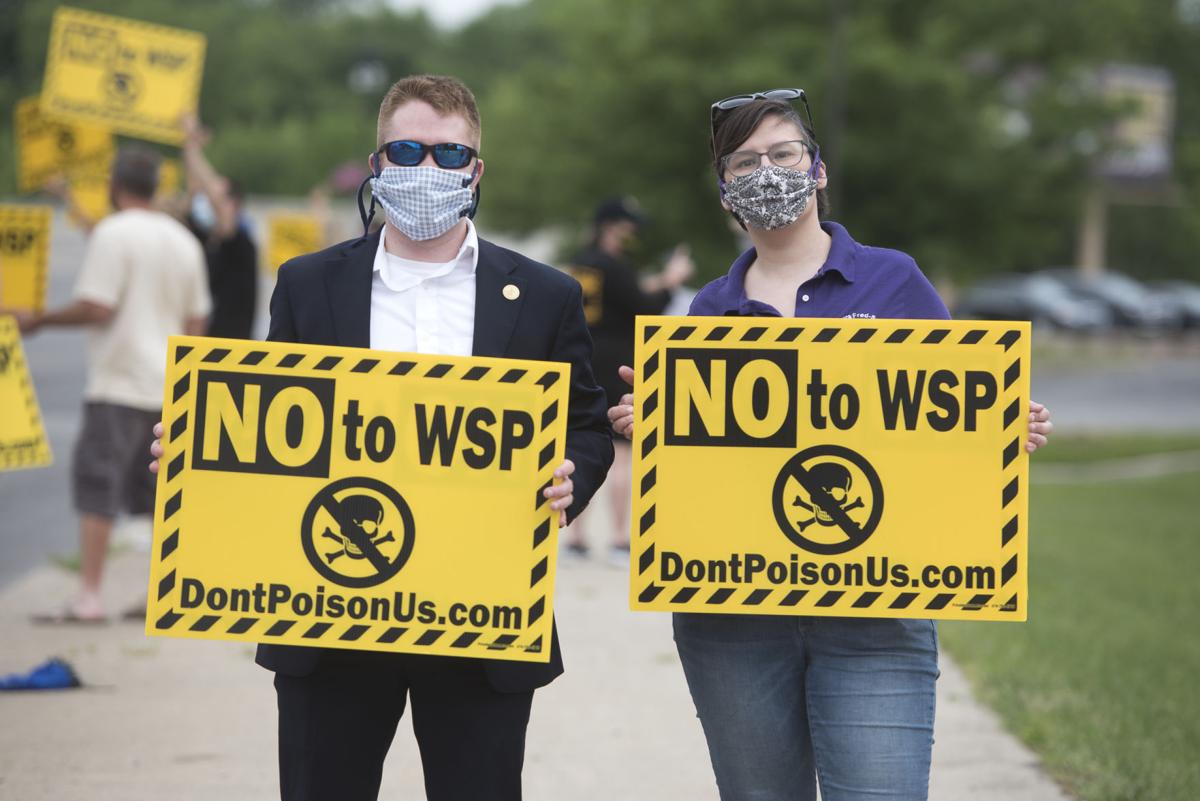 Protesters against a proposed zinc plant west of Logansport took to the streets around the Cass County Government Building Wenesday morning as the county’s Redevelopment Commission met inside.

Protesters wear masks that have “No to WSP” printed on them.

The Cass County Redevelopment Commission met Wednesday as more than 100 gathered outside the Cass County Government Building to protest a proposed zinc plant planned for the Agribusiness Industrial Park west of Logansport.

Three people attending the meeting were upset that the Redevelopment Commission did not allow for public comments in its agenda and said that three items on Wednesday’s agenda would benefit the proposed Waelz Sustainable Products (WSP) zinc plant.

Outside the building, protesters circled the block, lining both sides of the surrounding streets. Drivers that beeped in support of the protest could be heard inside the meeting room. The Cass County Citizen’s Coalition organized the protest.

The commission took steps toward facilitating the building of a water tank and putting in a fire suppression system for hydrants in the Agribusiness Park and nearby Clymers. The commission members approved the bid for an elevated water tank by a company listed on the agenda as Phoenix. They didn’t discuss the cost or scope of the project before voting.

The members also accepted a lone bid for about $800,000 from Ortman Drilling of Kokomo for well field drilling to take under advisement.

And they passed a resolution that would allow the redevelopment commission reimburse itself for any money spent on the fire suppression project out of any bonds they might issue to pay for the project.

According to the original plans, water would come from wells on land to the east that the redevelopment commission owns. From the tank, a 12-inch water main would extend along 300 South, 275 West, 225 South and 375 West — providing fire protection to the Agribusiness Park. Originally, it would also head along 400 West into Clymers, where more hydrants would branch off it.

Redevelopment Commission Attorney John Hillis said that having the system of fire hydrants in the Argibusiness Park would lower insurance rates for those in it considerably.

Just after the meeting adjourned, attorney Jim Brugh said that the fire suppression system was something that should have public discussion and that he had concerns about how the WSP zinc reclamation plant would benefit from this.

The three audience members were told about the lack of public comments, “That’s the way we wanted to do it.”

Hillis said that putting public comment on an agenda is a choice and that the meeting is different from a public hearing.

David Price, who identified himself as a member of the Logansport Board of Zoning Appeals, said, “It doesn’t make sense that we’re spending all this money and we don’t have a chance to speak.”

He also called the lack of ability to comment un-American.

“If you were open and transparent, we wouldn’t be here,” he said.

Sailors walked out while the conversation was happening and said the meeting was not about WSP.

WSP Holdings will present its side of the issue over the next two days.

The company is holding two 90-minute virtual town halls, one at 6 p.m. Thursday and the other tomorrow at noon on Friday.

Those who want to join by webcast should go to www.wspcasscounty.com and click on the “Virtual Town Hall” link in the navigation bar at the top.

Ali Alavi, senior vice president of regulatory affairs and general counsel for Heritage Environmental Services, has said that WSP usually meets with people at high schools and auditoriums at this stage of the project, but because of COVID-19 social-distancing measures that it isn’t possible to do so at this time.