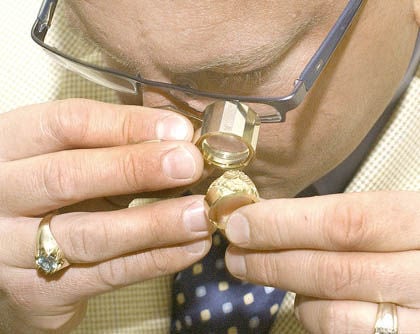 Jerry Arnold, of Arnold’s Jewelry and Gifts in the Logansport Mall, takes a close look at a gold ring. 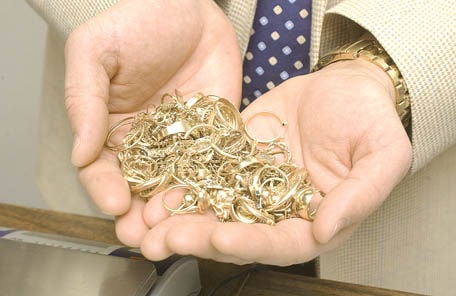 Jerry Arnold holds two handfuls of gold, which he recently purchased. Locally, people have been bringing in old jewelry for cash due to the high market value over the past few months.

Jerry Arnold, of Arnold’s Jewelry and Gifts in the Logansport Mall, takes a close look at a gold ring.

Jerry Arnold holds two handfuls of gold, which he recently purchased. Locally, people have been bringing in old jewelry for cash due to the high market value over the past few months.

Local residents have been taking advantage of a nationwide trend by turning gold into cash. Jerry Arnold, owner of Arnold’s Jewelry and Gifts, said an increase in the market value for gold is allowing people to get more money out of old gold than they would have in previous years. “Gold prices have been rising over the past year,” said Arnold. “Over the past three or four months they have hit record high.” People have turned to selling their used gold for several reasons. “You have some people that may genuinely need to sell because they have expenses to cover,” said Arnold. “There are other people who aren’t using or wearing the gold and they would like to get something new or update their jewelry.” Many local jewelry stores are now advertising that they buy used gold so they can also take advantage of the increased value. “Gold prices, right now, are on a 27-year high,” said Bill Minglin, co-owner of Minglin Jewelers. “Just in the last three months it has gone up approximately 30 to 40 percent.” In November 2007, gold was priced around $750 per ounce, said Minglin. The commodity has gained 10 percent this year and current values are hovering around $1,000 per ounce. Just three to four weeks ago, prices peaked close to $1,035 and though gold prices have slipped since then, many industry analysts say values may soon continue their rise. The price of the commodity changes by the minute, said Arnold, who also keeps a close eye on the value. While 24 karat gold was worth $932.40 per ounce as of Tuesday afternoon, people must understand they will not get this much when trading it in for cash. “What people are trading or selling is usually 10 or 14 karat gold,” said Arnold. “Dental gold is 16 karat. So it has other materials mixed in.” He explained each piece of jewelry must have a total of 24 karats, so other materials are added in to make the gold harder. While 10 and 14 karat gold jewelry is most commonly turned in by customers, jewelers have seen a variety of items containing gold, from standard items like necklaces, bracelets and rings, to dental scrap including gold teeth. “Just about anything you can name that has gold in it,” Minglin said. Once the person brings in the gold, it is separated into piles according to its karat value. It is then weighed and evaluated by the jeweler, Arnold said. Recently, Arnold said he purchased 600 pennyweights of gold in one day, which is approximately 930 grams. The trend of unloading gold jewelry seems to be going strong but jewelers aren’t sure how long values could remain high. However, Arnold said he heard that experts are saying prices could go as high as $1,500 an ounce, and if so, people will likely be cashing in on their old gold for a while. “That is what rumors have said, but that is just speculation,” said Arnold. “Who knows, it is anyone’s guess.” Denise Forsberg can be reached at (574) 732-5151 or via e-mail at denise.forsberg@pharostribune.com

Hardy, Olin “Speed,” 94, of Logansport, a funeral service will be at 10 a.m. today at Gundrum Funeral Home & Crematory, with Jeff Strite officiating.

Gathering to celebrate the life of Paul Wright will be from 4-8 p.m. Wednesday, Oct. 20, 2021, at Amelio's On The River in Logansport.

Lucas, Janet Lee, 86, of Logansport, a funeral service will be at 10 a.m. today at Gundrum Funeral Home & Crematory, with Pastor Dean Snyder officiating.