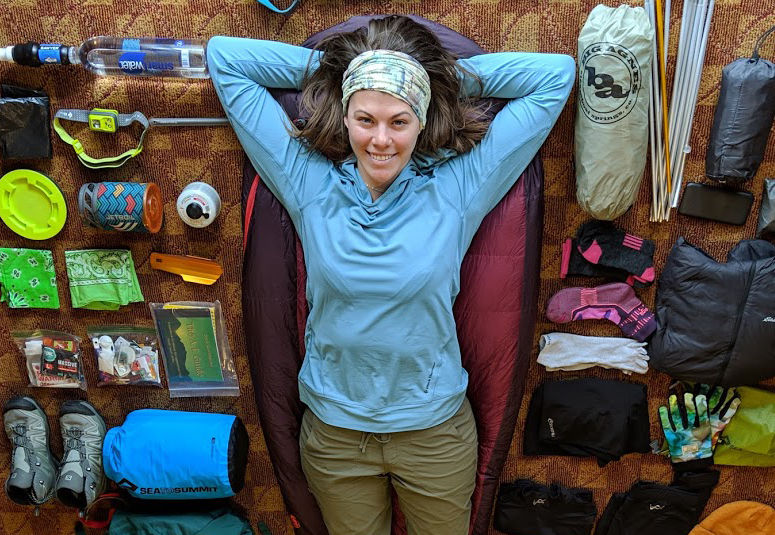 Logansport native Katie Clements carried 25 pounds of gear with her as she hiked the Appalachian Trail for six months. 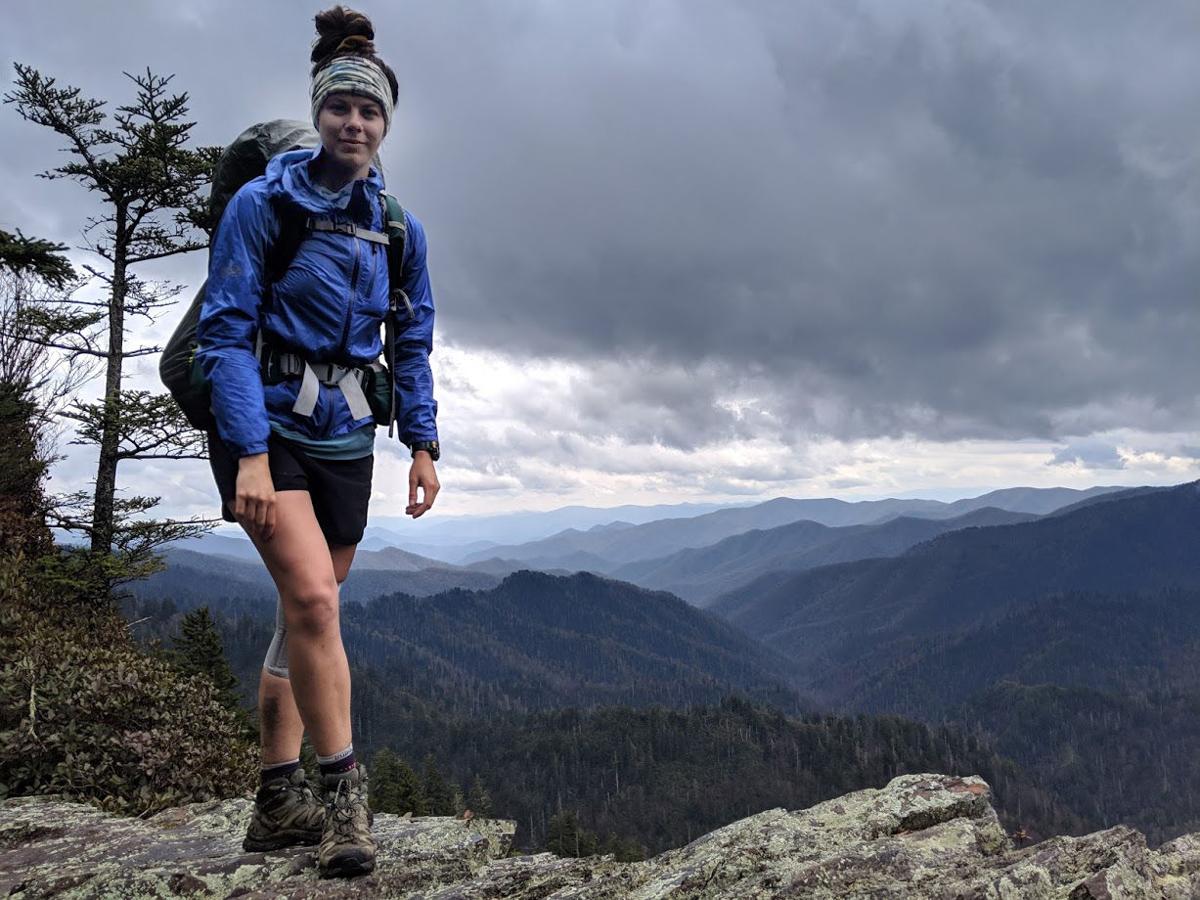 LHS graduate Katie Clements lost 15 pounds while hiking the Appalachian Trail. Her mom mailed a sugar cream pie to her along the way. 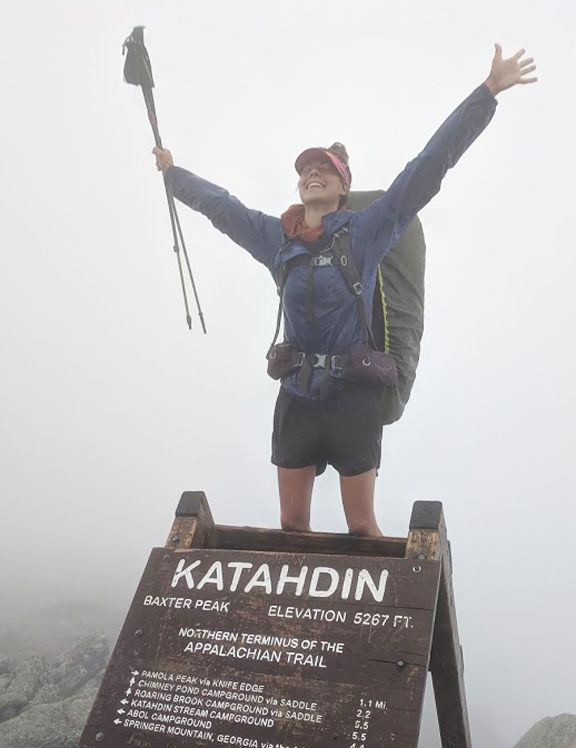 After starting in Georgia on March 16, Katie Clements reached the end of the 2,192-mile Appalachian Trail — the top of Mount Katahdin in Maine — on Aug. 16.

Logansport native Katie Clements carried 25 pounds of gear with her as she hiked the Appalachian Trail for six months.

LHS graduate Katie Clements lost 15 pounds while hiking the Appalachian Trail. Her mom mailed a sugar cream pie to her along the way.

After starting in Georgia on March 16, Katie Clements reached the end of the 2,192-mile Appalachian Trail — the top of Mount Katahdin in Maine — on Aug. 16.

During the six months that Katie Clements walked the 2,192 miles of the Appalachian Trail, one of her favorite times was one of the worst days.

It was snowy, rainy and miserable.

So she headed for the next shelter, as others had done, and they decided to call it an early day rather than go further to another shelter, snuggling in sleeping bags and just hanging out.

The hikers that day were embracing the advice that the 2012 Logansport High School graduate has for anyone who wants to walk the trail themselves — stay positive and live in the day.

“You’re so vulnerable when you’re in the elements. You just have to accept the vulnerability,” Clements said.

However, the most important part is to get started.

Many people she met on the trail were in a transitional phase of life — college graduates, people going through divorces and recent retirees or empty-nesters.

But there is not one type of hiker.

One man was 75, and “there are people that hike with their kids,” she said.

Clements wasn’t in a transition but took the time off her job as an events contractor to do it.

“I’ve been wanting to hike the Appalachian Trail for about five years. I just had a pull to it,” she said.

She lives in Denver, so she had the opportunity to test a lot of her equipment in realistic situations and she researched for a year.

Then she found sponsors for food, which her boyfriend, Matt Wolf, mailed to post offices along the trail for pick up — a common practice.

Clements started the trail going northbound, from Springer Mountain in Georgia to Mount Katahdin in Maine on March 16 and reached the end on Aug. 16.

When she began, there was snow, sleet and hail and a lot of straight ups and downs, but nothing higher than 2,000 kilometers elevation.

There were also beautiful farms and countryside in the south and the Smokey Mountains.

When she got to New Hampshire, Vermont and Maine, the mountains soared to 4,000-5,000 kilometers.

“I started alone, which actually most people do. A lot of people form these trail families — they call tramilies,” she said.

She had about 20 companions during the couple of months.

On the trail, “we all take care of each other,” she said.

When she and another hiker had their food gotten into by black bears — despite hanging the parcels from trees — others helped them out.

There are trail veterans that help new hikers, although the best thing to do is to test your gear before the hike.

“All you carry on your back are the essentials. You realize what really matters. The more you carry, the heavier it is to carry,” she said.

Hers weighed about 25 pounds and included a tent, sleeping bag, food and water and an air mattress.

Part of what she had to carry was her waste — no garbage or human waste should be left along the trail with “leave no trace principals.”

She didn’t carry any books. Instead she had podcasts and playlists she listened to — after lunch only — and had spare batteries.

“In the morning I could kind of be in the present,” she said.

Her cellphone had a GPS app to find the next shelters, but she only called her mom, Cynthi Frye, or her boyfriend once a week.

Everyone on the trail gets a nickname with a story behind it.

She earned it because on March 20, her birthday, someone gave her a bag of peanut M&Ms, her favorite.

There was “Sealegs,” who usually lived on a sailboat; “Frankentruck,” who built his own truck from parts; and “Dankles” for “dog ankles;” as well as “Nibbles,” “Radar,” “Marvel” and a “Ric Flair.”

Because people are known by their trail names, it can lead to confusion, like when some parents were looking for their son, Seth, but no one knew him by that name.

There was also the generosity of people at stops along the trail. They’d offer rides to town and to mail drops, meals and places to sleep, she said.

“It’s nice to know there are such kind people in the world,” she said.

Toward the end, she was mostly on her own, although she ran into “Fumbles” and “Wildcard,” who she’d walked with in the Smokies, about 1,500 miles later.

At one point her boyfriend joined her for part of the hike, too.

“They just say ‘hike your own hike,’” she said. “I just wasn’t on a schedule. That’s definitely one of the best parts about it, is the freedom. Your biggest concerns are shelter, food and water.”

She could take a day off and go into town to do laundry, rest and pick up food — and sleep in a bed.

Or she could spend the day swimming in a lake.

Walking the trail is hard work, though, and problems arise.

You have to hike 10-12 hours a day, in some parts hop over boulders as big as houses, and then you have to get into camp at a shelter and do the day’s chores there to set up camp.

“It’s the best thing I’ve done but also the hardest. You have to take care of your body, but the mental part is the hardest,” she said. “You just get into a routine.”

Food is also a concern, and she had to re-evaluate her projected intake of 5,000 calories a day.

She lost 15 pounds during the hike and had to get a new backpack that fit her.

And at one point, she was beginning to developing an ammonia-like smell and low energy levels that indicate a body isn’t getting enough fuel.

“You’re always hungry,” she said, and there’s no limit on the eating. People are eating Pop Tarts and Honey Buns and all sorts of things all the time.

At the halfway point, it’s tradition to eat a gallon of ice cream. She didn’t because of lactose intolerance.

However, her biggest craving on the trail was McDonald’s, and pie was another big one.

Her mother mailed her a sugar cream pie to one mail drop.

When she had 200 miles left, her grandfather died, which is something she talked with her family about before she began.

“My family told me to stay on the trail and finish it, but I did want to be home with my family. But I also knew I’d feel my grandfather’s presence more on the trail and there wasn’t much I could do there,” she said.

Toward the finish, the hike also got harder because she wanted to rest, and she was filled with emotion as the end of the trail neared.

“I don’t want to wish away the time I was out there, but at the end, I was ready for some rest and to not hike for a bit,” she said.

She plans to stay in touch with people she met on the trail, and they stayed in touch during the hike through texts and social media to follow each other’s progress.

“We shared something so special that a lot of people in the outside world don’t what you’re going through each day,” she said.

She also supports anyone who wants to hike the Appalachian Trail to pursue it as soon as possible.

“There’s never going to be a right time,” she said. “For me it was about making sacrifices to reach this goal that I’ve been wanting for so long. I feel that if you want something bad enough, you’ll do anything you can to do it.”