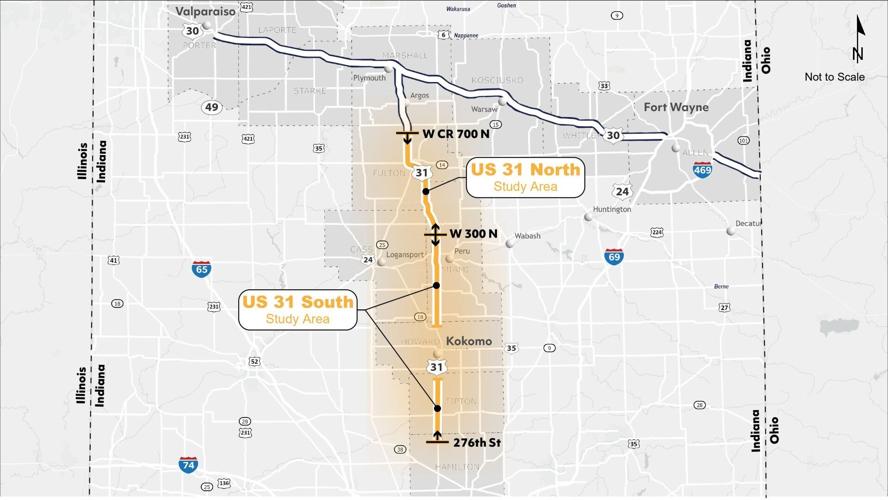 The Indiana Department of Transportation has begun a two year study to determine options for making U.S. 31 between Tipton and Fulton counties more efficient and to identify needs and concerns along the corridor.

The agency held a media briefing last Friday where it formally announced ProPEL U.S. 31, a study that “will use a collaborative approach to consider environmental, community and economic goals” for that stretch of U.S. 31, excluding the Kokomo Bypass in Howard County.

Essentially, the agency is going back to the drawing board regarding improvement plans for U.S. 31 from Tipton to Fulton counties after it received backlash over the last two years, particularly from Tipton County and Miami County officials, regarding proposed improvements, or lack thereof, along the state highway.

The ProPEL U.S. 31 study will follow the Planning and Environmental Linkages (PEL) process used by transportation agencies, such as INDOT, to evaluate ways to address transportation challenges and needs.

The process is expected to take two years and will begin this fall with a “Vision/Scoping” process that will “review corridor history,” “identify baseline conditions” and include the first round of public input. The latter will include public meetings, though specific dates and locations are yet be decided.

That’s to be followed by the “Purpose and Need” portion of the study in the spring/summer of 2023, where the agency will “identify transportation needs,” “develop purpose of improvements” and more collection of public input.

In late 2023 and early 2024, INDOT will “identify potential improvement alternatives,” “identify environmental and community impacts” and take in more public comment before completing the study in the fall of 2024.

According to INDOT, the PEL will likely recommend several projects across the corridor.

“It’s essentially a clean slate,” Natalie Garrett, strategic communications director at INDOT, said. “There isn’t much of anything off the table at this point.”

Previous improvements for the highway included j-turns at various intersections in Miami County and no new interchanges, and only overpasses north of Indiana 28, in Tipton County.

Those ideas did not sit well with local officials, residents and businesses in either of those counties. The Tribune reported in early 2021 that INDOT had abandoned those plans except for an overpass at the intersection of U.S. 31 and County Road 100 South in Tipton County.

Now, with the new PEL study, any major improvements to the corridor are years away.

For more information on ProPEL U.S. 31 or to leave feedback on what you think INDOT should do along U.S. 31, visit www.ProPELus31.com.

In addition to ProPEL U.S. 31, INDOT also announced ProPEL U.S. 30, a PEL study for the stretch of U.S. 30 from Valparasio to Fort Wayne.

Tyler Juranovich can be reached at 765-454-8577, by email at tyler.juranovich@kokomotribune.com or on Twitter at @tylerjuranovich.