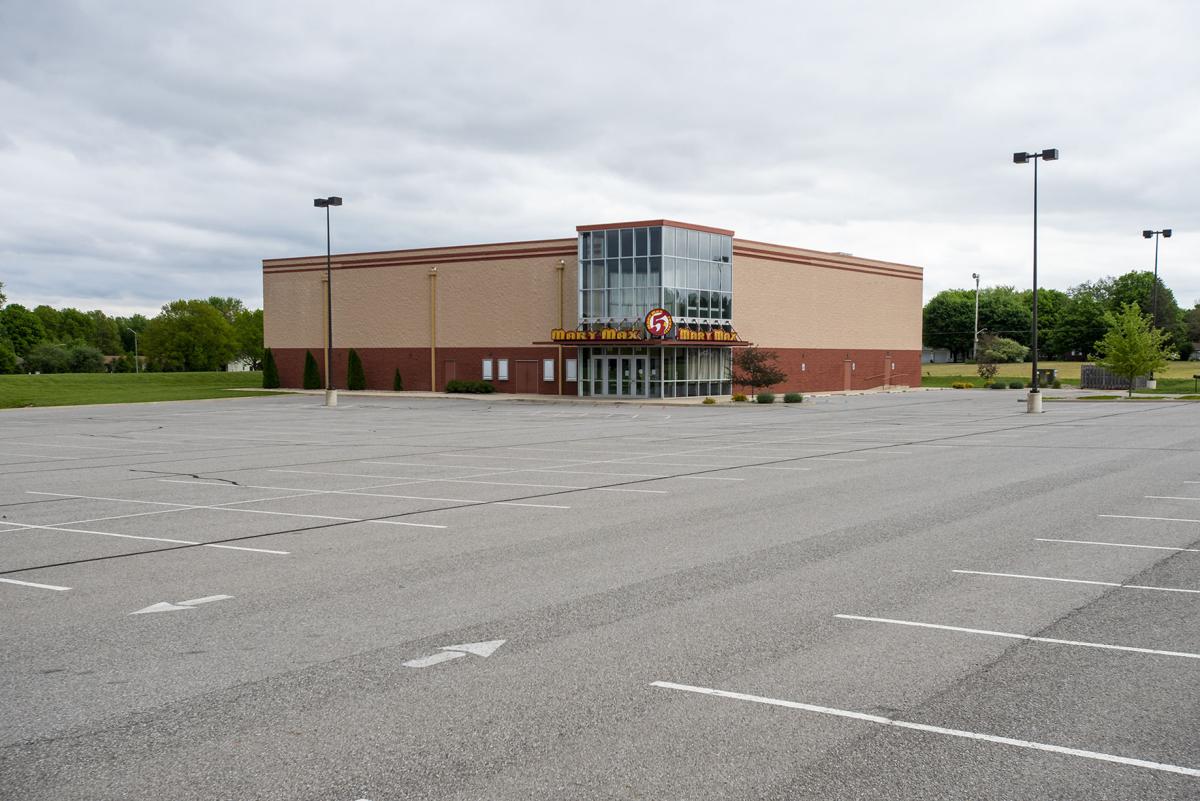 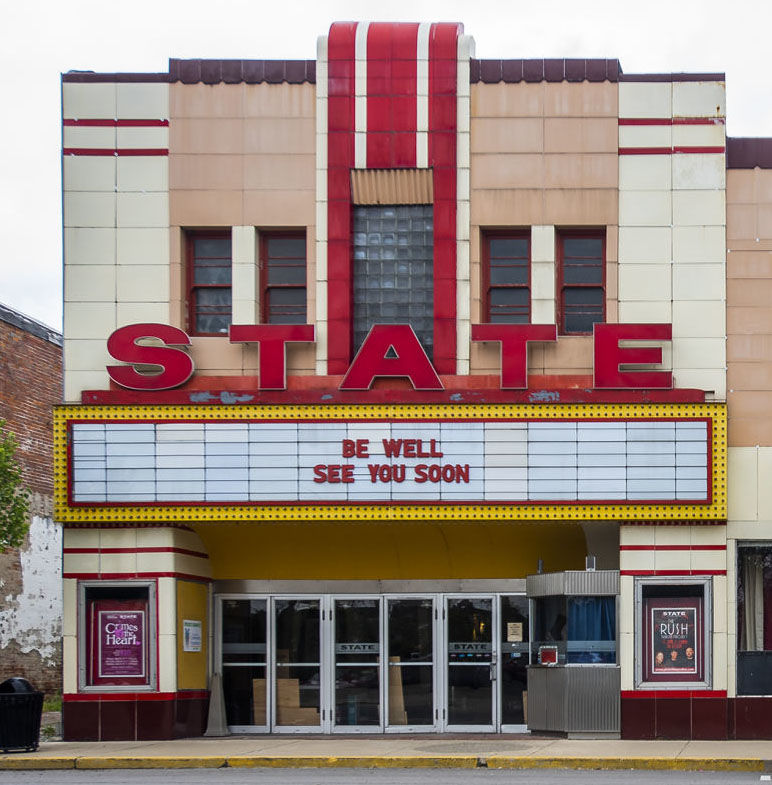 The marquee at the State Theatre read “Be well. See you soon,” as posters for canceled shows remain on display. 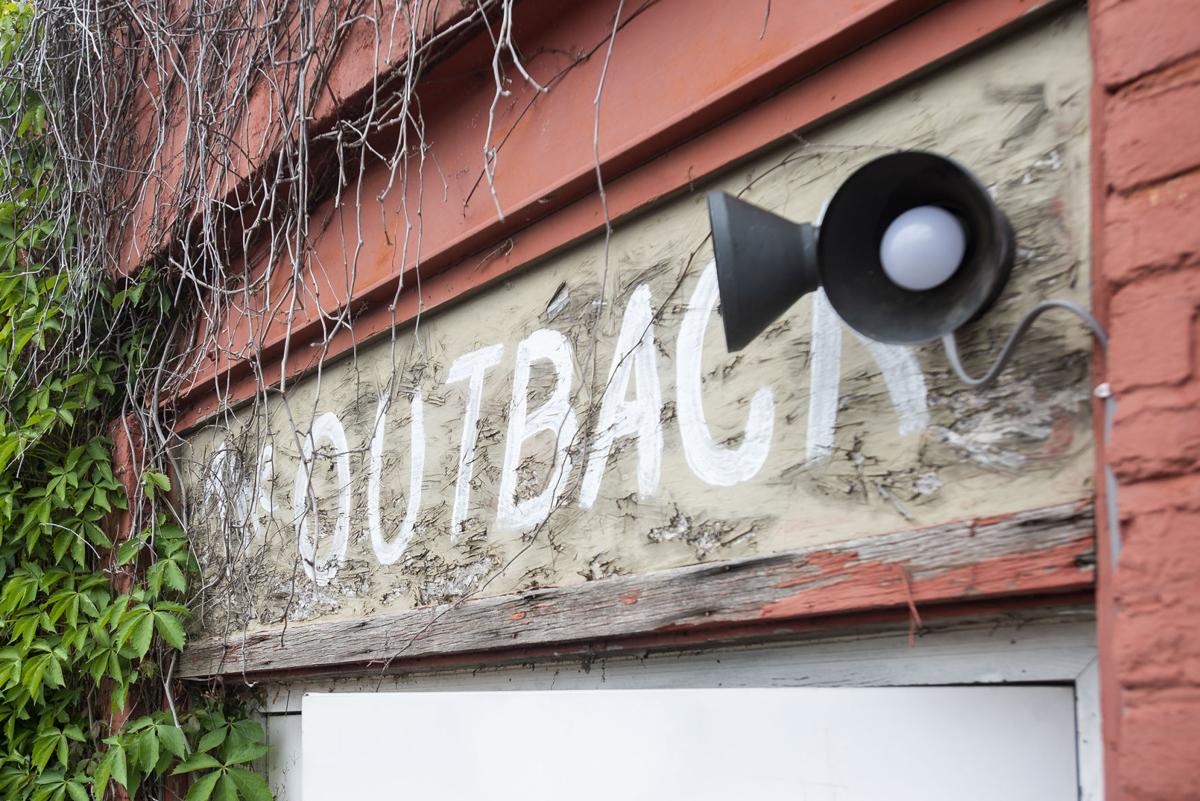 New lights have been installed in the back deck area of Amelio’s On The River.

The marquee at the State Theatre read “Be well. See you soon,” as posters for canceled shows remain on display.

New lights have been installed in the back deck area of Amelio’s On The River.

With Stage 2 of “Back on Track Indiana” in effect since Monday, Cass County restaurants and retail can open up to 50 percent of capacity, offices and manufacturing are open with restrictions and personal services businesses like barbers, spas and tattoo parlors can restart business by appointments only.

However, some businesses are still waiting to be able to open — including bars (that don’t serve food) and nightclubs, entertainment businesses (movies, theaters and community pools) and schools.

Stage 3, which Cass enters June 1, will allow gyms to open, but the other businesses still need to wait for Stage 4 at a still unconfirmed date for the county. Owners and managers of those businesses have mixed reactions to the rules and the longer wait for Cass, but they agreed their businesses have suffered.

“I am disappointed. I thought since our numbers [of new cases] went down that we’d be able to catch up with everybody,” said Shooters Bar and Grill owner Julia Lowe. “It’s already hurt business.”

Bar and grills, which serve food, can open to 50 percent capacity, but no one can sit at the bar. She thinks that doesn’t make sense because you can have four people at a table but only a single person on either side of you at a bar.

Paul Ulerick, owner of Amelio’s On the River, said, “They’re just kind of odd rules.” His business has both a restaurant and bar.

“I just can’t open halfway. We can’t afford it,” he said. “When I turn the grill on, whether there’s one customer or a full house, I still pay the same for utilities.”

He also has the two-year construction on Melbourne restricting parking and traffic, but he plans to open outside dining in June. A big concern, though, is whether he can provide food.

Vendors tell him that things have backed up in the food supply chain, and even butchers are too busy. Ulerick has stocked up his freezer on hamburgers, but pork loins will be slowed.

Burton’s Bungalow Bar and Grill will open May 25.

“I’m really excited we’re going to open Monday,” said Jan Burton, who owns the business with husband, Jeff. They decided not to apply for aid for businesses, so the ability to seat 50 people will help, she said.

Polsinelli’s Bar & Grill sent a message response via Facebook to the Pharos-Tribune’s inquiry into their status.

“I put my customers first and my bartenders [first], if they are not safe, I won’t be the one to put them in danger,” said owner Mary Pearson. “My business is suffering, but without my family (customers), I wouldn’t be in business.”

Terri Costello of the Sub Tavern said that her bar, The Neighborhood Tavern and the R-Bar would be closed until Stage 4 hits Cass County because they don’t serve food.

Costello, who owns the Sub with husband, Jim, said she’s finding it difficult to follow the rules because they seem to keep changing.

Although Stage 4 is supposed to happen June 14 across the state and there are indications that Cass may “catch up” to that stage, the Costellos are not restocking the Sub.

“We are waiting for a week before we open,” she said. They will be able to seat 25 people at half capacity when that happens.

Madyson Clem, bar manager of The Neighborhood Tavern, stated, “of course this push back hurts business, but we understand that this is the result of Cass County’s numbers being so high.”

“We are just trying to stay patient and positive because there’s nothing else we can really do at this point. We are paying attention to the ever-changing guidelines and dates set forth. We want to provide the safest possible environment for our patrons and employees when we are able to return, so we will wait,” Clem said.

Some businesses are staying cautious and sticking with strategies.

Mary Max Theaters already planned not to open until July 1 because that’s when studios will distributing movies again.

“We can’t be open with older movies,” said Mary Max Manager Richard Dieffenbach. He said they won’t bring in the audience.

He’s watching his friends in the industry in New York, Los Angeles and Chicago for what happens when they open May 25. However, given that movies are a global industry now and studios make money on highly populated countries like China and India, new movies may not be released if those countries remain under quarantine, he said.

For the nonprofit State Theatre in downtown Logansport, the timing of the lockdown hit hard. The theater had a handful of shows remaining in the season, which generally ends on Memorial Day. The volunteers take summers off for construction and maintenance projects and the private parties, such as class reunions and graduation parties, that help cover utility costs over the summer.

“We had just restocked the bar and concession stand for the last portion of the season,” said Kevin Burkett, CEO and President of the State Theatre Preservation Society. “We canceled two concerts, a Civic Players of Logansport show and two free movies that we hoped would put money in the bank as we enter the summer shutdown. When COVID-19 hit, we basically lost all of our bar and concession stock. Fortunately, we were able to donate our Pepsi products and candy to the Emmaus Mission.”

The State Theatre’s next season doesn’t start until September, so it will be at least three months before it can start regular programming. The theatre plans to present Civic Players of Logansport’s production of “Crimes of the Heart” over the summer. The show was scheduled to run for three days in March but had to be postponed just 24 hours before opening night.

In the meantime, Burkett said the theatre is undergoing deep cleaning and continued restoration work. And they will be presenting a series of Facebook Live videos of local bands from the stage of the theatre with options to donate to the nonprofit.

Burkett is an unpaid board member for the nonprofit organization that operates the State Theatre. He is also the editor of the Pharos-Tribune.

The Cass County Family Y will stay with its original plan to open June 8 at 5 a.m. instead of opening June 1 to train staff on new measures, said Brandy Kizer, marketing and membership director.

At first, entry into the building will be limited to “members, punch card holders, and those who have access through insurance programs such as SilverSneakers, RenewActive, and Silver&Fit, according to a press release from the YMCA. They’ll also have no childwatch and will allow no children younger than 16, and no one guest passes.

People entering the YMCA will have their temperature checked and a quick verbal health screening at the door.

The Pharos-Tribune also attempted to contact The Dutch Mill, The Avenue, the R-Bar and Chevi’s for this article but were unable to reach them. The Dutch Mill plans to re-open May 25, according to its answering machine.