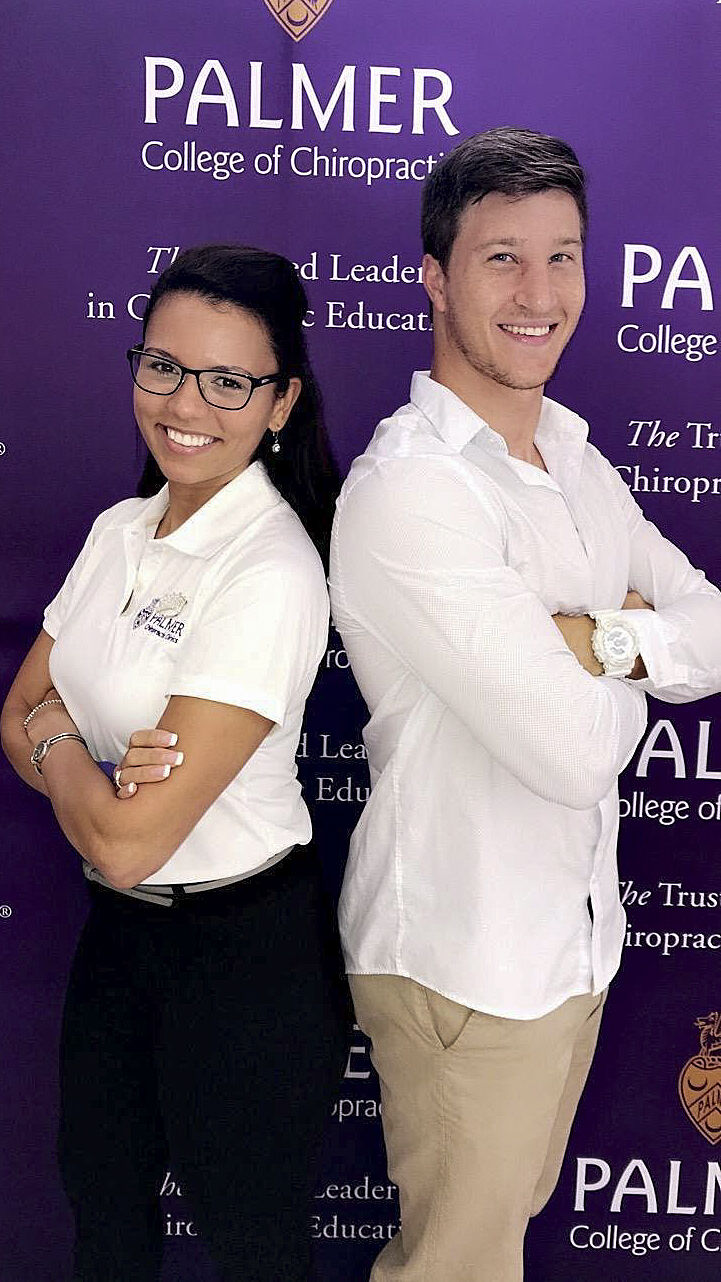 Dr. Erica Beltre, left, poses back-to-back with her fiancé Dr. Tyler Graham. The couple, who met at Palmer College of Chiropractic, are the new associates at Phipps Chiropractic. 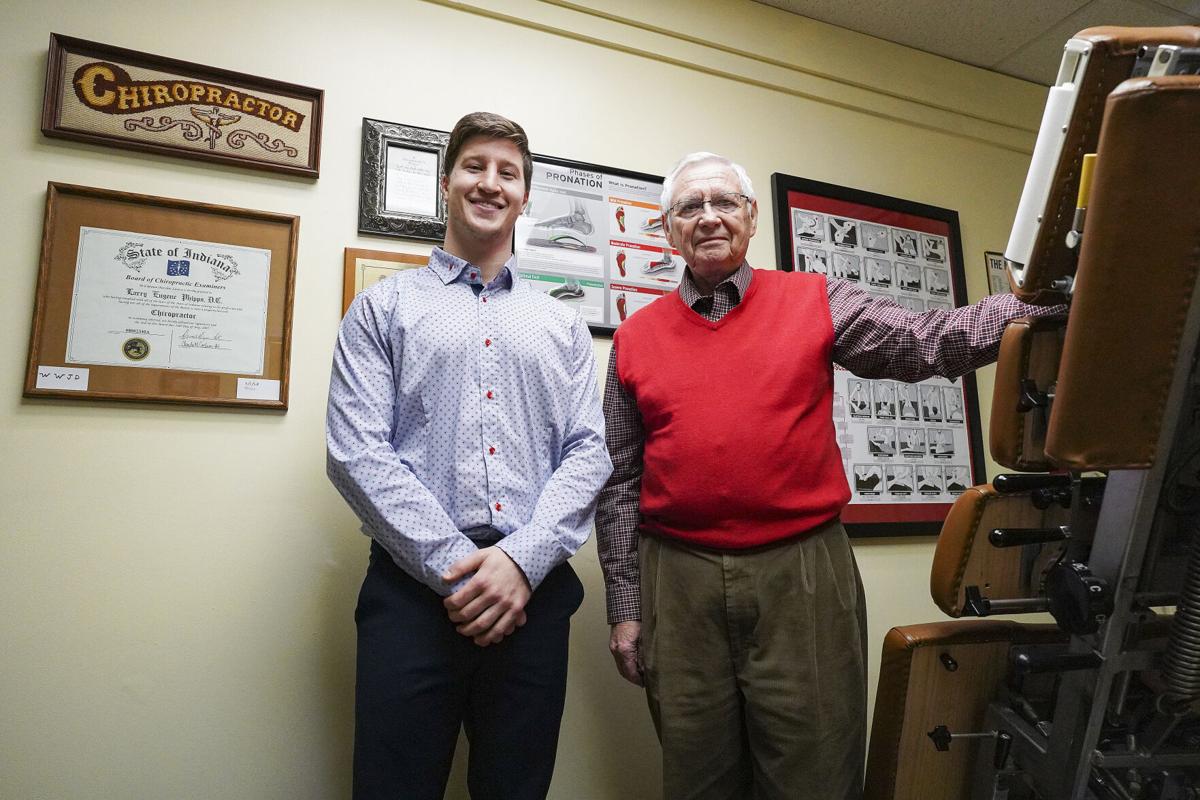 Dr. Tyler Graham, left, poses with Dr. Larry Phipps at Phipps Chiropractic on Tuesday, Jan. 5, 2021 in Logansport. Graham is one of two new associates at the business — the other being his fiancé Dr. Erica Beltre.

Dr. Erica Beltre, left, poses back-to-back with her fiancé Dr. Tyler Graham. The couple, who met at Palmer College of Chiropractic, are the new associates at Phipps Chiropractic.

Dr. Tyler Graham, left, poses with Dr. Larry Phipps at Phipps Chiropractic on Tuesday, Jan. 5, 2021 in Logansport. Graham is one of two new associates at the business — the other being his fiancé Dr. Erica Beltre.

There are two new faces at Phipps Chiropractic Center, 16700 W. Market St., and they plan to take the business over when Dr. Larry Phipps retires.

Tyler Graham and Erica Beltre are graduating from Palmer College of Chiropractic in Davenport, Iowa, in February, and Graham is doing his preceptorship — similar to an internship or apprenticeship — in the clinic.

Beltre, who concentrates in pediatric care, will do hers when his finishes.

This is the second official retirement for Phipps, who moved to the Logansport area 11 years ago with his wife, Annette (nee Schlegelmilch), after retiring from his practice in Iowa.

“I just practiced part-time, and it kept growing,” Phipps said. “I love what I do, and I really did not want to retire.”

However, he needs to slow down because of his health, and he’s planning on taking a month off when the couple are up to speed.

“I’m trying my best to get Tyler and Erica both to do adjustments the way I do,” he said. “And we’re teaching them fast.”

The couple wanted to work with Phipps because he specializes in working on extremities.

Graham found out that Phipps was looking for an associate through a flyer Phipps had spread around the campus during a trip to Iowa for a Certified Chiropractic Extremity Practitioner seminar.

Graham was at a similar seminar in Texas at the time, but when he saw the flyer in a group text, he thought that he’s the only person he knew at Palmer from Indiana.

He wanted to be closer to his hometown of Granger, northeast of Logansport, but Phipps specializes in the body’s extremities, which is where Graham wants to concentrate.

And Graham found that Phipps is highly praised in the profession.

“There are different chiropractic techniques, and what he does is very specialized,” Graham said.

They estimated there are about 2,500 in that field.

“It is a very specialized subset of the profession,” said Phipps, who has advanced degrees in treating extremities, in orthopedics and in x-rays.

A lot of what he does involves feet, which he said are the base of the body and the source of many problems when things aren’t right.

Four potential associates applied for the position, but Phipps knew that Graham was the one he wanted after 10 minutes.

“It wasn’t a hard choice,” Phipps said. “He was interested in extremities. That’s what sold me on him.”

For the couple, it also seemed a good fit.

Beltre said, “we’re pretty much the same, and that’s why we chose Dr. Phipps. We know where he’s coming from. And we just felt it was the perfect fit for us.”

She also sees the opportunity here.

“Right away it clicked — this is the guy I want to work for,” Graham said. “He’s thorough and caring.”

That meant hurrying up to get paperwork into the state for the preceptorship and trying to find a house in the Logansport market from five hours away.

The process happened in such rapid succession, they moved in on a Friday and started work on Monday.

“Things have been quick, but I’m happy the way did they,” he said. “People here have been kind and accepting.”

Although Beltre is now graduating from chiropractic school, she has seven years of history in the field.

The Massachusetts native worked as a chiropractic assistant in Melrose, a small town near Boston, according to her official biography.

Her hands-on experience gave her a love for the field.

She graduated from Salem State University with a degree in biomedical science and at Palmer concentrated in advanced muscle palpation and studied various other paralleled techniques such as extremity adjusting, Gonstead and diversified.

She and Graham are expecting their second daughter in April.

Graham’s father and grandfather were osteopathic physicians in Osceola, but he knew the holistic healthcare field and the chiropractic manipulative therapy approach were better suited for him.

He has no problems with osteopathy but believes that with chiropractic treatments, “it’s just a good alternative route and probably more affordable,” Graham said.

He graduated from Indiana University in 2017 with a Bachelor of Science in biology and chemistry.

At Palmer, he became skilled in extremity adjustments, orthopedic and neurologic examinations, gait and postural analysis and spinal manipulation, as well as satisfactory patient interactions.