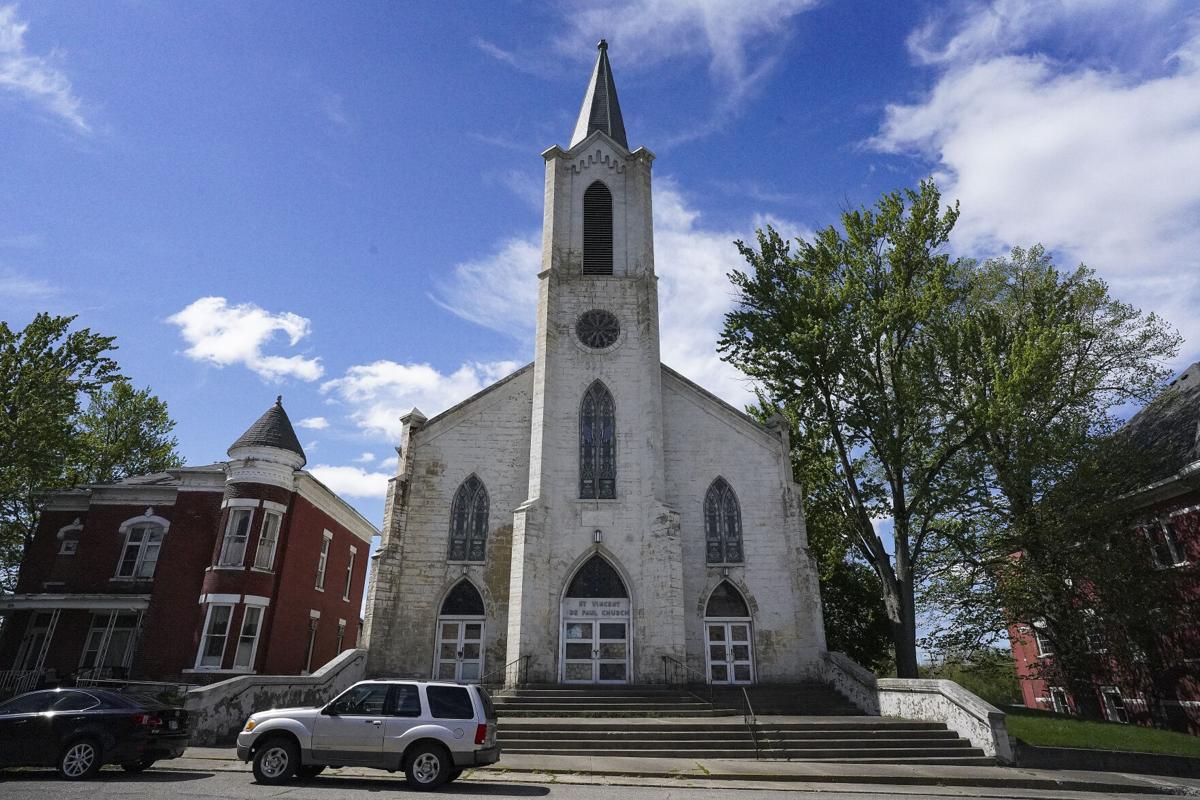 The former St. Vincent de Paul Catholic Church is seen along the 800 block of Spencer Street on Wednesday, May 5, 2021 in Logansport. 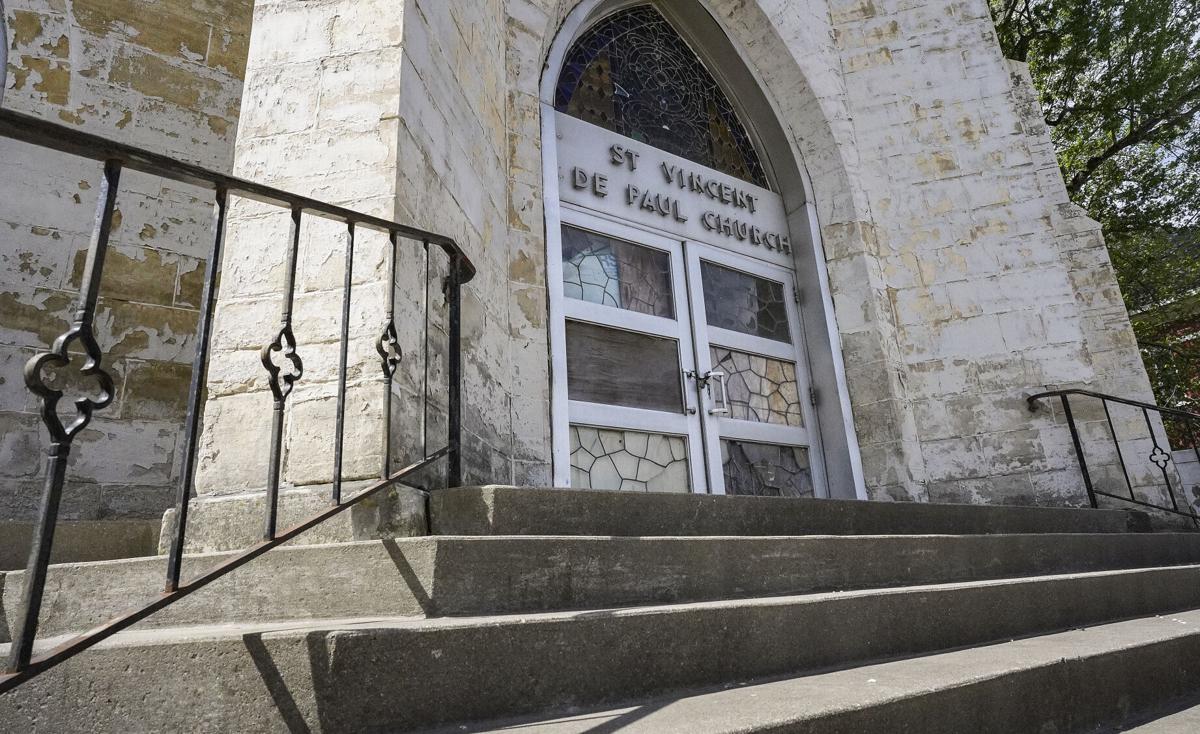 The boarded up doors of the former St. Vincent de Paul Catholic Church. 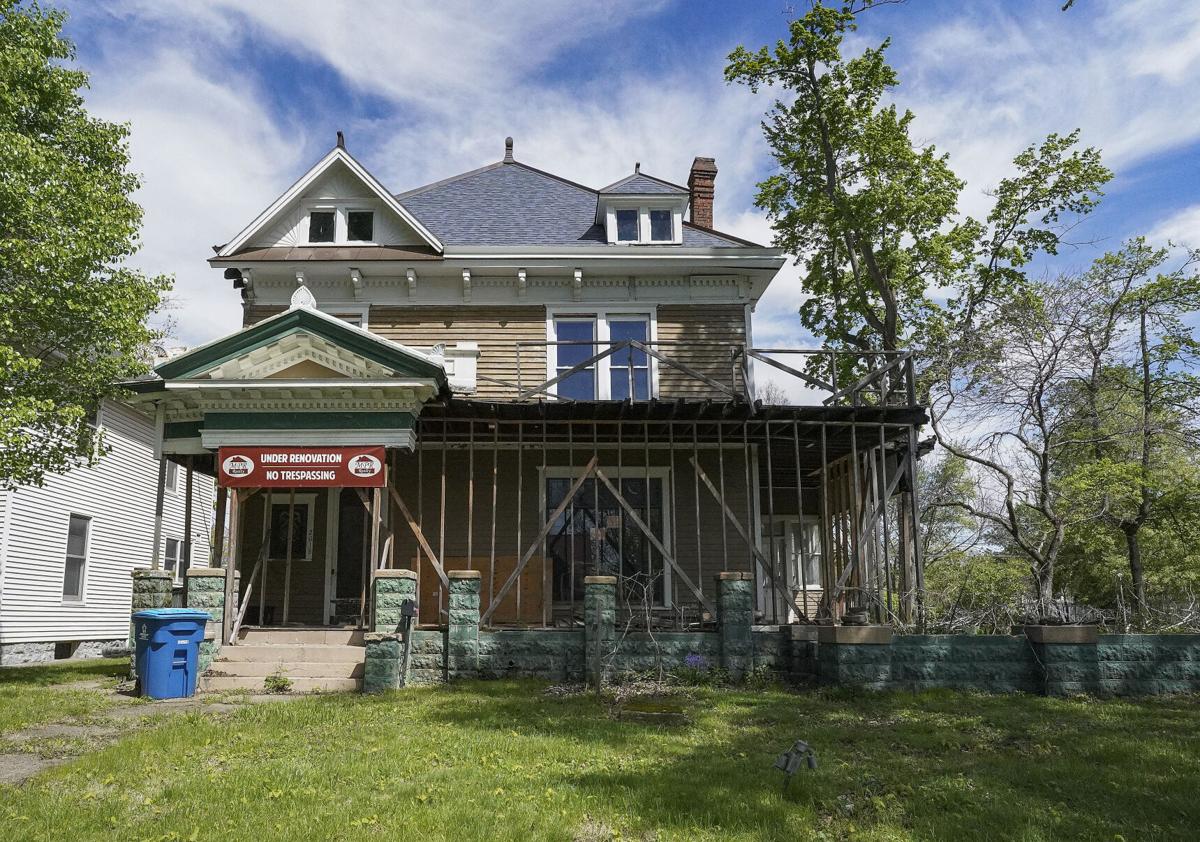 The home at 2108 North St. as seen on Wednesday, May 5, 2021 in Logansport. The construction, including the removal of its colonnaded porch, has ceased, and its building permits have expired. 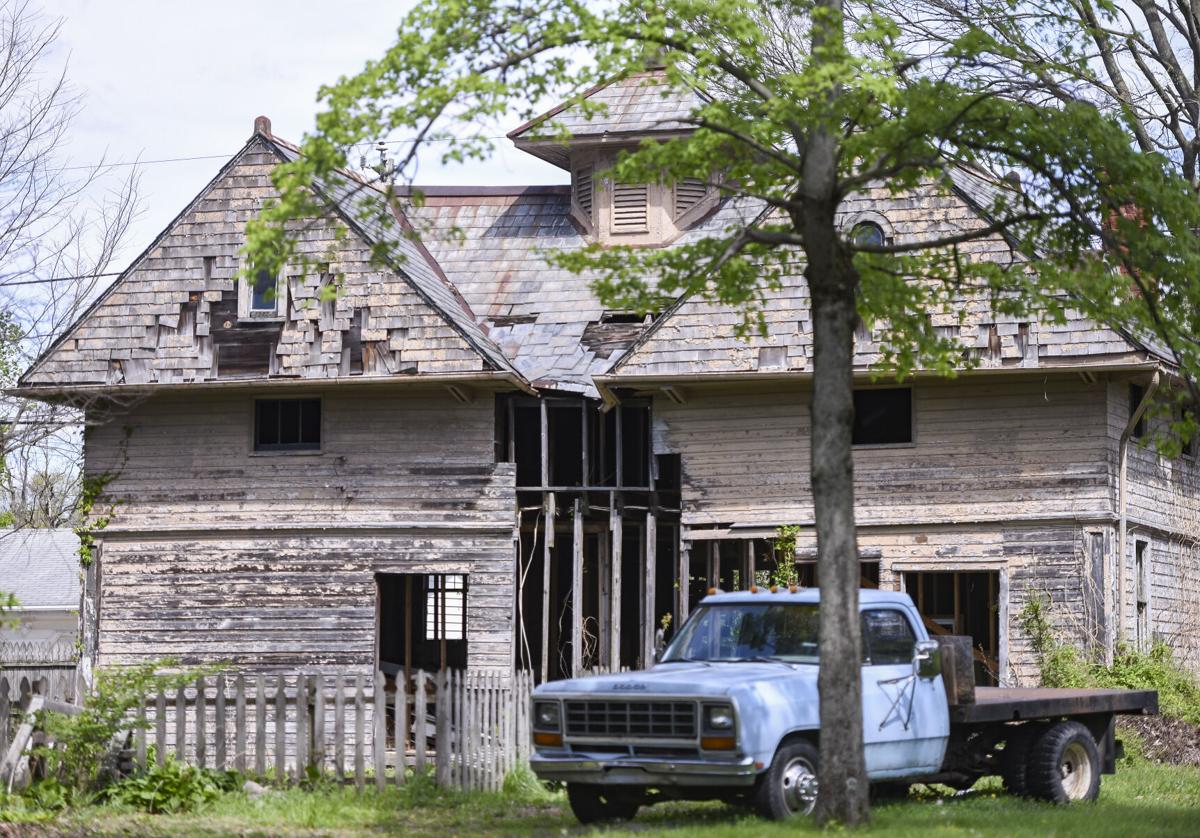 The carriage barn behind the home at 2108 Spencer St. Portions of it have collapsed. 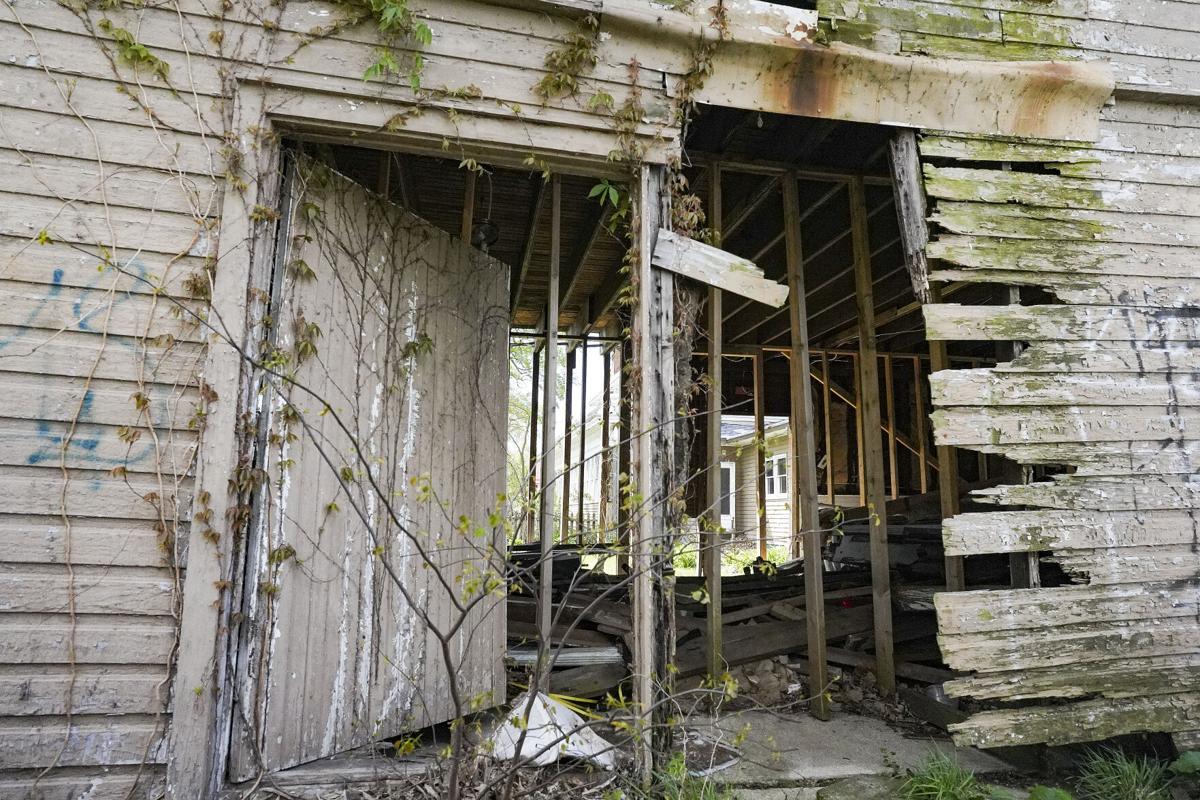 The back portion of the carriage barn at 2108 North St. 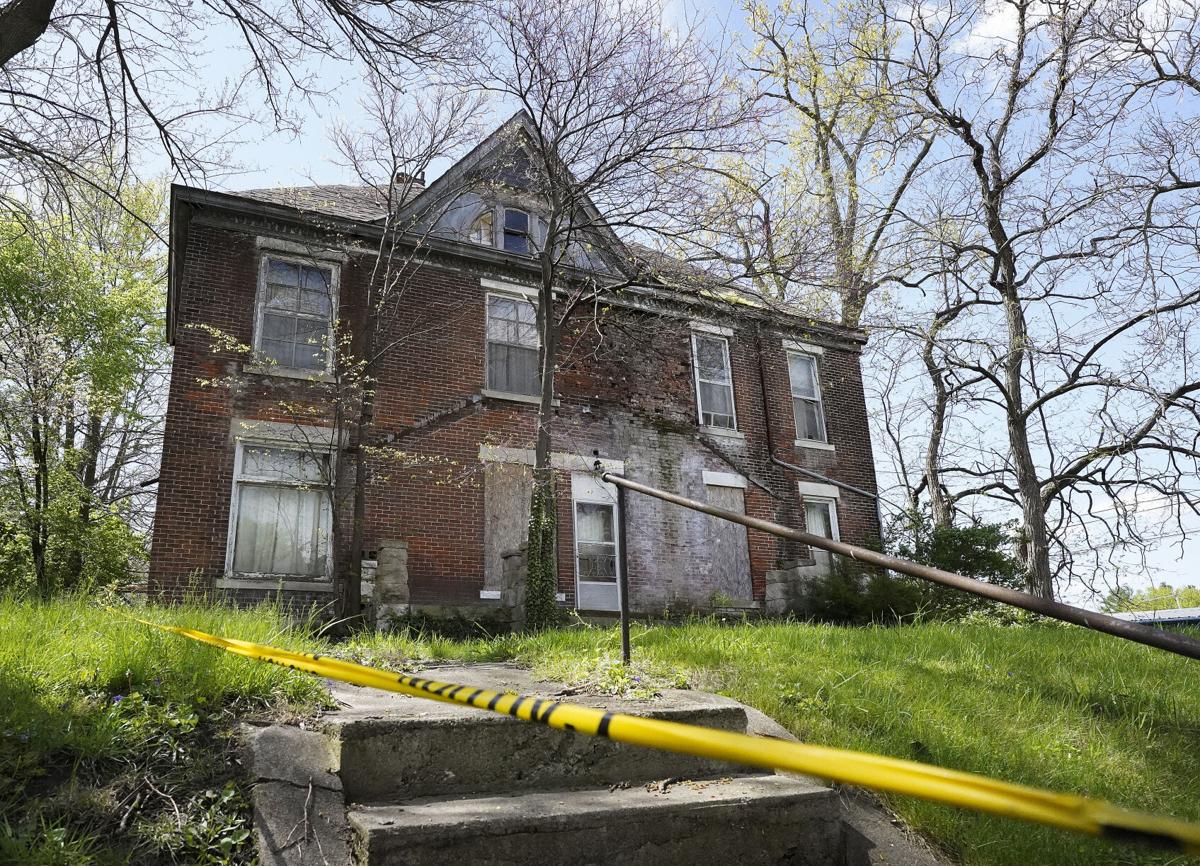 The former St. Vincent de Paul Catholic Church is seen along the 800 block of Spencer Street on Wednesday, May 5, 2021 in Logansport.

The boarded up doors of the former St. Vincent de Paul Catholic Church.

The home at 2108 North St. as seen on Wednesday, May 5, 2021 in Logansport. The construction, including the removal of its colonnaded porch, has ceased, and its building permits have expired.

The carriage barn behind the home at 2108 Spencer St. Portions of it have collapsed.

The back portion of the carriage barn at 2108 North St.

The preservation group Logansport Landmarks released this year’s list of the most endangered buildings for Historic Preservation month.

Some of the buildings are familiar because they’ve been on the list before.

The former St Vincent de Paul Catholic Church, now owned by the Emmaus Mission, has been on the list since it began in 2016. The organization bought the property that includes the church building, rectory and former school in 1994.

Emmaus Director Jason Mitchell said the church could be off the list by next year.

“We’ve had in the works a potential buyer for that property,” he said.

The buyer looked at the 161-year-old church last year and confirmed last month that he was still interested, although he’s also concerned about the effect COVID-19 had on his other businesses.

He would want it for some sort of business opportunity and had considered a CrossFit gym, Mitchell said.

If that buyer doesn’t come through, Emmaus has also been talking with Indiana Landmarks about listing it for sale with that organization.

Mitchell also talked with Logansport Building Commissioner Wayne Erwin about updates in building codes to inform potential buyers, and Emmaus’ Board will address the building at its next meeting.

Emmaus will not let the bethel “stay put,” Mitchell said.

Others properties have been taken off the Most Endangered list because of improvements or demolition.

The Greensfelder house at 806 E. Market St., which Cass County had actually condemned, is off this year because it’s been bought and undergoing renovations, according to Logansport Landmarks’ Communications Director Paul Willham.

Willham stated that while some properties have been on the list for years, the list seems to have made an impact and has drawn national attention for local historic properties.

“There are many bright spots in Logansport preservation efforts,” he stated. “Numerous homes have been purchased throughout the city, and homes that have not received attention in years are now on a pathway to restoration.”

That’s millions of dollars invested in the city and property values continuing to increase, he added.

Logansport has lost the “blight equals bulldozer” mentality it had, “and the city government seems to realize that these properties have value,” Willham stated.

Logansport Mayor Chris Martin, who has been preservation-minded, has seen the list, including The Cass County Memorial Home, which is jointly owned by Cass County and Logansport.

“Our administration will be working on the ‘endangered list’ and focus on preservation,” Martin stated by email. “We are currently working with Cass County on a solution for the Memorial Home that does not include demolition. We encourage public input and support for preservation in the city and would like this information given directly to our office so we can assist in any way we can.”

Here is the list of the 2021 Logansport Most Endangered homes:

Logansport Landmarks describes it as “in serious condition, and immediate attention is required if this local and national landmark is to be saved.”

The list identifies the building as a “prime example of ‘frame corner store architecture’” and states it has been neglected for more than a decade. It’s in violation of city ordinances and needs serious intervention, according to Logansport Landmarks.

This was put on the list in 2017.Cass County and Logansport are supposed to share costs of upkeep for this World War I memorial, dedicated in 1922. The county and city have been going to court over the shared responsibilities for a few years.

“This property received national attention after it made our most endangered list in 2016,” the list states. “The property was eventually sold to an out of town buyer, and work began, including the removal of its iconic colonnaded porch for restoration.All work has stopped on this property, and its building permits have expired.”

This was added to the list in 2017. Nathan McCain of Indianapolis said his Wabash1 LLC company bought this building at a tax sale Feb. 12, 2018.

Although it’s listed for sale, McCain is still considering fixing it up in spring 2022 but also looking for buyers who’ll restore it and had turned down someone wanting to convert it to apartments.

823 Market St.This was added to the list in 2018.“This grand old home suffered a front porch collapse in 2018, and while that has been removed, the home continues its downward decline,” according to the list. “Without new ownership this property, significant in architecture and history, is very much in danger of future demolition.”

Robertson, Alyce 'Lynette,' 92, of Kokomo. A celebration of life service will be at 1 p.m. Friday, at Blueball Church/ Community Bible Church, with visitation hours from 11 a.m. to 1 p.m. In honor of Lynette, the family asks that attendees wear their favorite Cass High School apparel or scho…