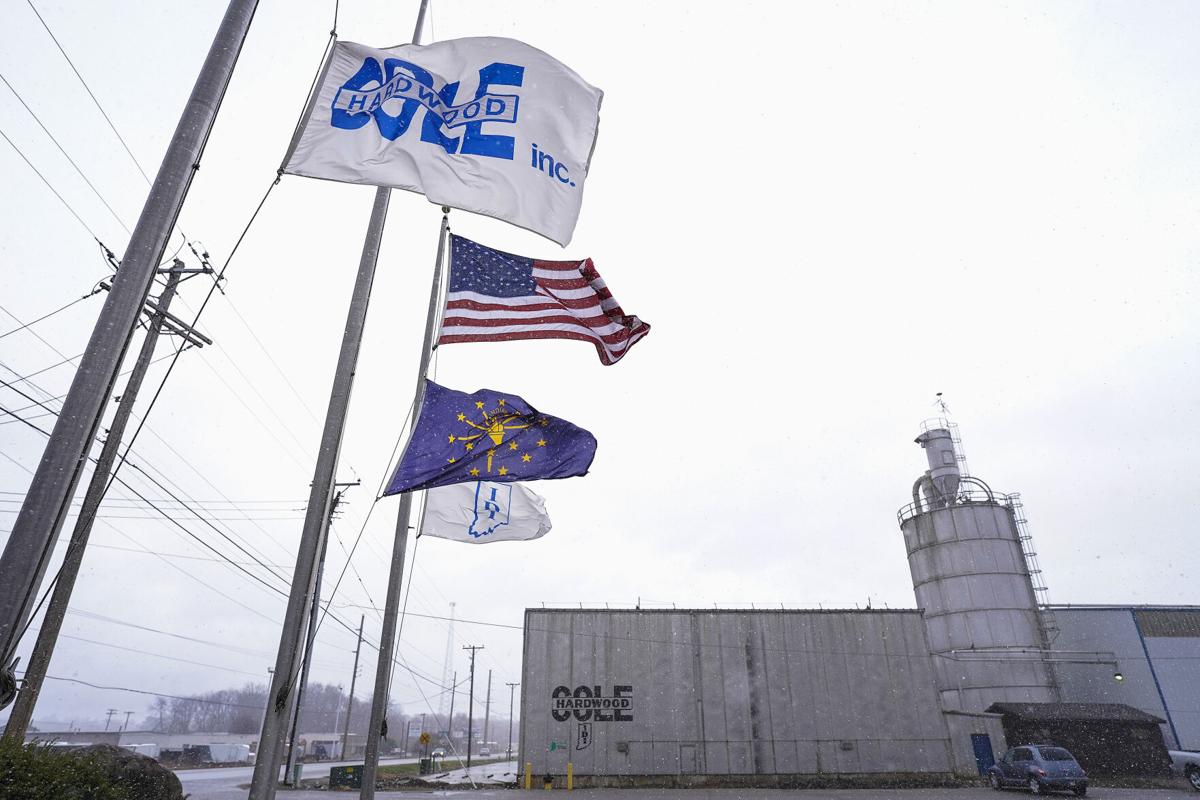 After the death of Milt Cole on Thanksgiving Day, flags at Cole Hardwood fly at half-staff on Monday, Nov. 30, 2020 in Logansport. 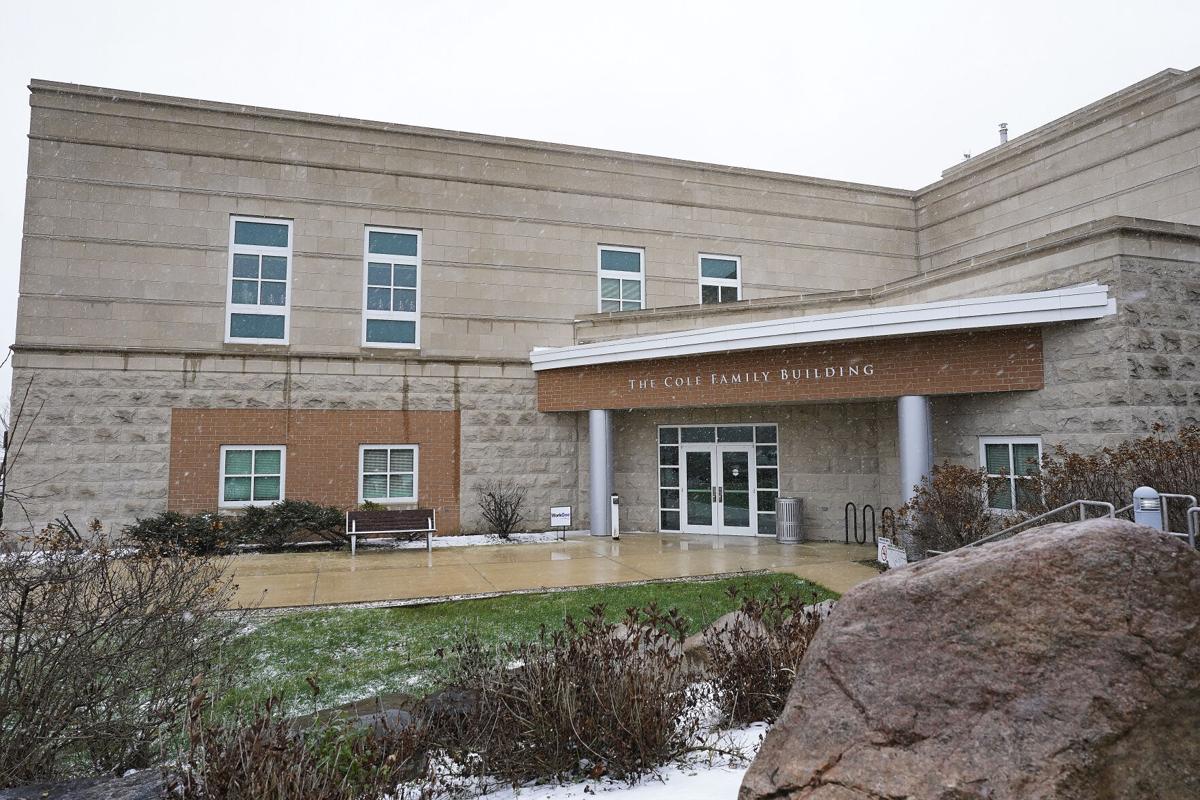 Snow falls outside of The Cole Family Building at Ivy Tech Community College on Monday, Nov. 30, 2020 in Logansport. The building was named after Milt and Jean Cole. 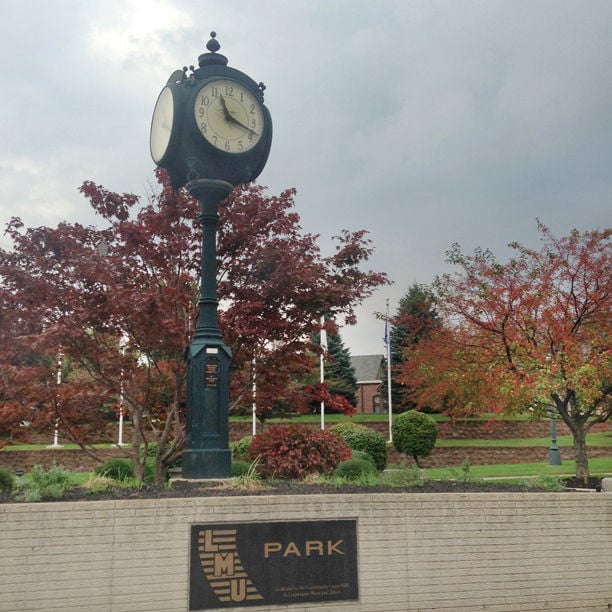 Milt and Jean Cole continually gave back to the community. An ornate clock tower, the cornerstone of the LMU Park at the corner of Sixth and East Market streets, was donated in 1998 by the Coles. 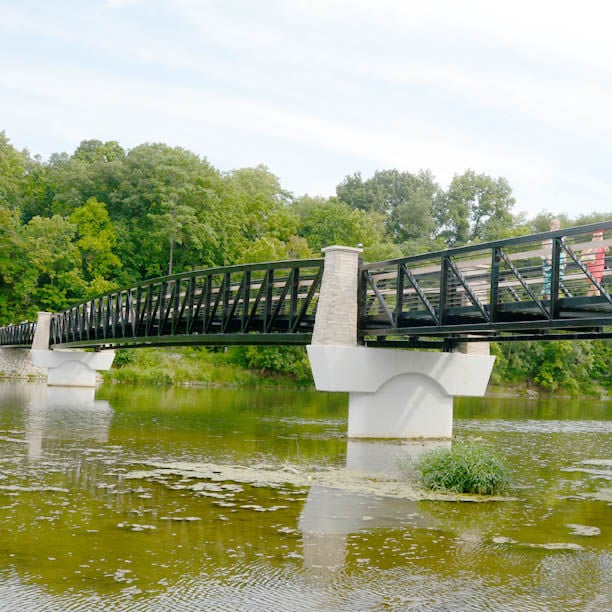 On the north side of Riverside Park in Logansport, the Cole Pedestrian Bridge spans the Eel River. It’s named for Milt and Jean Cole and their family, who helped fund the project. 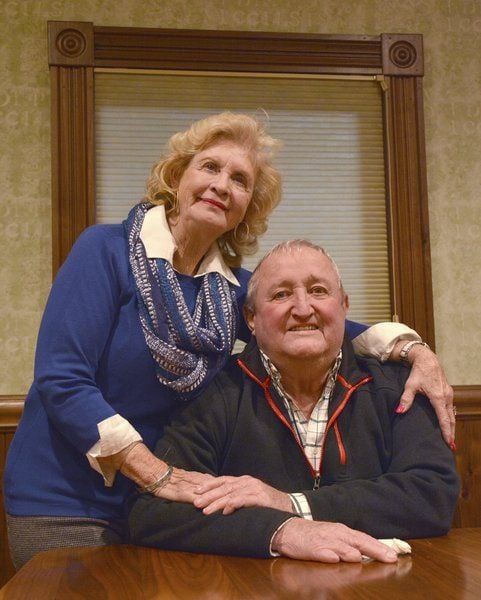 Milt and Jean Cole, owners of Cole Hardwood and Indiana Dimensions Inc., were named 2014 Business Couple of the Year by the Logansport-Cass County Chamber of Commerce.

After the death of Milt Cole on Thanksgiving Day, flags at Cole Hardwood fly at half-staff on Monday, Nov. 30, 2020 in Logansport.

Snow falls outside of The Cole Family Building at Ivy Tech Community College on Monday, Nov. 30, 2020 in Logansport. The building was named after Milt and Jean Cole.

Milt and Jean Cole continually gave back to the community. An ornate clock tower, the cornerstone of the LMU Park at the corner of Sixth and East Market streets, was donated in 1998 by the Coles.

On the north side of Riverside Park in Logansport, the Cole Pedestrian Bridge spans the Eel River. It’s named for Milt and Jean Cole and their family, who helped fund the project.

Milt and Jean Cole, owners of Cole Hardwood and Indiana Dimensions Inc., were named 2014 Business Couple of the Year by the Logansport-Cass County Chamber of Commerce.

The flags outside Cole Hardwood are at half-staff to recognize a loss not just to the business, but to the family and the friends of William Milton “Milt” Cole.

His death on Thanksgiving is also a loss to the community that he generously gave to, adding his support to education, historic sites and civic groups.

Many recalled a saying he had about his philosophy, which was also quoted in an Ivy Tech publication: “We’re all on this stairway, and no one reaches the top without reaching out to others. If you will reach back and help someone who is a step or two behind you, you not only elevate yourself and that person, you elevate your local community and society in general.”

“He’s given back all his life. He said Logansport was always good to him,” and he wanted to repay that, Keith said.

Milt and his wife Jean Cole’s generosity of $1 million in 2008 toward the new Logansport Ivy Tech campus led others to making contributions, and the building is named for the Cole family.

“He inspired other people in the community to give,” said Ivy Tech Chancellor Emeritus Steve Daily. “That multiples your gift many times over.”

She recalled him saying, “We had so little money, all we could afford was a good attitude.”

Working in his father’s sawmill, he lost two fingers, and his father said he might as well go to school to learn how to grade hardwood.

The owner of John I. Shafer Hardwood in Logansport met him and wanted to hire the newly-married Milt Cole. Milt didn’t want to come to the cold north, but Shafer offered more money, Jean said.

After working at the lumberyard for a while, the couple began buying farmland in the early 1970s, starting with a Christmas tree farm where their second house was located.

He used that to leverage, buying the hardwood company in 1986 and then continued to buy more farm land, Keith said. Milt told Jean that God told him to buy farmland.

With the holiday, “he got to see his family before he left that night,” Keith said

Milt became known nationally in 1998 when a fire went through the lumberyard, and he rebuilt larger instead of walking away. The media all carried: “Milt Cole said no one would miss a paycheck,” Jean recalled.

His other son, Randy Cole, said, “He was a very talented man. He was blessed with immense common sense, and he was a hard worker — and he loved humanity.”

He was the rock of the family, Randy said.

That extended outside the family, too. “I probably have more brothers than you’d know,” said Keith. “A lot of men think of him as a father.”

“He was the epitome of optimism, one of the main mentors of my life, for sure,” Oilar said. “Like a father figure, he led firmly but compassionately.”

Oilar said Milt taught him to “lead with love because he loved everybody.”

People in the industry still say they remember when they first met Milt, he added.

Sales Manager Dave Bramlage, who knew Milt sine 1979, said, “Milt was a leader far beyond Cole Hardwood. He was loved nationally by people in our industry. [Milt was] the most compassionate man and generous man I’ve ever known in my life. He lived by that and never changed.”

Deanna Crispen, president of the Cass County Community Foundation, had known Milt since she was 9 years old.

“His impact on my life personally is immeasurable,” Crispen said. “He was loyal, a mentor, supporter, honest listener and always inspiring me but with the expectation that I needed to work hard and good things would happen.

“As years passed and Milt’s business and influence grew, he stayed the same humble, approachable leader. He always had time for people no matter how busy he might be, and of course no meeting with Milt ever started without a southern kiss on the check — didn’t matter if you were male or female.

“Milt taught me a lot of valuable business lessons, but the most important lesson was his philosophy of giving and helping others,” she said. “Milt used to constantly say, ‘You can’t give good away.’ He believed with his whole heart that whatever good you put out in the world would come back to you threefold.”

Jean Cole said her and Milt’s generosity started from day one, just giving time when they didn’t have the money.

She grew up on a dirt road with no electricity, and they came to Logansport with a cedar chest and a television set and wouldn’t have dreamed she’d be this far in life, but what you give comes back in some form.

Later when they couldn’t afford a civic project, they still pledged, she said.

“Somehow the money would always show up,” she said.

Milt’s generosity to education started after he served on the Indiana University Kokomo Board of Trustees, and he and Jean served on the Ivy Tech Board of Regional Trustees.

The Coles recently made a $60,000 commitment to support annual scholarships at Ivy Tech and to establish a student ambassador program to reach out to Cass County high schools.

“I don’t think you can talk about Ivy Tech without thinking of Milt and Jean Cole,” said Kelly Karickhoff, executive director of Resource Development for the Kokomo and Logansport Ivy Tech campuses.

“Milt Cole was a true philanthropist, a person who always sought to promote the success of others,” Indiana University Kokomo Chancellor Susan Sciame-Giesecke said. “Over the years he has been so generous to Indiana University Kokomo. He has established more than one scholarship allowing students to realize their degrees; he supported the renovation of the Cole conference room by providing beautiful Cole lumber; and he financially supported the Cole Family Fitness Center which provides a beautiful facility for our students to exercise and stay healthy. He never sought recognition; he just wanted to help others succeed.”

The Coles also gave to statewide organizations like the Riley Hospital for Children, and he was involved in local civic organizations.

Milt received honorary degrees from both colleges, and she received one from Ivy Tech.

He also received the Sagamore of the Wabash Award, Indiana’s highest honor, but the list of awards the couple earned is extensive. But, Milt didn’t do it for the recognition, she said.

“He really captures the best of what this country has to offer,” McCurdy said.