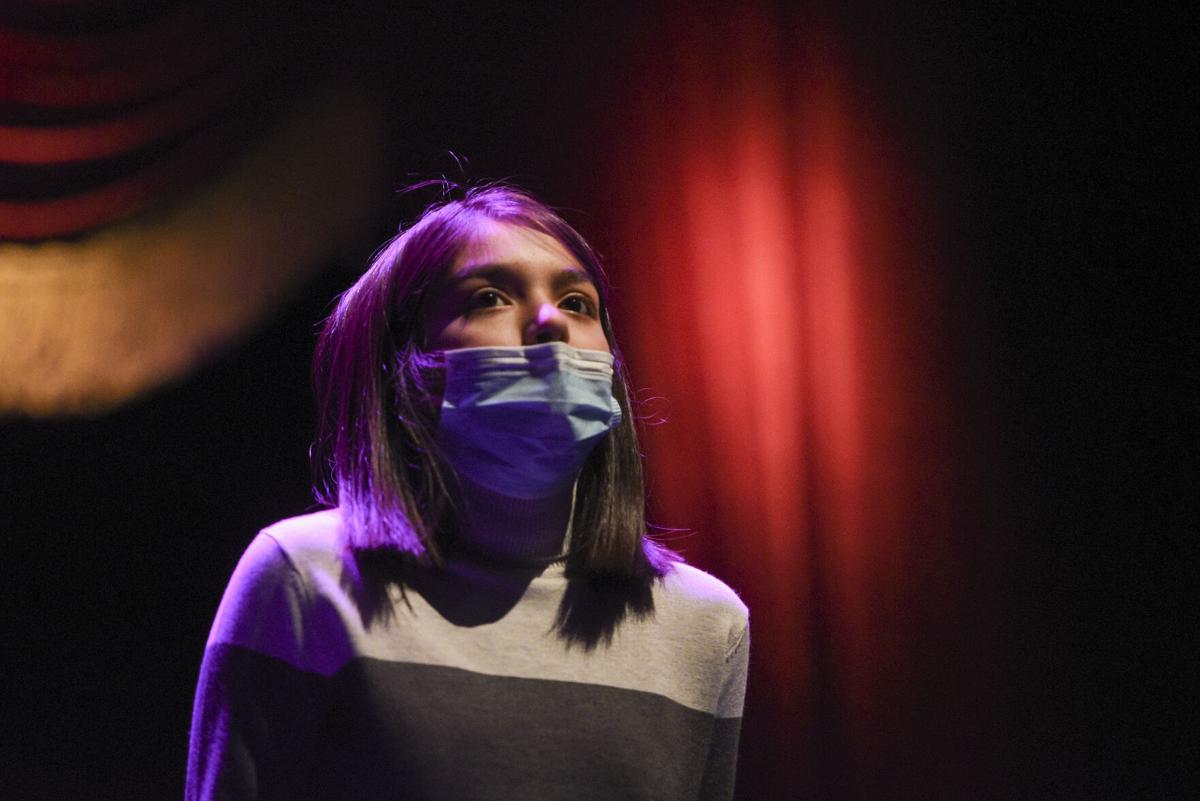 Yuri Servin, an eighth grade student at Logansport community schools, rehearses her monologues at the McHale Performing Arts Center on Tuesday in Logansport. 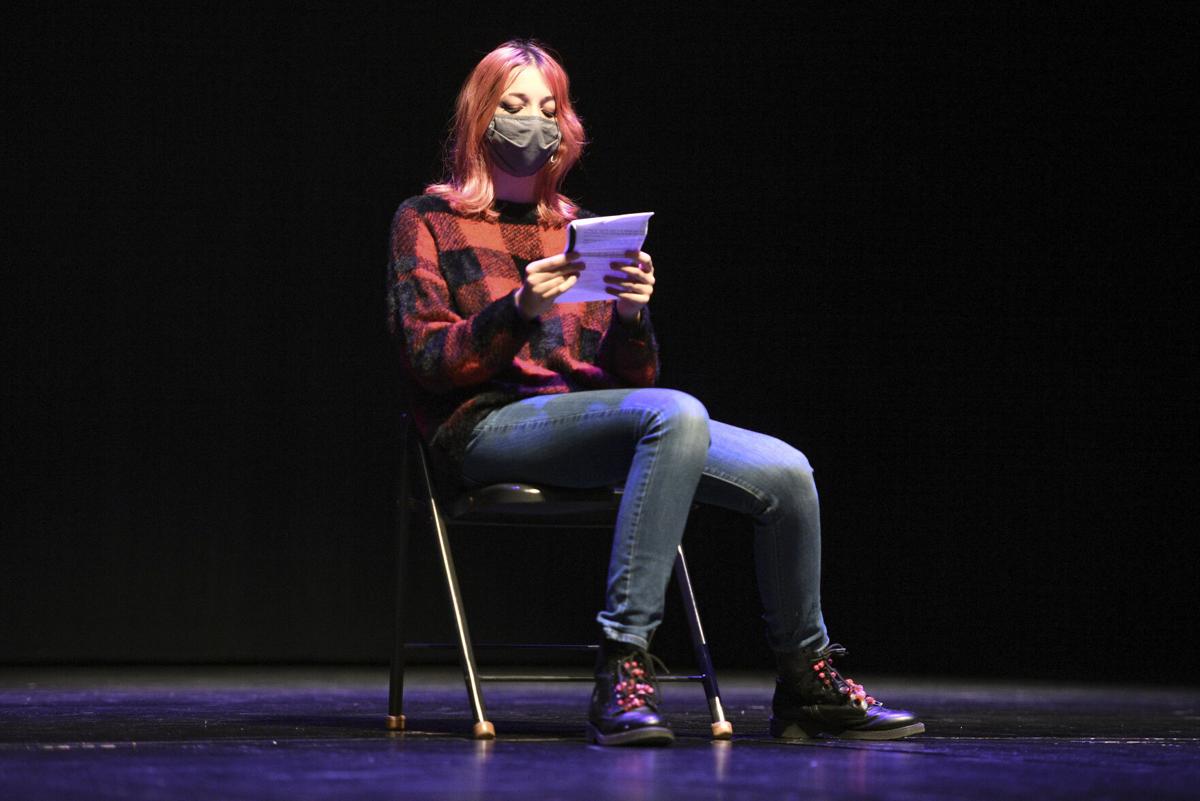 Ella Weathers checks her script as she rehearses her monologues at the McHale Performing Arts Center on Tuesday, Nov. 17, 2020 in Logansport. Jonah Hinebaugh | Pharos-Tribune 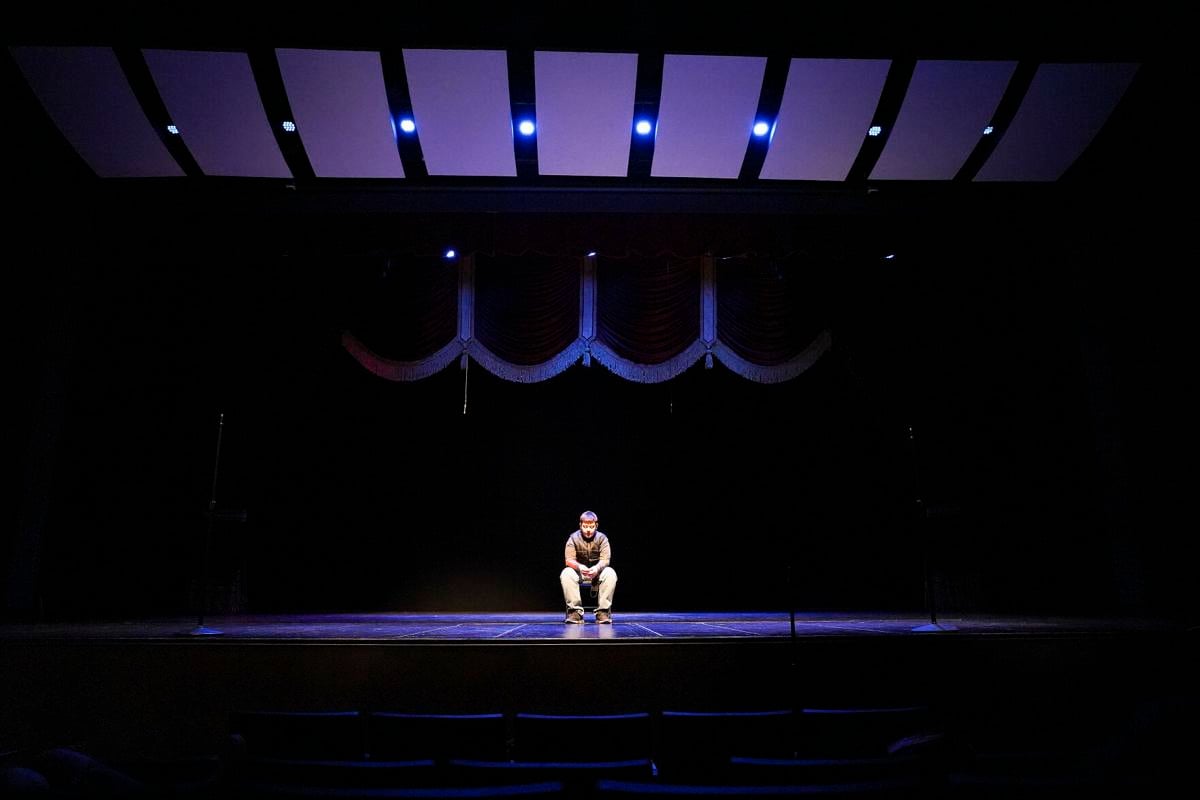 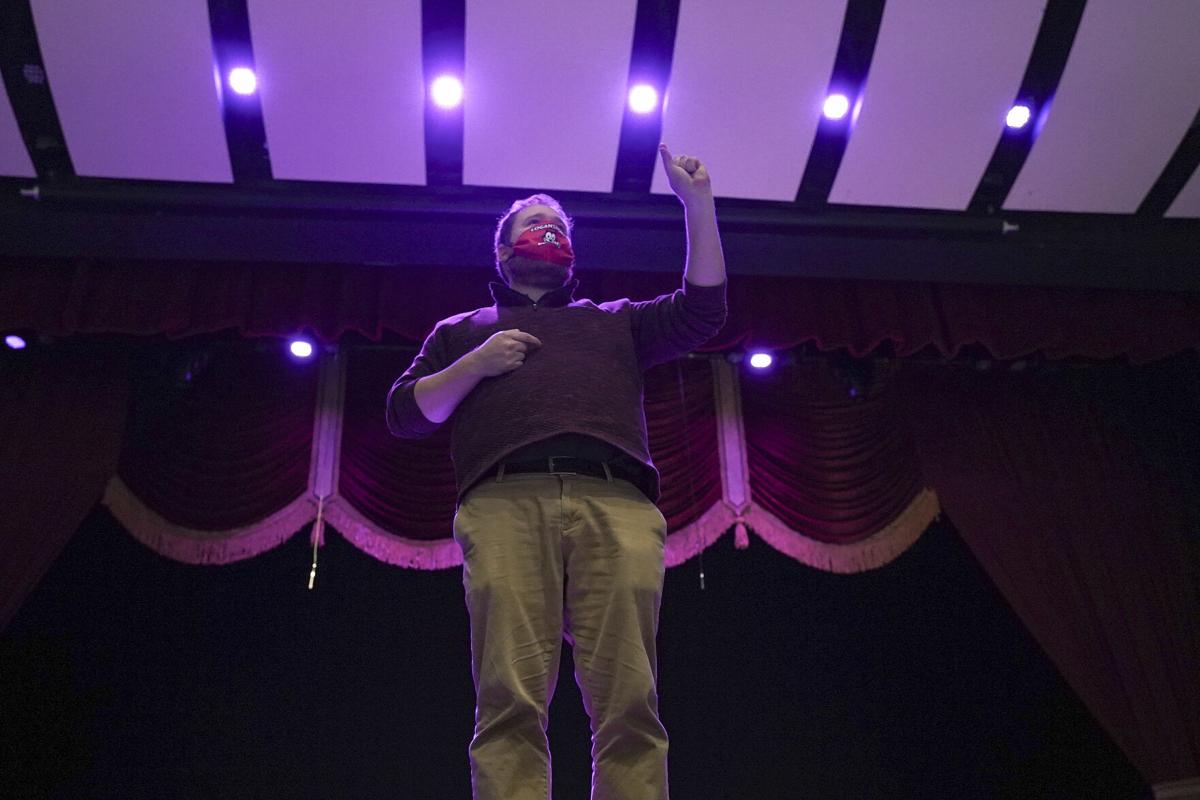 Chris Pearcy addresses his students at the end of their rehearsal at the McHale Performing Arts Center on Tuesday.

Yuri Servin, an eighth grade student at Logansport community schools, rehearses her monologues at the McHale Performing Arts Center on Tuesday in Logansport.

Ella Weathers checks her script as she rehearses her monologues at the McHale Performing Arts Center on Tuesday, Nov. 17, 2020 in Logansport. Jonah Hinebaugh | Pharos-Tribune

Chris Pearcy addresses his students at the end of their rehearsal at the McHale Performing Arts Center on Tuesday.

It’s cliché to say that the show must go on, but for the students of Logansport Community Schools, that’s exactly what’s happening come December.

The pandemic slowed down planned theatrical events, including the annual Junior High Thespian Showcase usually held in late October, and the audiences are limited to 50 people.

But there are alternate plans.

The first plan was to have a multi-performance live show on Nov. 20 and include performances from high school students and from the WINGS drama troupe, which had also been planning a show.

Now the plan is to videotape everything, with students who are quarantined still recording from home as originally planned and the others being recorded at school.

There will be the WINGS play, skits, monologues, musical solos and musical duets — a theater of opportunities and the first dramatic performance of the year.

“We cover it all,” said Pearcy.

And the show will be “released” on YouTube — and possibly other sites — on Dec. 4.

“It’s just a matter of ‘it would be better and safer if we do this,’” Pearcy said about the video version. “We’re going to lose a lot in donations, but ultimately the kids will get to perform. That’s what matters.”

Blair Bailey, director at Columbia Sixth Grade Academy, said it takes time for student actors to get together and to memorize performance pieces, so more time was beneficial.

Some of their performances will also be used for the Indiana Thespians contest.

The students get feedback and awards for performances normally when they perform in the contest live, which helps them, Pearcy said.

Eighth-grader Yuri Servin is doing two monologues for the video event and for the contest. She said it’s easier this year to concentrate on monologues because there’ll be no play, and she also likes the plan for performing for video for the first time.

“It’s easier not having it live because if we mess up on the recording, they could just delete it,” Servin said.

Sixth-grader Cooper Prifogle, who is doing a monologue for the first time this year, said he hopes the video version is as good as a live show.

“I think it’s going pretty well, for the most part,” he said.

He got involved in drama because it looked like fun when his sister did it, and he chose to do the monologue “Mommy Says I’m Pretty on the Inside” because it’s funny and would also seem fun to do.

The Dec. 4 video release will also be the debut of something new to Logansport drama.

Bailey said that her improv troupe, which started this year, will still do improvisation scenes on video, even though video seems to be the opposite of improvising on stage.

“Whatever the audience sees, it will not be rehearsed,” said Bailey. “It will be a one-of-a-kind, exclusive performance.”

Despite the restrictions of this year, the improv group has been popular in the school, and although students were a bit cautious about it at first, many want to join next year, she said.

The group drama project also includes the WINGS troupe, which had planned to perform a play this autumn about the opioid crisis called “We Are the Champions” and are videotaping that for December.

It will be the second production for the special needs students whose name comes from “no more waiting in the wings” because being part of WINGS means being active, according to WINGS founder Lisa Terry.

“They are not truly understanding how the video presentation will ‘work,’” stated Terry. “But because they love to perform and be on stage, they just do it with great enthusiasm each and every time.”

The Cass County Community Foundation helps support WINGS, so the loss of donations from the live show isn’t too big a concern.

Pearcy said the junior high drama department isn’t too concerned about the loss of donations at the door, either.

“We had a really great year last year, so we’ve been able to weather that storm,” he said.