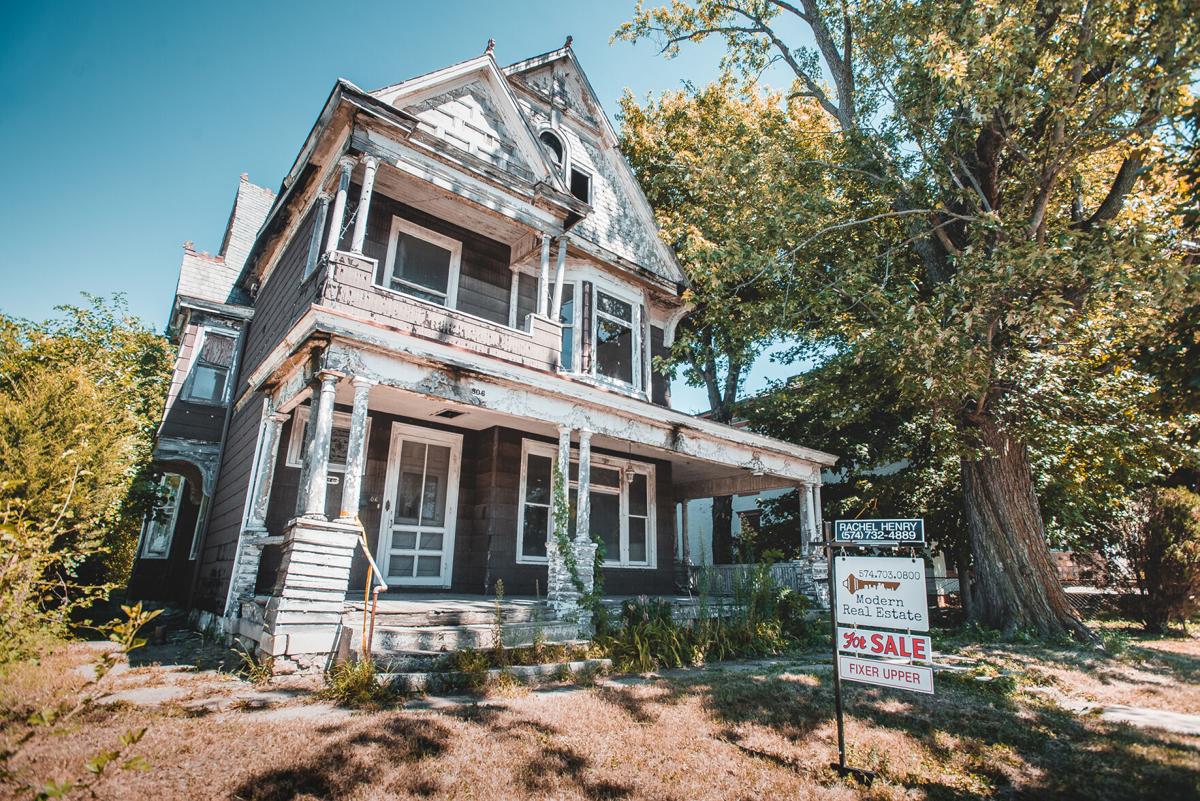 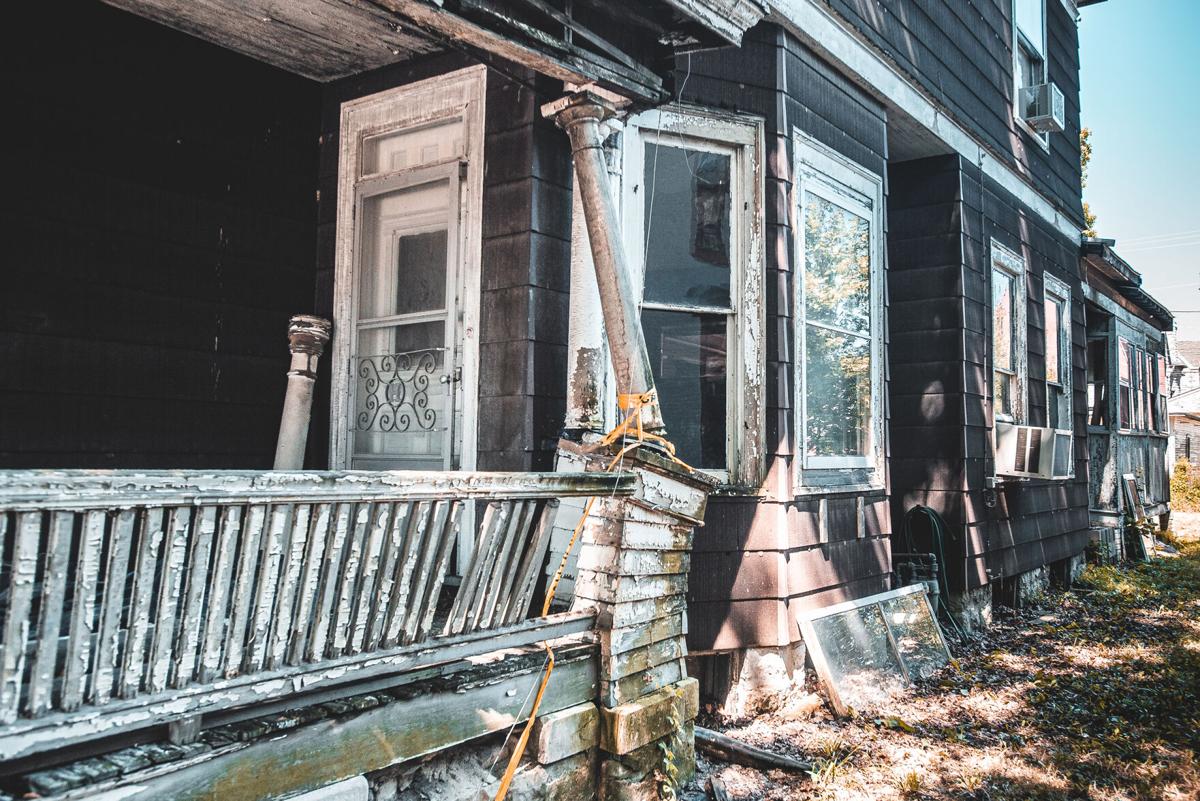 The porch of the Greensfelder house, like much of the outside, needs a lot of work. Logansport renovator Paul Willham and owner Geoffrey Petzel say the inside is still intact with a lot of original features and a lot of work done inside over the years. 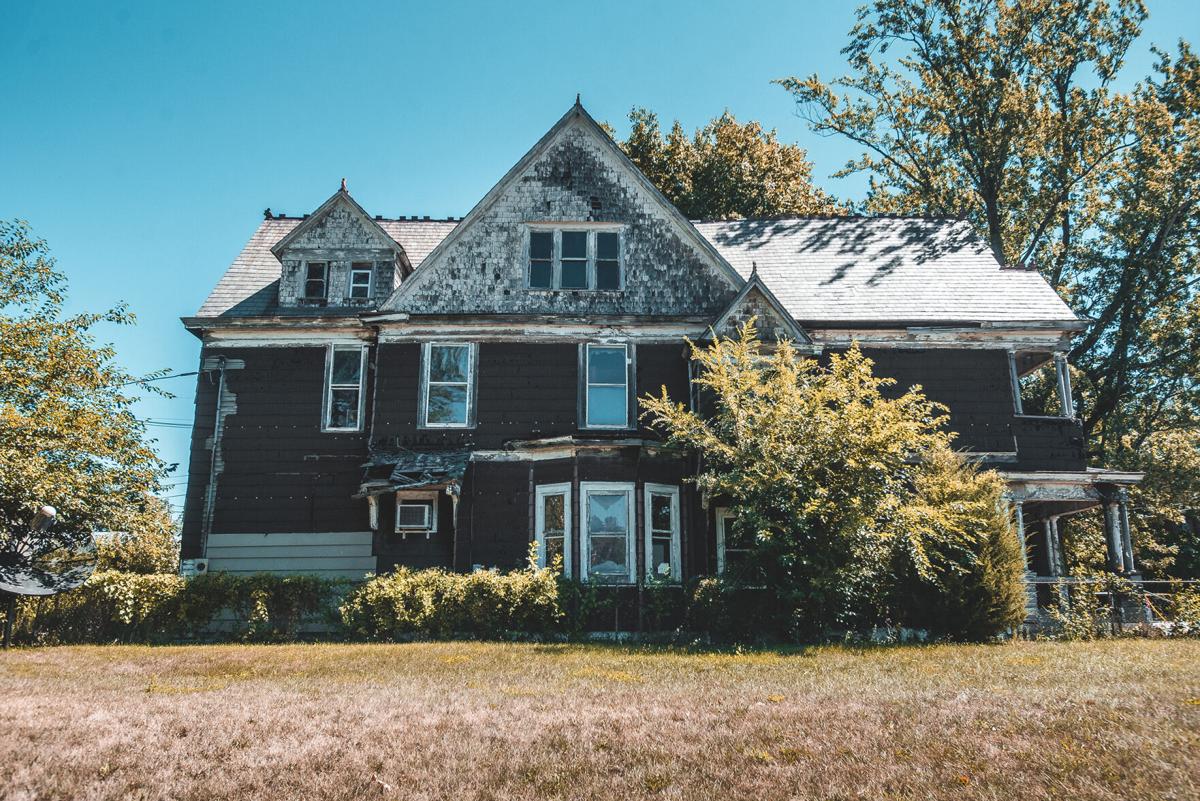 The Greensfelder house needs a lot of work on the outside due to neglect over the years and being abandoned for about two years. However, the inside of the home is still sound and retains many original features. Tony Walters/Pharos-Tribune

The porch of the Greensfelder house, like much of the outside, needs a lot of work. Logansport renovator Paul Willham and owner Geoffrey Petzel say the inside is still intact with a lot of original features and a lot of work done inside over the years.

The Greensfelder house needs a lot of work on the outside due to neglect over the years and being abandoned for about two years. However, the inside of the home is still sound and retains many original features. Tony Walters/Pharos-Tribune

There’s a “For Sale” sign on the lawn at 806 E. Market St. and a condemnation sticker in the house’s picture window.

That isn’t the contradiction it would seem.

There’s hope for restoring the house, which was originally built by Eli Greensfelder in 1902, and sits in what the city is trying to make the Riverside Historic District.

It will just take two things: a lot of money and a lot of experience, said Paul Willham, communications director for Logansport Landmarks and an experienced renovator himself.

At $39,000, it’s the least expensive house for sale in Logansport, he added. However, Willham estimates that it would take between $150,000 and $200,000 to renovate the place, possibly more if the buyer is going for a museum-level renovation.

It’s not for the first-time renovator.

“You’re not going to be able to fix it on the weekends,” he said.

The current owner is Geoffrey Petzel, an out-of-town restorer who has about 11 properties in three states, Willham said. He bought it at a tax sale in December, the second time it had been for sale in a tax sale, and received the title about three weeks ago.

Petzel and his wife own a company that renovates houses, but they don’t have the large, experienced crews close enough to do the work the house requires.

“This one we bought specifically to make sure it didn’t end up in the wrong hands,” he said.

Petzel is putting a restriction on the deed so that it can’t be turned into multi-family housing. That restriction will allow for restoration as either a single-family residence or a limited commercial use, possibly both.

The possibility of someone converting it into apartments has been a concern for a while.

When Logansport Landmarks included the house on its most endangered list in 2016, the danger was someone not just turning it to a bunch of rental units but stripping its historical materials for salvage.

Petzel said there are original light fixtures and a beautiful staircase, and the house’s intricate tile work is intact, as are much of the inside features.

Cass County Historical Society Executive Director Thelma Conrad said that the house’s construction and décor are the significant part of it.

“It doesn’t hold much historical [significance] other than the woodwork and materials inside — just like any other house of its time within the city limits,” Conrad said.

But it holds stories.

The original owner, Eli Greensfelder, started the Greensfelder Men’s Store at 313 E. Market St. in 1873 and died in the store after having a stroke in 1918.

The store remained a Logansport highlight into the late 20th century.

His twin sons, Melvin and Herbert, took over the business after returning from service in World War I, and after Melvin died in 1975 and Herbert in 1977, the store continued until 1982 and became Colonial Decorating Center in 1983.

Eventually, the city demolished the Greensfelder store on Jan. 30, 2013, after an outside wall and inside partition collapsed.

The family also had an impact on Logansport social life, Petzel said.

In 1933, the Ku Klux Klan had moved an office into the city.

The twins, who were Jewish, and a Roman Catholic friend, Indianapolis attorney Frank McHale, hired some gangsters out of Chicago to destroy the office, according to a letter in the Aug. 5, 1995, New York Times by Melvin’s granddaughter, Rutgers University history professor Jan Lewis.

Accounts differ on how the goons destroyed the office — and possibly wrecked some Klan members.

Some stories include claims of arson.

Lewis stated that in her grandfather’s papers after his death, they found a 1933 roster of KKK members.

The house at 806 Market St. is the last physical remnant of the Greensfelder family in the city, and it hasn’t been totally neglected.

The most recent resident owners, the Justice family, had gotten the pocket doors [doors that slide into the walls instead of swinging open] and fireplaces working, and they made improvements.

They’d also tried to get it registered as historic on the local, state and national levels, according to a blog at greensfeldermansion.blogspot.com.

However, they were forced out because of lead paint and their children.

Prior to them trying to restore it, a truck driver owned and renovated the house, but he sold it because of his age and schedule.

A couple who owned it before him also did work on it.

“That house has essentially been under some restoration for years,” said Willham. “It looks worse because of the exterior.”

The previous resident owners, the Justice family, didn’t know anyone who could do the outside at an affordable rate, he said.

“The house in general engenders a great deal of love for it,” Willham said.

But it needs constant upkeep.

Willham said that Petzel’s commitment to finding someone who will restore it properly also avoids another problem.

People or groups will buy a property at a tax sale and sit on it for five or six years, gambling that it will go up in price, as Logansport houses have been over the last few years due to scarcity in housing.

So far, the Greensfelder house has gotten some attention from people both in the city and out of state.

Some who’ve inquired through Logansport Landmarks are also interested in making it a bed and breakfast or Airbnb-type of residence.

That will mean another level of permits and things like overhead fire sprinklers, Willham said.

Of the roughly dozen inquiries, he estimates that two to three seem to have the necessary plans, finances and experience.

But the house is likely to sell as housing in Logansport gets scarce and people’s fortunes turn around.

“There’s need and value now that wasn’t there five years ago,” he said.

It’s also still cheaper to buy than a similar place in most major cities.

“In Indianapolis, that would be a quarter of a million dollars as it sits,” Willham said. “People would be fighting over it. I’ve paid more for things in worse shape.”

Petzel said the house, when restored, would easily sell for three-quarters of a million up to $1 million in a place like Lafayette or the Chicago suburbs.

The idea of the Riverside Historic District is not new, but at the same time, it’s in its early phases.

At the Aug. 13 Logansport Historic Preservation Commission meeting, the commission members approved an application to put Riverside on the National Register of Historic Places.

But the original idea for that came out of a 1984 Cass County sites and structures survey to identify areas that would make good historic districts, said Deb Parcell, Community Preservation specialist with Indiana Landmarks.

Two of the three recommended districts have been created already.

Banker’s Row, a group of 20 houses along Eel River Avenue, became listed in the National Register of Historic Places in 1999.

The Courthouse Historic District also became listed in the National Register in 1999. It’s in the downtown area and encompasses 79 buildings, including the 1896 Masonic Hall, the 1907 Elks Lodge, the 1942 Logansport-Cass County Public Library and the 1930 State Theater.

Riverside is the biggest of the areas identified, said Parcell

The 340-acre area is 19 blocks long and three blocks wide, containing 1,303 structures — 1,031 that are “contributing resources” — and Riverside Park, according to the application.

“It was important to former Mayor [Dave] Kitchell that it receive designation,” said Parcell.

She was finalizing the application to go to the state this week, and approval there will move it on for national consideration.

It could be a year or more before the designation is granted or denied, she said.

Parcell said that it would depend on use, and commercial or nonprofit uses could mean more opportunities.