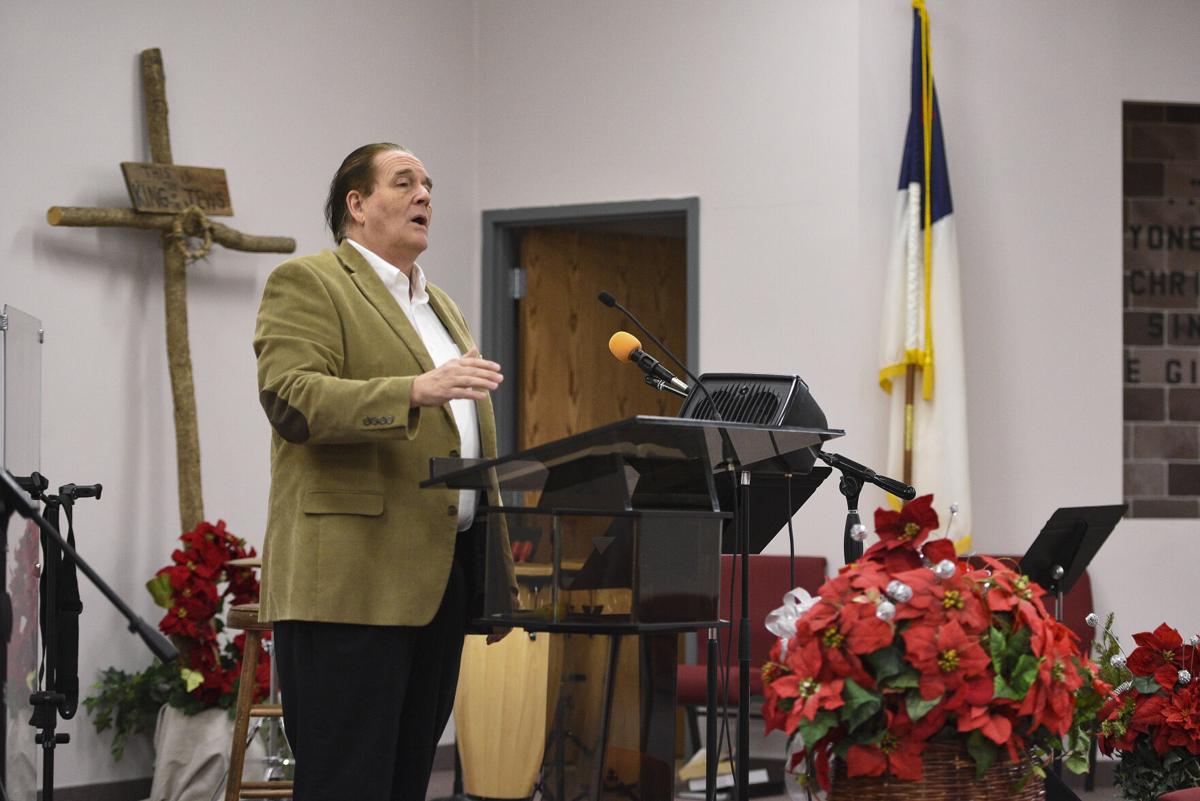 Preacher Jeff Strite sings “Silent Night” at the Church of Christ on Tuesday, Dec. 22, 2020 in Logansport. 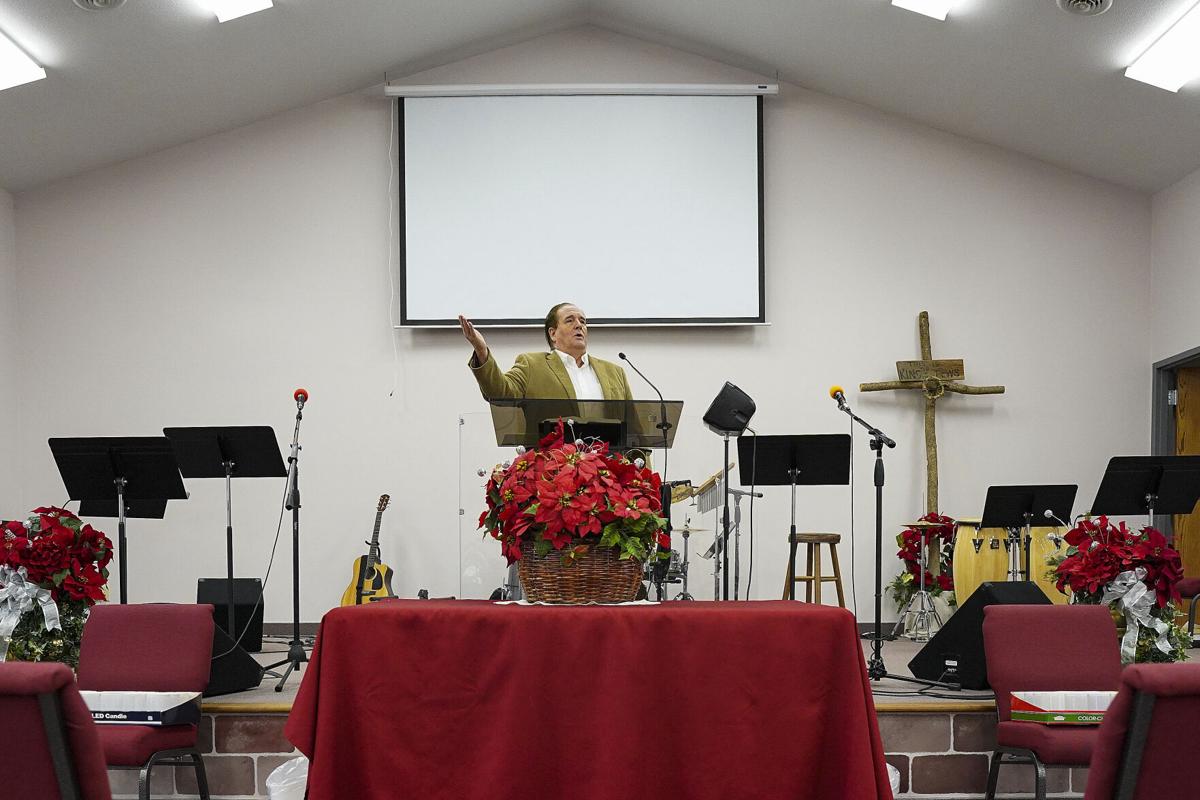 Preacher Jeff Strite stands at the Church of Christ’s pulpit on Tuesday, Dec. 22, 2020 in Logansport. 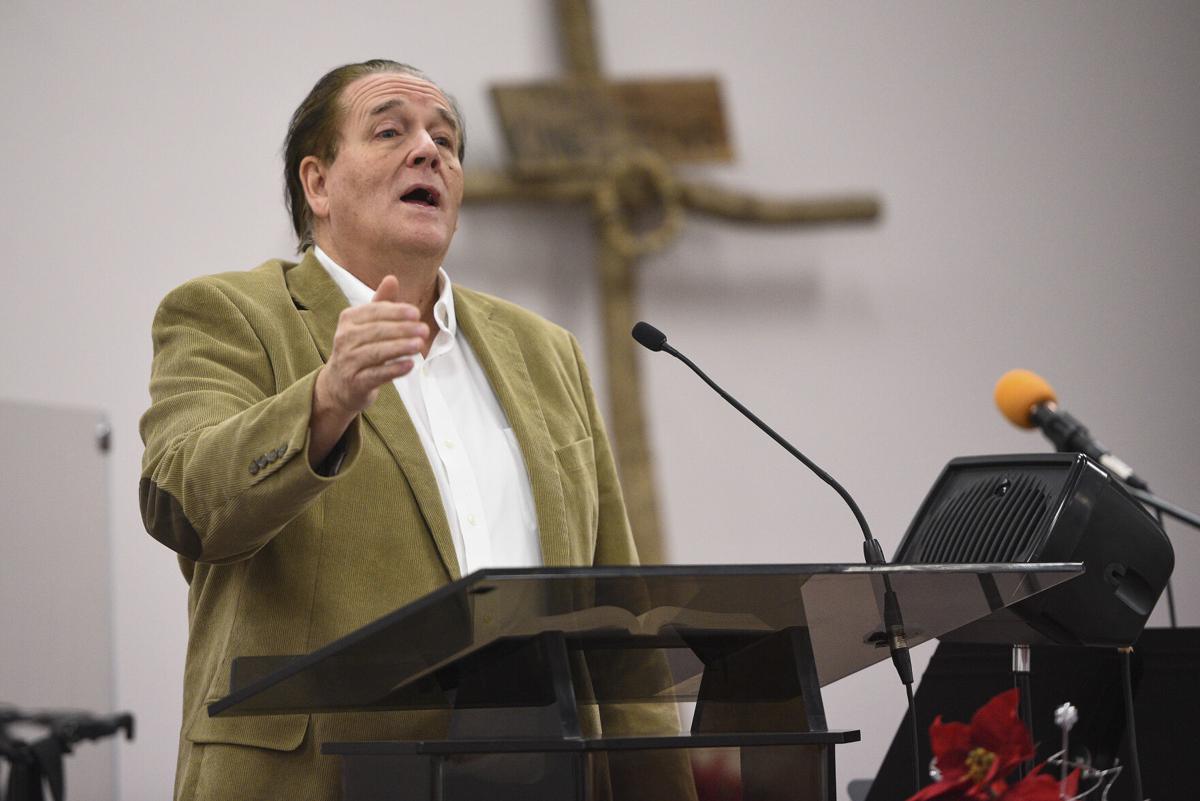 Jeff Strite, preacher at Church of Christ, stands at his lectern on Tuesday, Dec. 22, 2020 in Logansport.

Preacher Jeff Strite sings “Silent Night” at the Church of Christ on Tuesday, Dec. 22, 2020 in Logansport.

Preacher Jeff Strite stands at the Church of Christ’s pulpit on Tuesday, Dec. 22, 2020 in Logansport.

Jeff Strite, preacher at Church of Christ, stands at his lectern on Tuesday, Dec. 22, 2020 in Logansport.

This is a season of love, a season of spending time with family, and a season for creating memories.

It’s a beautifully wrapped package that might be slightly different this year, but Nate Eckert, pastor of Webb Chapel United Methodist Church, believes people can still find hope and happiness in the Christmas season.

Even though the holidays tend to be stressful, said Four County Counseling Center’s Dawn Griffith, director of nursing, especially for individuals suffering a mental health illness, the season could be easier if extra efforts were made to reach out to each other.

“People need to connect with others,” said Melissa Robertson, director of adult intensive and residential services with Four County.

When COVID hit in March, there was a slight increase in the number of people dealing with mental health issues. The forced isolation did not help anyone’s situation – isolation often leads to depression, and people who experience depression often want to remain alone, so it’s a cyclical effect that could put undue strain on a person, according to Griffith. However, with technology readily available, she said it has made staying in contact with loved ones easier. Through such communication options as Facebook, Skype, and Zoom, people have been able to keep up on the ins-and-outs of each other’s lives.

Or maybe, families will focus on the traditions that may have long been shoved to the back-burner. People are limited on their funds or they’ve lost family members, said Mary Babb, licensed mental health counselor and owner of Bringing Hope Counseling, 810 Michigan Ave. “I keep hearing from my clients how much more important it is that we’re spending time with people.”

Christmas isn’t about a bunch of gifts or how much money is spent, Babb said. “It’s about quality time that is being spent with people. For some, that means going back to their faith, to that part of their lives that they let fall to the side. Now, they’re putting meaning into Christmas that maybe hasn’t been there in a while.”

But no matter how a person chooses to spend today, whether alone, on the phone, or with a small group, Babb said this season has been different. “Money is tight. People are laid off or quarantined – when quarantined, they may not be getting paid.”

So, it’s back to the basics this season – it’s not being caught up in the commercial trap, she said. “It’s baking cookies or going outside to do something together when you can.”

“If Christmas shows us anything, especially the original Christmas story on the first Christmas Day, the hope we’re looking for is not what we’re constantly surrounded by,” said Eckert. “Hope comes in unexpected ways and places.”

“We shouldn’t focus on the uncertainty, confusion, stress, and chaos that have been brought into our lives. To gain hope and be in hope is to be focused on things we have not yet seen,” he said, quoting Hebrews.

And hope is what Christmas brings to the world.

It’s not a time to be fearful or a time to be worried. It’s a time to “impart hope to people by calling them and being there for them, to help them know they need not be afraid,” said Jeff Strite, preacher of the Church of Christ at Logansport, 2347 Burlington Ave. “If you’re a Christian, you have nothing to fear – it doesn’t mean you shouldn’t be cautious – but you must not allow fear to dominate your life. The minute you do, you shut yourself into a closet and stay there.”

That’s why Robertson said it’s important to reach out even during difficult times.

It’s also why Strite believes people need to find their hope in Jesus. “Many people view hope as a means of karma. People do bad things in life, so they balance with good works and hope they get into Heaven. That’s a false concept. We can never be good enough to earn God’s love. He loves you in spite of your sin. The only way to get to Heaven is by the blood of Jesus, not good works. That’s why God sent His son – Jesus became fully man so He could die for us, and He is fully God so He could save us.”

Retelling a story he previously shared with members of his congregation, Strite said there are cut flowers and potted plants – a person could follow the same steps: faithful watering, plenty of sunlight, and some tender loving care – but after a month, which arrangement looks better? Obviously, it would be the potted plant.

“That’s because it’s the root, not the fruit, that gives us life,” he said, adding that when a plague struck during the Roman Empire, the Christians were the ones who stayed behind when everyone sought to flee the city. “They were the ones who took care of those with the illness. The thing we have to understand is that [COVID] is a virus, and we are not going to escape it.”

People can find ways to cope with the times we’re living in and they can find ways to overcome the stressors, according to Strite. But until people recognize the significance of the birth of Christ, and the love God has for everyone, then living without fear is nearly impossible.

“You know that if you’re a Christian, you have nothing to fear,” he said.

Eckert agreed, saying that as people celebrate Jesus’ birth today, they should remain focused on the light that is ahead. “The light is Christ, and it’s His goodness, hopefulness, and redemption that we’re traveling toward.”