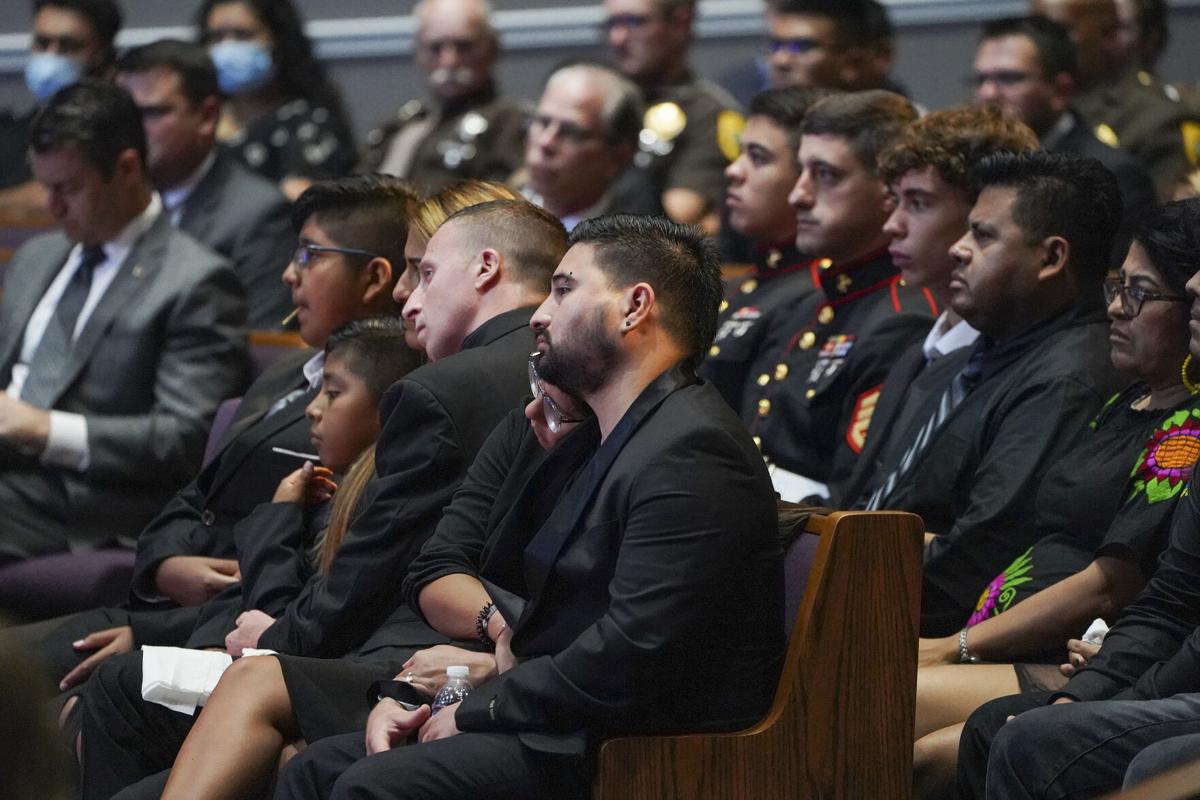 The family of Marine Cpl. Humberto Sanchez waits for the funeral service to begin at LifeGate Church in Logansport on Tuesday. 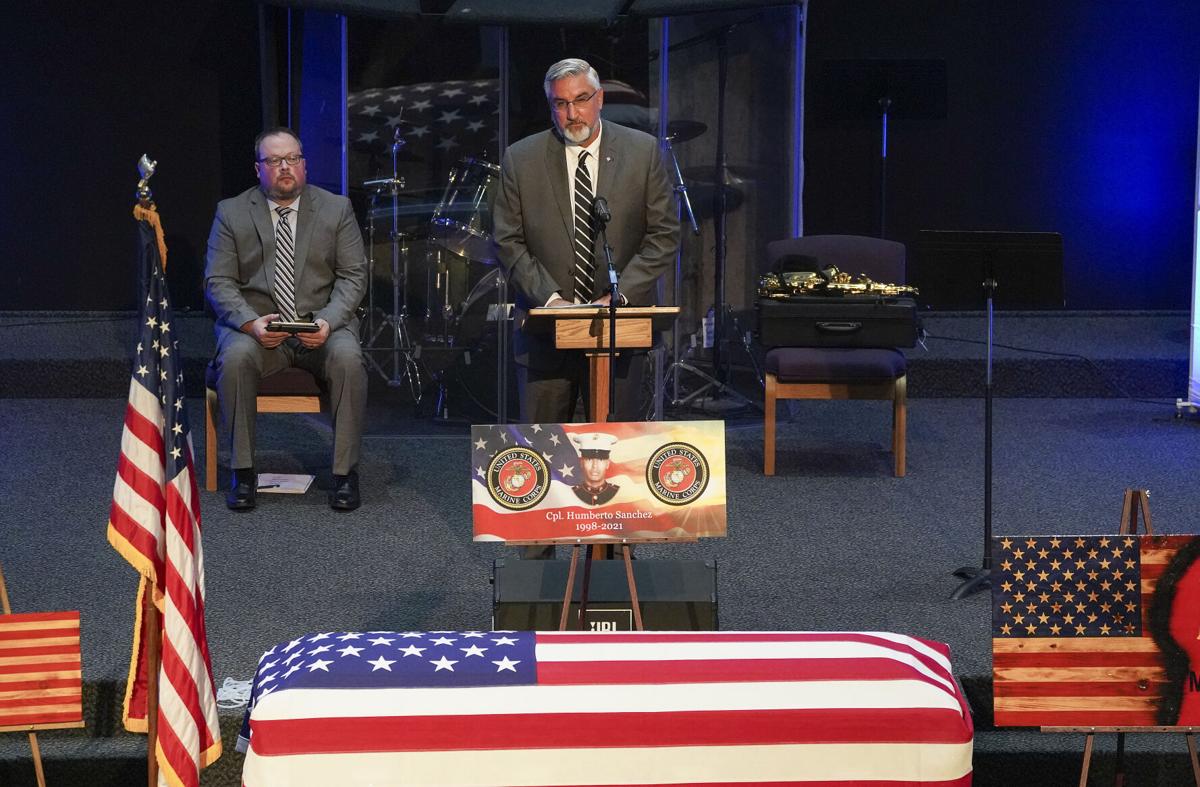 Gov. Eric Holcomb speaks to those attending the funeral service for Marine Cpl. Humberto Sanchez at LifeGate Church in Logansport on Tuesday. 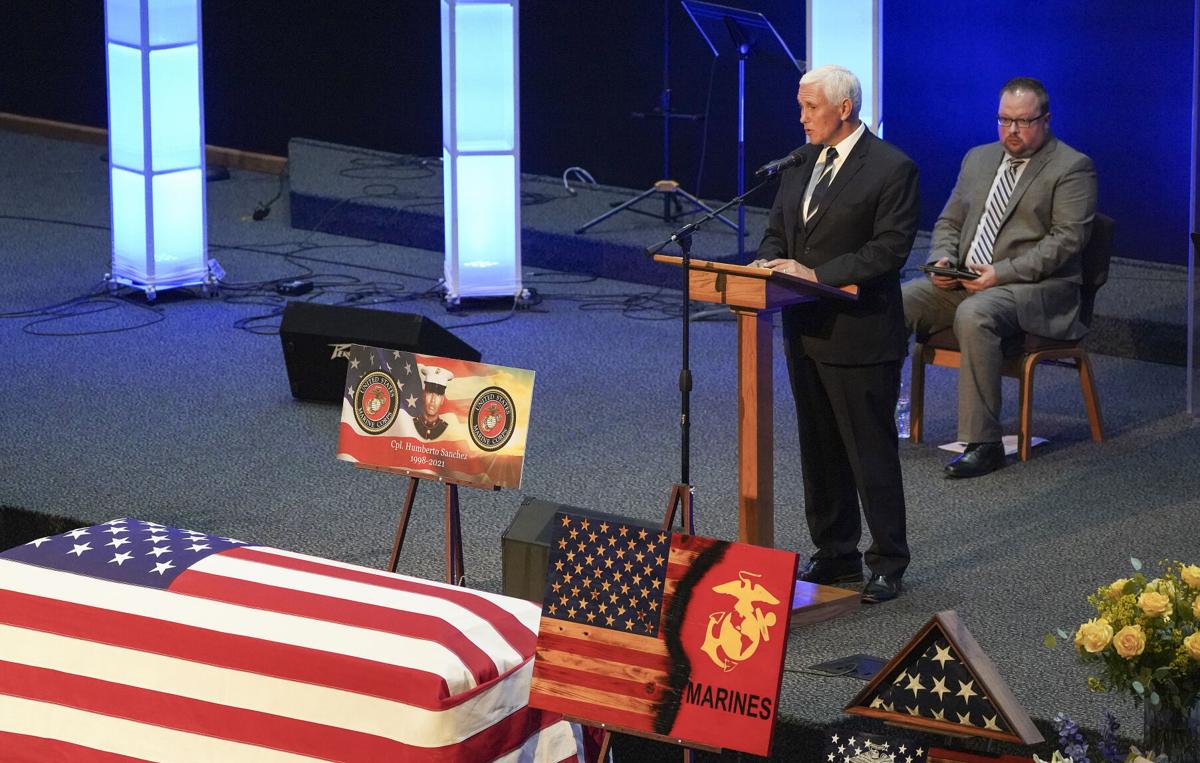 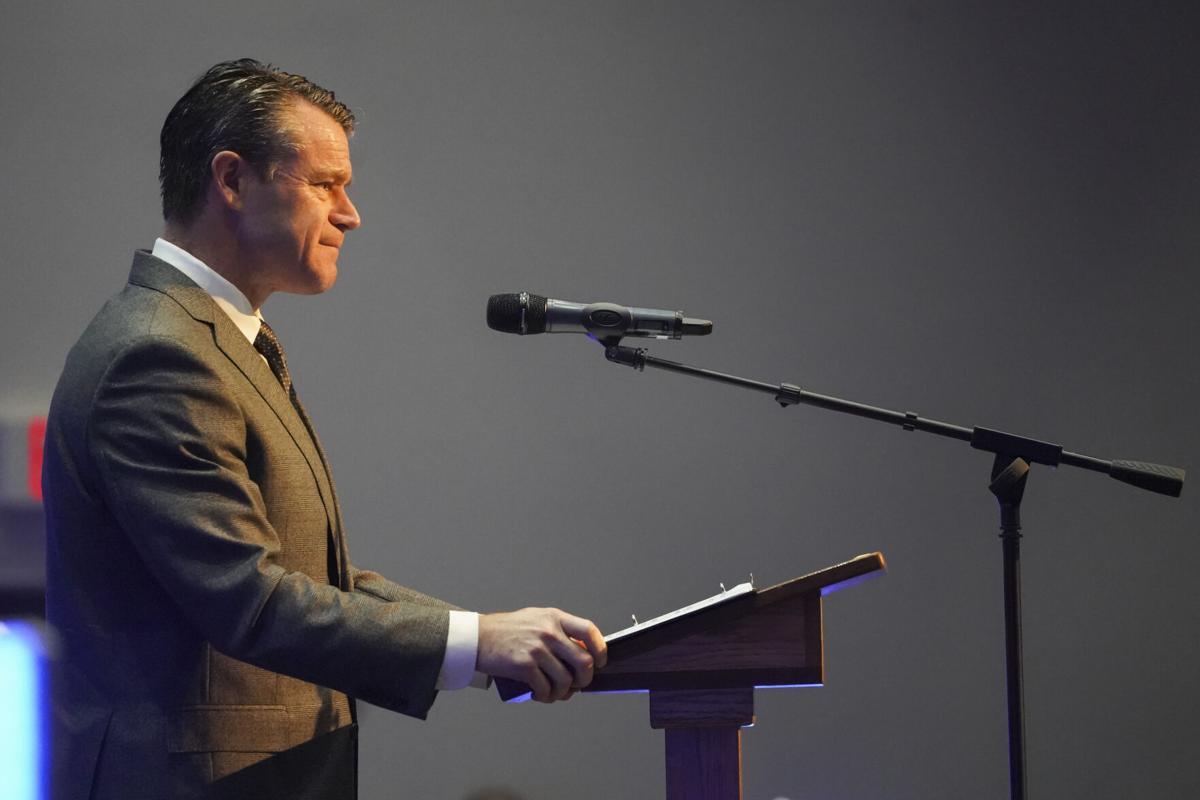 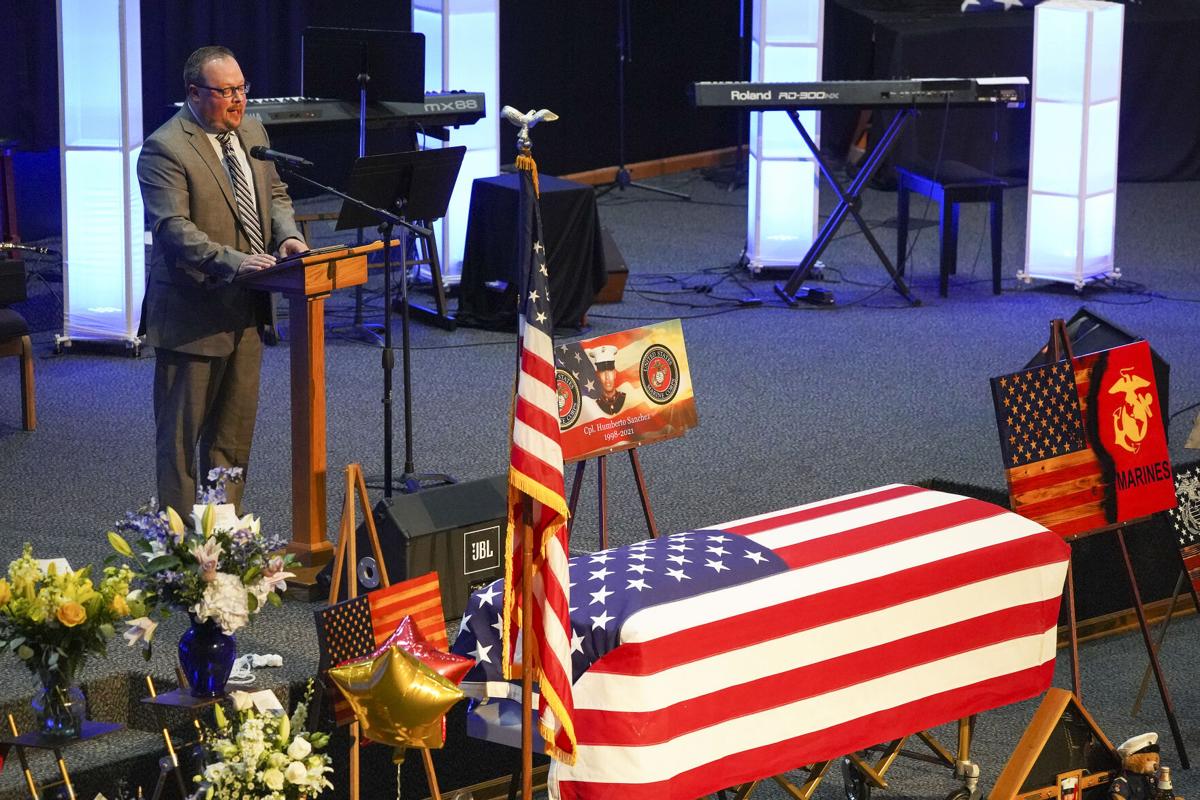 Pastor Zach Szmara talks about his time spent with Marine Cpl. Humberto Sanchez during the funeral service for him at LifeGate Church in Logansport on Tuesday.

The family of Marine Cpl. Humberto Sanchez waits for the funeral service to begin at LifeGate Church in Logansport on Tuesday.

Gov. Eric Holcomb speaks to those attending the funeral service for Marine Cpl. Humberto Sanchez at LifeGate Church in Logansport on Tuesday.

Pastor Zach Szmara talks about his time spent with Marine Cpl. Humberto Sanchez during the funeral service for him at LifeGate Church in Logansport on Tuesday.

He chose service before self.

He chose to stand at that airport gate, thousands of miles away from his Logansport home.

He chose to protect the youngest, who at such a tender age, wanted what Marine Corps Cpl. Humberto A. “Bert” Sanchez fought to provide.

And in the end, the 22-year-old gave his life so others could live.

“He gave his life defending the innocent civilians fleeing from the chaos that had become Afghanistan,” said former Vice President Mike Pence at the funeral service for the Marine at LifeGate Church in Logansport on Tuesday.

Sanchez was killed in the line of duty on Aug. 26 when a suicide bomber with 25 pounds of explosives entered the Hamid Karzai International Airport in Kabul, Afghanistan, where he had been stationed. The bomber took the lives of 13 military service members and around 180 Afghans. Sanchez was one of the fallen.

Prior to being stationed at the airport, Sanchez was working as an embassy guard in Jordan. He was assigned to the 2nd Battalion, 1st Marine Regiment, 1st Marine Division, I Marine Expeditionary Force, Camp Pendleton, California.

On the last day of his life, Sanchez wasn’t concerned with his well-being, said Capt. Blake Campbell, 434th Air Refueling Wing chaplain with Grissom Air Reserve Base. Sanchez never once considered leaving his post. All he thought about was ensuring those children, mothers and fathers who were seeking freedom would have just that — a future.

A future filled with hope, with dreams and with promise.

“He served to help protect thousands of Americans and Afghans to evacuate Afghanistan,” the captain continued.

“He had his whole life ahead of him, (but) he lost his life protecting theirs,” Young said.

Why he had to die that day, “I don’t know,” said Pastor Zach Szmara of The Bridge. “God had more for Abiel,” as he affectionately called the man others knew as “Humberto” or “Bert.”

A few privileged people had the honor of addressing Sanchez by his middle name. Szmara was one of those privileged.

Szmara said God did not choose to take away the Marine who was so beloved by his family, friends and fellow military service members. But sometimes, he said, “evil destroys things.” And on Aug. 26, “evil showed up.”

Evil took a young man who had a full life ahead of him, Szmara said. But his family and friends may take comfort in knowing that Sanchez now rests in the arms of his Lord and Savior, Jesus Christ.

“Abiel wasn’t perfect. He had his flaws and he made mistakes, but he believed,” the pastor said, explaining that Sanchez was baptized as a high-schooler.

“His decision to personally follow Jesus, who is our greatest gap-filler and bridge-builder” gave Sanchez a path, Szmara continued.

Even as a child, Sanchez was known as the person who could build bridges and bring people together. Whether it was on a soccer field or on the front lines, he stood up for others, offering protection, said Pence, recalling stories Sanchez’s family told him.

His sister said he was a protector who always looked after students who were being picked on, Pence continued.

“I wish I had met him,” said the former vice president. “He embodied the Marine Corps motto (semper fidelis), and he never gave up until the job was done. He stood post aiding those fleeing for safety. He didn’t run. He was determined to get kids out of the gate.”

Sanchez was — at any given time — “a work of heart,” Pence said. “There is no greater love than to lay down one’s life for his fellow man.”

And in the Marine’s 22 years, said Gov. Eric Holcomb, “Cpl. Sanchez accomplished more than most men will ever do.”

From the soccer fields of Logansport High School to the war-torn fields of Afghanistan, Sanchez answered the call to defend others, Holcomb said. And in those moments, Sanchez changed lives.

“In everything he did, Cpl. Sanchez gave it all he had. Few are ever called to make that sacrifice, but we all will always remember his impact,” Holcomb continued.

In doing so, Pence said, “he will inspire generations to come. We will tell his story of courage and of selflessness. Let me assure you, he will not be forgotten.”

“Words fail when heroes fall,” said Pence, but it’s those precious moments that will live on in the hearts of all who knew the corporal. “Faith gives us hope, and heroes give us hope.”

With those words, Sanchez’s younger brother, Ariel, honored the man he so long looked up to with a saxophone rendition of The Marines’ Hymn. Those in attendance rose to their feet and applauded, easily spotting the bright light in his soul that also was carried by his heroic brother.

Every room Abiel walked into was lit by his presence, said Szmara. And those steps were often set in two worlds: he was the first of his family to be born in America, and he always carried a love of his family’s native Mexico with him.

Sanchez bridged both worlds, making them one, Szmara said, and he always shined a light on a brighter future.

“We are a community of immigrants and refugees. As we grow and expand, there is a richer beauty in it all. We are better together.”

From an immigrant family, this man chose to serve America, Szmara said.

He is the “red, white and blue man,” said country singer Coffey Anderson, who sang, “Mr. Red, White and Blue,” while strumming his guitar before filling the church with “Amazing Grace.”

Embodying that hymn, Szmara said that Abiel was full of “amazing grace. He was proud to be a part of you,” he told the family. “And you will always be proud to have him.”

This story was updated to correct the attribution of the quotes from the graveside service. They were made by Blake Campbell, U.S. Air Force c…