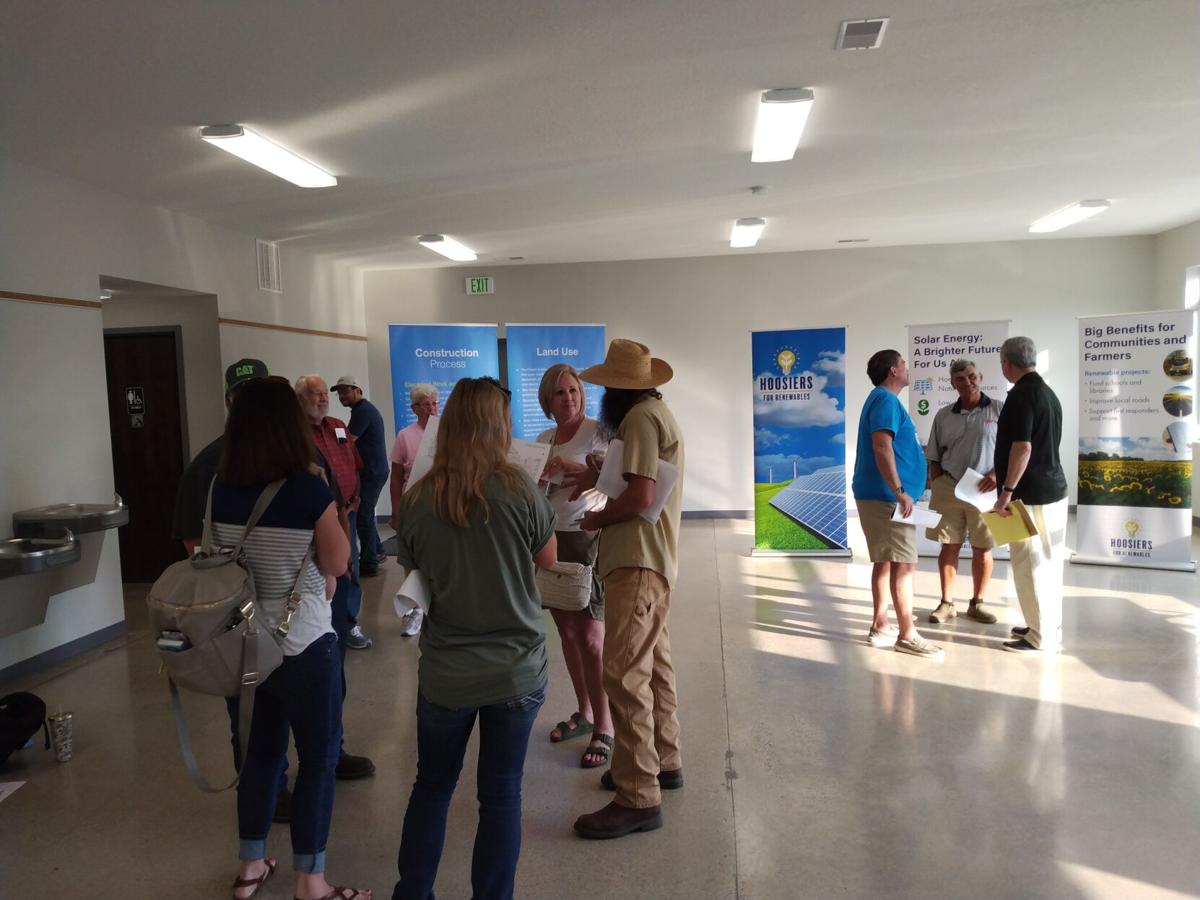 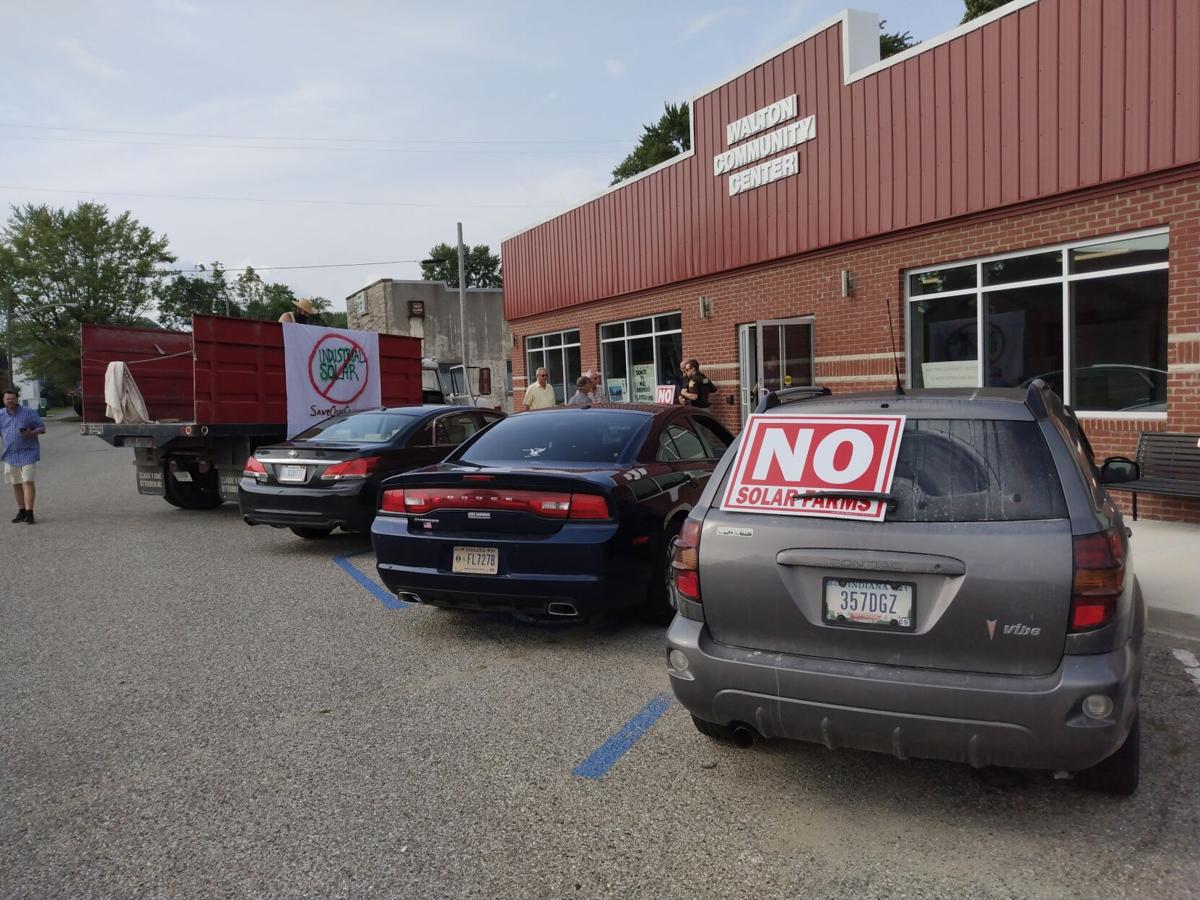 Some vehicles displayed signs against a proposed solar energy field outside the Walton Community Center on Wednesday. 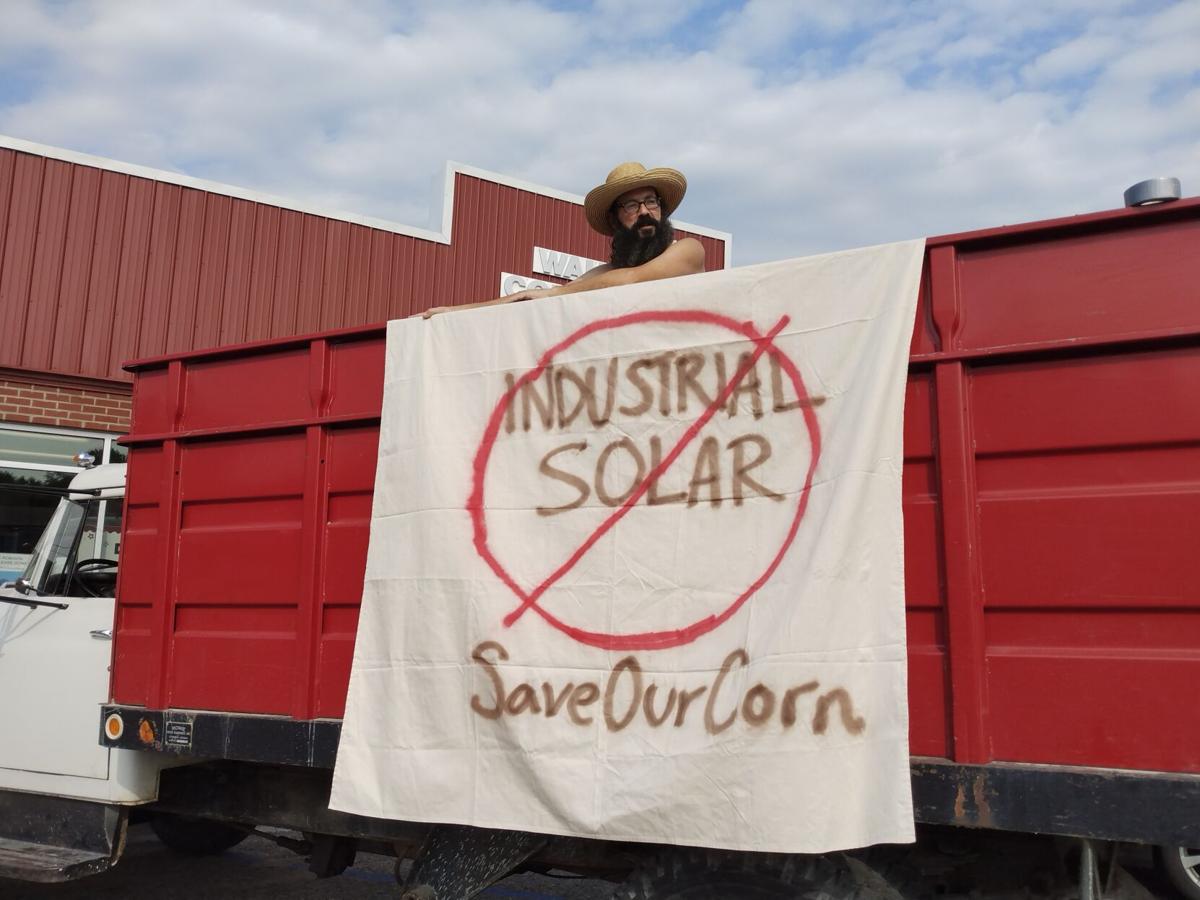 Some vehicles displayed signs against a proposed solar energy field outside the Walton Community Center on Wednesday.

Reaction among residents was mixed on Wednesday night when NextEra Energy held a public open house on a possible solar field in southern Cass County.

More than 35 people showed at the Walton Community Center to look at the presentation — some for the project, some against, some just getting information and some proponents of alternative energy.

NextEra had experts present, including in construction and in environment, to speak with people.

The project is called Appleseed Solar and will take up 1,400 to 1,600 acres of land in the Walton area.

There are two possible layouts for the solar field, which the Florida company’s engineers will ultimately decide on, said Johnson. The solar panels themselves will take up about 400 of those acres, and about 1,000 total acres would be equipment.

The rest of the land would be used for setbacks and buffer, Johnson said. The solar field would have the capacity to generate about 200 megawatts of power.

On Tuesday, a representative of Logansport Municipal Utilities said at the Utility Service Board meeting that the electricity generated by the field would go to Duke Energy, which needs to decommission two coal plants.

The NextEra representatives would not comment on that without deals finished.

“A customer has not been confirmed yet,” said NextEra senior communications specialist Conlan Kennedy. “But regardless of where the power goes, the benefits remain here.”

Johnson said the project would bring in about $30 million in taxes over 30 years, or $1 million each year.

“Solar technician jobs are one of the fastest growing [fields] in the Unites States,” Conlan said.

The company chose Cass because it has access to transmission lines to put power on the electrical grid, has lots of sun and has landowners interested in renting them land, Conlan said.

The presentation banners NextEra put around the community center stated that the project is slated to last 30 years, after which it could see continued use, being “repowered” or decommissioned so agriculture can continue again.

Also written on the banners was that solar creates no waste products in generating electricity and “does not create any hazardous material clean-up concerns at the end of the project’s productive life.”

Drew Miller is against the project and came to find out if others were in the same situation as he is — the property that NextEra is negotiating leases on surrounds his house.

There are no studies on the effect on neighboring property’s values, he said. He added that the rent property owners may be getting is between $800 and $1,200.

Tom Mills also objects to the project. There are hundreds of families around the area who like rural life, he said.

He disputed that having land lie fallow under the solar panels, which the NextEra banners stated, was better for it because farmers in the area take care of the land.

He added that it seems people think the area is empty and without many people, making it good for projects.

“There are homes and families everywhere,” he said. “It’s not desolate.”

He doesn’t mind people having solar panels on their roofs, though.

Traian Jay said he was for the project and already signed the lease.

“Solar energy is something we need to do,” Jay said. “We need to reduce our carbon footprint.”

Because of a non-disclosure agreement, he could not talk about payment amounts in the lease. But he said he understands why some people don’t want a large-scale solar field there.

Christy Householder, Cass County director of economic development, said the county hasn’t begun dealing with the project yet, and she was there as a citizen, learning.

Stajduhar agreed there were people for and against the project at the open house and those there for information.

And the county can benefit from the project.

“The revenue is going to be tremendous,” Stajduhar said. “It’s going to make a difference in the county budget.”

The field would surround him on three sides, and he compared it to the largest solar field in the state at the Indianapolis Airport.

“It’s an ugly addition for the neighbors,” Martin said. “It’s a great deal for the landowners.”

He believes the landowners have property rights as long as they don’t affect others’ properties, and he’s open to how it’s put in.

“If it was hidden behind some vegetation, I’m okay with it,” said Martin. “I don’t want to look out my window at ugly stuff. Who does?”

Joe Davis, who farms on family land around the land that’s being optioned, was against it for a few reasons — the main one being that the project would use prime farmland, driving up rental prices for the remaining land as supply lessens and demand doesn’t.

He’d prefer it was on marginal lands, brownfields — which are contaminated lands identified by the Environmental Protection Agency — or industrial lands.

Because most of the energy would likely go to Indianapolis, he’d like to see southern Indiana reclaimed coal fields used.

“These lands would be appropriate because they’re not being used for anything,” he said.

He also believed many people came for more information.

“Everybody learned a lot,” Davis said.

More information about the project is available at AppleseedSolar.com.