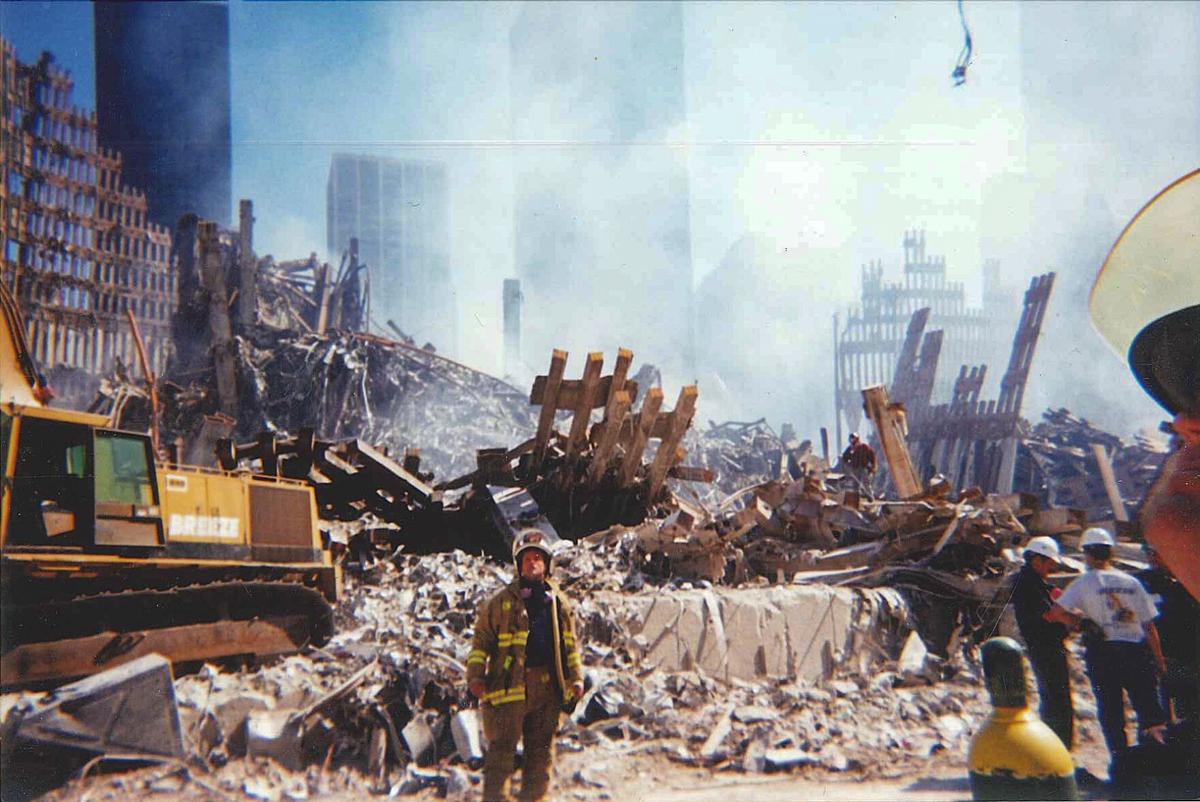 Rubble and debris are seen in New York City after 9/11. 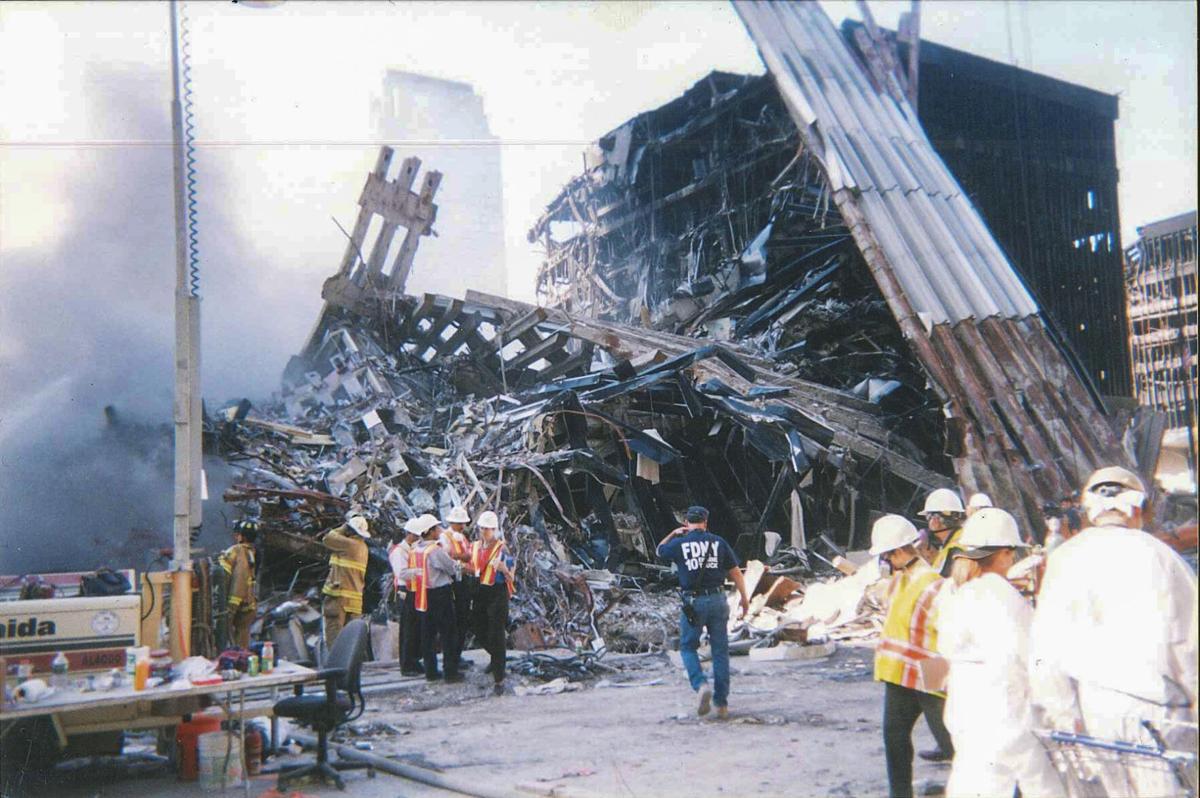 First responders are seen during recovery and cleanup efforts in New York City after 9/11. 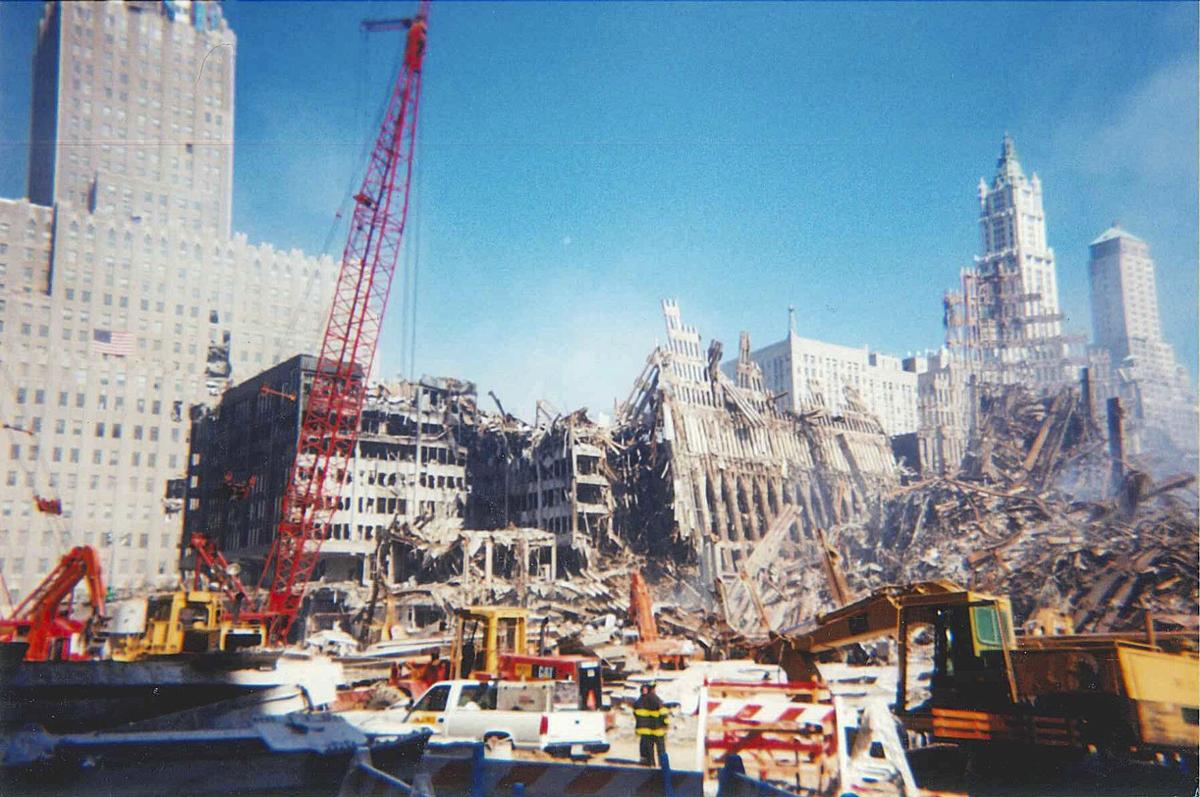 Cleanup efforts are seen in New York City after 9/11. 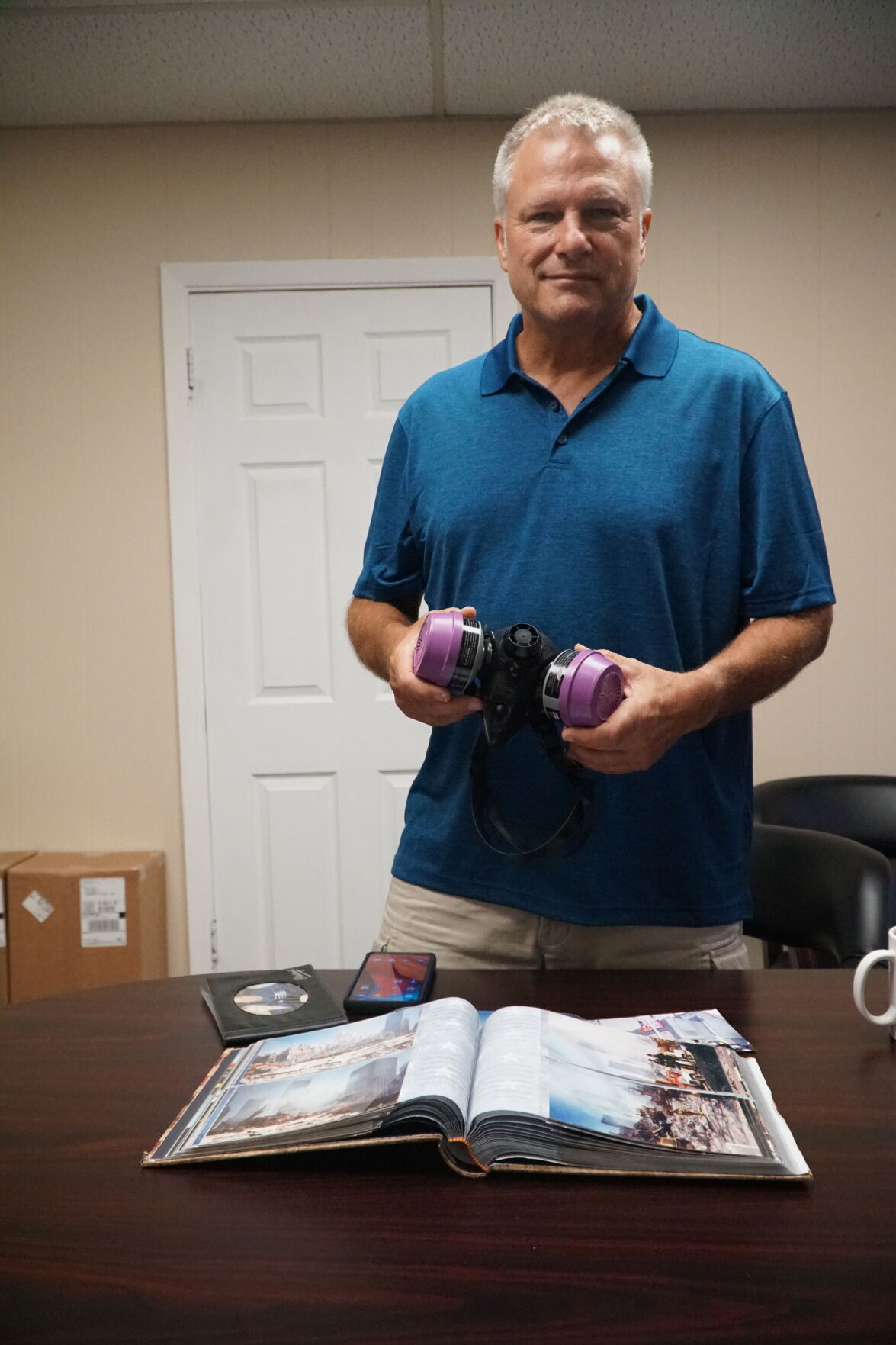 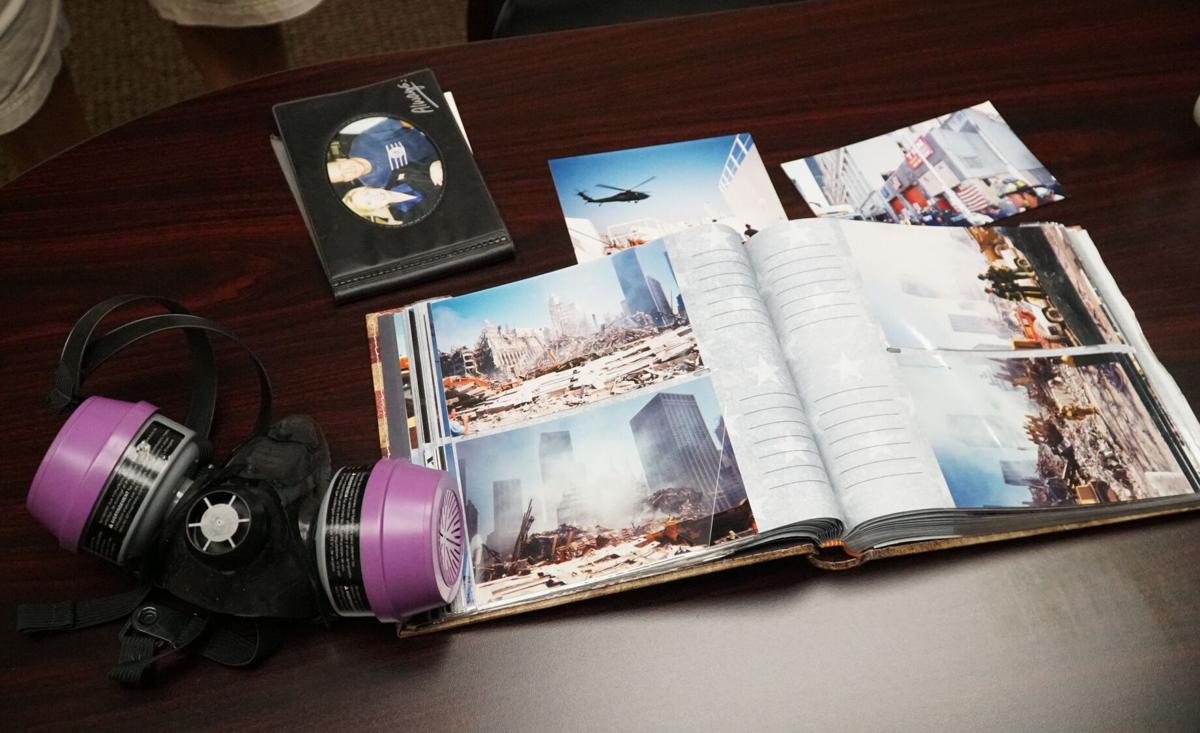 Shown is the respirator that former Logansport Assistant Fire Chief Mark Strong was issued when working recovery at the former World Trade Center site, as well as some of the photos he, Fire Inspector Ted Franklin and Capt. Randy Landis took during their service.

Rubble and debris are seen in New York City after 9/11.

First responders are seen during recovery and cleanup efforts in New York City after 9/11.

Cleanup efforts are seen in New York City after 9/11.

Shown is the respirator that former Logansport Assistant Fire Chief Mark Strong was issued when working recovery at the former World Trade Center site, as well as some of the photos he, Fire Inspector Ted Franklin and Capt. Randy Landis took during their service.

While helping clear the debris from the Twin Towers after the attacks of Sept. 11, 2001, Mark Strong found the broken mouthpiece from a firefighter’s face shield.

It couldn’t have just fallen into the rubble but had to be from someone who responded that first day.

“I’m sure somebody was wearing that,” he said.

That echoed his thoughts from when he first saw the collapse of the World Trade Center on live television.

“When the towers fell, I thought, ‘Good God, do you know how many firefighters died in there?’” he said.

Strong, then an assistant chief with the Logansport Fire Department, was one of three city firefighters who went to New York City about a week after the 9/11 attack.

He and Fire Inspector Ted Franklin owned a box truck from their Universal Fire Extinguishers business and safety company, so the city loaded that with water, welding gloves, first aid kits, goggles and other supplies they heard were needed.

The city had raised $12,000 with a roadblock fundraiser, Strong said.

Strong and Franklin took vacation, and with Capt. Randy Landis, they drove 13 hours straight through to New York City.

The trio spent three days helping clear the still-smoking rubble about a week after it happened.

The need to help and make a difference

Like much of the country — and the world — seeing it all unfold on live television affected the firefighters deeply.

Franklin had returned to the fire station after a call just before the buildings fell, and the television was on.

“Like everybody, you remember where you were at when you heard the news,” Franklin said.

He later heard 343 firefighters died, and he also thought about the equipment they lost.

Because of the business he and Strong ran, he wanted to go out and fill in at any capacity, even if it was filling fire extinguishers around the city.

“That was really the idea behind the trip, to just help out where we can,” Franklin said.

Strong remembers watching the plane crashes on television the day they happened.

After working the night before at the fire station, he was watching the “Today” show live when it happened.

“Like everybody else, I was glued to the TV for 24 hours,” Strong said.

He had contacts in New York and New Jersey he’d met at firefighter events, but “we couldn’t get ahold of any of our friends,” he said.

So he started making plans to go, getting people to cover his shifts.

Landis didn’t see any of it live but was out walking when a friend told him about it.

He went home and watched about 13 hours of newscasts — and got angry at those responsible.

“I just had to go,” he said. “We had to do something. I couldn’t just sit here and not do anything.”

The three drove 13 hours straight through to the site, and even before they arrived in New York state at night, they could see smoke miles away in New Jersey, where — as an afterthought — they stopped to buy disposable cameras.

“You could see it from a distance,” Franklin said. There were spotlights on it.

Landis said, “It was like the sun was coming up, and there was a big fog over the area.”

They were prepared to just drop off the supplies and go home.

“I know they turned away a lot of guys,” Landis said.

Franklin said that when they first got close, the roads were closed.

They talked with people, told them what they were carrying and asked where the best place to drop it off would be.

About 1 a.m., they stopped at a fire station to see where they should go, said Strong.

The firefighters offered them food and a place to shower.

Eventually they were directed to a Navy ship docked and used for living quarters for those involved with the search and cleanup, and they were vetted to work on the site.

“I couldn’t believe they let us in with all the security,” Franklin said.

He chalks it up to their years as firefighters and second job in the fire industry.

Going there the next day, they saw the streets to the site were lined with supplies like they’d brought, Strong said.

They could only be driven within a few miles of the site when they went to help and had to walk the rest, but none of the cab drivers charged them, and the subway was free to them.

The financial district restaurants were also open on the site, feeding the emergency workers meals like lamb chops for free.

The trio had to be vetted to get to the scene: show their licenses, their fire department identification cards and their union cards.

Franklin believes the union cards helped get them in because those in charge didn’t want anyone untrained.

Once let into the site, the three weren’t assigned to a specific place, so they walked around.

“We were kind of on our own,” Strong said. “Of course, we were in awe at first.”

They ended up in a sort of bucket brigade, passing out 5-gallon buckets of debris.

“The day that we arrived was the day they switched from rescue to recovery,” said Franklin.

They didn’t find any bodies themselves, but every time crews uncovered the body of a firefighter or police officer, someone sounded a horn for a moment of silence to show unity.

All bodies — civilian or emergency worker — were treated with respect, he said.

The Logansport men saw a lot that still stays with them.

“It’s something I’ll never, ever forget. I can’t believe it’s been 20 years already,” Landis said. “You could never believe that the concrete and iron and stuff was disintegrated.”

Strong remembers that across the street from the site, St. Paul’s Chapel was untouched and used by the workers as a place to reflect, where another building had a steel beam slicing through it.

Every time the wind blew, papers from the towers rose up and swirled in the air.

St. Paul’s cemetery was a foot deep in financial papers, and in one wind, Strong found a business card for someone whose office was listed as the 107th floor of World Trade Center tower one.

Strong realized that man likely died in the building, unless he hadn’t made it to work that day.

He also found a broken piece of marble from the tower that he put in his coat pocket and still has today.

One thing he didn’t see was any electronics, phones or computers.

“It was all just freaking turned to dust,” Strong said.

He still gets choked up when talking about the site.

Franklin said, “The smell of the jet fuel, it was still there at the time. And I still have a strong memory of that.”

The fire from the crashes smoldered for 88 days, the jet fuel having gone into the underground parts of the building.

Sometimes when rescue teams lifted debris from the piles, the air rushed in and restarted the fires.

“There are so many things that are unique to that situation that you just never forget,” Franklin said. “The dust and the jet fuel are the things most in my mind.”

Overall, the people were friendly and helpful to each other, the men said.

Everyone was helping everyone else.

The three also met then-Senator Hillary Clinton, who represented New York, and then-Senator Ted Kennedy, when they came to talk with the workers.

But they missed former President Bill Clinton the day they arrived.

The Logansport trio stayed just three days to help. Strong said he wanted to stay but had no way back.

Franklin said Strong was the only one without a significant other, and because it was hard to find rental cars in the aftermath, Strong would’ve been stranded.

Franklin had friends who were stranded in Kansas by the air travel lockdown who rented a moving truck to get back home.

Landis said they needed to leave and let some of the others who came help out.

He believes that those in charge were rotating people who came to avoid any of them getting burnout.

The best in the worst

The three also saw that the tragedy brought out the best in people, from the patriotic signs on the roads they traveled and at places where they stopped for gas to the treatment they received in New York City.

Strong said that for months after, people also brought food to the Logansport fire station or just stopped to chat.

“That’s the last time America was solidified on anything I can remember in the last 20 years,” Franklin said.

“It was nice to see everyone getting together in that way,” he said. “It seemed for a few days that everyone was America’s ally, and everybody was proud to be an American.”

Everyone wanted the best for Americans, but that’s different with how fractured the country is now, such as with events in Afghanistan, he said.

“It’s tragic that it took that kind of event to bring us together,” Franklin said.

The men have gone back to the site a few times and have seen the monument now erected there.

“People ought to go see it,” Landis said.

He wasn’t alive when the Japanese bombed Pearl Harbor, but he thinks the two had similar impacts on the country.

“If we ever forget this — you don’t deserve to be an American,” Landis said.