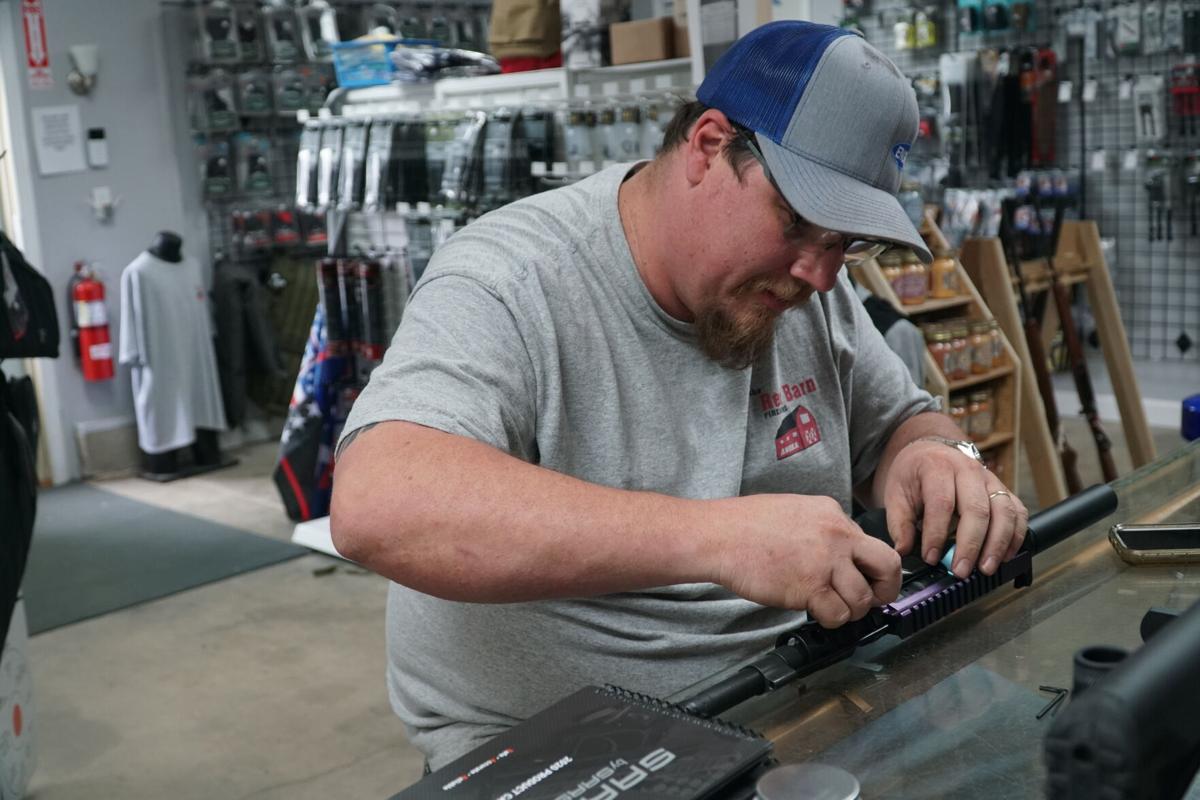 Jason Kite assembles an AR-15 that he’s customized with color at his business, The Red Barn Firearms on U.S. 35. 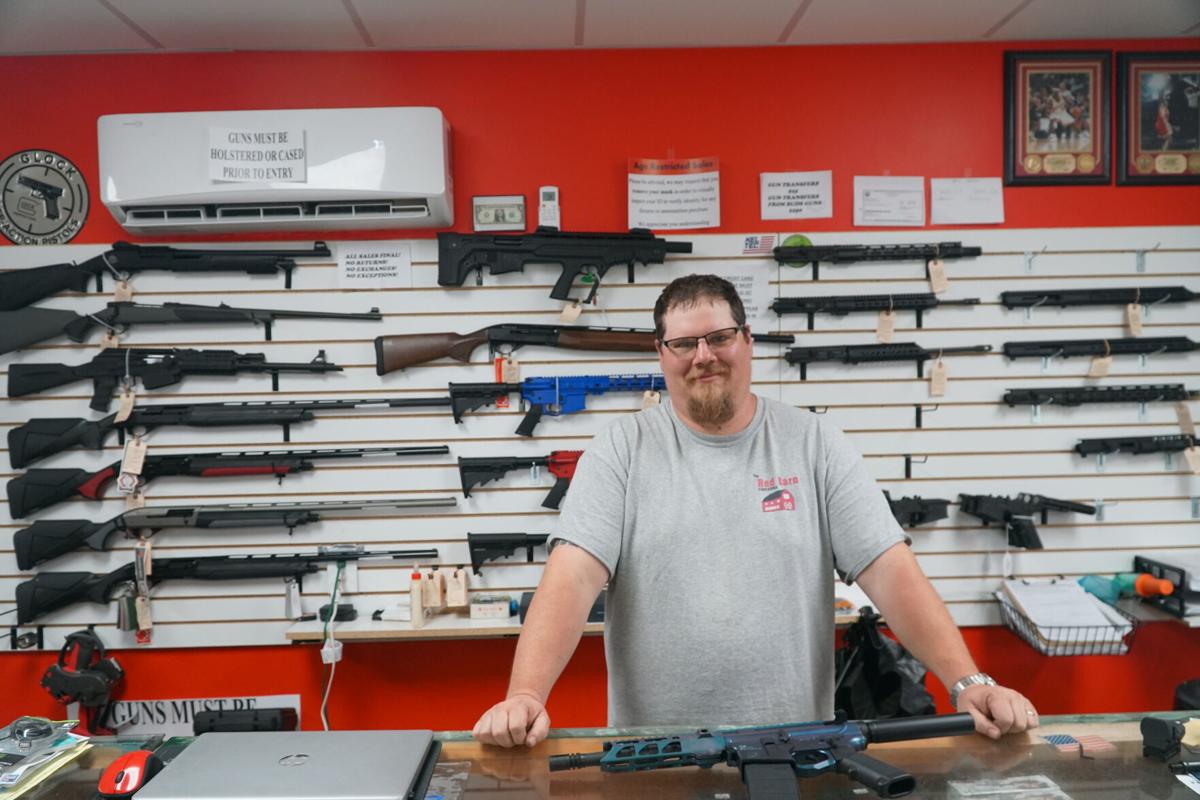 Jason Kite at the counter of his new business, The Red Barn Firearms. 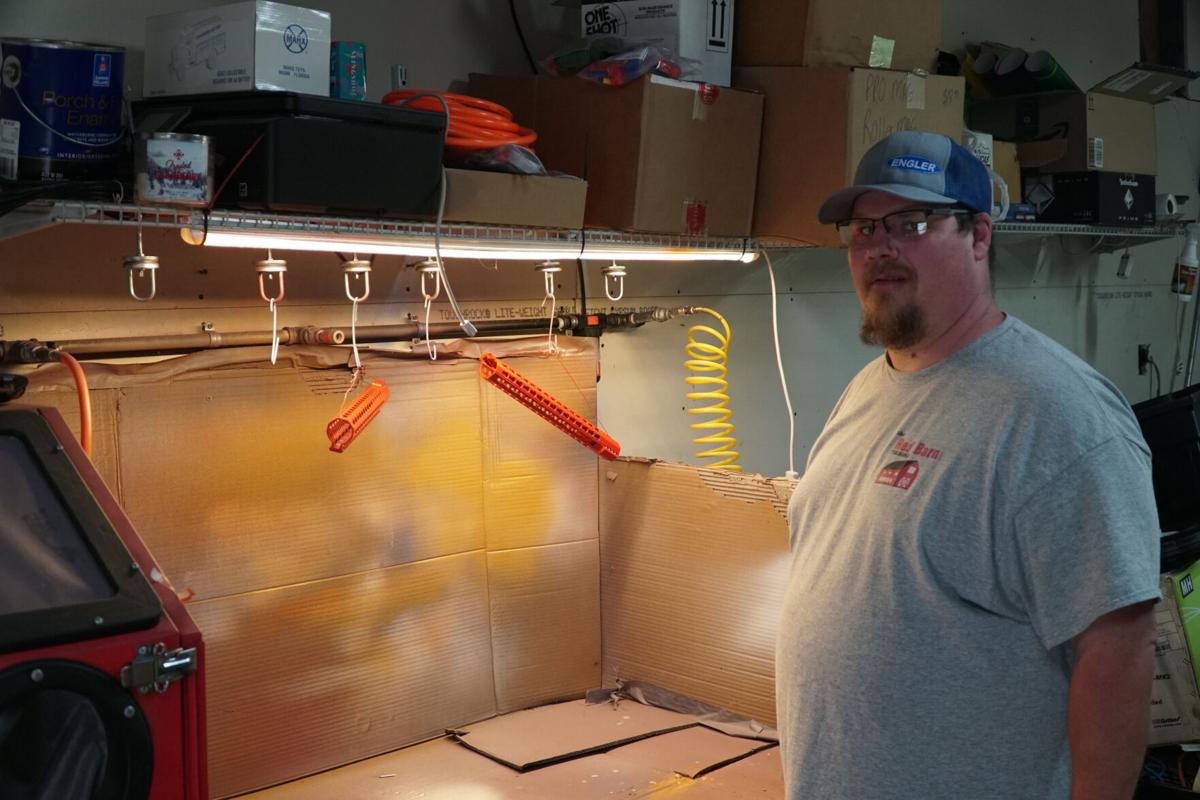 Jason Kite assembles an AR-15 that he’s customized with color at his business, The Red Barn Firearms on U.S. 35.

Jason Kite at the counter of his new business, The Red Barn Firearms.

The COVID-19 pandemic was a big influence on Jason Kite’s The Red Barn Firearms when it opened Dec. 21.

COVID killed that business, he said.

“Auctions closed, and that’s where I got all my stuff,” he said.

However, he’d been selling guns at gun shows since 2018.

The couple started going to gun shows selling leather goods — holsters and belts and things like blankets — as part of the antique business.

It was an expansion from doing festivals and flea markets, he said.

With the antique business closed, Kite was still selling guns when the idea of using the former five-vehicle garage and antique store as a permanent place came to mind.

“I was just doing gun shows, and my wife was getting mad at me for bringing strangers in the house,” he said.

That meant doing a complete overhaul on the building, adding heating and air conditioning and walls while before, they left the antique business with a more rustic look.

Business has been good, although most of his sales come through gun shows all over Indiana now.

“That’s the only way to stay afloat, honestly,” he said.

That wasn’t true when he first opened, though.

“Last year was crazy, but that wasn’t a typical gun year,” he said. “There’s more gun owners now than there were before COVID.”

The pandemic may have had something to do with it, but he saw other reasons people bought at the end of 2020.

There was a new president, people were scared about gun laws and people were concerned about the summer protests in big cities getting violent.

This buying also created a firearm and ammunition shortage, and the pandemic slowed availability down, too, he added.

So when he opened shop, there was a shortage of everything.

However, he had someone in Kentucky who worked with Apache Armaments.

“He kept me stocked with AR-15s during COVID, which was a pretty big help,” Kite said.

Those firearms became his specialty, and he builds them how people want them.

The store is stocked with parts for the AR-15 for people who want to customize their own.

The firearm starts out black, but Kite does custom paint jobs for those who want them, taking the machines apart to color pieces individually.

The more popular colors are copper and a red, white and blue mix, and robin egg blue and pink are popular with women, he said.

Besides the AR-15s, The Red Barn also sells shotguns and rifles and handguns.

He still doesn’t have many handguns, he said. And some ammunition is hard to come by.

However, The Red Barn carries other items besides guns.

Kite also has someone who does repairs on Saturdays and sometimes during the week.

However, those are basic repairs.

The store cannot cut or drill because the business is not licensed for it.

However, it is licensed for suppressors and machine guns for anyone who has the correct tax stamp indicating they can legally own one.

Kite also takes different firearms to individual shows around the state based on geography.

He has learned the preferences for different areas, from Evansville to Crown Point.

The couple does not plan to return to the antique business.

They’ve sold their box truck they made deliveries with, and Heather said they’re totally out of antiques.

Jason said, “I don’t miss heavy furniture lifting. I don’t miss auctions.” Sometimes it was lifting a heavy piece of furniture up three stories for a customer.

Heather said, “It’s easier to move guns than a couch.”