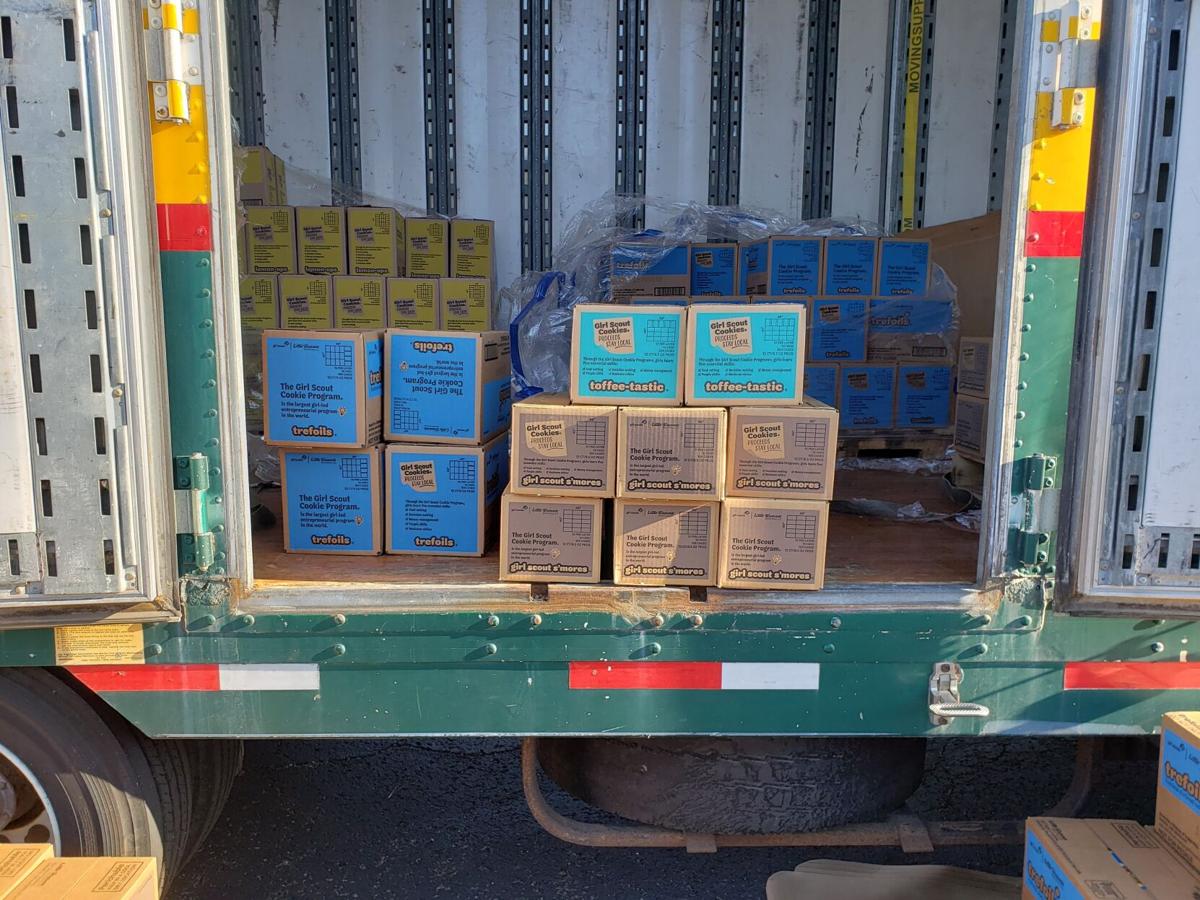 Members of the Girl Scouts of Central Indiana cookie delivery crew dropped off dozens of cases of cookies to local troops in Indianapolis on Thursday. 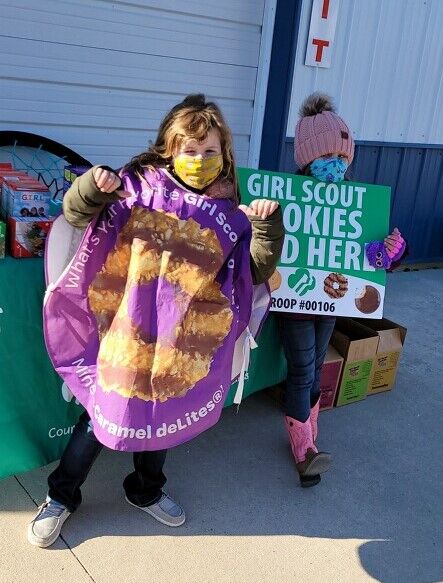 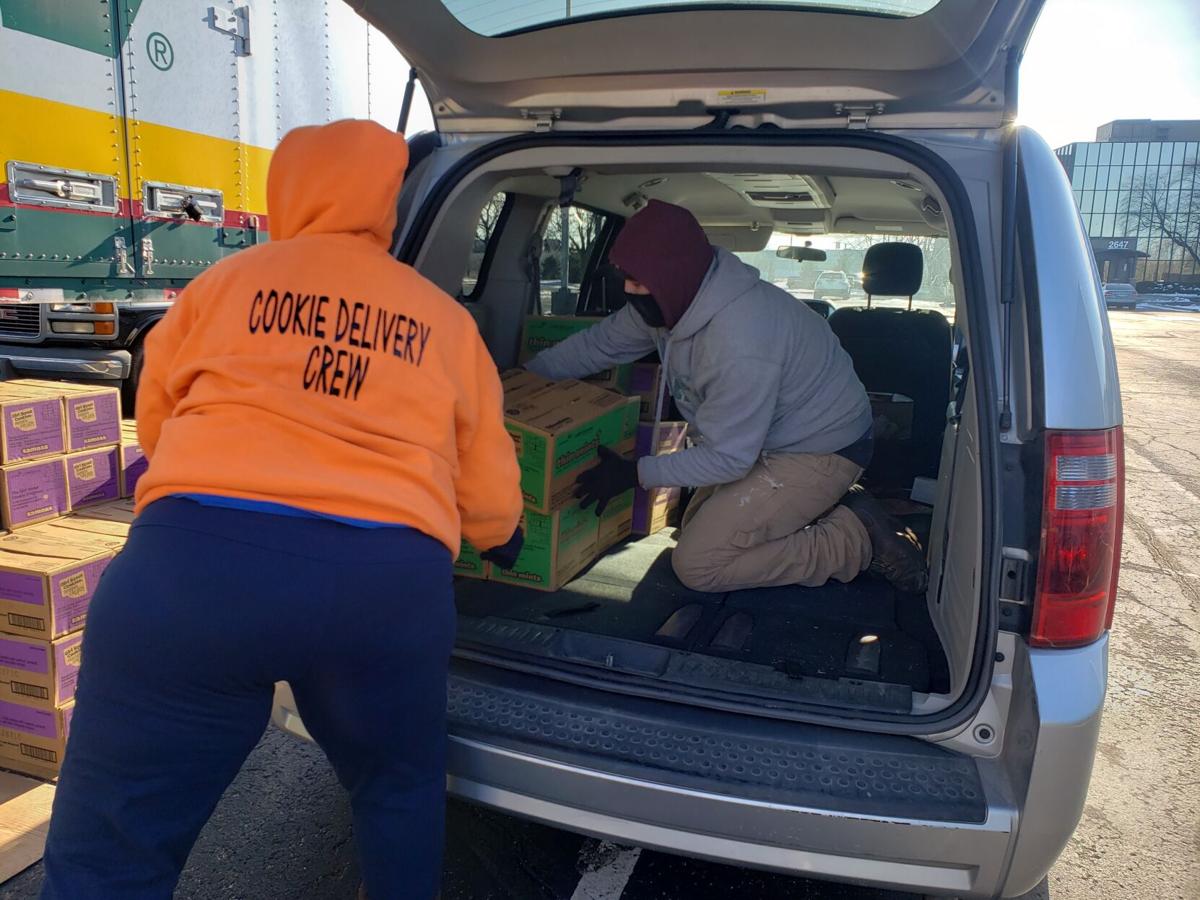 Troop leaders of the Girl Scouts of Central Indiana and volunteers picked up dozens of cases of cookies to local troops in Indianapolis on Thursday.

Members of the Girl Scouts of Central Indiana cookie delivery crew dropped off dozens of cases of cookies to local troops in Indianapolis on Thursday.

Troop leaders of the Girl Scouts of Central Indiana and volunteers picked up dozens of cases of cookies to local troops in Indianapolis on Thursday.

Selling Girl Scout cookies is more than a fundraising promotion.

The sales are designed to teach the girls business and economic skills, and for each year they’re in the organization, they get a badge for another skill practiced and learned during the January-March cookie season.

After impacting the final week of the cookie drive last year, the COVID-19 pandemic has forced the organization to further tweak its practices for the 2021 season, which started the final week of January and runs through March.

Last year sales were cut off just after some Girl Scout troops had ordered new shipments. The Girl Scouts of Central Indiana council decided to buy back 30,000 boxes of cookies so the troops wouldn’t miss out on money they use for camping trips, educational trips and community philanthropic project.

The Girl Scouts of Northern Indiana – Michiana council’s troops had just a bit less left over in 2020, but they reached out to businesses as “cookie sponsors,” donating a box to first responders and critical workers for every box a sponsor bought (some buying 500 boxes).

Now the scouts are expecting some restrictions.

“We’re doing it a little different this year,” said Katie Dawson, Communications Manager for the Girl Scouts of Central Indiana council. “Because of COVID, we’re making sure girl scouts are still able to sell in creative social distancing and contact-free ways to keep themselves and customers safe.”

The Girl Scouts are fully embracing the digital landscape, changing public sales and partnering with Grubhub for delivery in bigger, more urban areas.

The Girls Scouts of the USA already had an online presence for years where troops can set up a page, and individual girls build their own website/page, learning another aspect of business.

“It’s a platform that’s been around for a couple of years, but it’s more important because of COVID,” Dawson said.

Customers then have a choice: they can have cookies shipped to them from the bakery (there’s a small fee) or can have the scouts deliver them contact-free.

The girls who are in scouts, from kindergarten to 12th grade, grew up using the internet, Dawson said. “This is a way for girls to sell in their native space.”

The skills they learn for their badges are goal setting (how many they need to sell for future projects), decision making (where and how to sell and what future projects), money management, people skills and business ethics (for the older girls).

Scouts in the Girl Scouts of Northern Indiana-Michiana council begin training on special iPads and with the codes for the Grubhub partnership, said Faith Van Gilder, Chief Officer of Marketing and Development.

That council is offering Grubhub in Fort Wayne but not South Bend, and the days and hours for delivery are limited, Van Gilder said.

But the scouts receive and place the orders, sending them out along with a thank you note.

The girls have a list of customers they use every year, and they send emails to those on the list with a link to their Girl Scouts personal page, which is not available to the general public for safety reasons.

People in the Northern Indiana-Michiana area can also email iwantcookies@gsnim.org to be connected with a girl.

“You have to buy them from a girl,” Van Gilder said. “The girl is the crucial part of the sale.”

‘Their own little business’

Patty Juby, Troop 00106 leader out of Logansport and Royal Center, said, “It’s kind of like a cookie business for each girl. It’s their own little business.”

The 18 girls in Troop 00106, which is in the Northern Indiana-Michiana council, are setting sales goals lower but raising them as sales continue.

They remain cautious despite results from the new tactics.

“We’re doing a lot more online sales this year than we used to,” Juby said. “It has definitely increased this year.”

Like many troops, they never did much door-to-door sales before the pandemic.

They relied on booths at stores on weekends, especially Walmart and Rural King in the city of Logansport, but both of those stores’ corporate offices have declined to allow booths at the stores this year.

Instead, they’ve been putting booths at smaller stores, one near a busier intersection where people could see still them from far away.

In the smaller Royal Center, they’ve set up a booth in the library parking lot and one at A Team Realty and have been doing it somewhere every weekend except Jan. 23, when it was too cold for the girls, she said.

The troop has gone from 32 to 16 booth opportunities, and they’re also considering going door-to-door in Royal Center, pulling cookies with a wagon.

And by mid-week, the troop’s online direct sales were 10 times as last year at the same time.

“It’s just at a different level,” Juby said. “You think outside the box.”

Sales will fall for some troops

Troop 1285, one of five Girl Scout troops in Monticello, is also thinking outside the box.

Right now, they’re waiting to hear from some stores that haven’t cancelled the booths, but they’ve also ordered about 40% fewer cookies this year, Hatfield said.

Their biggest hit is the loss of the Home and Garden Show in Monticello, which was also cancelled last year at the last minute, leaving them in 2020 with the several hundreds of boxes they usually sell and in 2021 without their best venue.

Now they’ll have to rely on Grubhub and the remaining booths, although they travel as far as Tippecanoe Mall (a few hundred boxes in sales) and Lowes in Lafayette, about 45 minutes away.

“The theme this year for cookies sales is ‘we can do this’ or ‘we got this,’” said Janet Foulks, the troop co-leader.

To stand out as a booth, they’re planning a cardboard box “vending machine” Hatfield saw online.

It will allow the customers to exchange cookies and money or credit cards with customers through a barrier, and it’ll allow for the girls to have a heater inside to stay warm, she said.

Social distancing a must

The Central Indiana council started doing booths Jan. 19, and those are required to adhere to rules of social distancing, including wearing masks and using gloves, having fewer girls, being outside when possible, having hand sanitizer and accepting credit and debit cards.

Dawson said that in the final week of last year’s sales, troops in the Central Indiana council were supposed to occupy 420 booths in 45 counties but had to cancel.

In Greentown, Troop 560 didn’t have that problem last year because co-leader Paige Cramer was a nurse, so they met their goal and tapered off to the end, said Co-Leader Danielle Rush.

This year is not as good.

They’re still talking to places about booths and aren’t sure what booths can look like.

Hydration Station drive-thru is partnering with them by developing a cookie-inspired shake for when the girls set up a booth at their drive-thru, said Rush.

Parents are also more willing to participate this year, and the troop is also being more conservative in what they order to sell, she added.

Along with the pandemic, something else could affect sales.

The Girl Scouts also received some bad publicity this year because the palm oil used by some of the companies that bake their cookies.

In December, the Associated Press wrote about child labor in Indonesia and Malaysia, which supply 85% of the world’s palm oil, the most consumed vegetable oil.

“An Associated Press investigation found most earn little or no pay and are routinely exposed to toxic chemicals and other dangerous conditions,” according to the Dec. 30 article. “Some never go to school or learn to read and write. Others are smuggled across borders and left vulnerable to trafficking or sexual abuse.”

“In some cases, an entire family may earn less in a day than a $5 box of Girl Scout Do-si-dos,” it stated.

The situation was brought to the attention of the head of the Girl Scouts of the USA by girl scouts who were concerned and have stopped selling the cookies.

The two local councils declined to comment on whether the controversy would also effect sales.

Dawson did respond with the national organization’s official statement.

“Collectively, Girl Scouts, our members, bakers and supporters are investing in the betterment and development of young people around the globe,” according to a statement issued by Girl Scouts of the USA. “These complex and hugely important issues require the cooperation of many parties to solve. We have and continue to work with our bakers to increase the transparency, sustainability and ethical behavior of our production lines and sourcing.”

“If certain suppliers are not following ethical practices, we expect our bakers and the Roundtable on Sustainable Palm Oil to take action quickly to rectify those exceptions,” it continued.

Despite the hardships of selling this year, Dawson remains optimistic.

People seem to want the cookies more because of the pandemic.

“We’re trying to make it as easy as possible for those people to get those cookies,” she said.

Van Gilder said that economic times are hard, but Girl Scout Cookies aren’t as expensive a comfort or donation as other things.

She’s not counting sales now, though.

“We’ll just wait until the sales come in at the end of March,” she said.